The most powerful Chinese smartphones according to AnTuTu per month september 2020. First place surprises

We have another new AnTuT Benchmark ranking for last month - septhuman. This time he will show us the most powerful flagship smartphones and also smartphones of the upper middle class.

The first place in the AnTuTu rankings will surprise you

After 2 weeks of the current month was AnTuTu rankings updated again with the latest models. This time we will find out who in a month septhuman received 1. the place in the ranking of the most powerful smartphones.

Certainly the biggest difference can be observed in the first 3 places compared to the month of August. A new Chinese smartphone called IQOO 5 PRO for he has recently seen the light of day, and at the same time placed directly on 1st position overall ranking.

Along with the Pro model, the classic was of course also introduced Article 5, who placed just behind his more powerful brother. Both models offer a powerful processor from Qualcomm - Snapdragon 865.

In the ranking, smartphones are listed in the case of both the classic and the Pro model in the configuration 12GB RAM / 256GB ROM, both exceeding the value 660 000 points.

IQOO 5 and iQOO 5 Pro thus moved the recent king of the overall ranking, which was a smartphone Xiaomi mi 10 ultra except for 3rd place. The latest achievement from Asus in the form ROG Phone 3 or direct competition in the form of Lenovo Legion Duel.

Furthermore, of course, there is no lack Oppowhich has its models Find X2 a X2 Pro placed at the end of the ladder. The overall TOP 10 is completed by a smartphone Xiaomi Mi 10 Pro, which, however, still exceeds the limit of decent 600 000 points. 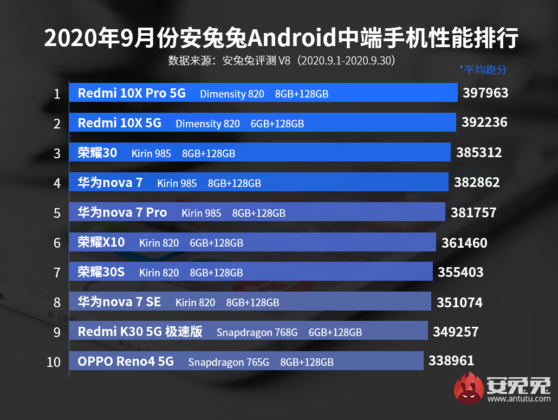 As for the upper middle class ranking, the smartphone takes the lead here Redmi 10X Pro 5G. The following is a classic 10X 5G a model that, like the Pro model, is approaching the limit 400 000 points.

Relatively diverse representation of the company Honor only the manufacturer adds Oppo. With a model Reno 4 5G placed on the last, 10th place overall ranking.

So we'll see how the cards are shuffled this month and how the new AnTuTu leaderboard will look like next month.

The Smartisan brand announces the return: The flagship Nut 4 Pro will receive a 108 MPx camera and 16 GB of RAM