The important information is that this is not a random test of the device. Within the AnTuTu service, tests are collected from users and a ranking is created on a sample of 1000 tests on a given smartphone model. In the ranking we can also see the representation of several Chinese smartphones from the brand workshop Huawei or Xiaomi respectively Redmi.

The most powerful flagships

The model became the leader of the flag ranking OPPO FIND X2 PRO with a Snapdragon 865 processor and a 12 GB RAM + 256 GB configuration, with which it gained a total of 613 points. It is in second place Oppo find x2 with the same processor. In the configuration of 8 GB RAM + 256 GB he gained 606 points.

The third resp. the imaginary bronze place was subsequently occupied in July by a smartphone with a sign Redmi K30 Pro. It will offer a Snapdragon 865 processor and gained 12 points in a 512 GB RAM + 601 GB configuration. 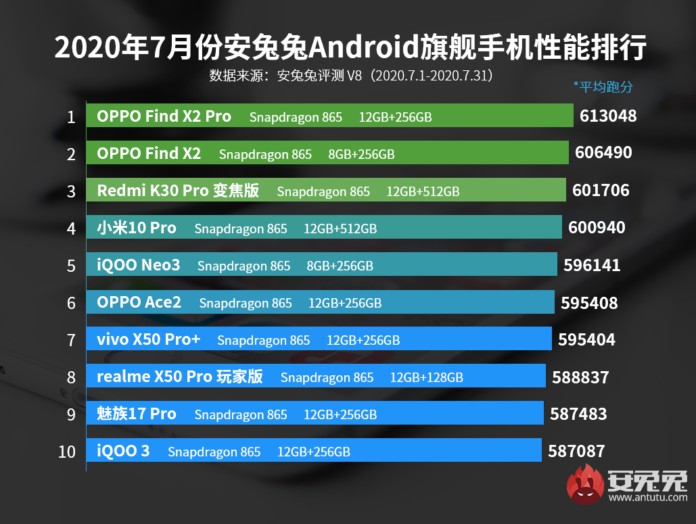 It is then in eighth place Realme X50 Pro with a gain of 588 points. The ninth place was taken by the model Meizu 17 Pro with a total of 587 points. The ranking closes the model iQOO3 with points 587 087.

In third place is a smartphone with a sign Redmi 10X Pro 5G, which contains the same Dimensity 820 processor and in a configuration of 8 GB RAM + 128 GB, received a total of 397 points. 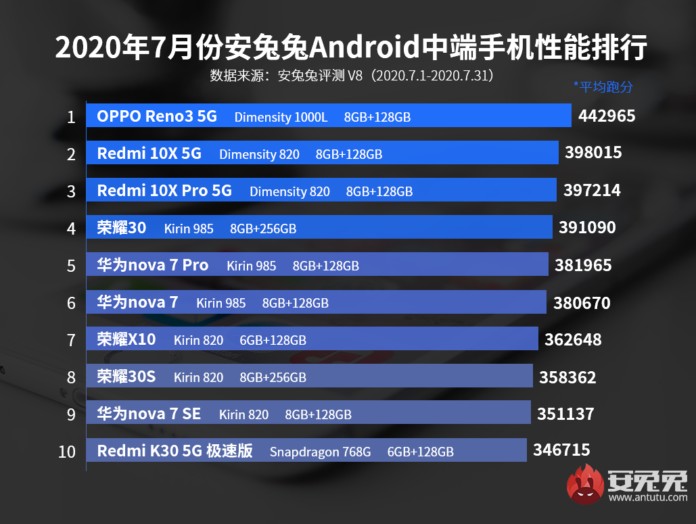 He placed eighth Honor 30S with a gain of 358 points and just behind him in ninth place subsequently Huawei Nova 7 SE with a total of 351 137 points. This ranking closes the smartphone in tenth place Redmi K30 5G with a total gain of 364 points.