Realme X3 officially: New with 120 Hz display and Snapdragon 855 Plus under 300 euros

Spoločnosť Realme officially brings a new smartphone with a 120 Hz display and the flagship Snapdragon 855 Plus processor. Ide o Realme X3. Along with this novelty, we also know information about the smartphone Realme X3 SuperZoom, about which we also brought you an article. You can find him at the following link.

The Chinese manufacturer organized an official event in India, where he presented a pair of models Realme X3 a X3 SuperZoom. While the SuperZoom was previously introduced, even on the European market, the novelty is the very well-equipped model Realme X3. The equipment of the two models is practically the same except for the cameras.

The smartphones offer a 3D curved glass on the back and a large up to 6,6 ″ IPS LCD display with a space that contains a pair of front cameras. The display offers Full HD + resolution, 20: 9 aspect ratio and Gorilla Glass 5 protective glass. There is no refresh rate at the level 120 Hz, while the display covers up to 90,5% of the front wall.

The equipment also includes a flag processor Snapdragon 855 Plus and LPDDR4X multi-capacity RAM. In both cases, the internal storage is of type UFS 3.0 along with support for Turbo White and HPB, increasing overall performance and reducing power consumption.

There is also a battery with capacity 4200 mAh, along with 30 W fast (cable) charging. According to the manufacturer, it only takes 3 minutes to fully charge the X3 and X55 SuperZoom. In terms of software, there is an Android 10 system and a graphical superstructure from Realme.

The difference of the Realme X3 model is a different grouping of rear cameras. There are four rear cameras, namely a 64 MPx main sensor (Samsung GW1), but also a 12 MPx (51 mm) telephoto lens, an 8 MPx ultra-wide angle lens and a 2 MPx macro lens. There is also Nightscape mode and also Starry Mode. 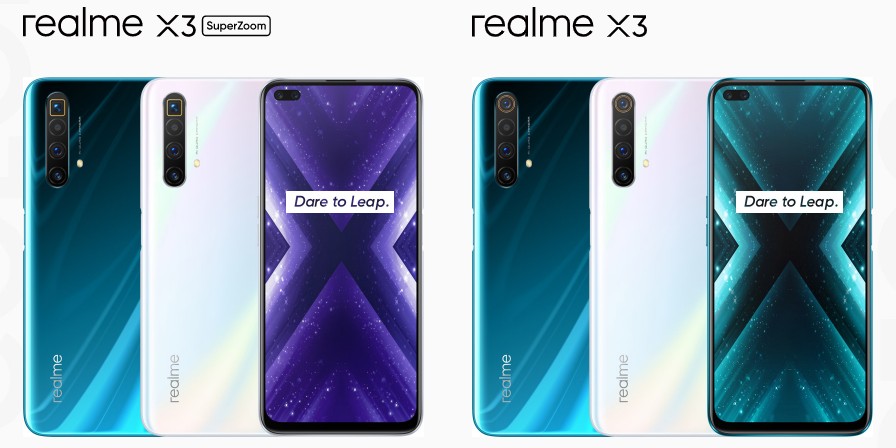 In the display, specifically in the shot at the top, there is a main 16 MPx front camera, which is also complemented by an 8 MPx front ultra-wide angle lens for quality "selfie" photos.

Other features of the X3 series include dual 4G VoLTE, Wi-Fi 802.11ac, Bluetooth 5.0, dual GPS, a USB type C connector for charging, super linear speakers type 1216, as well as a fingerprint reader located below the surface of the display. On the other hand, there is no 3,5 mm audio connector.

Both models X3 and X3 SuperZoom they come in color versions of Glacier Blue and Arctic White. The start of sales in the Indian market will take place on July 30 via the Realme.com website and the Flipkart platform. We are curious when smartphones will appear in the offer of international retailers.

Huawei is preparing a new smart watch Mate Watch with the HarmonyOS 2.0 system

Elephone W6 is another smart watch inspired by Apple Watch. They offer advanced measurement and the price of a fitness bracelet