decent endurance on a single charge

higher weight and larger dimensions can be a problem for someone

the backlit control panel could be better used

The Tronsmart brand focuses mainly on the audio sphere. It has a number of wireless headphones in its portfolio, whether they are small sockets or large over-the-head headphones. In addition to them, they also produce portable speakers, where you have a varied selection. We bring you an exclusive review of an absolute novelty - Tronsmart Element Mega Pro. 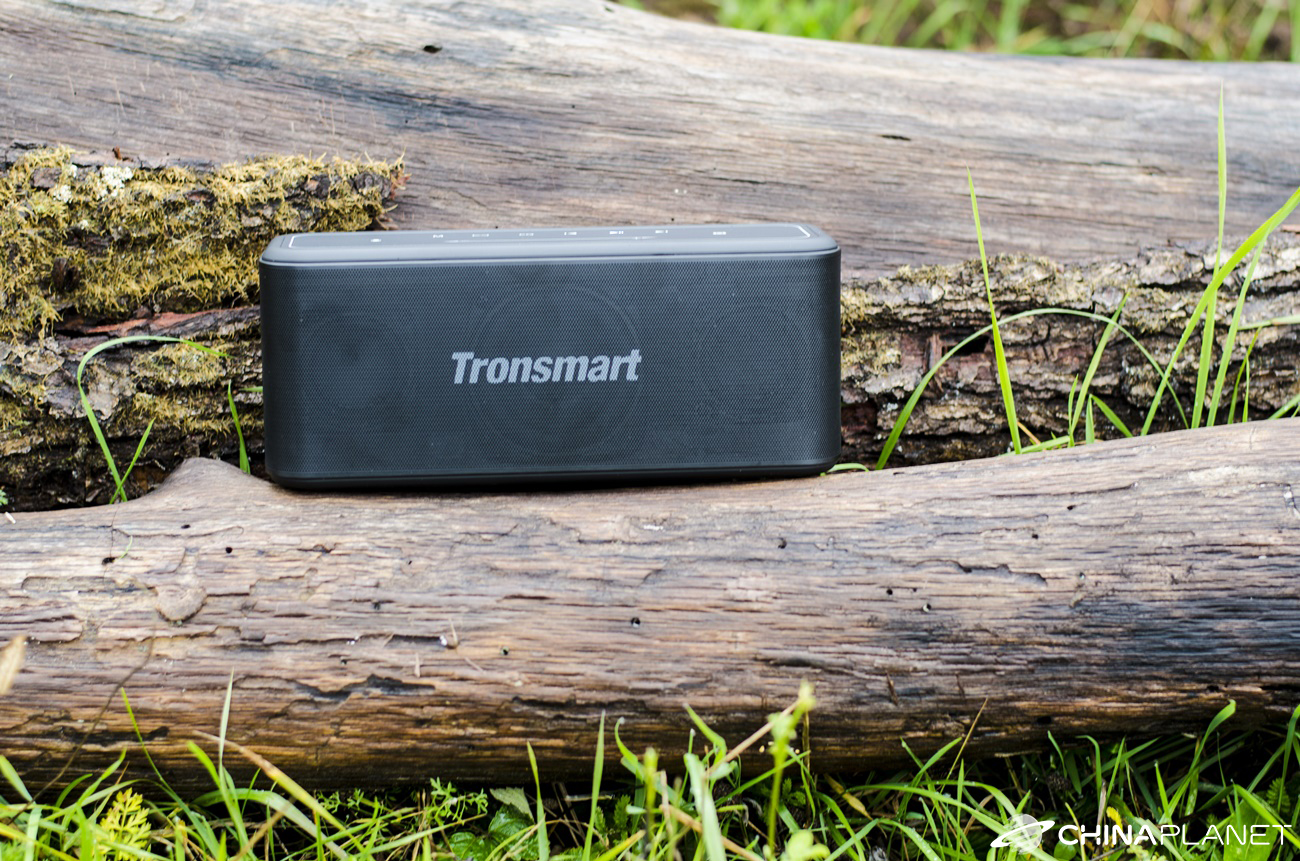 The Tronsmart brand follows a similar path as Xiaomi or BlitzWolf. It offers products with a very good price / performance ratio. This is also the case with speakers. Element Force whether Element T6 Max have become very popular pieces thanks to good sound quality while maintaining a low price. You don't have to invest a lot of money and you get quality products.

Tronsmart launched the Mega model in 2017. It was a 40 W portable speaker with dimensions 193 x 57 x 82 mm, support for Bluetooth 5.0 and NFC. It has two batteries with a capacity of 3300 mAh, which ensured a lifespan of up to 15 hours. Thanks to the TWS function, it was possible to pair 2 speakers.

You can order Tronsmart Element Mega Pro from the Chinese e-shop Geekbuying. The speaker is available from German aj Spanish warehouse for a very good price. It will be delivered to you within 2 - 7 working days from dispatch. 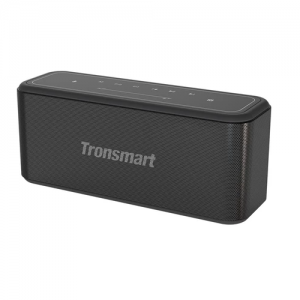 We got it in the editorial office before the actual launch. We have been testing it for a long time and now we bring you our evaluation. Is it worth buying or is it a waste of money? Read on to find out.

Tronsmart Element Mega Pro comes in a box with the traditional colors of this brand - white and purple. It is packed very well, the box is strong enough to protect the speaker. 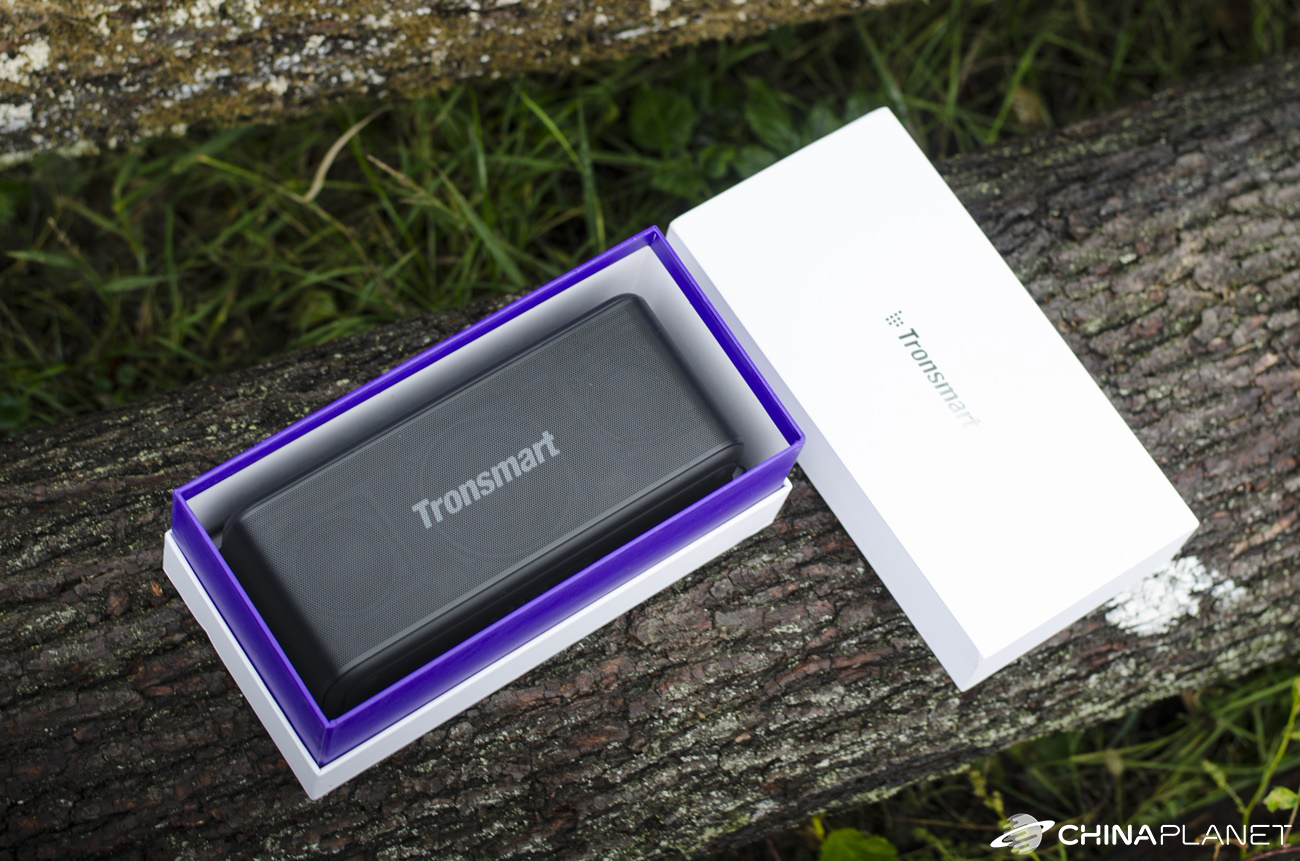 Even when the package is delivered, you will feel that it is not a small speaker that you hide in your pocket. The Tronsmart Element Mega Pro has its weight and is not one of the smaller portable speakers. But you won't fool physics, and if you want a speaker with quality sound, it has to be a bit bigger.

Packaging is relatively simple. You will find a speaker wrapped in plastic foil, a USB-C cable, an audio cable with a 3.5 mm jack connector at both ends (so-called AUX cable), a speaker pocket made of synthetic material and instructions with a warranty card. 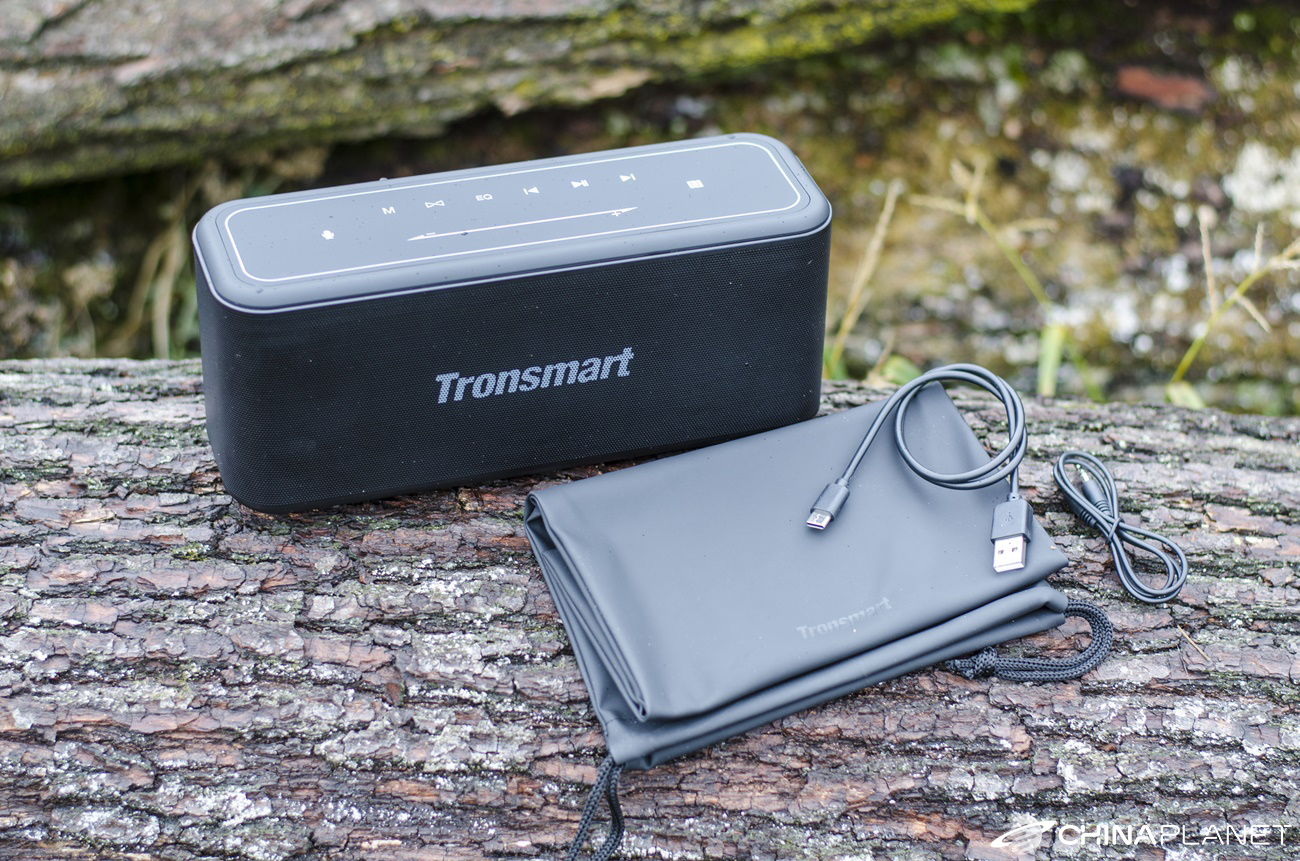 We didn't like that both USB-C and AUX cables are very short. They only have 0.5 mwhich is really little. We would welcome significantly longer cables when charging and especially when playing music via AUX. Since USB-C is now more or less the standard for phones, we used a cable from a smartphone to charge.

Quality of workmanship, materials and control

The Tronsmart Element Mega Pro has dimensions 250 x 82 x 104 mm. It thus increased significantly between generations. Its weight is 1780 gwhich is quite a lot more. It's definitely not a speaker that you take with you wherever you go. The dimensions are quite tolerable, but its weight is not negligible at all. 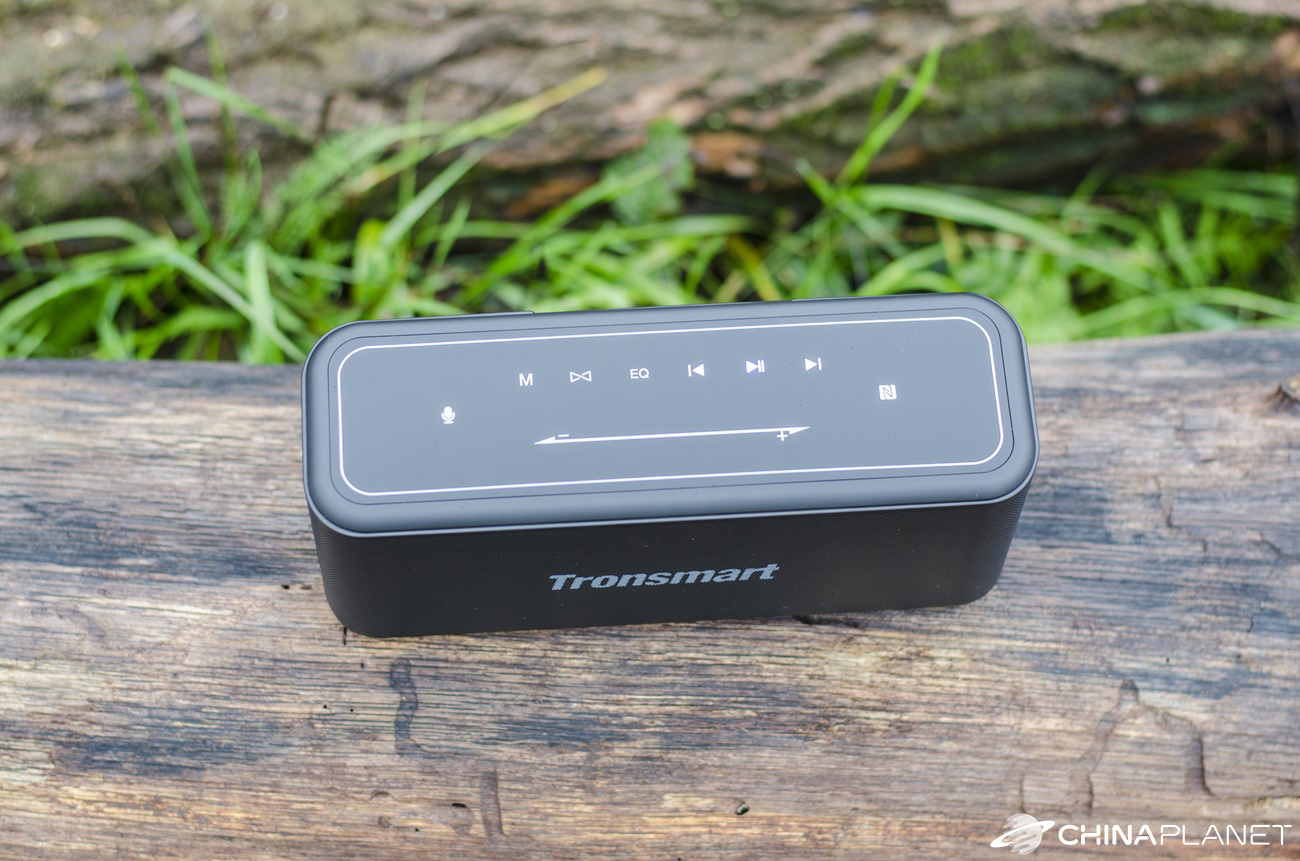 The speaker looks very massive and high quality. There is a metal grid around the perimeter of the whole structure. The construction itself is made of plastic. In addition, the bottom and top are rubberized and pleasant to the touch. At the bottom are 4 rubber feet, which should prevent the speaker from moving spontaneously during music playback.

The upper part is also a control panel. He is backlit, glows white, but its potential is not fully exploited. Since there is a backlight, we could imagine the possibility to change its colors or switch between different effects. 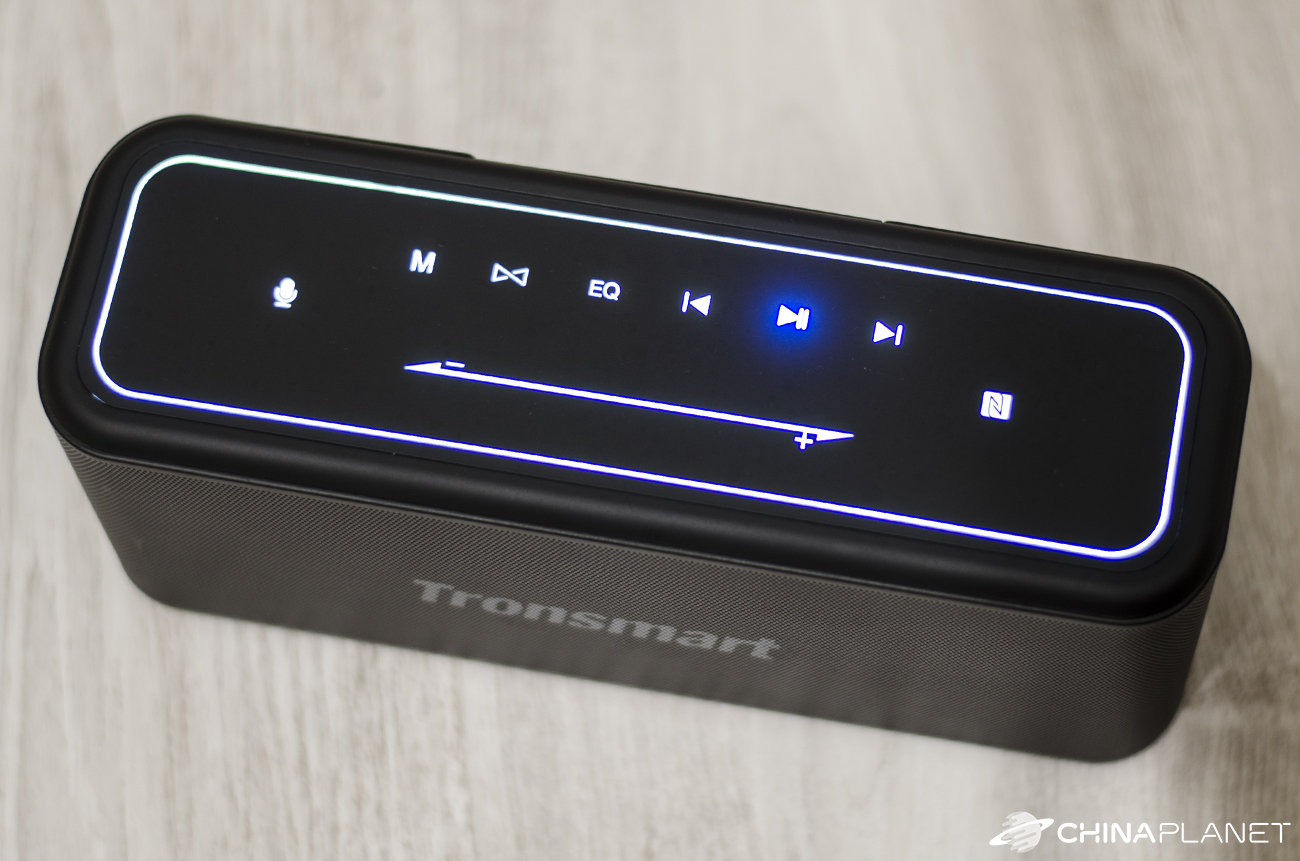 The volume control buttons are connected by a backlit line at the end of which are the symbols + and -. It still shines, but it's a pity that the manufacturer did not make better use of this element. The line could be highlighted according to the volume level, so we would at least know what the current volume is.

All buttons respond well to touch and we did not notice any problems in this direction.

There is an on / off button on the back. There are also individual ports, hidden under a rubber cover. You will find classic USB, USB-C, 3.5 mm jack for AUX and a slot for microSD card. 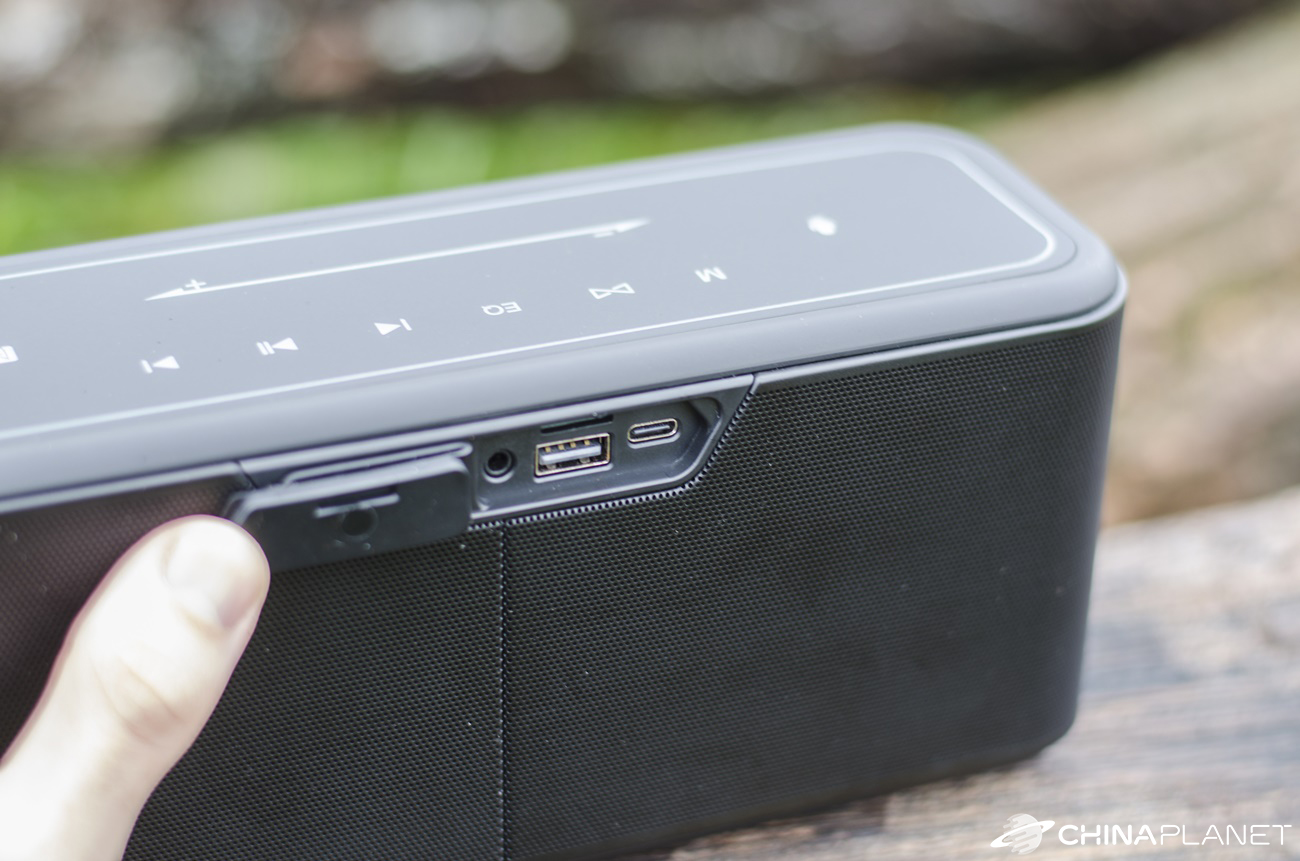 First turn on and pair

The speaker is switched on with the button on the back. When turned on, it beeps and you can start pairing it with your mobile phone. There are two options. The speaker can be paired in the classic way via Bluetooth, when the speakerphone is searched for on the mobile phone and pairing starts. But the second way is easier and faster, using NFC. 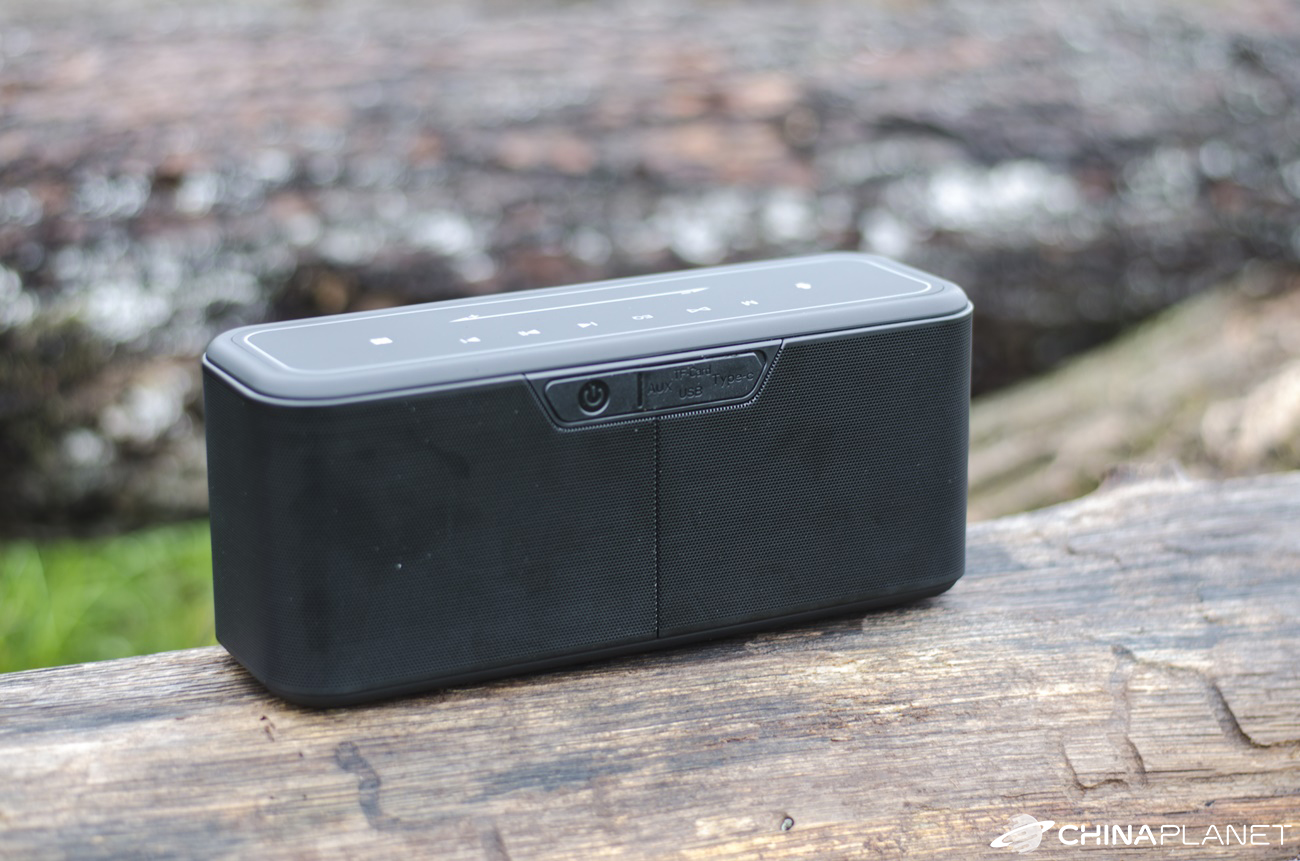 Simply attach an NFC-enabled phone to the NFC tag on the top and you will be prompted to pair it immediately. This process is complete in a few seconds.

If you want to reset the speaker, just hold down the button marked "M" until you hear a beep. We reset it this way and paired it with NFC.

The Tronsmart Element Mega Pro has up to 60 W. It contains special technology SoundPulse from Tronsmart, which provides better sound.

It dominates inside subwoofer located in the middle. Next to it are on both sides tweeters and in the back is still passive bass diaphragmwhich emphasizes the bass. If you would like to see exactly what is inside the speaker, we recommend watching the following video, in which it will be completely disassembled.

The speaker pleasantly surprised us with the sound quality. The manufacturer states strong bass, so we had some worries about whether it would be too overcooked, but our worries were not confirmed. The sound is balanced and its presentation is good in different genres.

There is an equalizer that has 3 modes: Depp Bass, Vocal and 3D. The EQ button changes colors depending on which mode is on. We listened best to music with Deep Bass on. 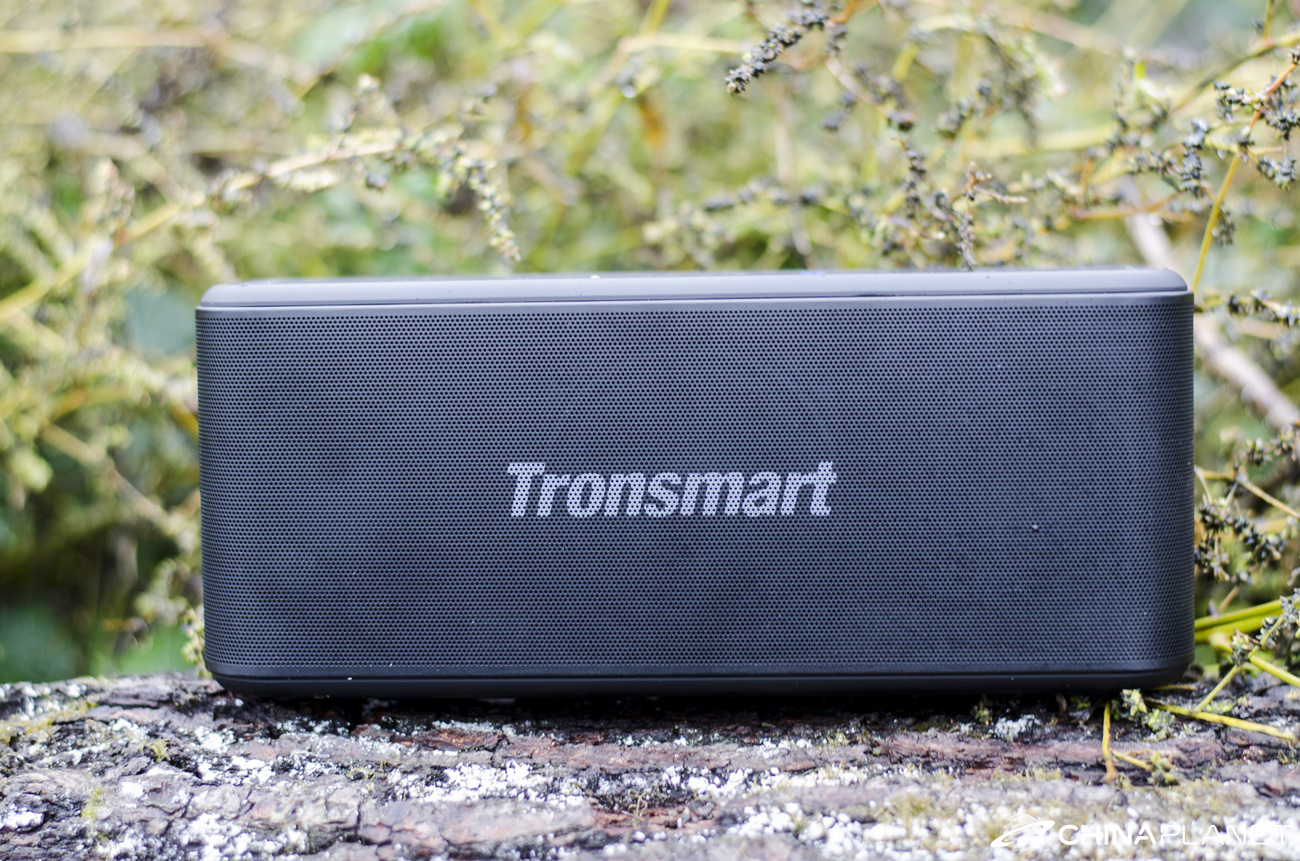 We were very satisfied with the sound. In the past, we also had the opportunity to try the Tronsmart Element T6 Max and Tronsmart Element Force. In our opinion, Mega Pro plays the best of the named. The T6 Max is too overcooked, which cannot be said about the Mega Pro. You can find a comparison with Element Force below.

We tried to play different genres, we even used the speaker for Xiaomi TV instead of the sound bar and managed everything with an overview. The volume is sufficient, verified by neighbors. 🙂 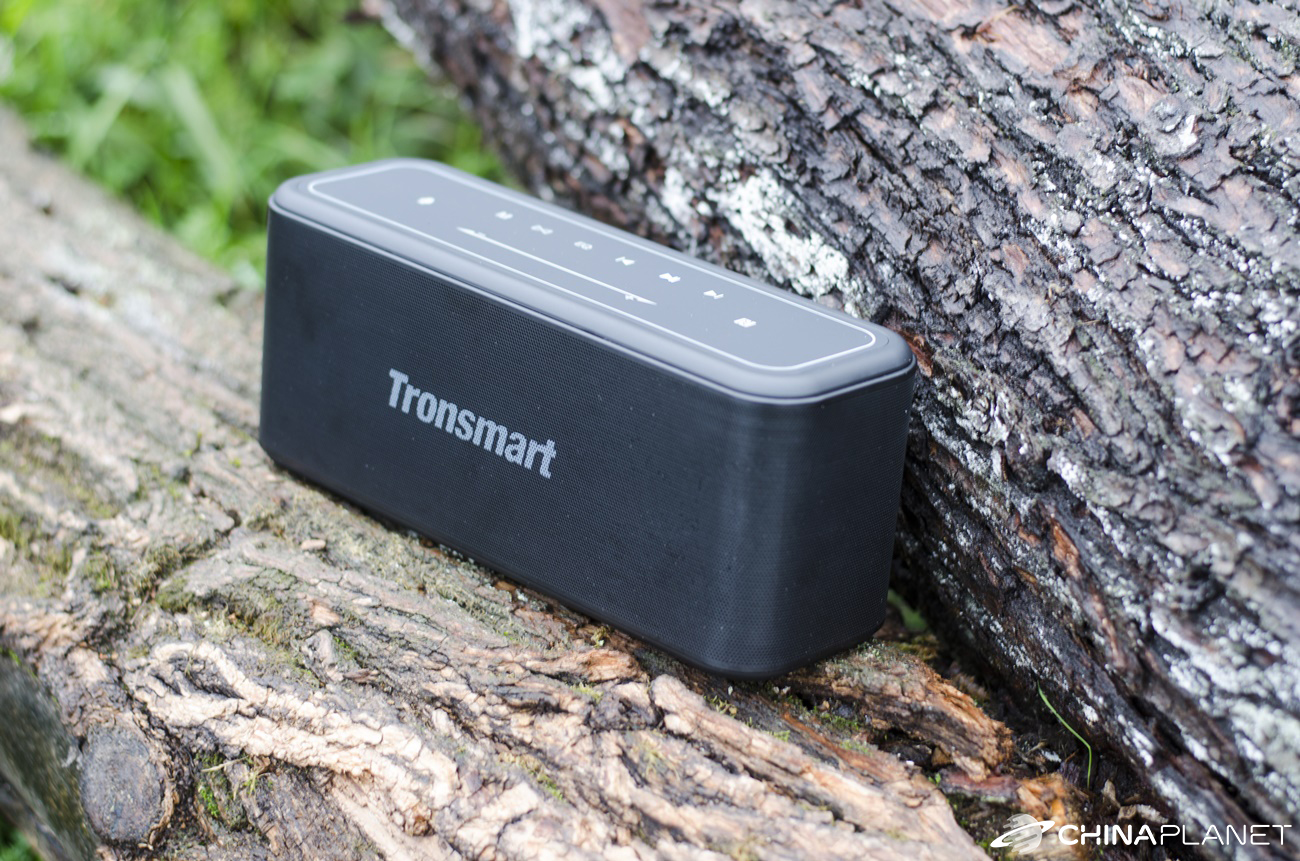 It also offers functionality TWS, thanks to which you can synchronize 2 Tronsmart Element Mega Pro speakers with each other. You get real stereo sound.

Pairing two speakers is easy, just turn on both speakers and press the TWS button on the top panel on one. The speakers then automatically establish communication with each other. Unfortunately, we only had one speaker available, so we haven't tried this option. However, we assume that it works properly, as even with a pair of Element T6 Max speakers, the TWS function went smoothly.

Because we had even older and smaller ones available during the review Tronsmart Element Force, we compared these two speakers, although we are aware that they are not in the same price or size category. Since the Element Force is a relatively popular model, we were interested in the difference in sound quality. However, if it is a speaker, for a better idea it is good to compare it with something. 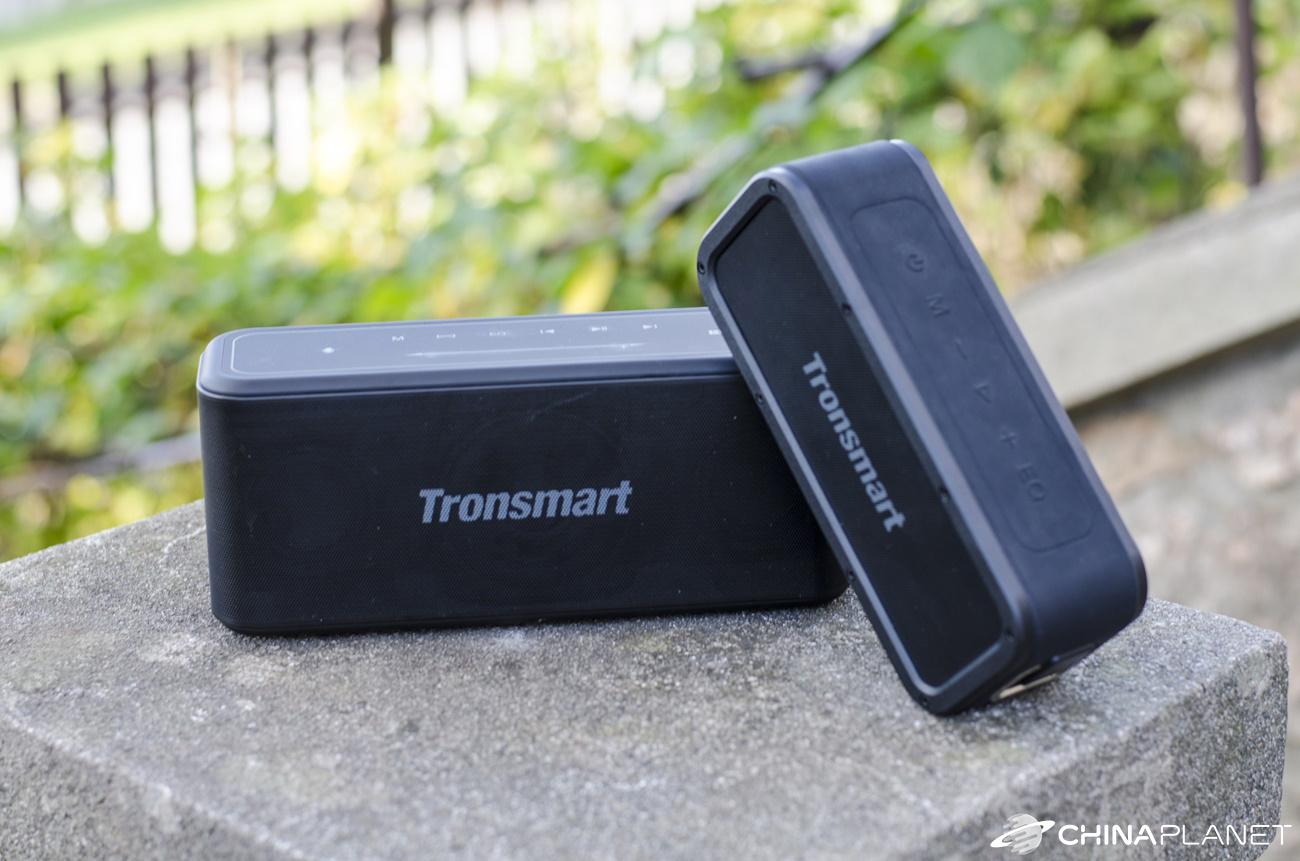 From the photos you will have a better idea of ​​the size of the Mega Pro speaker. At first glance, it can be seen that the Element Force is significantly smaller and more suitable for frequent carrying. It is exactly 1 kg lighter, as Element Force has 780 g and Mega Pro to 1780 g.

Element Force has power 40 W, Mega Pro has 60 W. There is a significant difference in terms of sound. Element Force has 2 wideband speakers in the front, between which there is a passive bass diaphragm. Such a membrane is also located on the back. 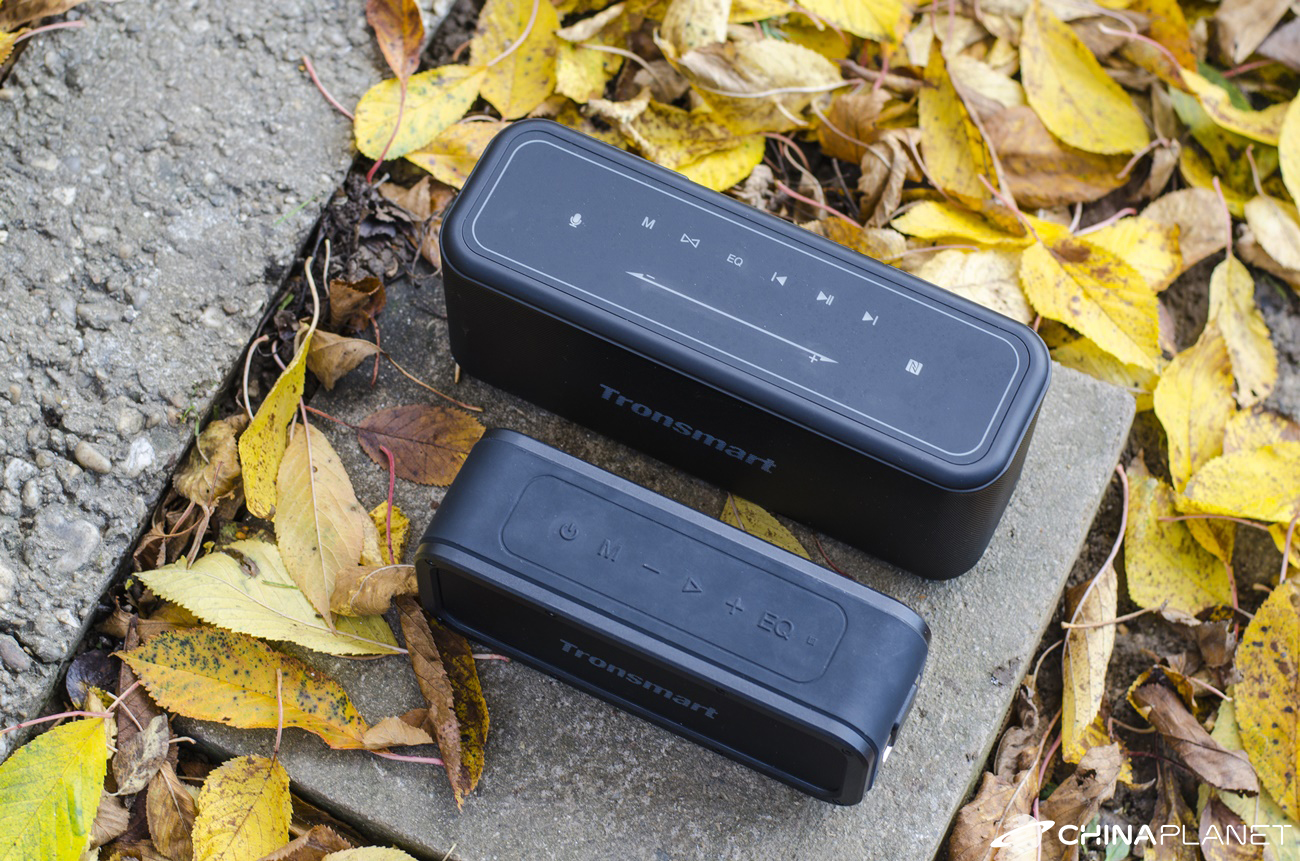 As mentioned in the article above, the Mega Pro has completely different speakers. There is a subwoofer and 2 tweeters on the front. There is a larger passive membrane in the back.

As soon as you unpack the Tronsmart Element Mega Pro, you will notice a large Power Bass inscription on the box. To our surprise, however, it has more pronounced Element Force bass. This is caused by wideband speakers that move up to 2 passive diaphragms, which amplify the bass. However, this speaker has less significant pitches. Wednesdays are nice, but the bass dominates here.

On the other hand, the Tronsmart Element Mega Pro has beautiful expressive highs, but less distinctive bass and mids. 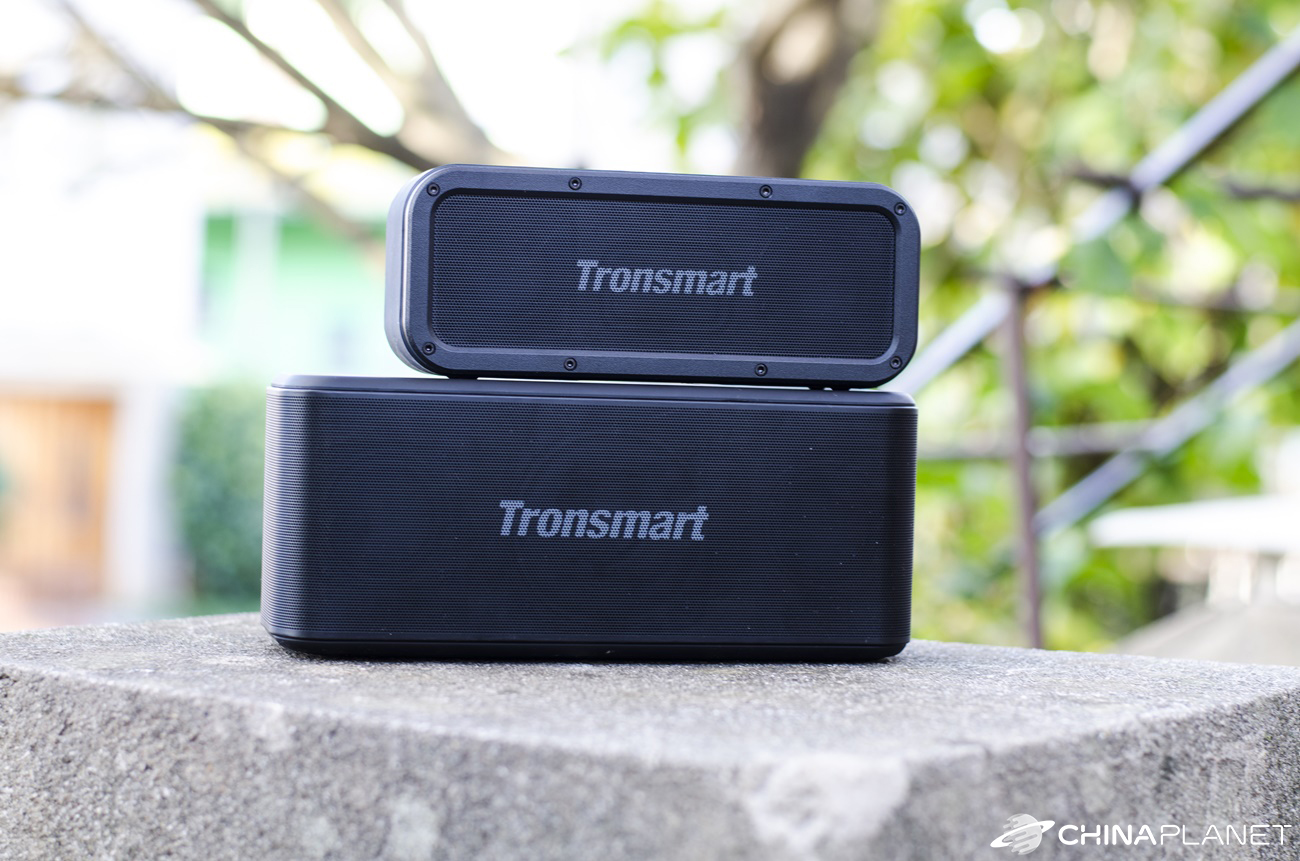 Overall, however, the basses at Element Force seemed less natural and far too dominant. In our opinion, the Tronsmart Element Mega Pro has a more balanced and clearer sound and more natural, unobtrusive bass, although the mids could be better. For us, Mega Pro is the winner.

The Tronsmart Element Mega Pro has two batteries that have a total capacity of up to 10 400 mAh. The manufacturer states the endurance of 10 hours at half volume. Of course we tested it. We used the speaker at a volume lower than 50% and lasted to play for about 12 hours (remaining capacity was 20%). The endurance stated by the manufacturer is so real.

For normal use, the endurance per charge is completely sufficient. 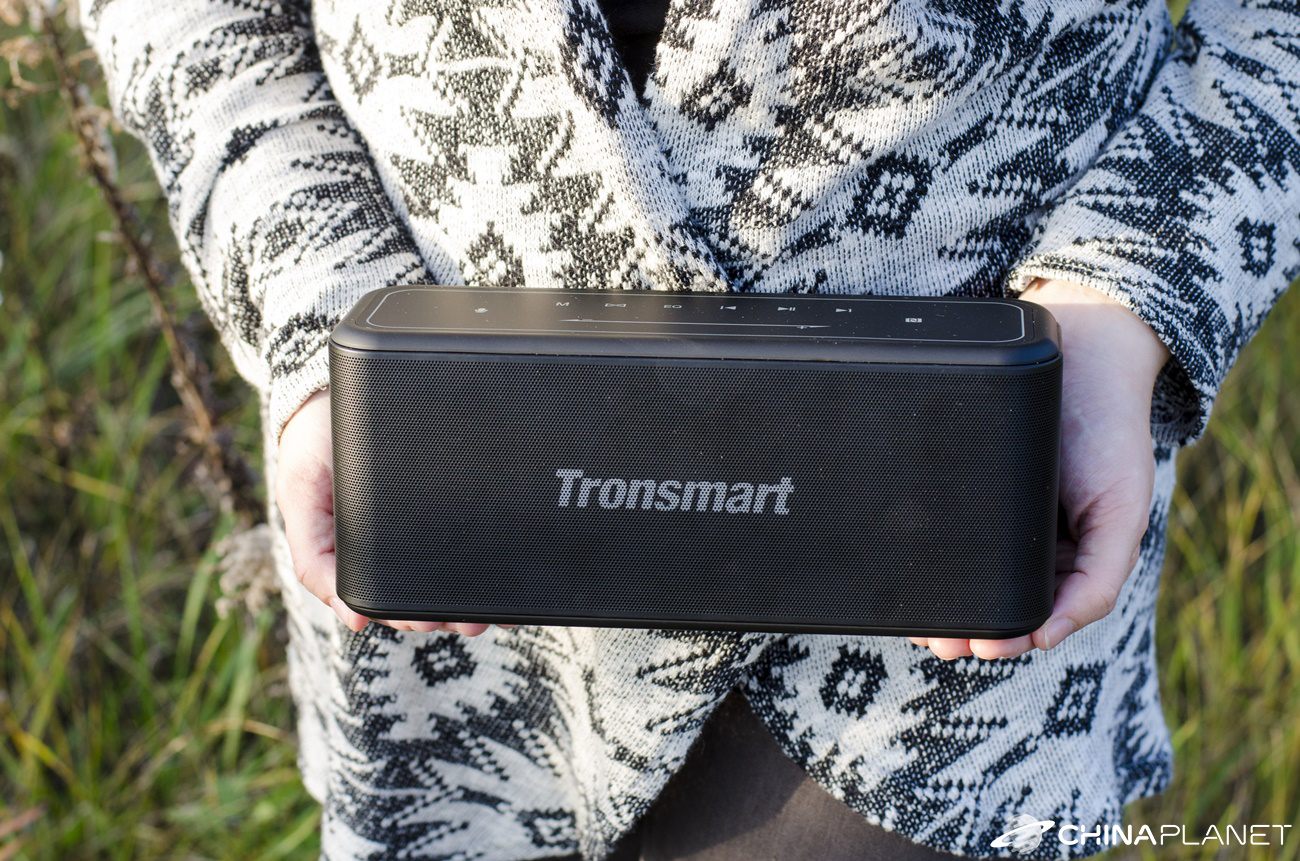 As far as charging is concerned, you will only find the mentioned short USB-C cable without an adapter in the package. We used a charging adapter from a phone that has an output current of 2 A. Charging from 20 to 100% took almost 5 hours. If you have a faster charger, you'll probably charge it faster. However, nowhere did we find information on the fastest charger that can be used.

The speaker has received IPX5 certification, so you don't have to worry about water. Who does not know the exact markings, IPX5 means resistance to splashing water (water from a 6.3 mm nozzle spraying on the device from all angles, at a flow rate of 12.5 liters per minute and a pressure of 30 kN / m2 within 3 minutes from a distance of 3 meters). 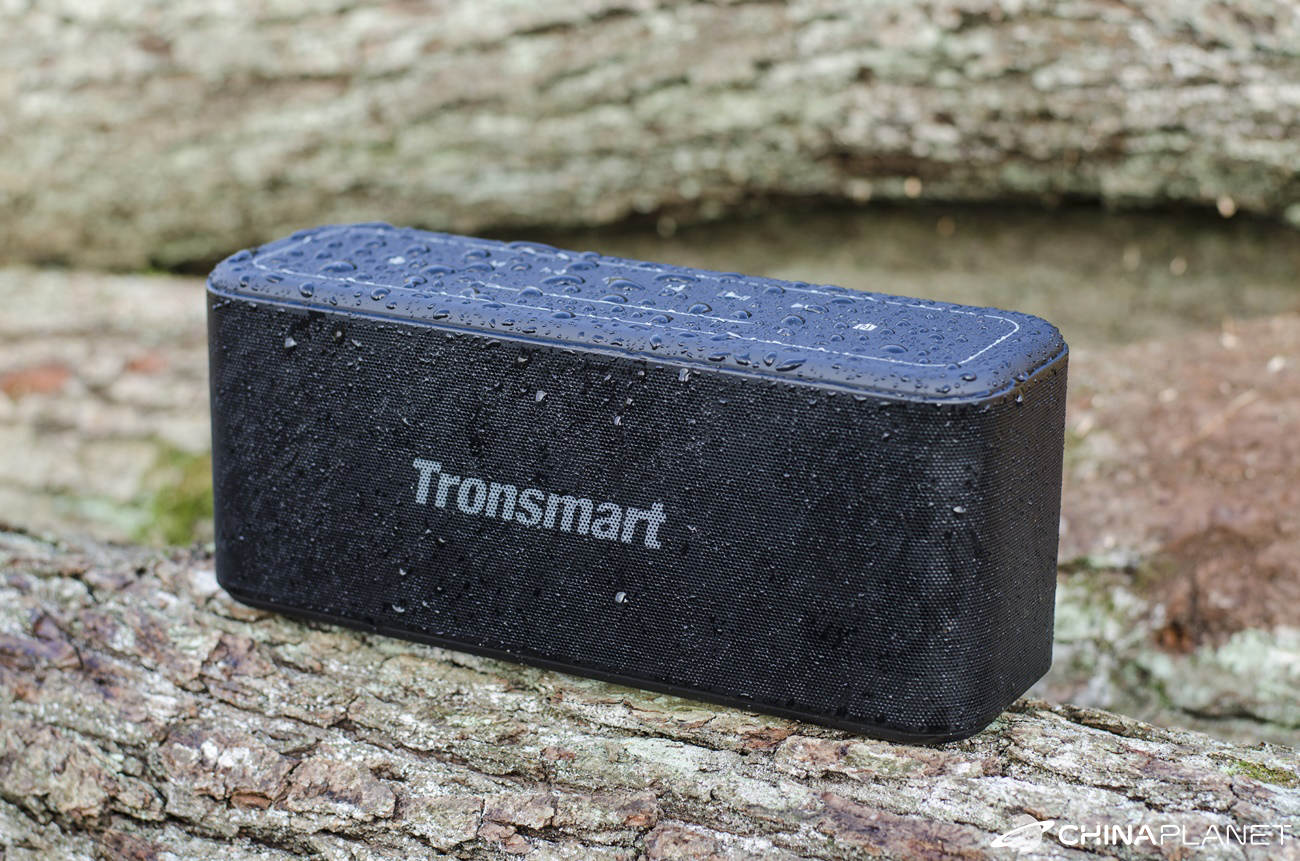 So if the speaker gets wet in the rain, nothing will happen to him. Of course we tested it. We sprayed water on the speaker from all sides and we continue to use it without any problems.

We assume that most of you connect to a wireless speaker using your smartphone. But the Tronsmart Element Mega Pro also offers other options. It can also play music from a USB key, microSD card or from a device connected to the AUX port. 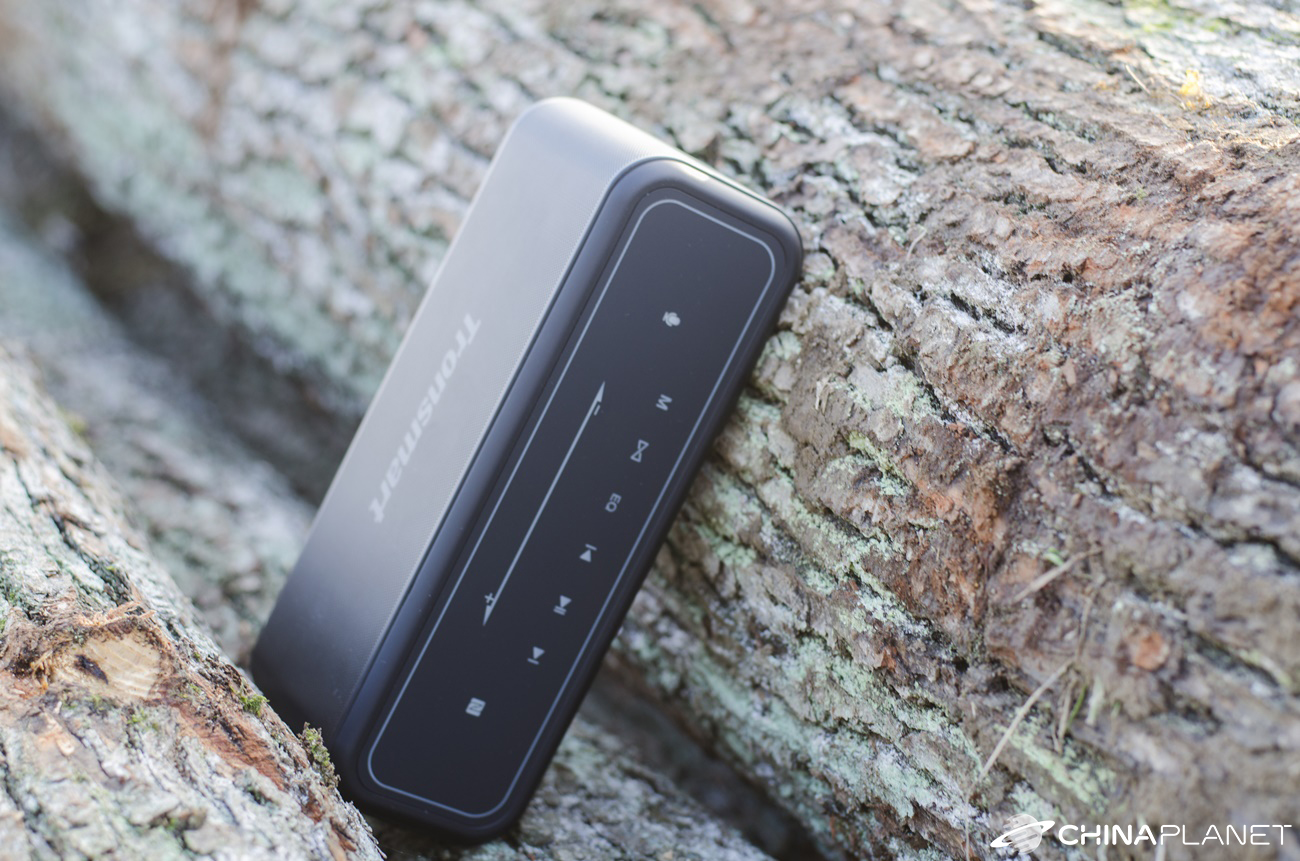 We tested all the ways and worked properly, without any problem.

Quality speaker for the discerning

We are extremely satisfied with the Tronsmart Element Mega Pro speaker. Thanks to the high-quality sound output, we enjoyed listening to music through it and we can only recommend it further.

It handles various music genres and has enough endurance on a single charge. It is also suitable for slightly larger spaces, for a cottage or a celebration. It is definitely one of the best portable speakers in its price range. You will not regret buying it.

TOP price in CZ: Baofeng UV-5R is an advanced transmitter with a range of 5 km, display and keyboard

New coupon: Artillery Genius 3D printer has more than 450 reviews. It uses FDM printing and also has a touch screen