We tested the accessories for the Xiaomi Pad 5 tablet

Recently introduced tablet Xiaomi pad 5 we have already tested it in the editorial office, in two versions - the global version and the Pro version. You can get our review read here. However, we also tried the available accessories - keyboard, stylus and flip case.

Where to buy tablet accessories?

You can buy a wireless keyboard, stylus and flip case from our favorite dealer TradingShenzhen. Although all the mentioned pieces of accessories are available in a Chinese warehouse, delivery at this seller is really fast by the proportions of a Chinese warehouse. At the same time, you do not have to worry about any additional fees such as customs duties or VAT. 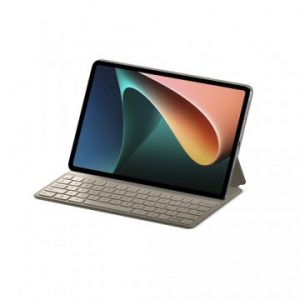 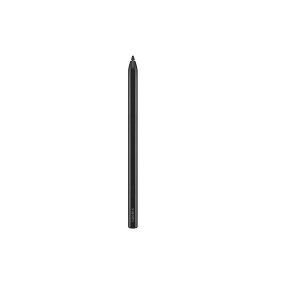 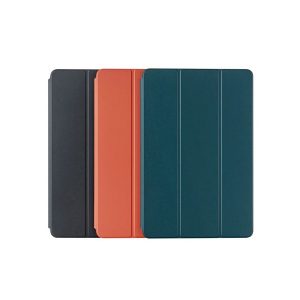 See also our review of the Xiaomi Pad 5 tablet:

The wireless keyboard is only available in black and is made of thermoplastic polyurethane (TPU). It is a full-fledged keyboard with magnetic closure and keys with a stroke of 1.2 mm. 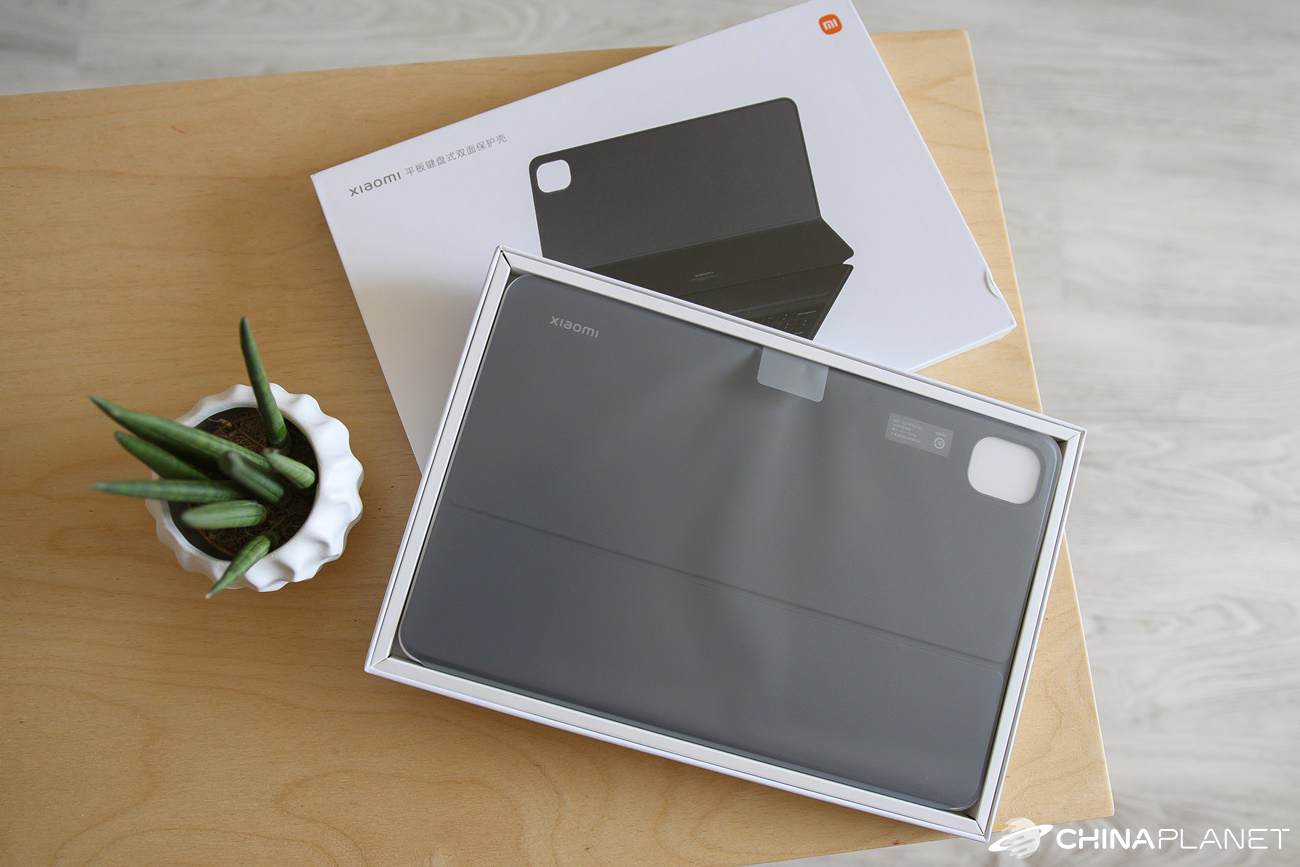 The keyboard is delivered in a flat white box and in addition to the keyboard itself, you will find in the package only instructions for use. As we have already mentioned, it is made of TPU and this material is very pleasant to the touch. It resembles skin to the touch and also to the look. The keyboard also serves the purpose of a tablet stand and will also serve as a protective cover. 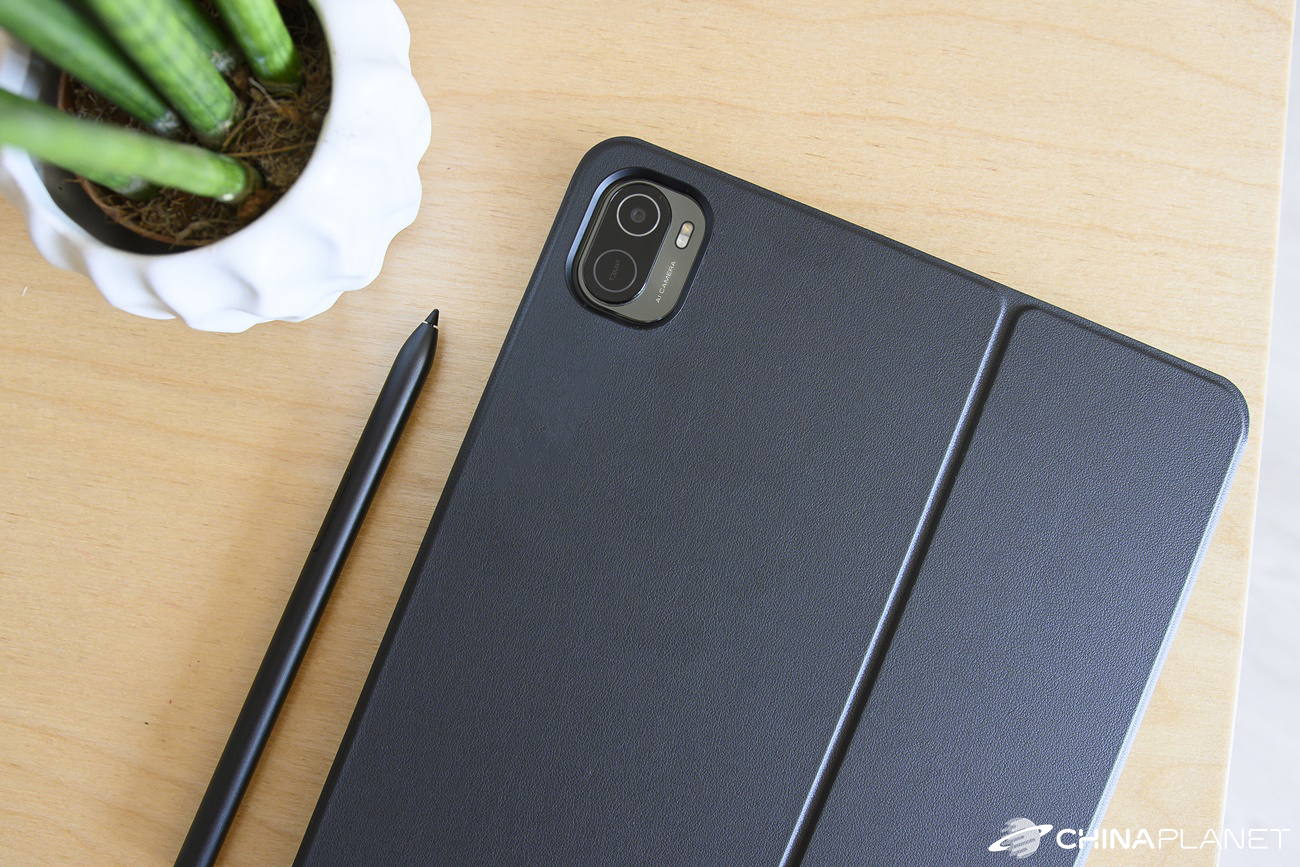 The keyboard cover is magnetic, and since the surface of the tablet Xiaomi pad 5 It is made of aluminum alloy, just insert the tablet into the keyboard so that the camera module fits into the hole in the case. The tablet magnets hold tight enough so you don't have to worry about it falling out of the pack.

Keyboard connection and its functions

The tablet connects to the keyboard very easily using three pins in the middle of the keyboard base, which you just need to connect to the pins on the tablet. Magnets also take care of the attachment. The keyboard is powered by these pins from the tablet, so it doesn't need any external power supply, and you don't need to recharge it either. 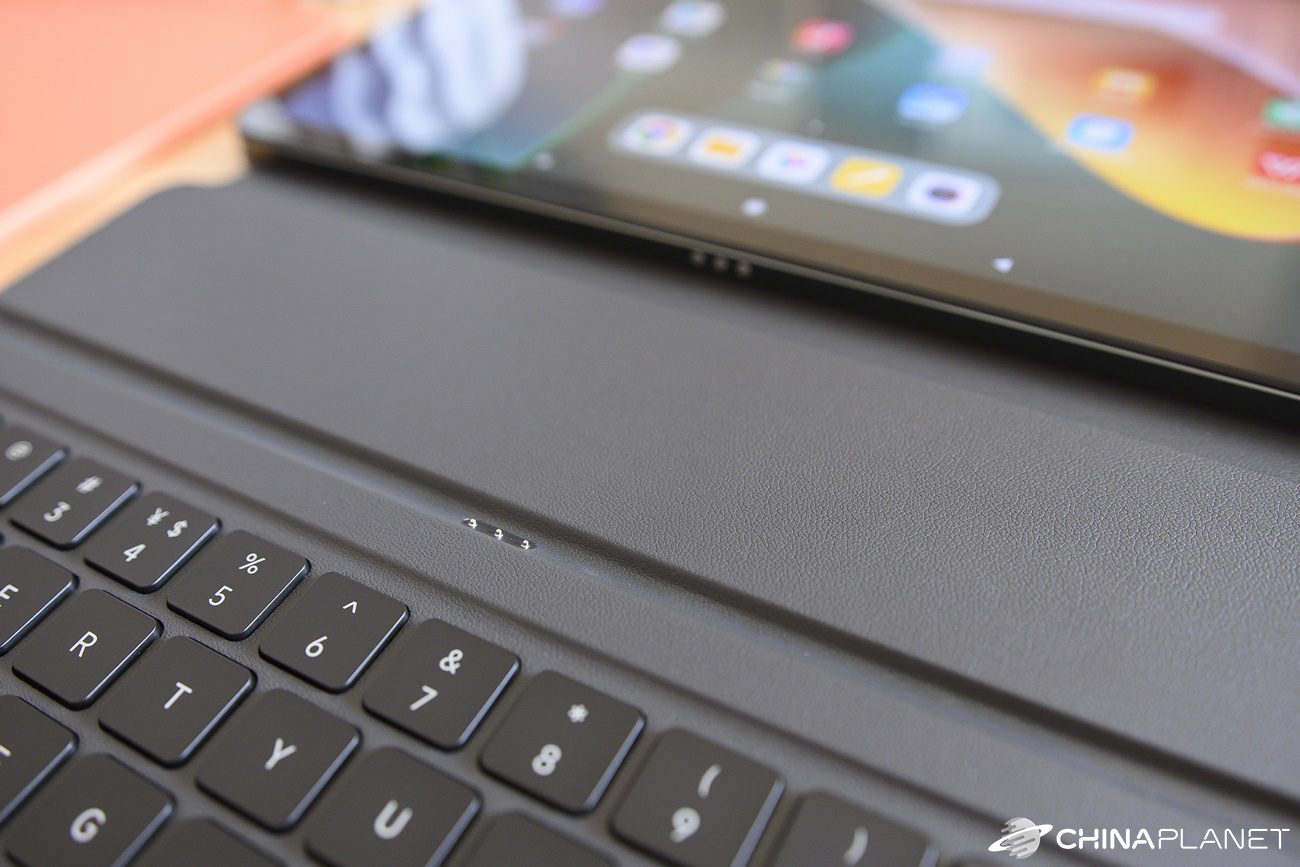 At the moment of connection using the mentioned pins, it is ready for use. You can also find keyboard information in the tablet settings under the Stylus & Keyboard folder. Here you can also see the available keyboard shortcuts, which are activated in combination with a special key that replaces the familiar Windows key, which is located between the Ctrl and Alt keys. 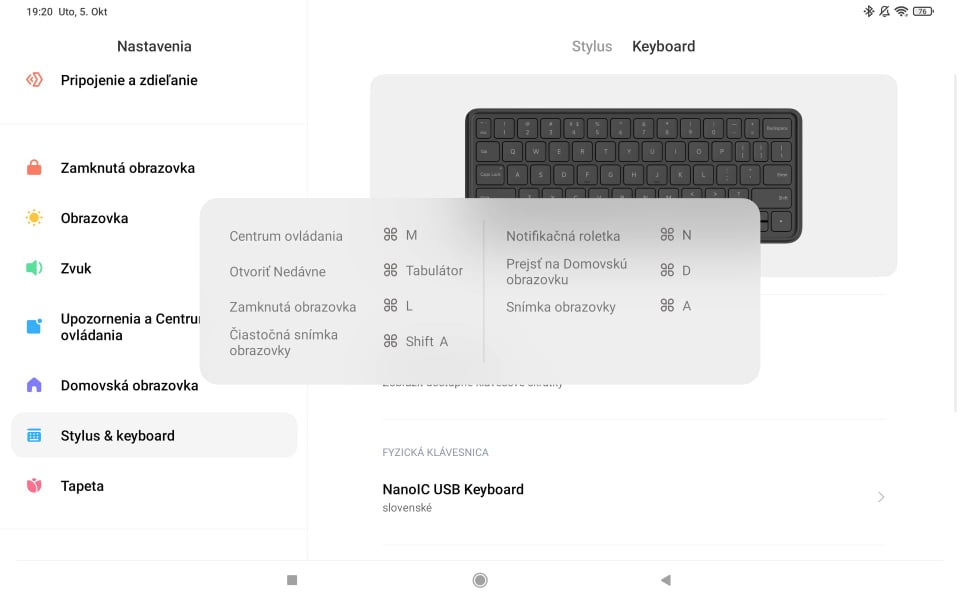 This allows you to quickly open the control center, lock the screen, notification roller or screenshot. You can see all the keyboard shortcuts on the screenshot above. Of course, you can also set the keyboard layout. We used the Slovak layout.

What is our experience with using the keyboard

The Xiaomi Pad 5 wireless keyboard is a great addition if you type often. The tablet holds well in it and thus actually replaces a small laptop. When not in use, simply flip it over and use it only as a protective case. You don't have to worry about accidental keystrokes in this position, because the keyboard is disconnected when you flip the back of the tablet. 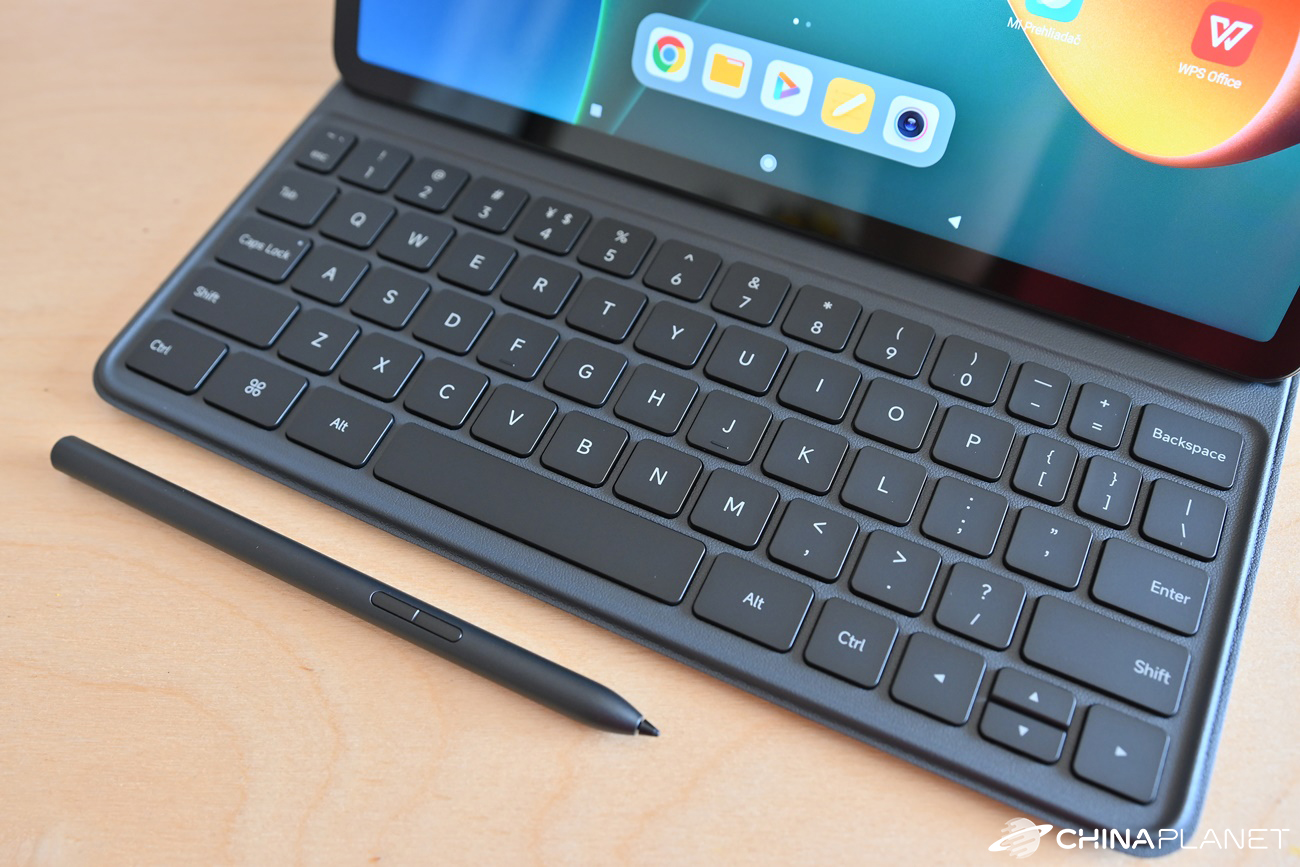 It contains a total of 62 keys with a stroke of 1.2 mm. It writes well on the keyboard, although due to its small size, it takes a while to get used to it. The problem is especially narrow keys such as the down or up arrow and the keys with parentheses and other signs around the backspace. They are really narrow, but after a few days we got used to them. 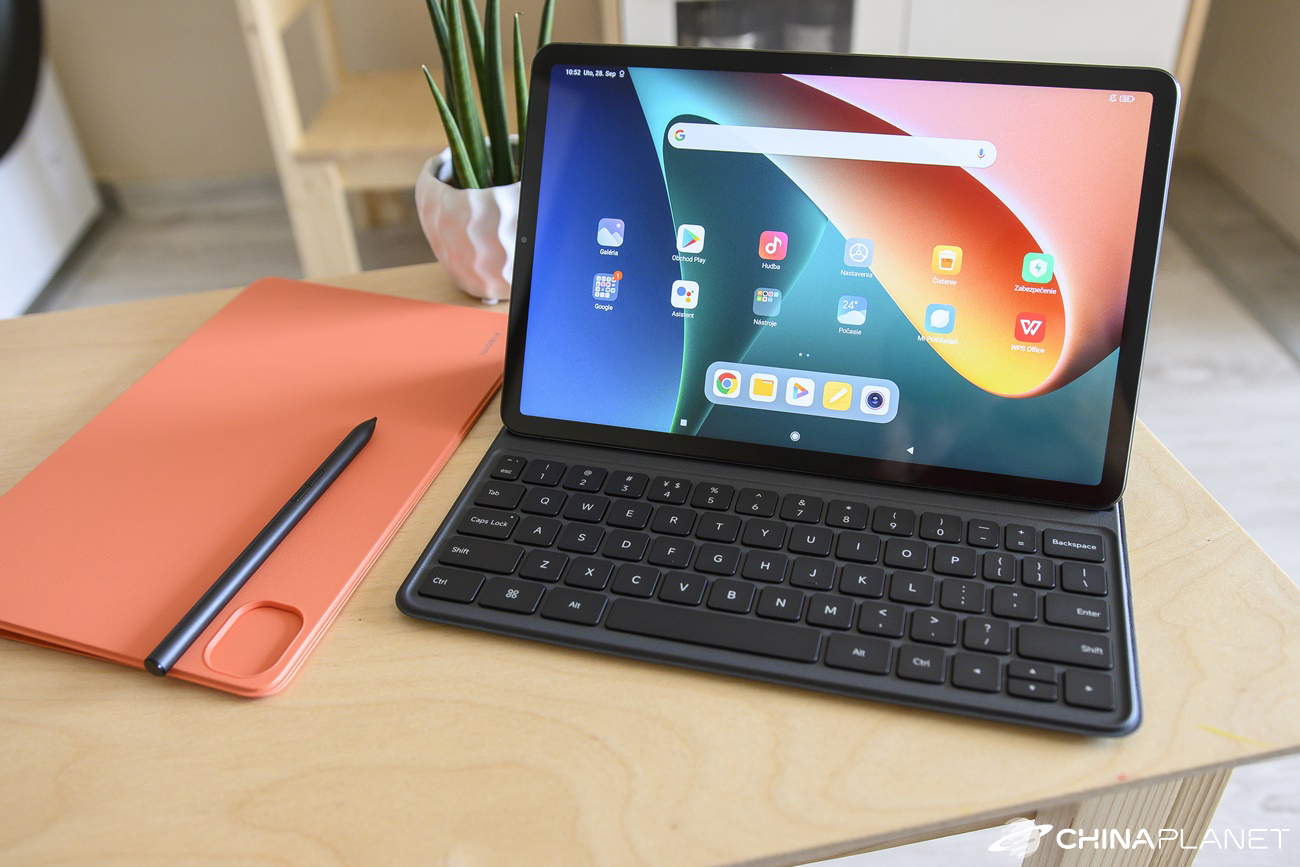 The price of the keyboard is not low, but it is a very practical accessory.

If you don't need a keyboard, we definitely recommend a simple flip case. It is available in three colors - black, orange and green. We ordered an orange case that will stand out perfectly. It was delivered to us in a thin paper box with a soft reinforcement in the middle. 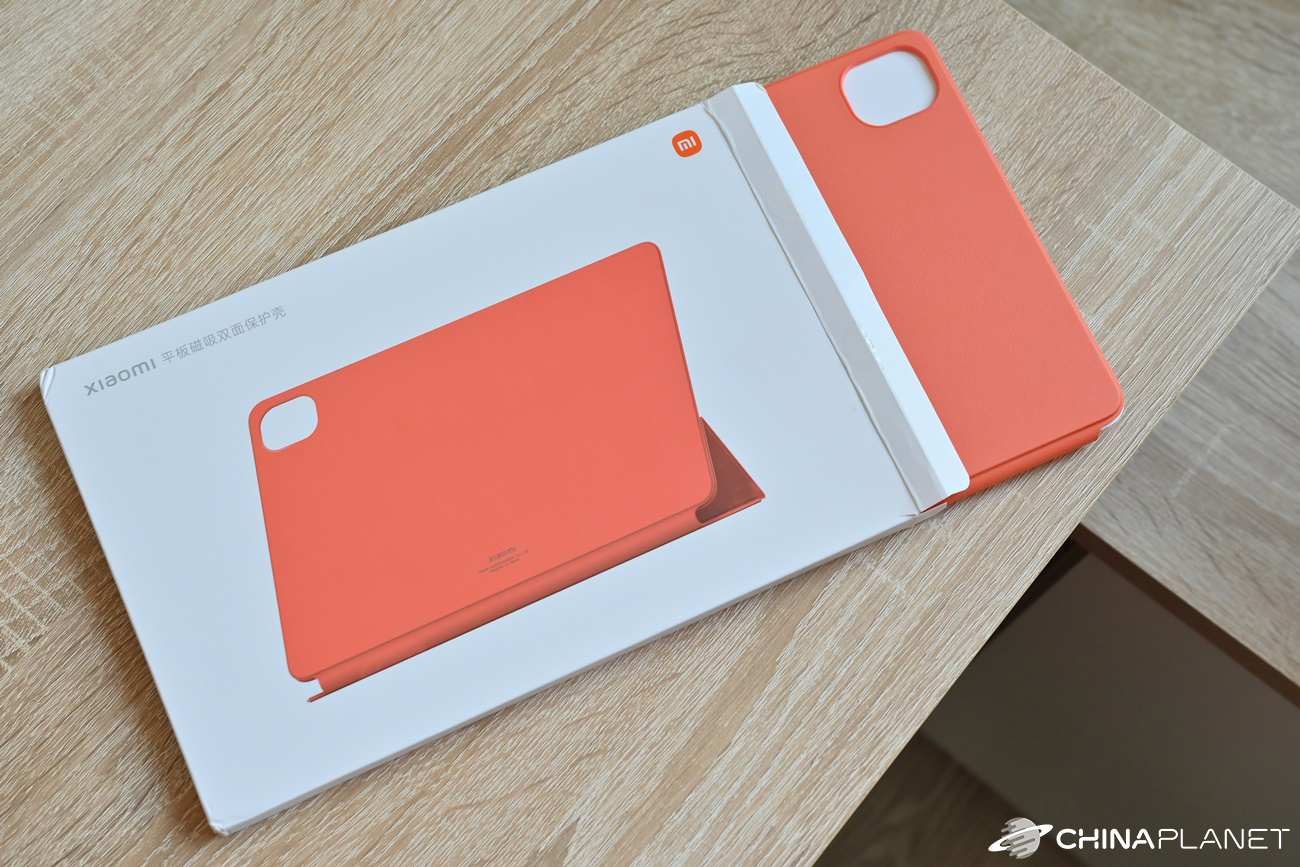 The case is made of a similar material as a wireless keyboard - made of polyurethane imitation leather. It is also very pleasant to the touch. The case is also magnetic, so the tablet is placed in it just like a keyboard and held by magnets.

The front of the housing is also magnetic and consists of three parts that can be folded into a triangle. By folding and throwing it into the back, you get a practical stand that you can use, for example, to watch videos or movies. 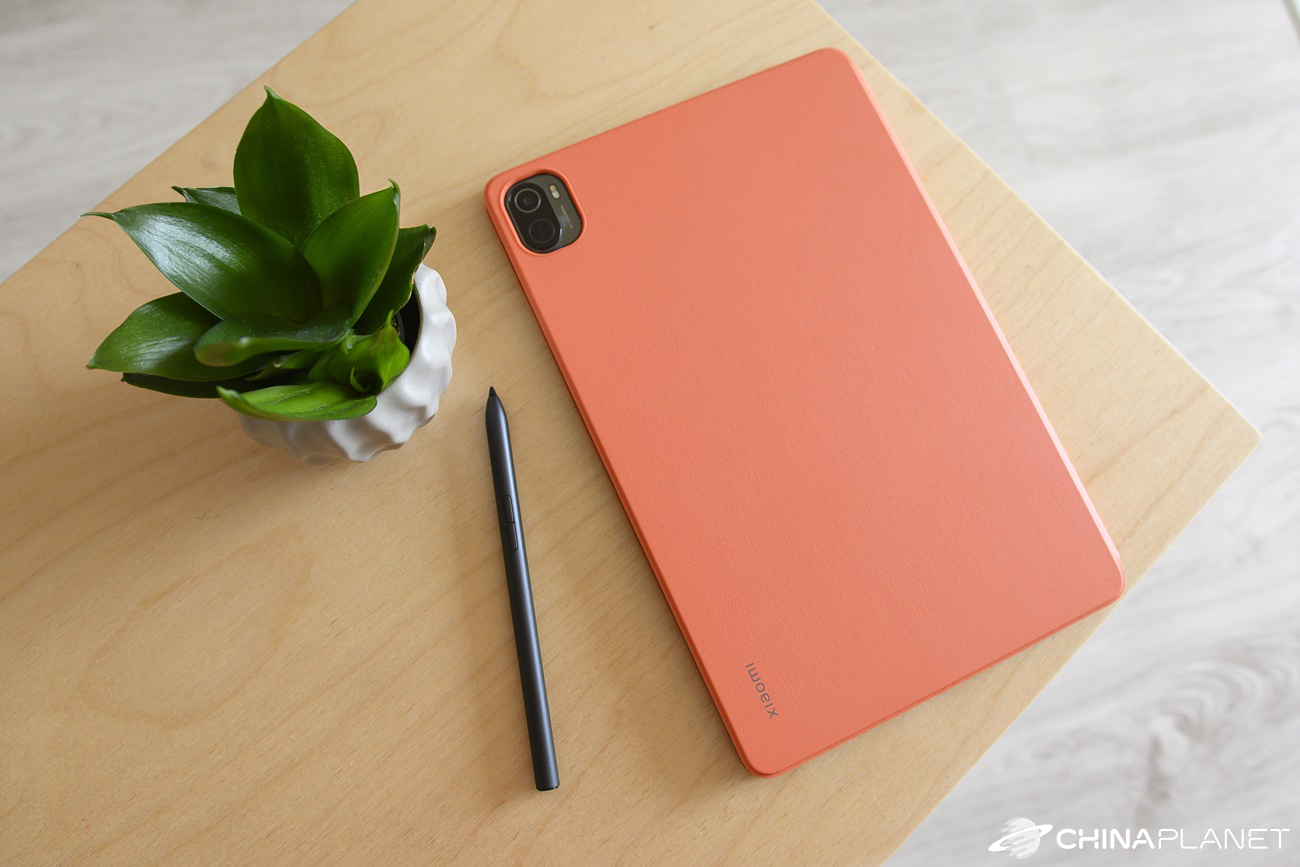 You do not need to unlock the tablet after opening the case unless you have set a password or pattern security. In this case, the screen will automatically light up and the tablet will be unlocked when the case is opened. Of course, if you have security set, it will remain on the lock screen. 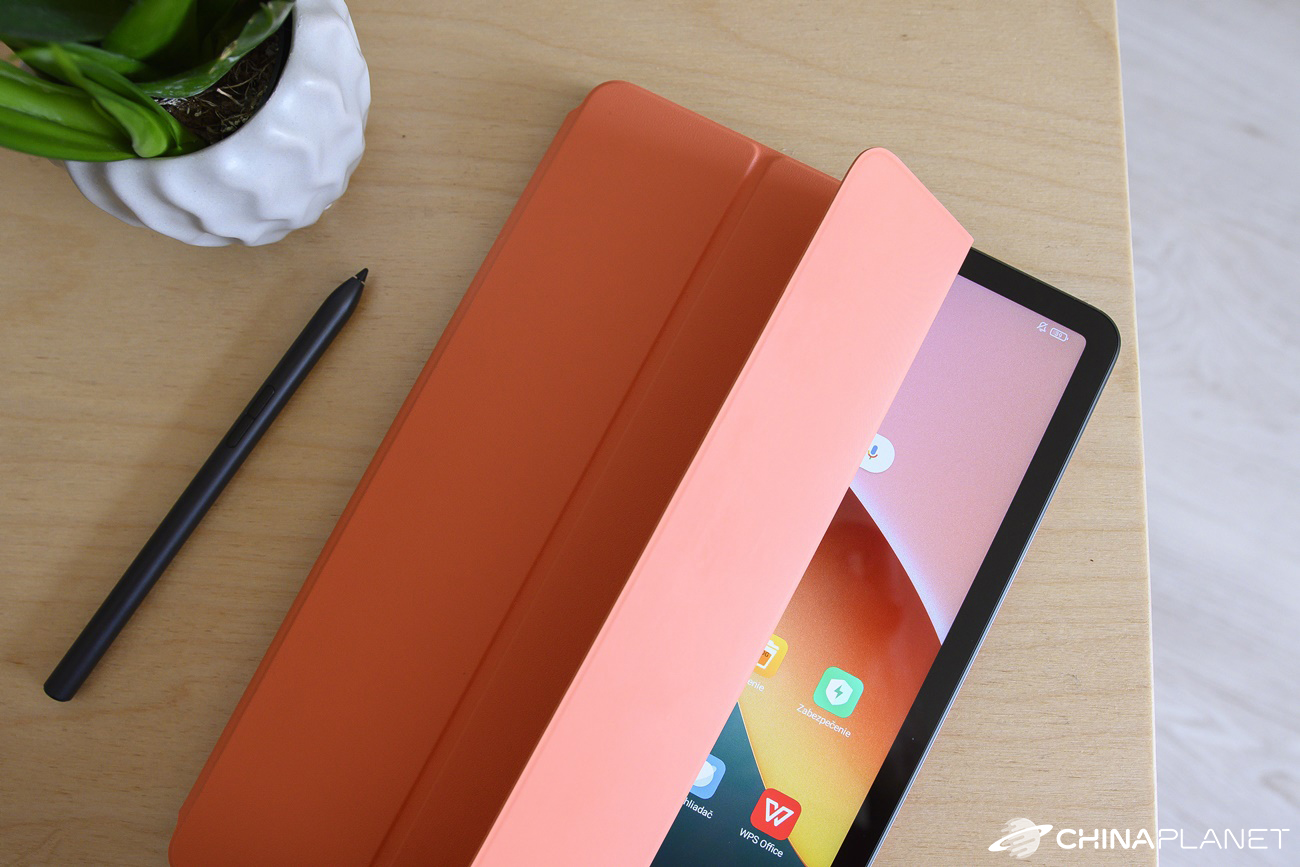 Another, very interesting accessory for the Xiaomi Pad 5 tablet is the so-called stylus or Slovak touch pen. It comes in a small white box, similar to classic premium pens. It is protected by foil and reinforcement inside the box. In addition to the pen itself, the package also contains a spare tip. 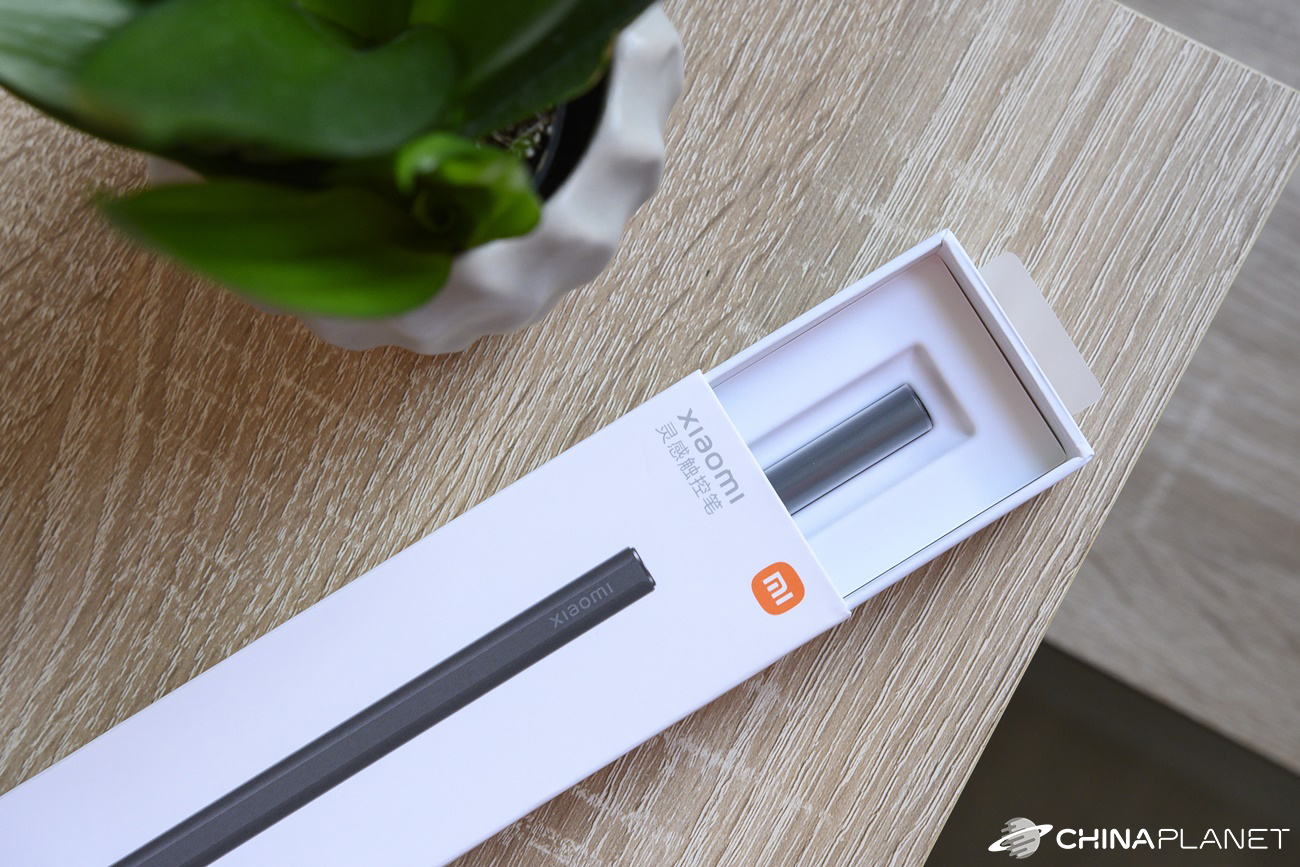 The stylus has a length of 152 mm and a weight of 12.2 g. It is made of plastic with a matte black surface. It is pleasant to hold in the hand for a long time. It contains 2 buttons placed right next to each other within reach of the thumb.

The stylus connects to the tablet using Bluetooth technology. We initially had minor problems with the connection, when the tablet could not find the stylus. However, after holding both buttons on the stylus for a few seconds, we were able to pair it with the tablet. You can easily place the stylus on the edge of the tablet under the double volume control button, where it charges at the same time. Magnets hold him here. 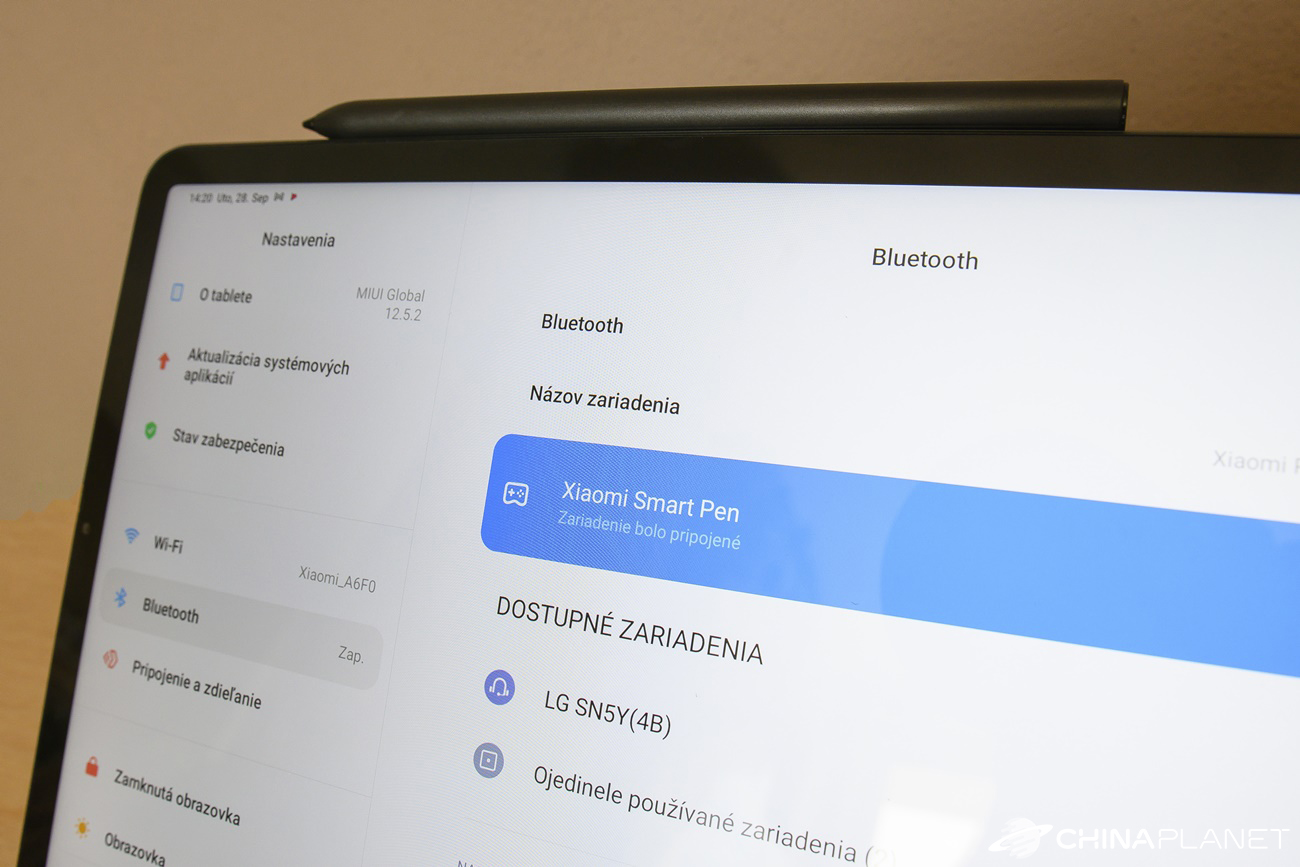 Pen features and our experience

As already mentioned, the stylus has a pair of buttons. In the tablet settings, you will find information on whether the stylus is connected, as well as a description of the functions of the individual buttons. The bottom button is used to activate the drawing. If you hold it down for a long time and touch the tablet screen, the drawing opens in the notes application. 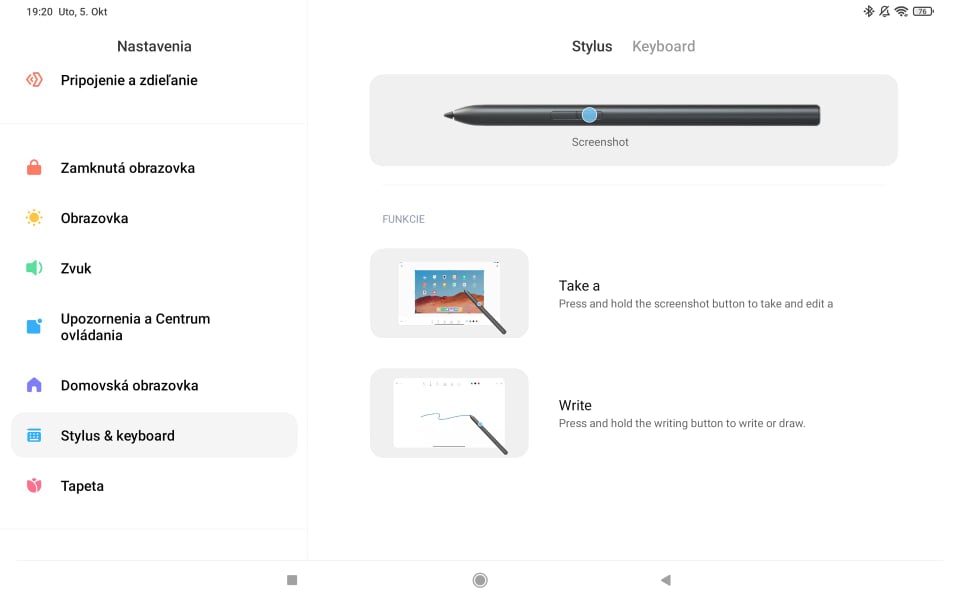 Thanks to the 4096 pressure levels that the pen can recognize, drawing is very interesting. If you often draw or like to write notes on a tablet, the pen will make these activities easier for you. During writing or drawing, a small delay in reactions is visible, which, however, did not interfere with us at all and did not affect the functionality of the pen in any way. 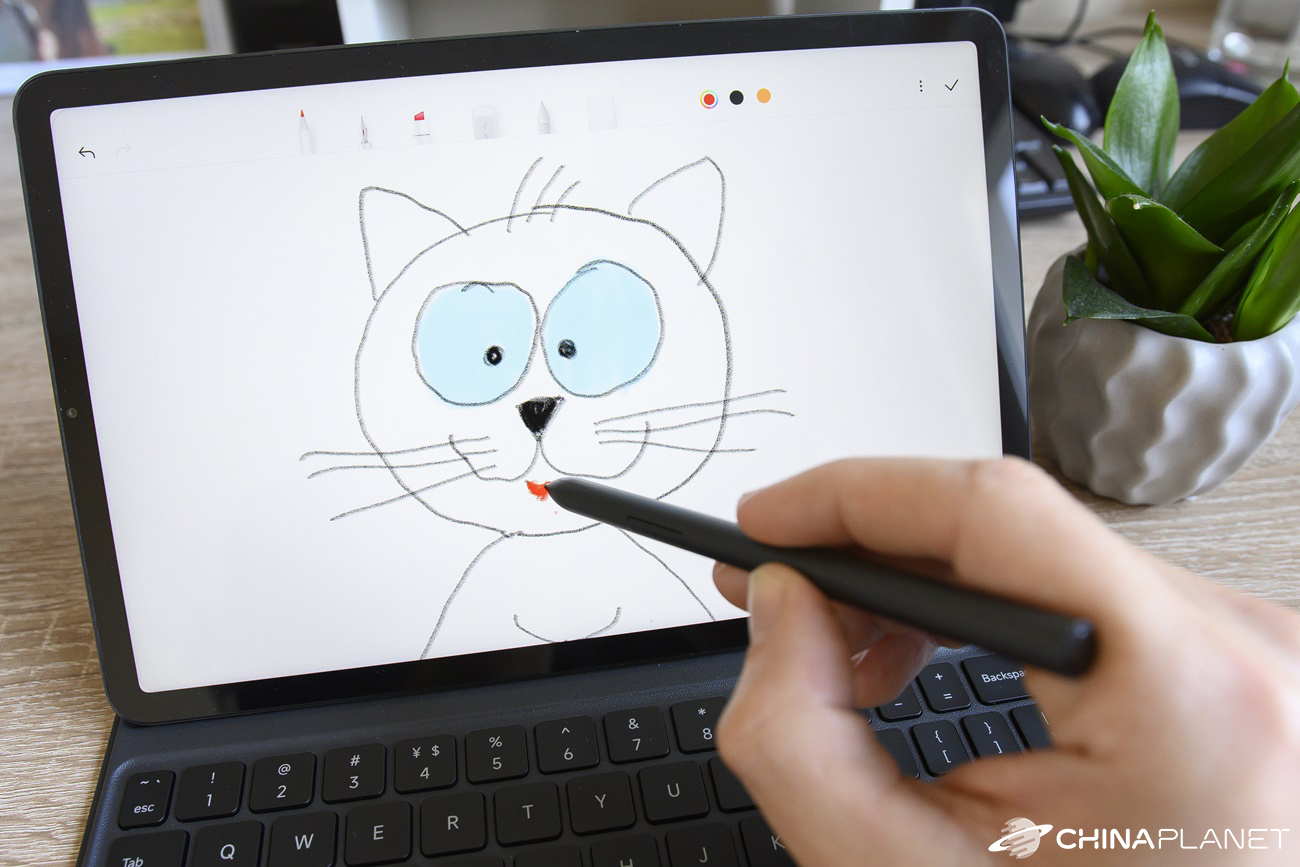 The second button is used to take a screenshot. You also need to hold down the button for a longer time, and you can mark the space on the tablet screen from which you want to save the screenshot.

However, the pen is not just for drawing or taking notes or saving screenshots. You can use it for any work with the tablet, as you can use the pen for all activities instead of your finger. The stylus is also not one of the cheapest accessories, but it will definitely find its target group. Especially if you often and like to draw or write notes, you will definitely appreciate the stylus. 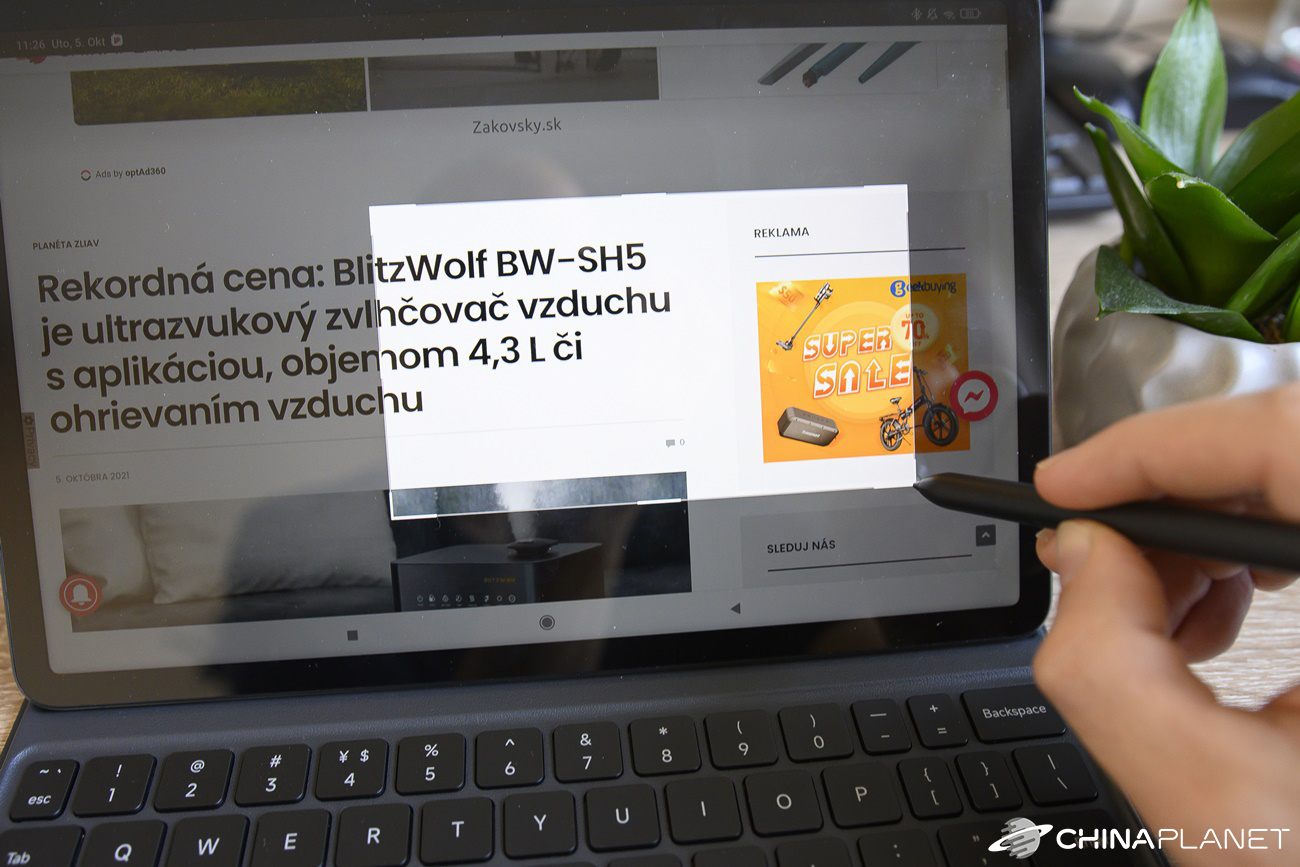 A slight downside is the inability to set custom functions for the buttons on the stylus. However, we believe that Xiaomi will offer us this option in one of the tablet system updates.

The new Soundcore Liberty 3 Pro is recommended by world producers. They have Hi-Res Wireless, LDAC support and exceptional sound quality