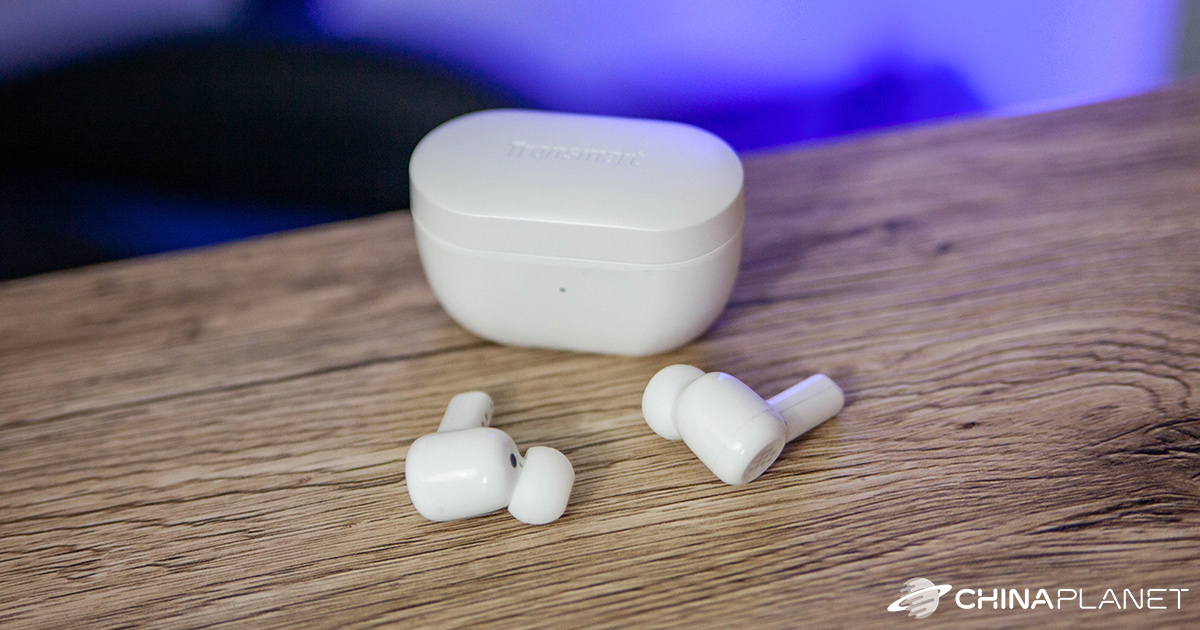 Wireless charging of the box

Equalizer in the application

Tronsmart Apollo Air + At first glance, they are reminiscent of well-known headphones from Apple. However, they are a small one on the market and therefore they have to be interested in something other than just the appearance - they offer hybrid noise reduction, Qualcomm chip, support aptX, total endurance with a charging case of up to 20 hours, in-ear detection or touch control.

Quality sockets with a well-balanced sound and a proper noise reduction, not just one invented in the parameters from the manufacturer, start at the price of 60 €, around which Apollo Air + is also moving. Ironically, their big competition is the Tronsmart Apollo Bold, but they are much larger and do not have the iconic appearance of AirPods Pro. Compared to these reviewed headphones, the sound quality is very similar, but we like the more compact dimensions.

They will come to you quickly from the EU warehouse

Wireless Tronsmart Apollo Air + has the best deals on offer from our favorite Geekbuying reseller in its European stock. You can choose from black and white. You will be delivered within a few working days without VAT and other fees. The price is final for you! 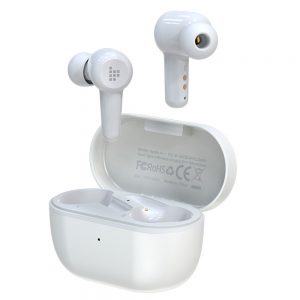 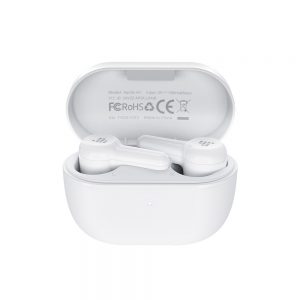 The Tronsmart brand is not just such a cheap brand from the East. Their products come in an iconic purple package, which at first glance attracts attention and it can be seen that it is about quality. We have tried several products from them and we have not been disappointed yet. The box with inscriptions describes all the features of the headphones and inside, in addition to the sockets and the charging box, there are 4 pairs of spare rubber bands, a USB-C charging cable, a paper manual and a warranty card. 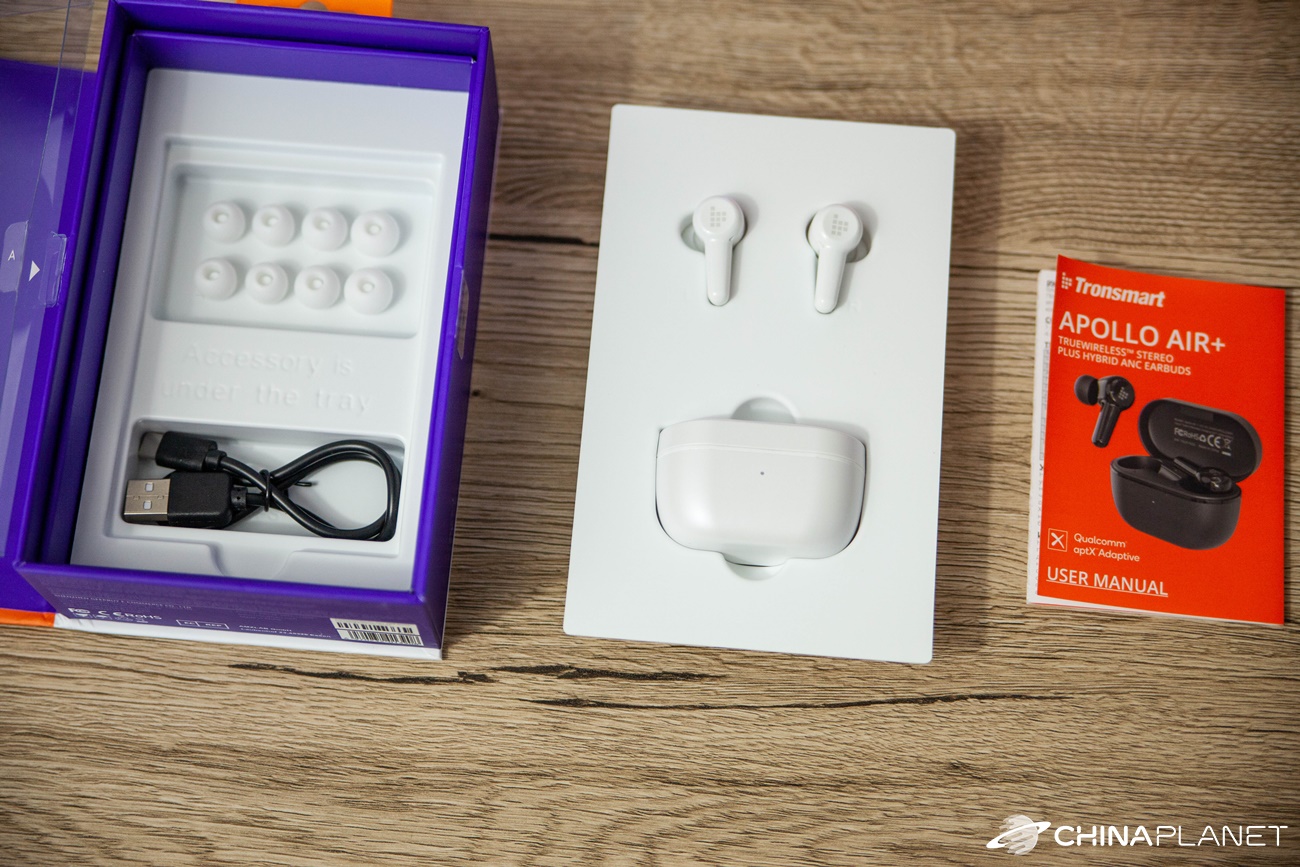 Higher-quality wireless headphones with hybrid noise reduction tend to be larger, especially because of what they have to hide inside. However, the Tronsmart Apollo Air + have managed to remain compact and will not be as disturbing when you have them in your ear. The dimensions of the headphones themselves are values 5,9 cm x 3,2 cm x 3,7 cm and one weighs only 43 grams. 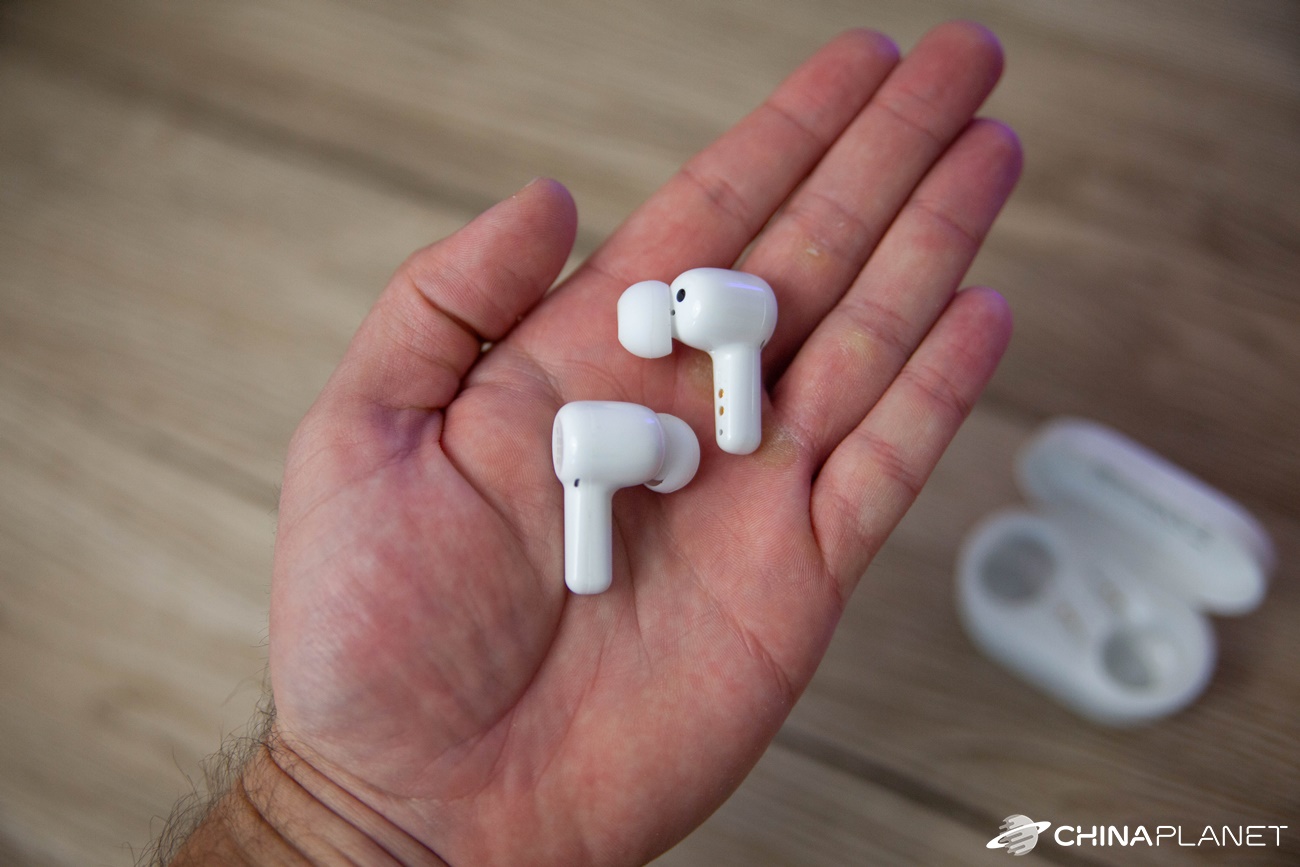 The sockets have a simple design and a distinctive Tronsmart logo on the outer wall. This is also the touchpad that controls the headphones.

They are sold in white and black. The charging box contains a USB-C input and next to it is a button used to start pairing. The box is a bit bigger, but more importantly, it contains wireless charging, which will allow you to use your wireless setup if you have one at home. 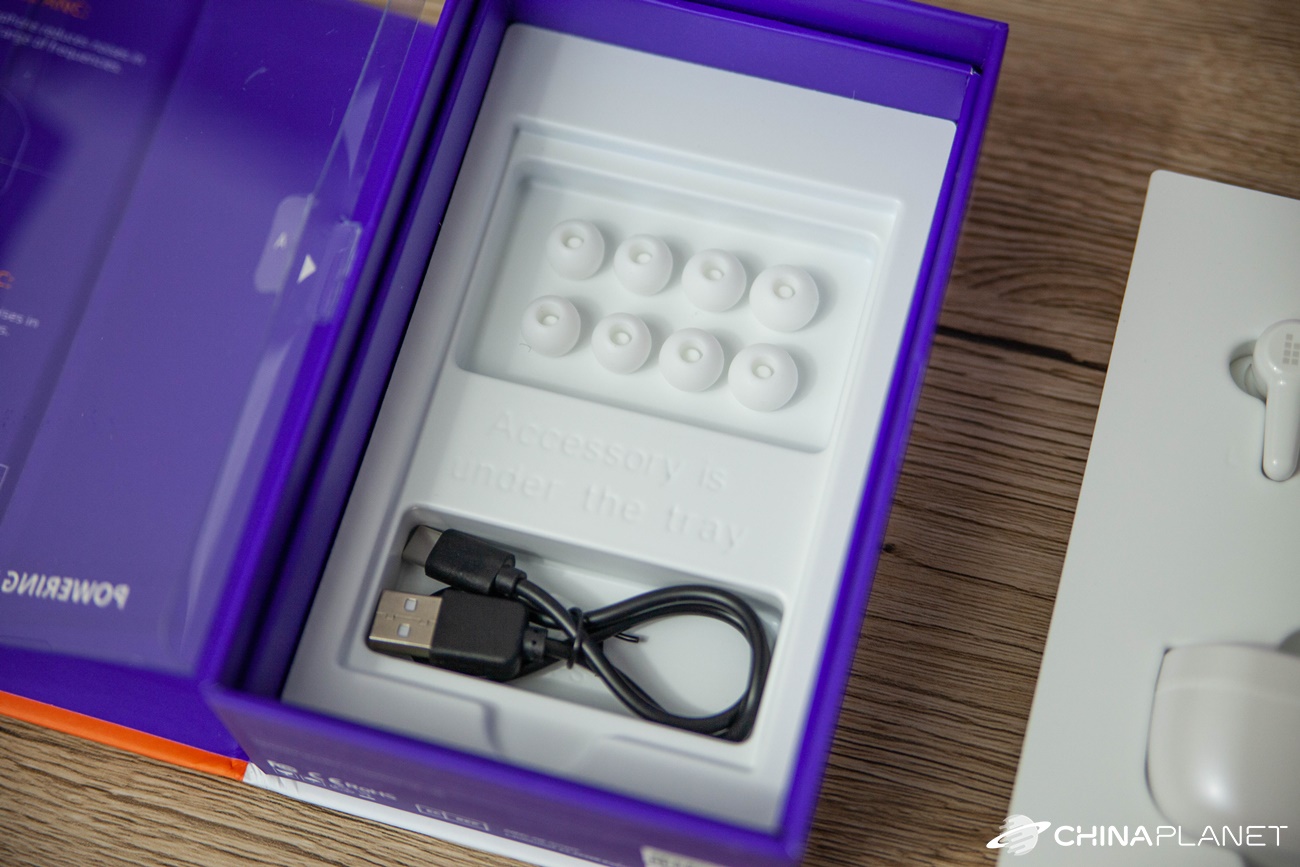 We cannot forget the protection certification either IP54, which guarantees that the headphones will work even if you are just sweaty or with a few drops of water.

When first put on the ear, we were thrilled with the headphones, in terms of holding in the ear and wearing comfort. After turning on the first song, it was a bit less enthusiastic. However, it was saved by a mobile application and an equalizer, but more on that later. We do not yet understand why the manufacturer chose the worst balanced in terms of treble and sound range as the original mode. The bass was quite acceptable, but compared to the Soundcore Life Q30 headphones, the music sounded very flat. 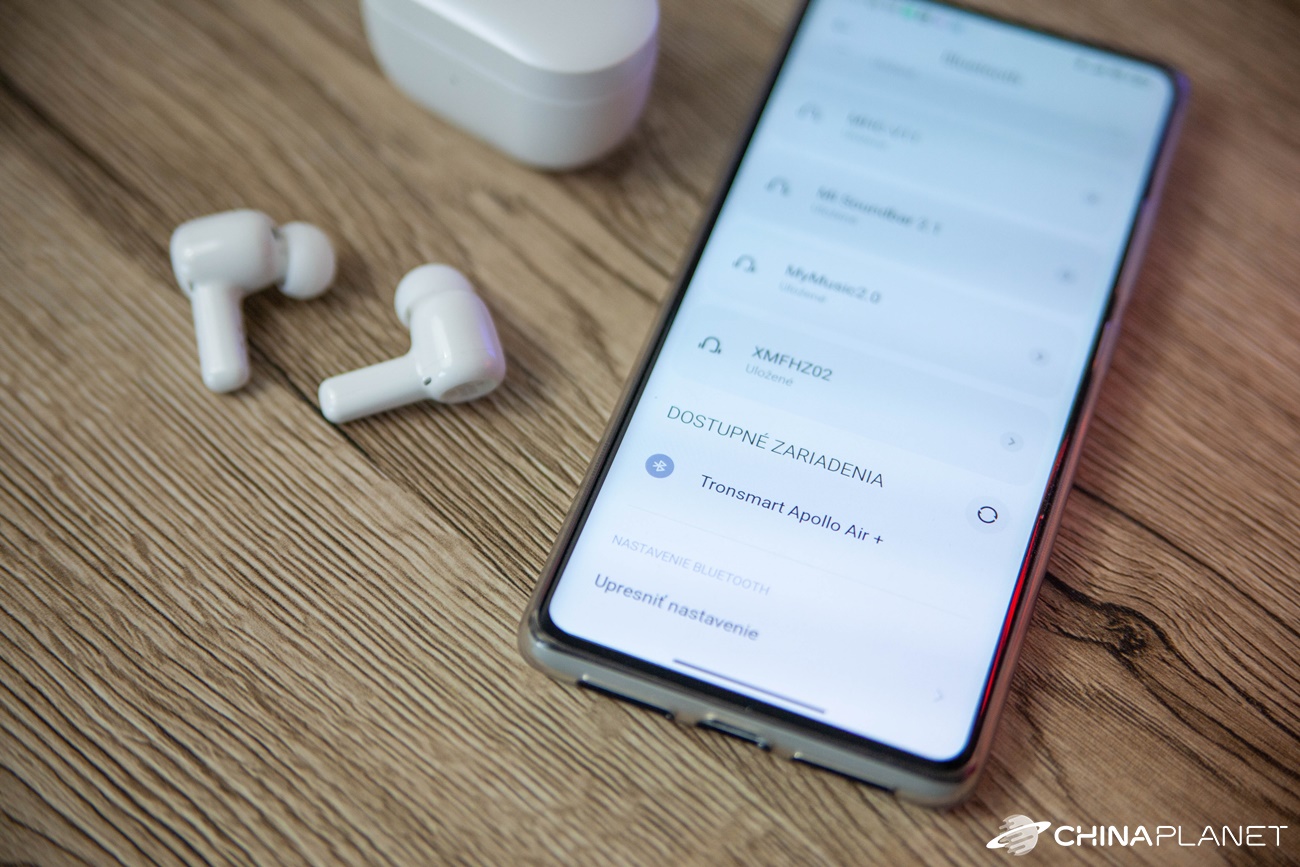 Of course, it also depends on the music played, we chose modern bass music (Drum and bass) for the test, and this original regime didn't fit here at all. After choosing the right mode (in our case "Original") it was much better. But we would still say that a more significant pitch component is missing, but the sound is still very good.

After the pop music, where the main part of the song is singing, the result from these headphones was really decent. The less demanding user does not seem to notice any shortcomings or differences compared to better headphones. 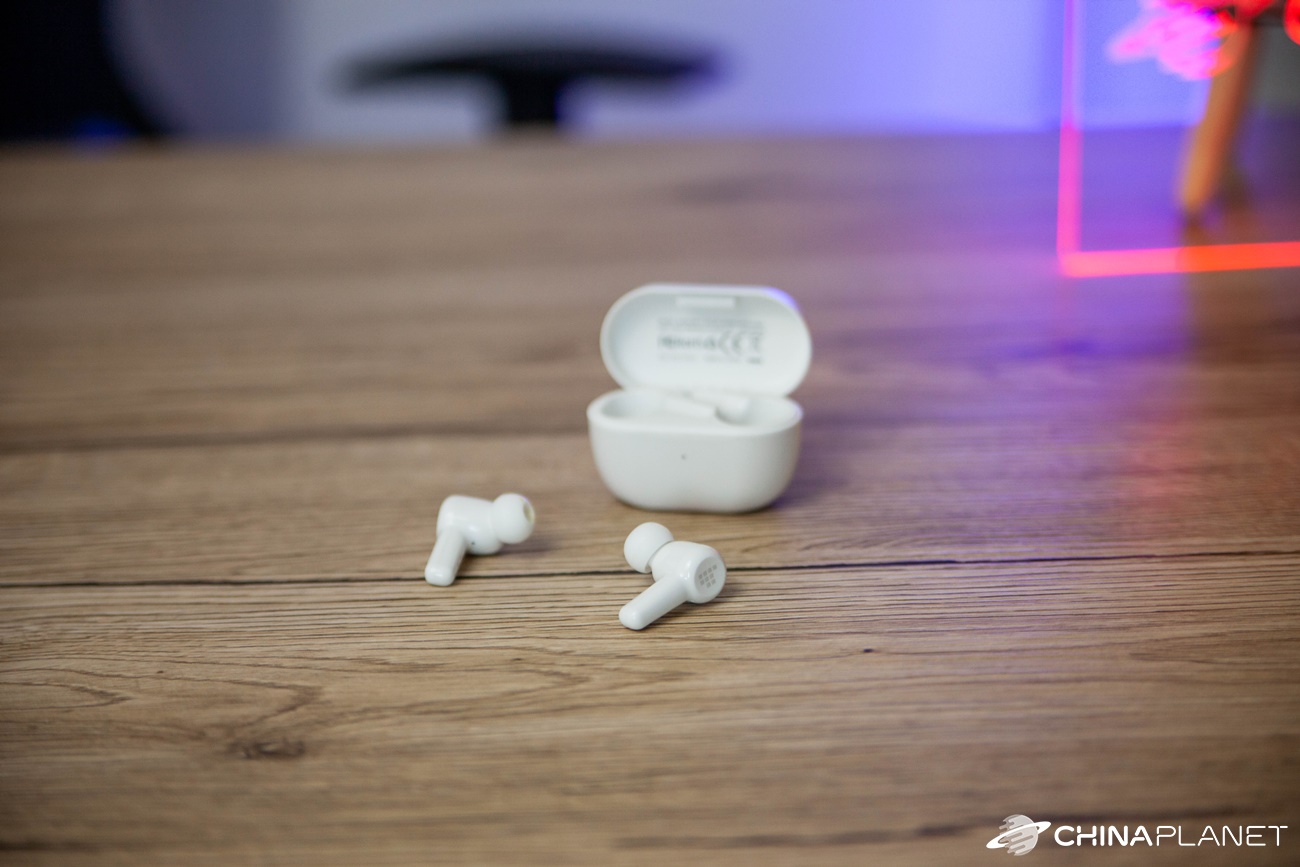 The resulting sound quality is therefore very decent, especially thanks to the equalizer. Of course, it depends on the type of music played and the listener's trained ear, but Tronsmart Apollo Air + came up well in the sound test section. But if you have an audiophile, look for something better, but you will have to count on a minimum price tag of € 150 and more.

The handy function of the headphones is the sensor, which detects whether the headphones are just worn in the ear. If not, they will automatically stop playing. For example, Tronsmart Apollo Bold has the same function and we really like it. 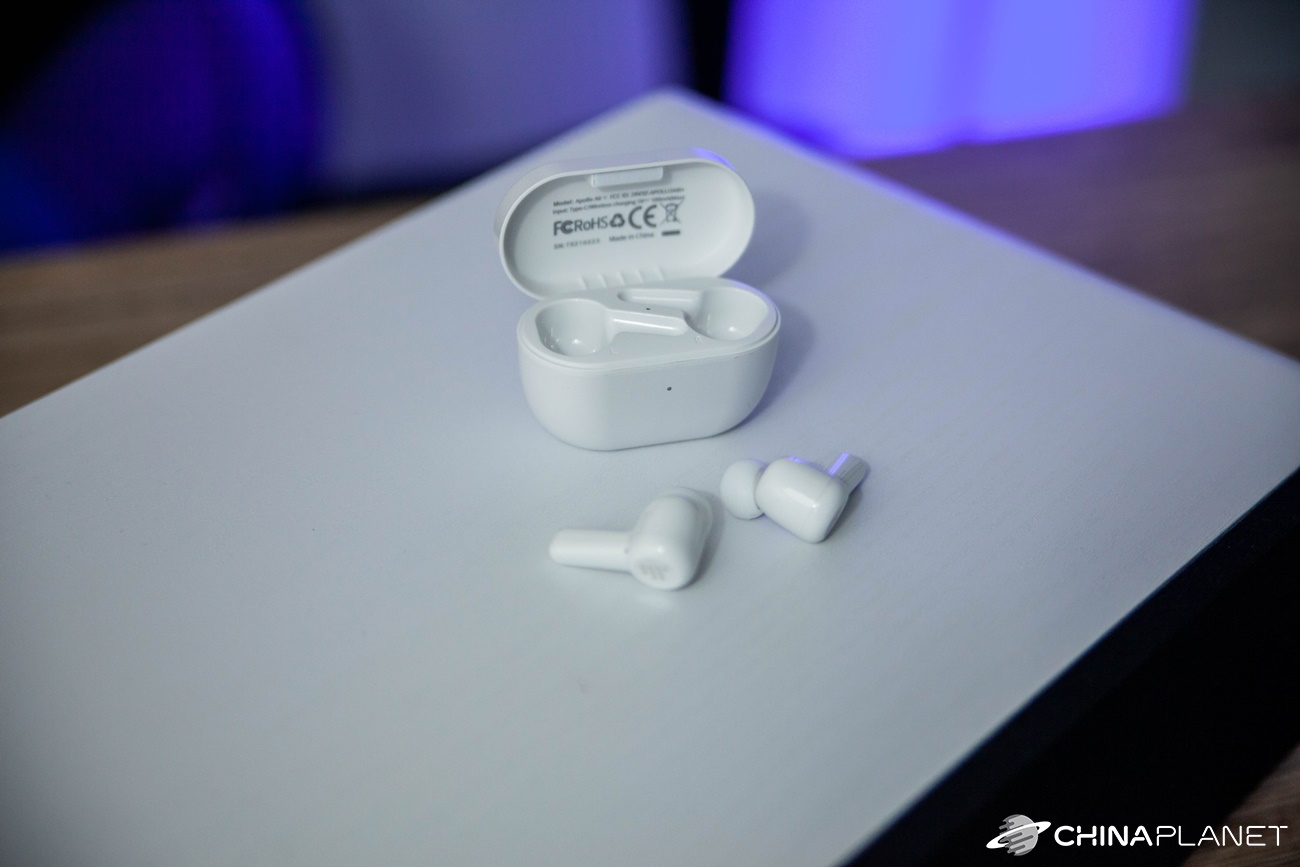 The equalizer in the app saved it

As we mentioned in the sound test section, equalizer is a very important part of these headphones and therefore be sure to download Tronsmart application to your smartphone. It can search for headphones (they cannot be connected to your phone at the moment). In addition to the equalizer, there is also noise reduction control, viewing the battery status of individual headphones or change of touch control, which you can completely customize.

The equalizer contains a total of 8 modes, of which in our opinion two are applicable. We chose to listen to bass music Original. The original sounded very flat and the manufacturer made the big mistake of leaving it as the original for the new headphones. A user who would only have them connected only to the computer could wrongly condemn the sound of the headphones as poor quality. The 3D mode still sounded pretty good. Deep Bass mode already had oversized bass. 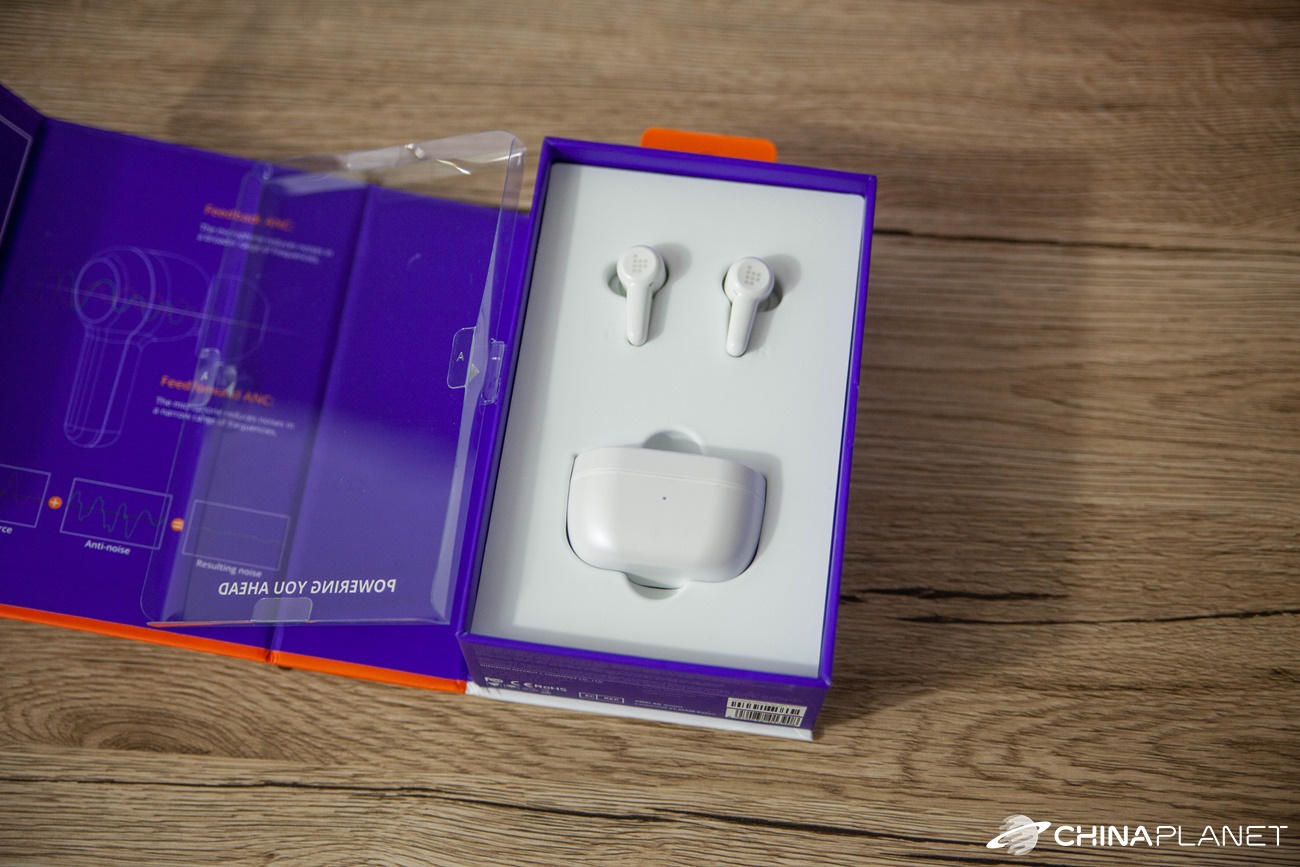 These were the main practical features of the application. You can go through it too update firmware headphones, unplug them directly, or read the digital manual, which some customers will appreciate. So it is a practical helper for headphones and you can have not only headphones but also speakers.

Wireless control can bother someone, especially because of unwanted touches, but most wireless phones already have it and you can get used to it. With Tronsmart Apollo Air + it is possible to control music playback, volume, noise reduction modes and of course the call. You will find everything you need in the enclosed manual.

The extended part of the handset, which is powered by a rubber band, has a more elongated shape, so the handset can be gripped well during repair and use so that it does not unnecessarily and unintentionally compress the contact surface, which we consider a plus.

The manufacturer of the headphones states 5 hours on a single charge and 20 hours of total life, even with a charging box. They should be able to charge up to 4 times, charging the box itself takes about 2,5 hours. As usual, the plugs are charged in the box wirelessly via magnetic pins. 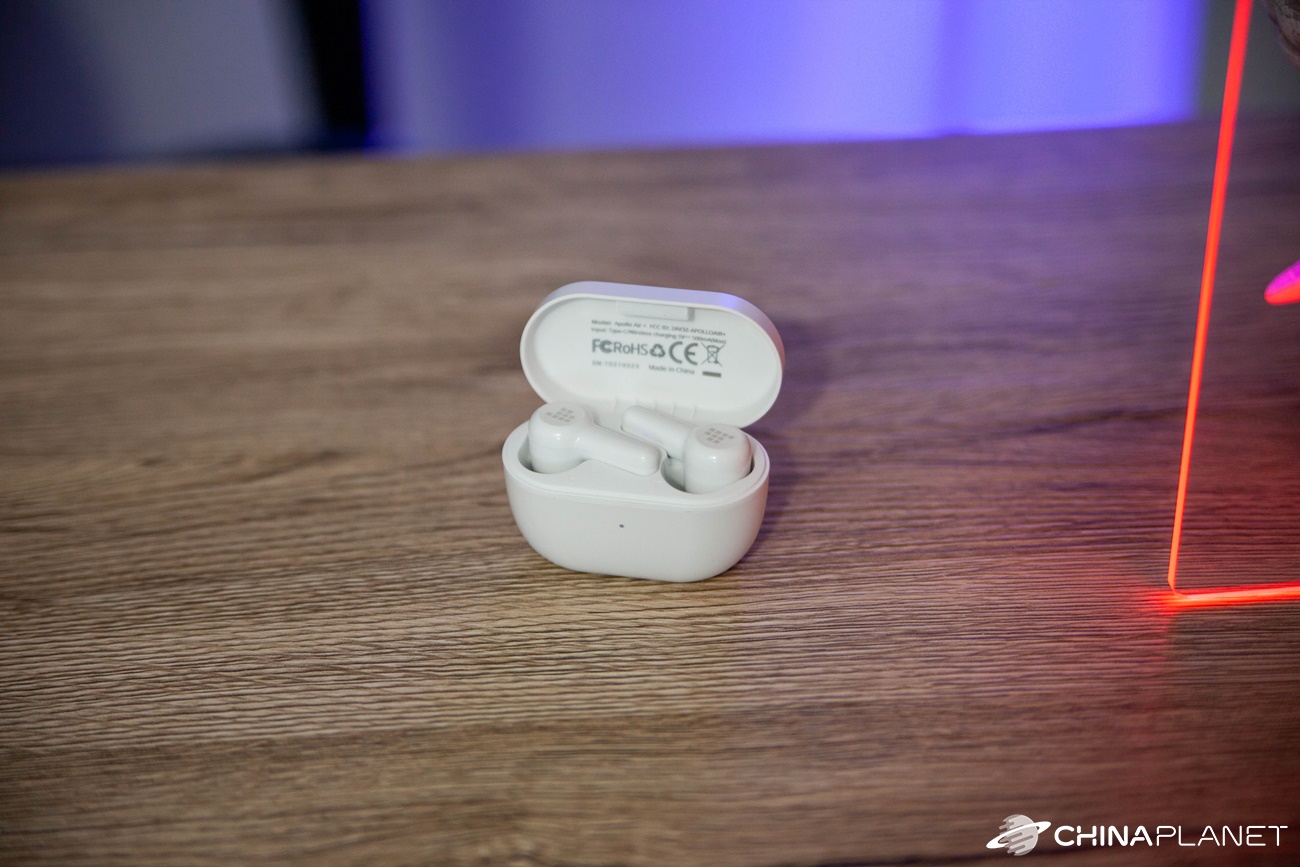 A distinctive feature of Tronsmart Apollo Air + is clearly wireless box charging. If you don't want to use a USB-C cable, you can just place it on the base of the wireless charger.

We therefore rate Tronsmart Apollo Air + as a very good piece for the € 50 price tag. Advanced users will enjoy the presence of the Qualcomm aptX Adaptive codec, in-app equalizer, wireless box charging and more advanced hybrid noise reduction. Slight downsides are not fully balanced heights, but we haven't seen that perfectly done with any similarly affordable wireless pegs, and it's a matter of much more expensive products. 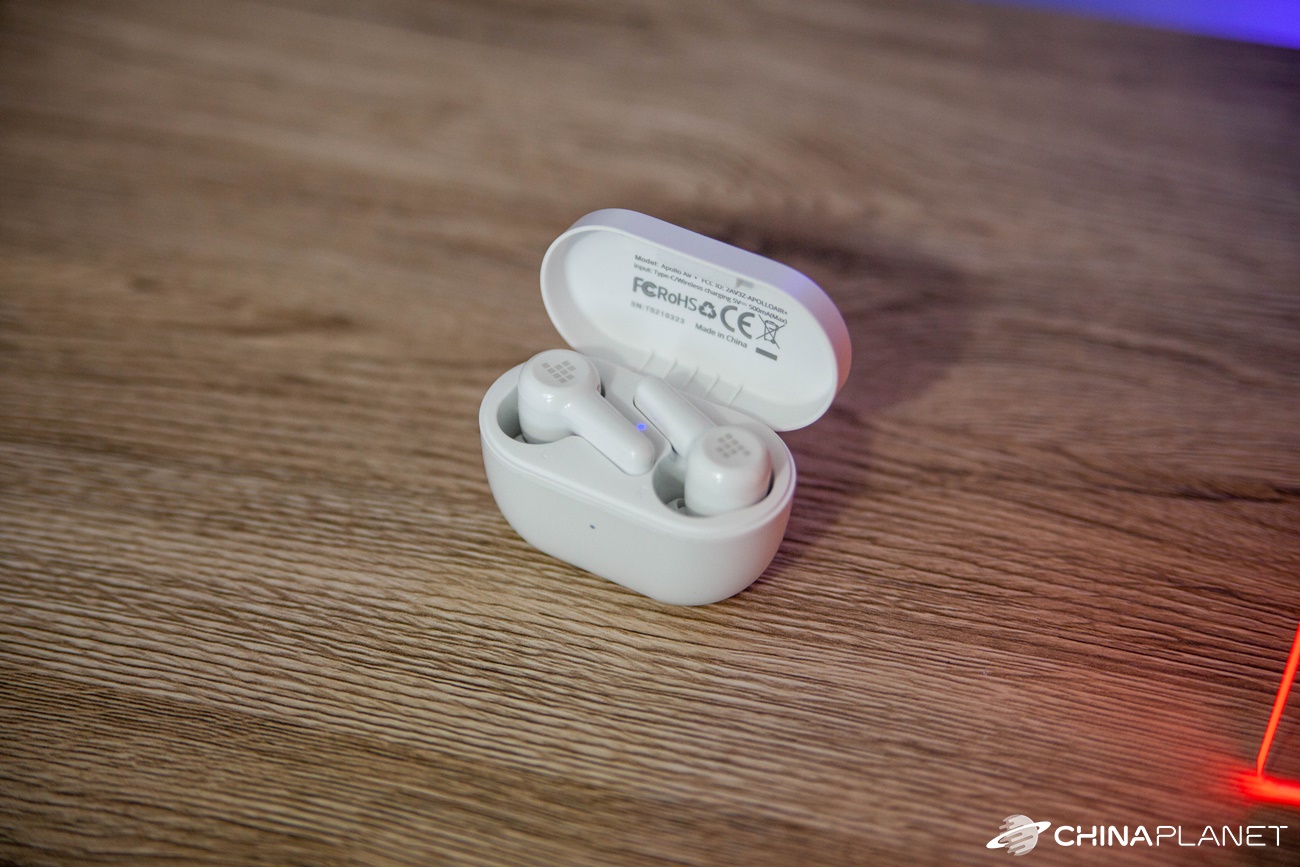 If you are looking for compact slots that will serve you when transporting in public transport or working at a computer, you can order Tronsmart Apollo Air + without any worries.