The significant Wanbo, which also belongs to the Xiaomi ecosystem, recently introduced a new projector. It's a model Wanbo t6 maxwhich we have been testing in detail for several weeks now. It impresses with the brightness of 550 ANSI lumens, the Android TV system, and also the elegant appearance.

Where to buy Wanbo T6 Max?

You can find Wanbo T6 Max directly in Czech warehouse at the international retailer Banggood, which also provided a special discount coupon. The advantage is express delivery within 7 working days, while you will not pay any additional fees.

At the time of writing, the projector was available for € 230, which is an extremely affordable price due to the projector's equipment and capabilities.

The Wanbo T6 Max projector arrived at us in a box measuring 25.5 x 24.5 x 24 cm and weighing 3.2 kg. It is packed in two boxes, which we perceive very positively. The outer cardboard box is stronger and will provide better protection against adverse handling during transport. 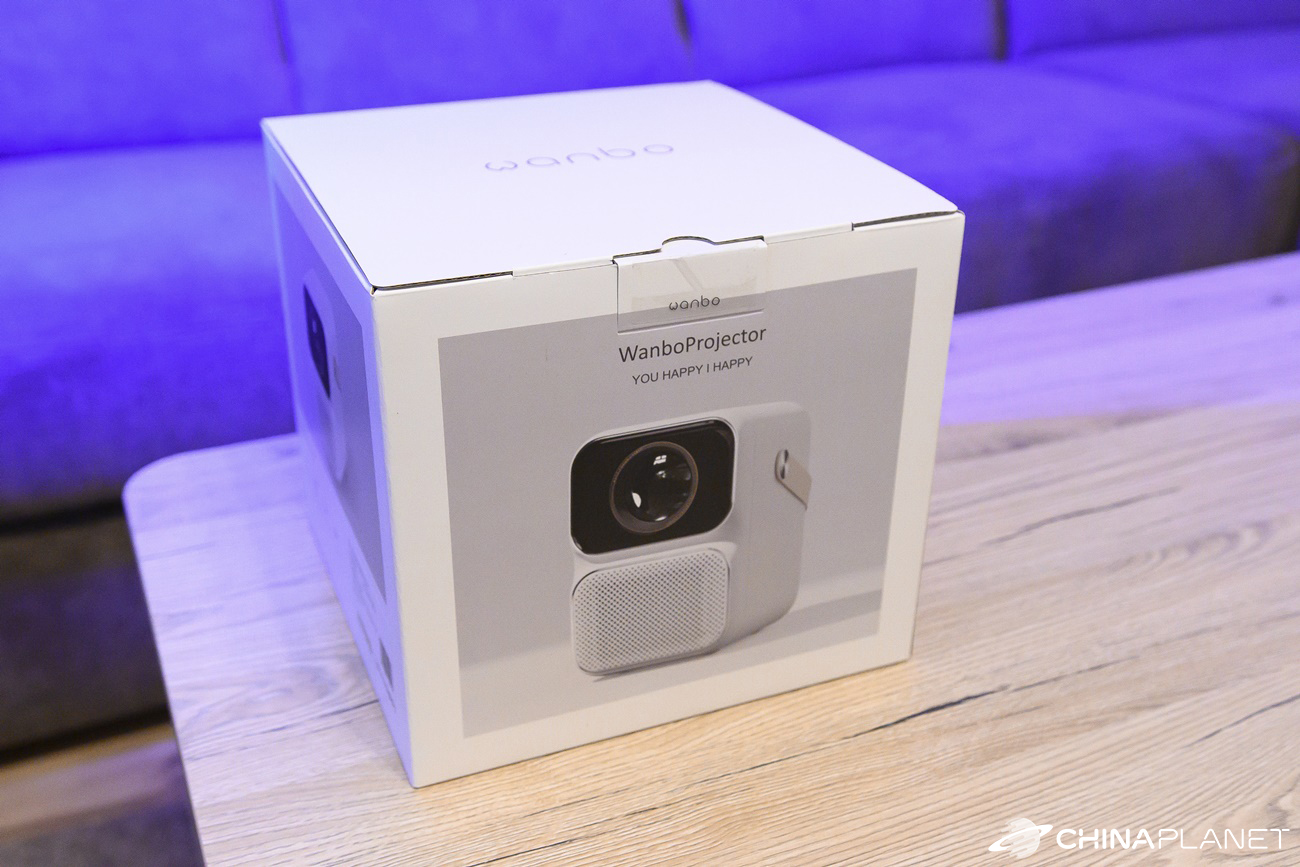 The projector is protected in its box by a pair of foam reinforcements, from the top and bottom. It is thus sufficiently protected. As for the contents of the package, in addition to the projector itself, we will find a power cord with an adapter, a remote control and a brief instruction manual. 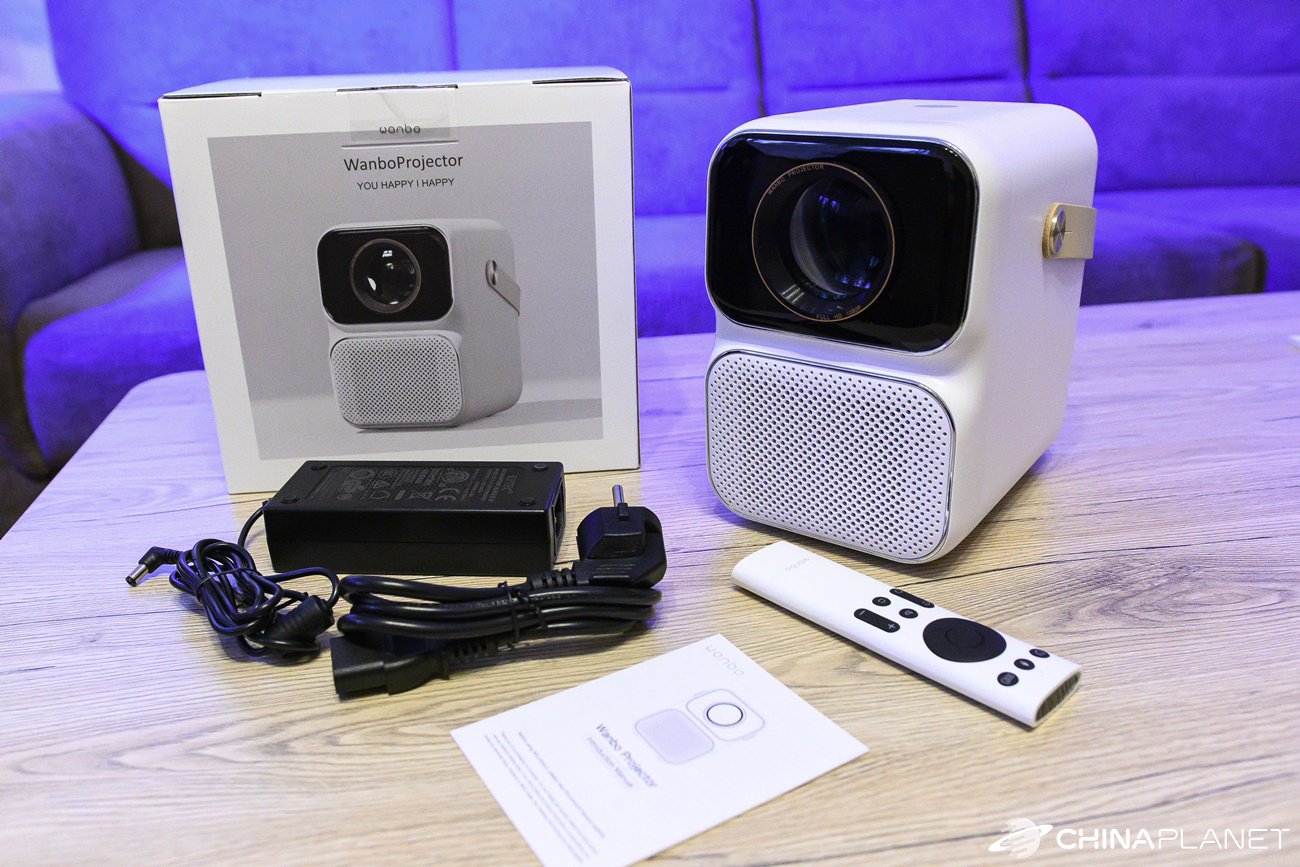 Design and layout of elements

In terms of design, the Wanbo T6 Max is very similar to the T2 Max model, which we also recently tested. The design of the projector differs considerably from classic projectors, which we all know well. Most of them are flat, wide, while the Wanbo brand has chosen portrait orientation for the T2 and T6 models. 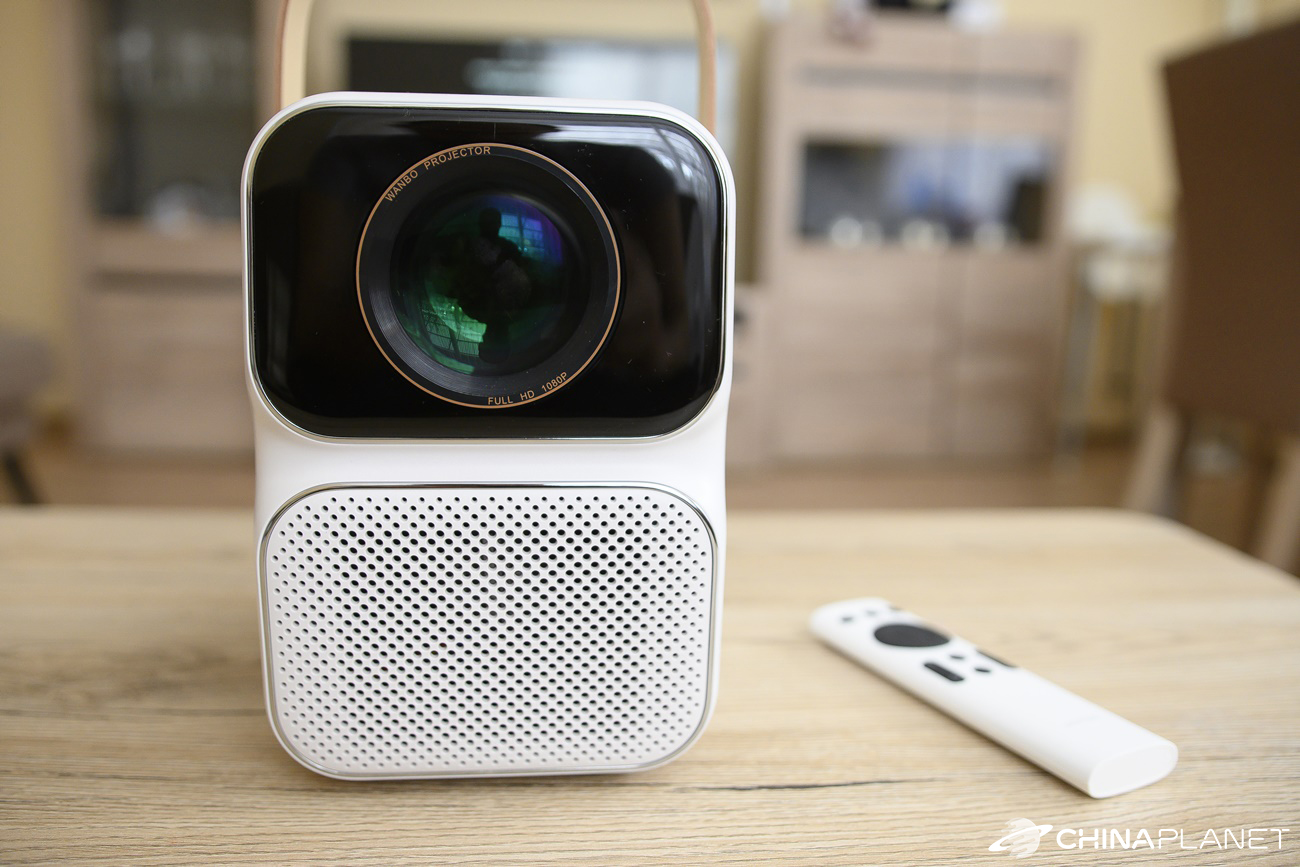 The projector is free standing. At the bottom we find rubberized feet and a thread for a standard tripod. The front part is dominated by a lens with black edging, under which we find a grille for the output of warm air from cooling. The rear has a port for connection to the mains, input ports and a grille for speakers and cold air intake. 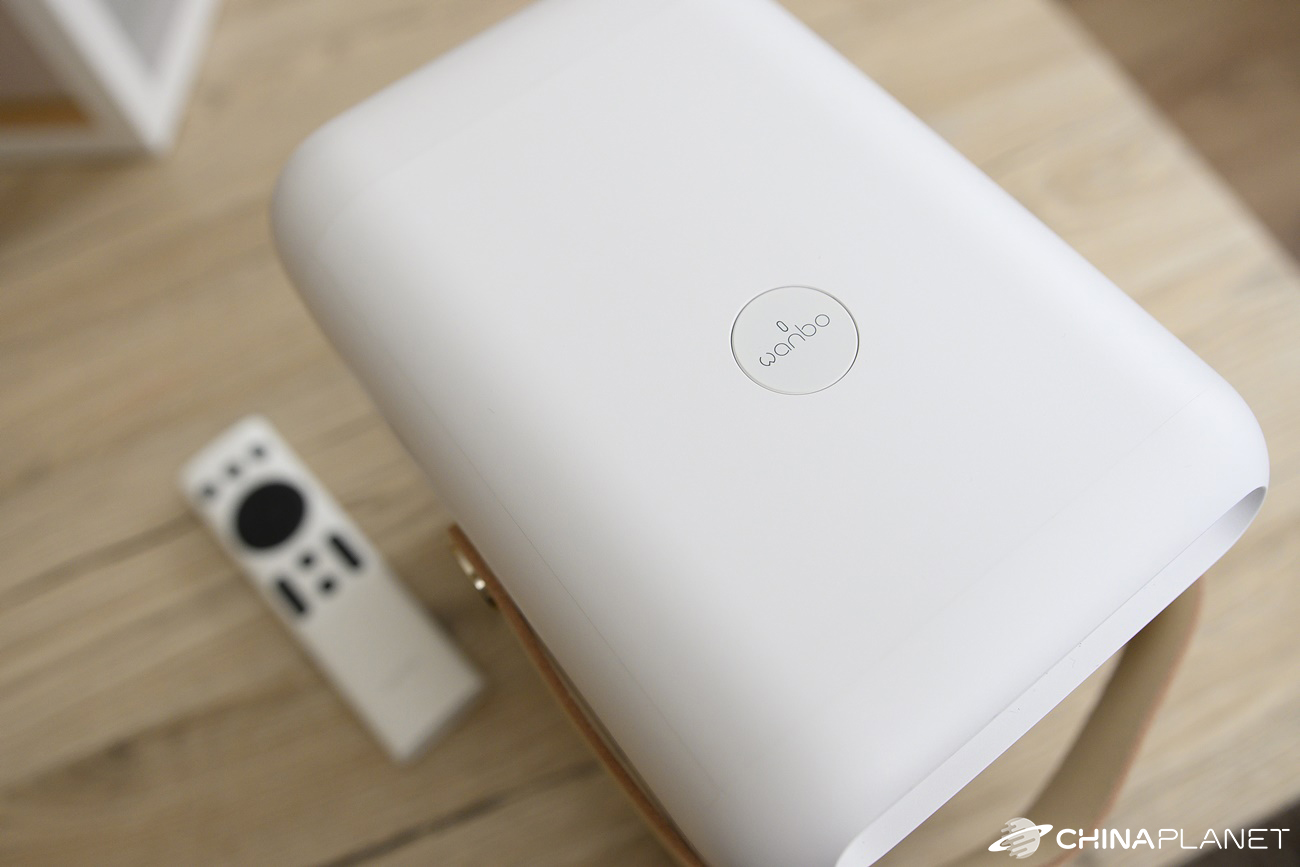 At the top there is only one round button, which is used to turn on or off. The projector contains another interesting feature. It is a leather strap for easier carrying, which also improves the overall design of the projector.

The Wanbo T6 Max is similar to its smaller brother, the T2 Max, made of plastic. However, plastics look good and the overall impression is very good. 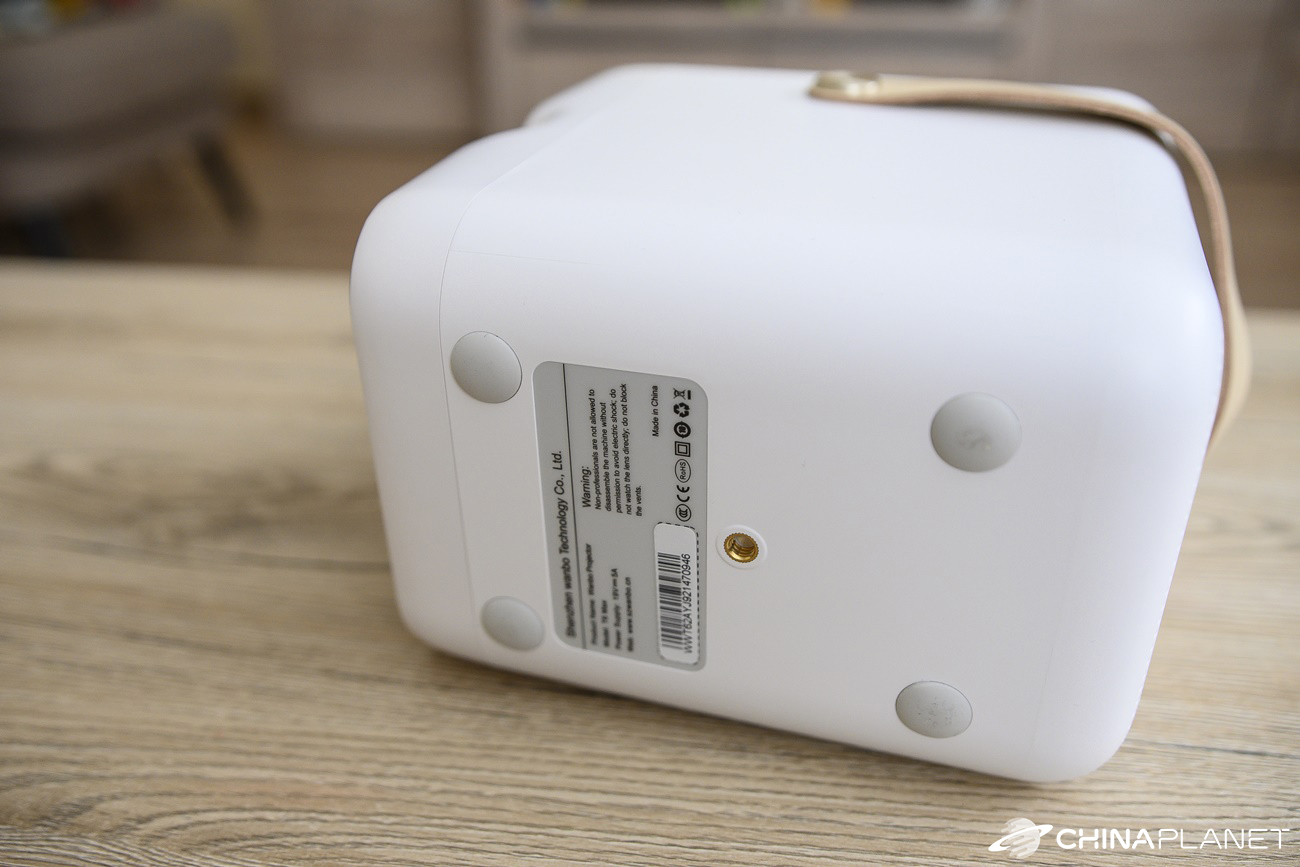 However, we have reservations about the tripod thread, which is not deep enough. We tried to mount the projector on 3 tripods from different brands, but neither of them could be screwed all the way in, so we had to place a few more pads under the projector to hold it firmly on the tripod and not sway at every touch. 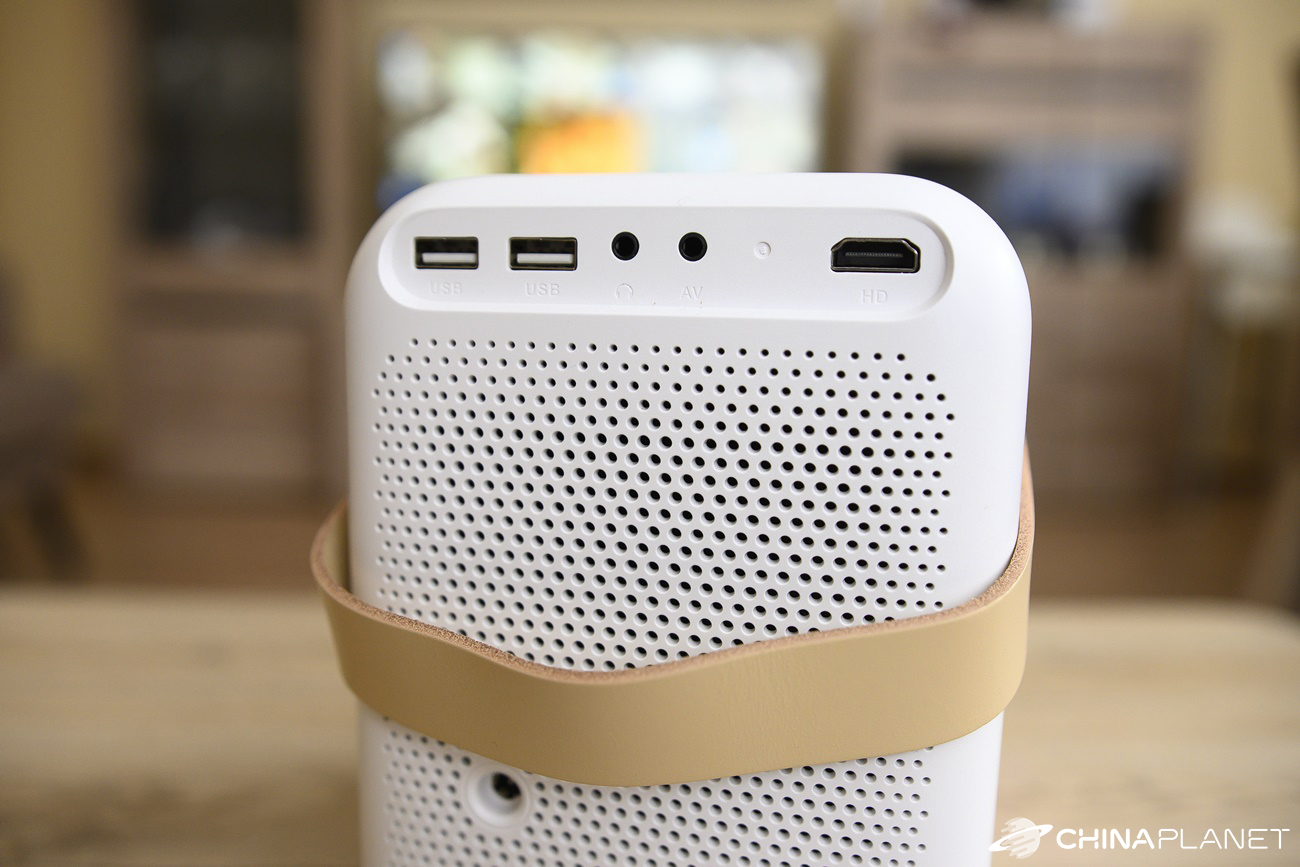 In terms of connectivity, in the back we have a pair of USB ports, HDMI, 3.5 mm headphone port and AV input.

The novelty from the Wanbo brand will delight up to 550 lumens, which is more than double the T2 Max model. While the mentioned weaker model was only usable when shading the room or in complete darkness, the T6 Max is much better. 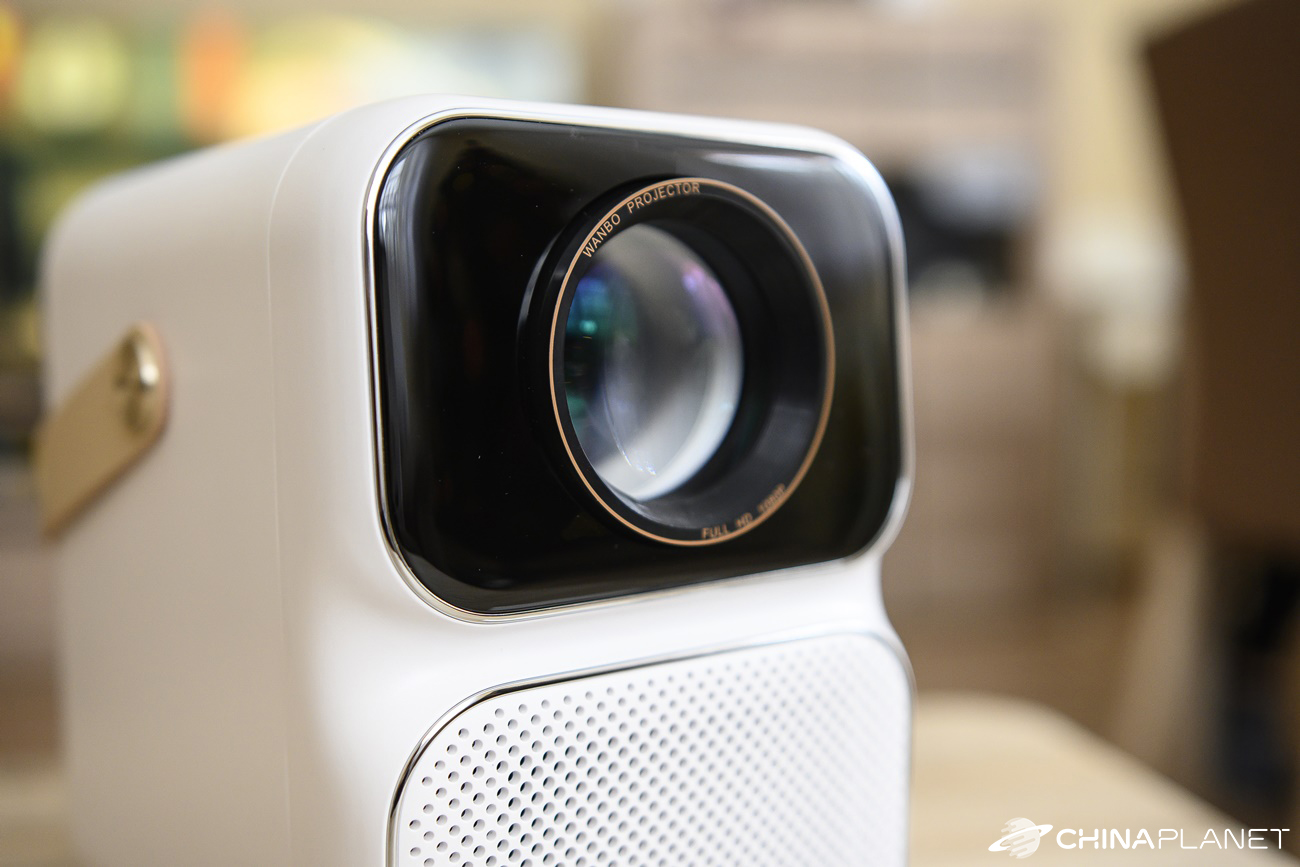 Of course, these are still not the highest values, but for comparison, the much more expensive Xiaomi Mi Smart Projector Mini has a brightness of 500 ANSI lumens. An LED lamp is used as the light source, so the projector is maintenance-free.

The image is relatively well visible even in daylight, but for the maximum experience of a nice image, it is of course necessary to shade the room. The colors are colorful, rich enough and the overall picture is excellent. 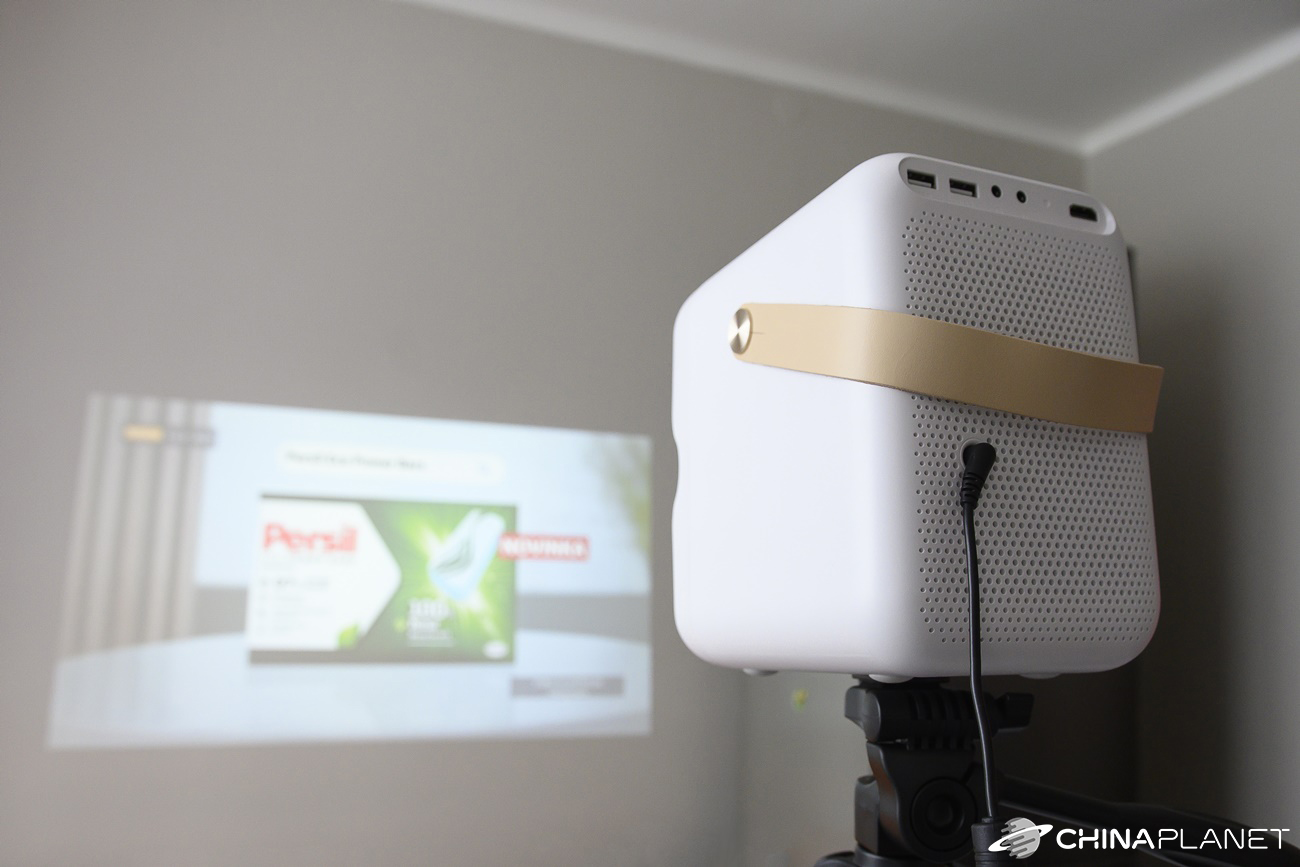 The manufacturer does not state the maximum and minimum distance of the projector from the wall or screen, nor the size of the image at different distances. 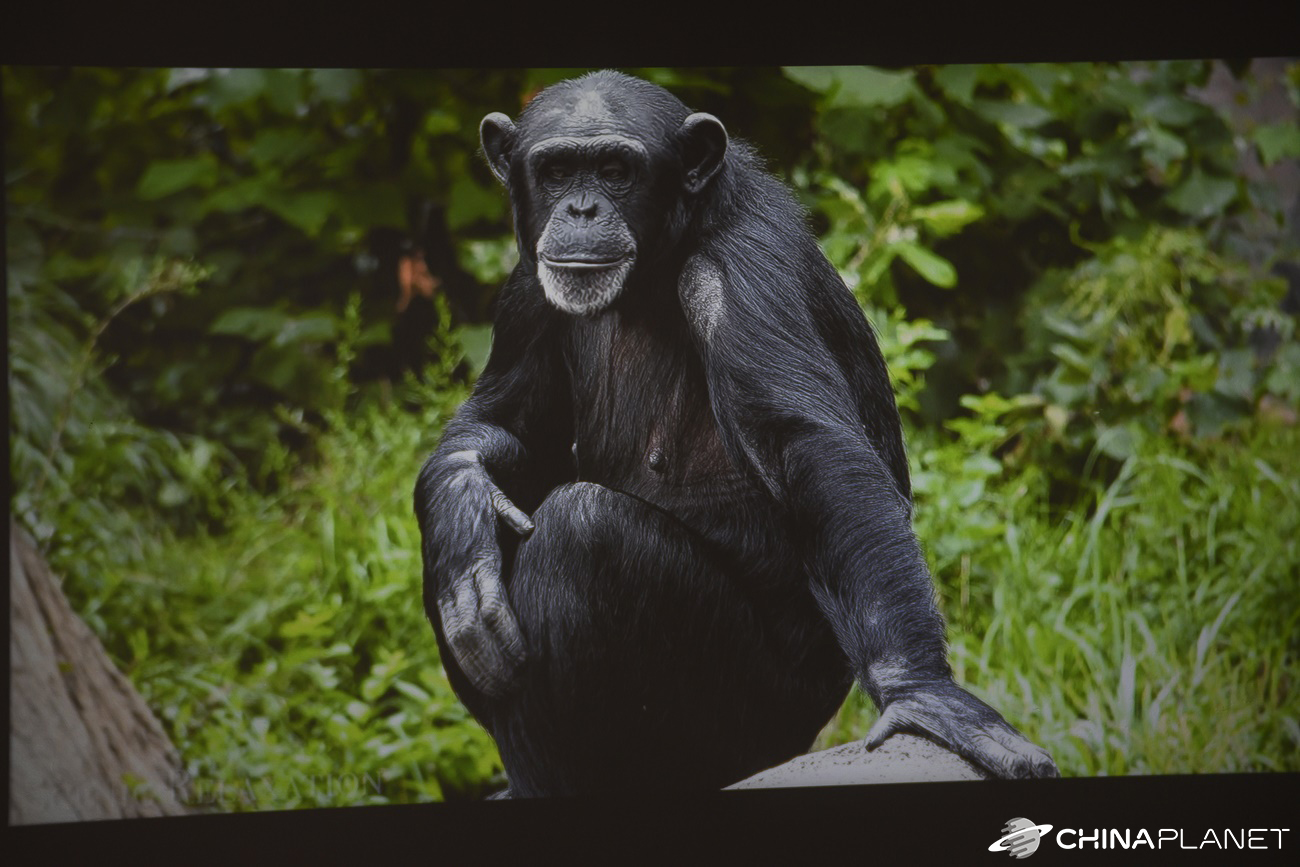 If you read the section on the layout of the individual elements carefully, you must have noticed that we did not mention any image focusing wheel. The Wanbo T6 Max has a motorized, electric focus using a pair of buttons on the remote control. 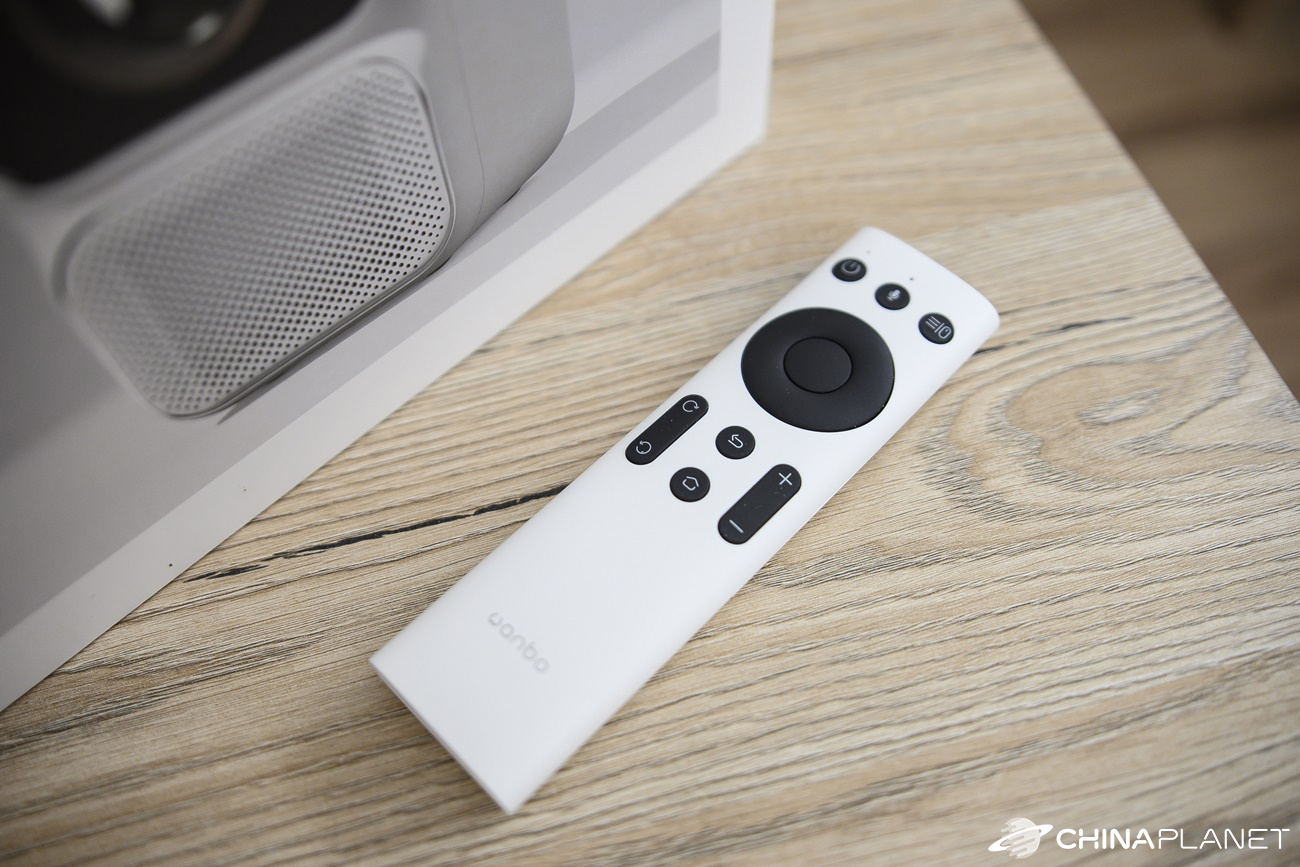 Unlike conventional projectors, which have a focus wheel to sharpen the image, in this case you do not have to get up from the comfort of your sofa, but simply focus using the remote control.

The mentioned remote control is white and very compact. It has on / off buttons, voice control, cursor control on, focus, volume control, return button and home button. There is also a classic round selector in the middle of the controller with four directional buttons and a confirmation button in the middle. 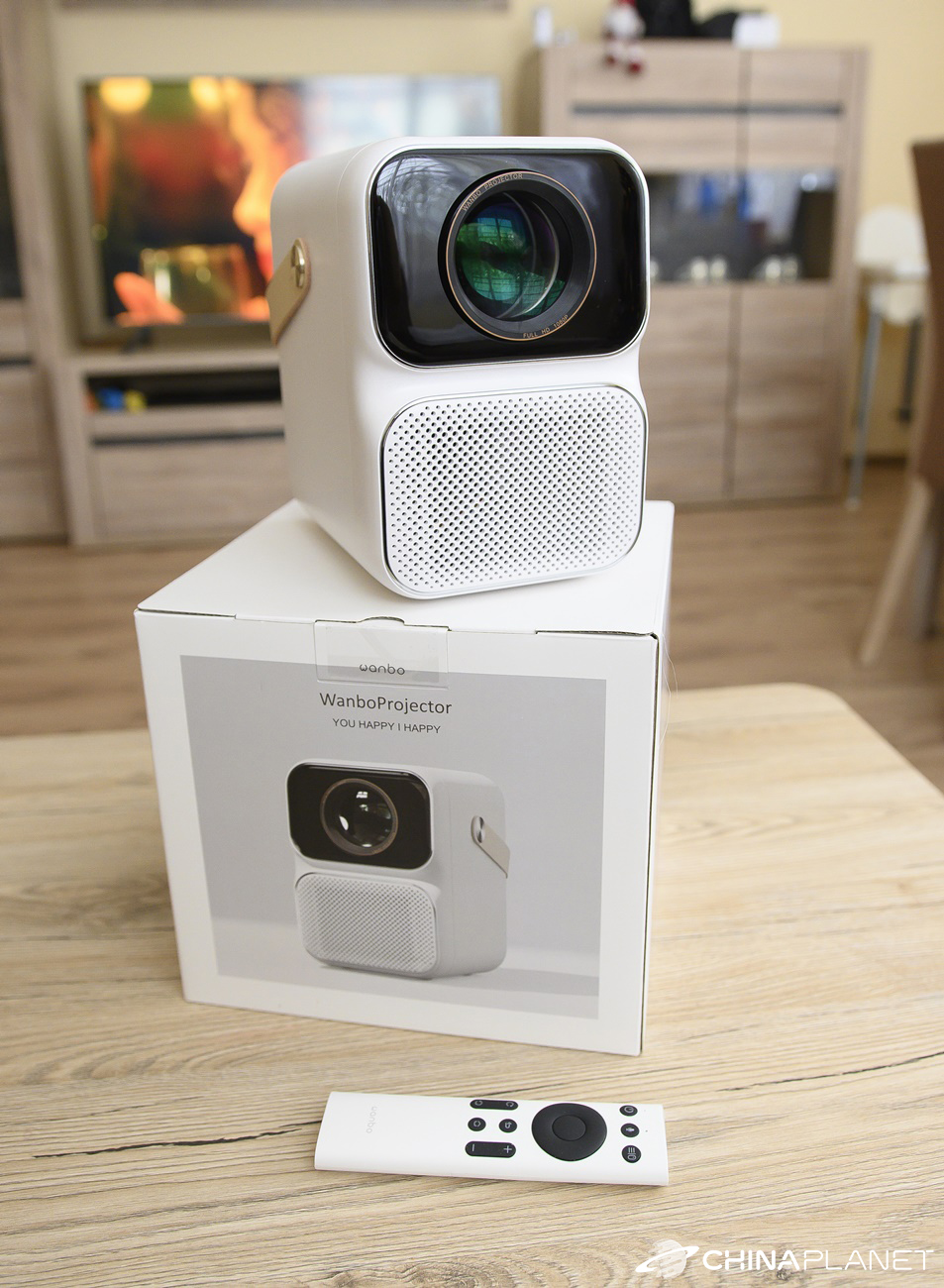 A pair of non-included AAA batteries is required for power. Overall, the remote control works very well and there is no need to point it at the projector.

The Wanbo T6 Max projector has a built-in Android TV system in version 9.0. Unlike the T2 Max model, the environment in this model is much nicer.

By design, this is the environment we know from the Xiaomi TV, Mi TV 4S, which we own. The home screen consists of several elements. Presets include the view of selected apps, the YouTube channel of your favorite videos, and YouTube Music. You can add more YouTube channels (Featured and Trends), as well as movies from Google Play Movies. 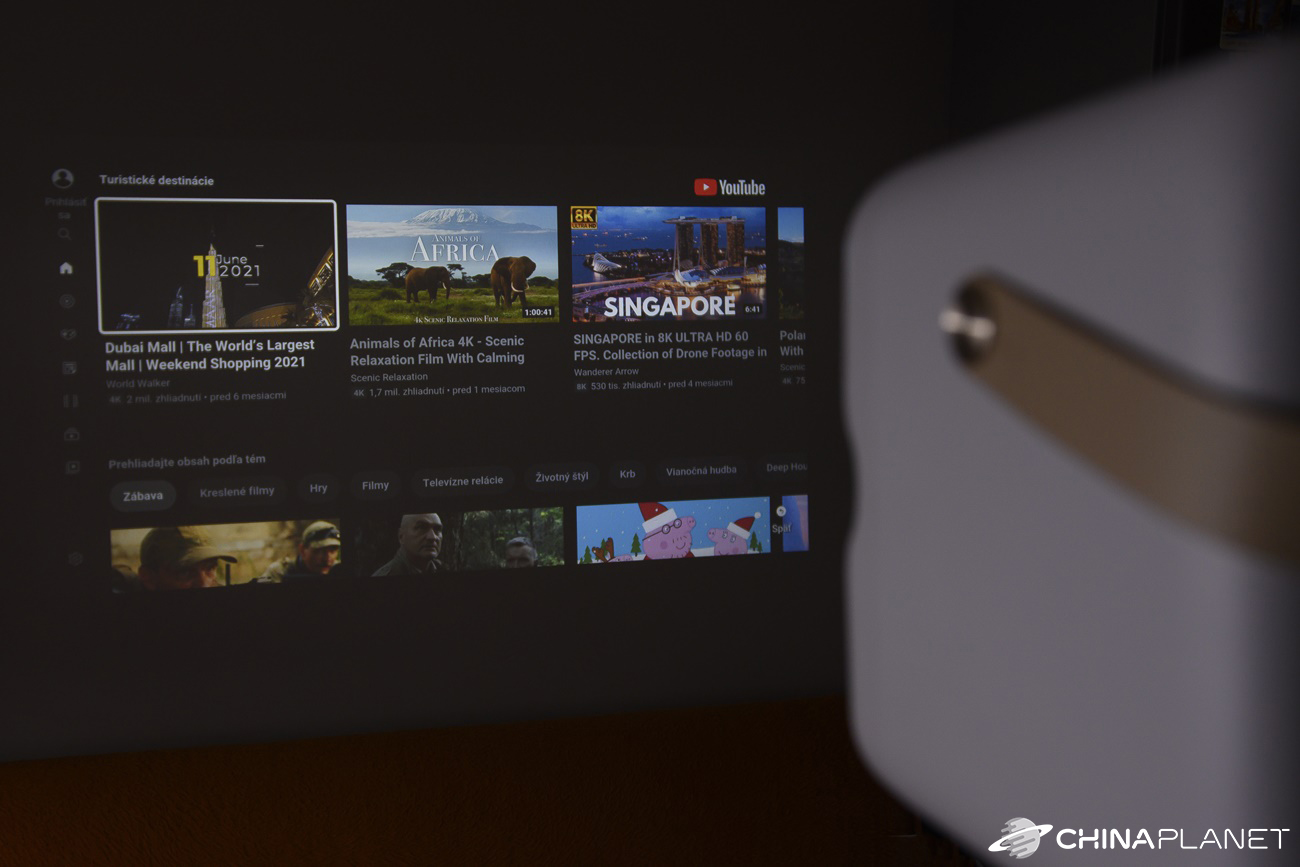 At the top is a bar for quick search, notification, settings and current time.

You will find quite a lot of pre-installed applications here. Applications on the home screen include prime video, Netflix, YouTube, Google Play Store, MX Player, File Browser, and a "+" button to add more.

Other pre-installed applications include: Disney +, Google Play Movies, Google Play Games, Hulu, iMirror, KODI, LenKey Keyboard, Live TV, Media Center, MoviePlayer, Tubi, Chrome and EShareServer. iMiror is used to share content via AirPlay, but the projector does not have a Chromecast and this feature did not work for us after the Chromecast built-in app was installed.

You can download more apps from the Google Play store. Here you will find, for example, applications for watching TV such as Skylink, HBO GO, Orange TV, SWAN GO and many others. However, the offer is limited and compared to the Android TV system on the Xiaomi Mi TV 4S, the Google Play store on the projector offers fewer applications. However, you can also download the .apk file through a browser and install applications this way.

The projector is powered by an Amlogic 972 processor, which is seconded by 2 GB of DDR4 RAM. In this case, the internal storage has a capacity of 16 GB. The Android TV environment is extremely smooth, and we haven't seen any jams or slow-down responses throughout the testing period. 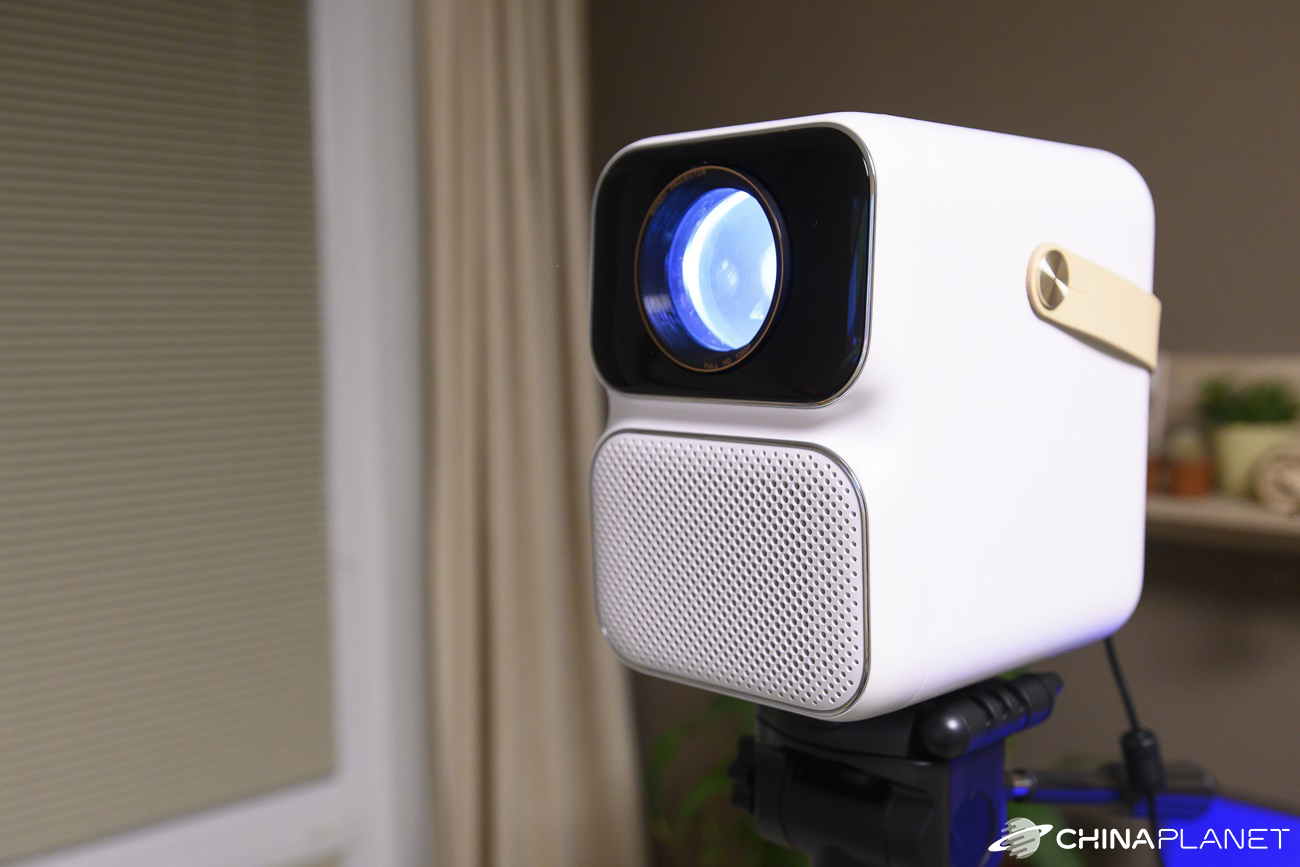 Both 2.4 GHz and 5 GHz WiFi support will be pleased. The system settings are adapted to the projector. Here you will find remote control settings and accessories where you can pair a Bluetooth device, as the included remote control also works using Bluetooth technology. 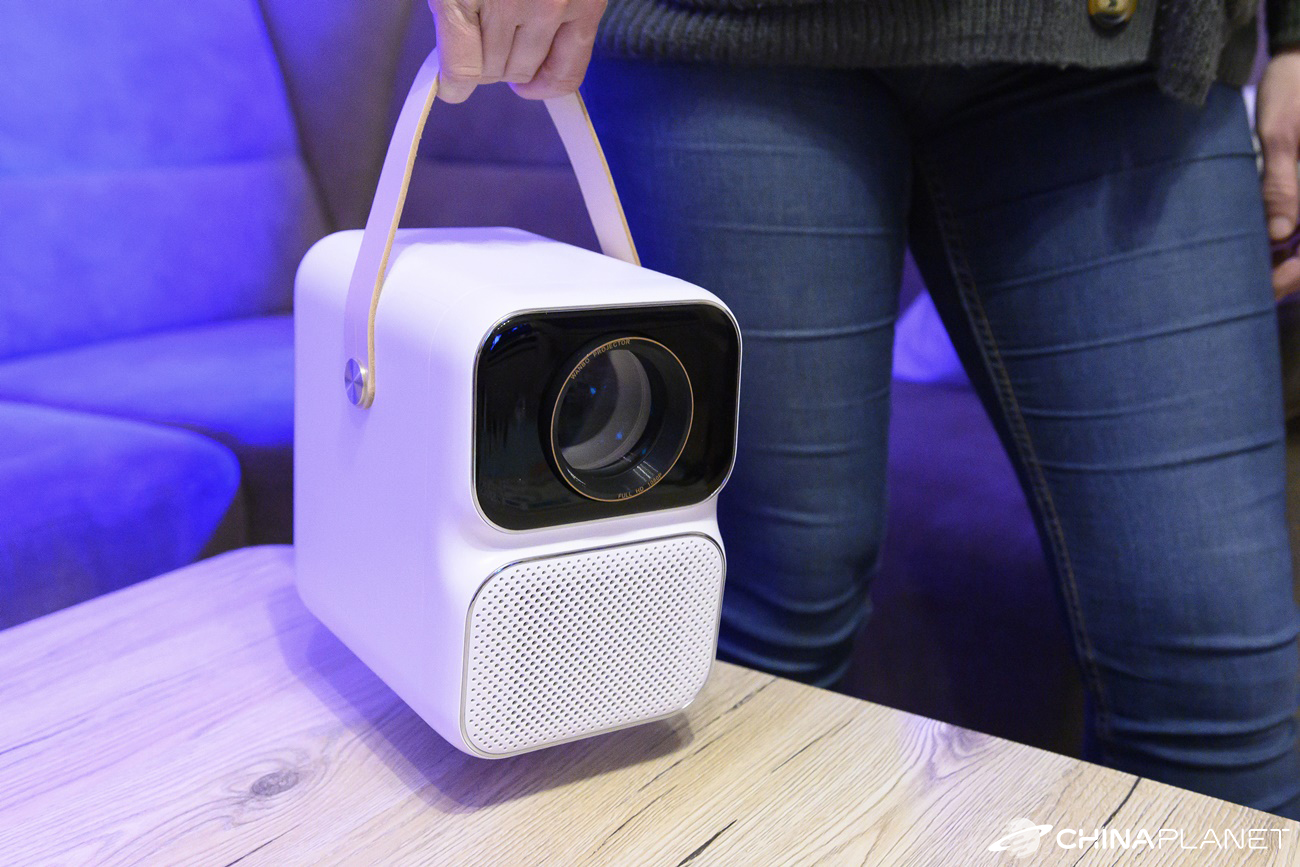 Projector-specific settings offer image rotation depending on the location of the projector, so you can mount it on the ceiling. There is no lack of adjustment of individual corners, the so-called keystone with support for automatic or manual setting. You can zoom in or out using the Zoom function, and you can also set the aspect ratio to 4: 3 or 16: 9.

You can see the settings, as well as the entire Android TV environment, in the following video:

In the settings you can also change the keyboard, the order of applications in the menu, customize the channels on the main screen or change the language. As this is a global version, Slovak and Czech are available. 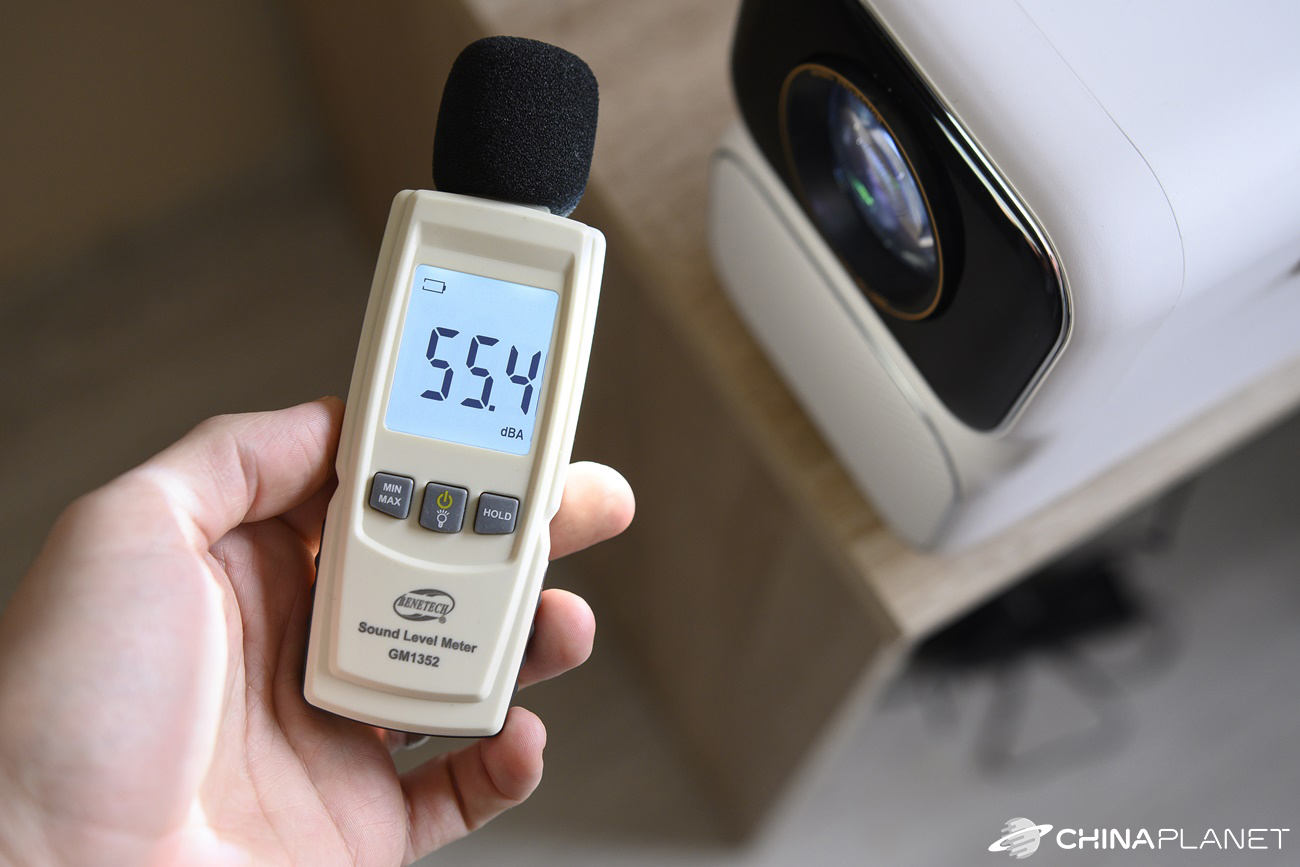 When watching videos or movies, you need to set the volume to a relatively high level to keep the noise from rising. It is a pity that the manufacturer did not solve the cooling with more significant soundproofing.

As for the speakers, we'll find two here. Each has 5 W and is located at the back of the projector. The sound quality is quite good, but more pronounced bass is missing. We recommend connecting external speakers or a soundbar, which will greatly enhance the movie viewing experience.

Wanbo T6 Max is an LED projector with an interesting design and attractive price. For less than 300 EUR, it offers a decent brightness of 550 ANSI lumens, which beats even significantly more expensive projectors. Thanks to this brightness, it can also be used during daylight, but for maximum experience it is necessary to shade the room at least slightly. 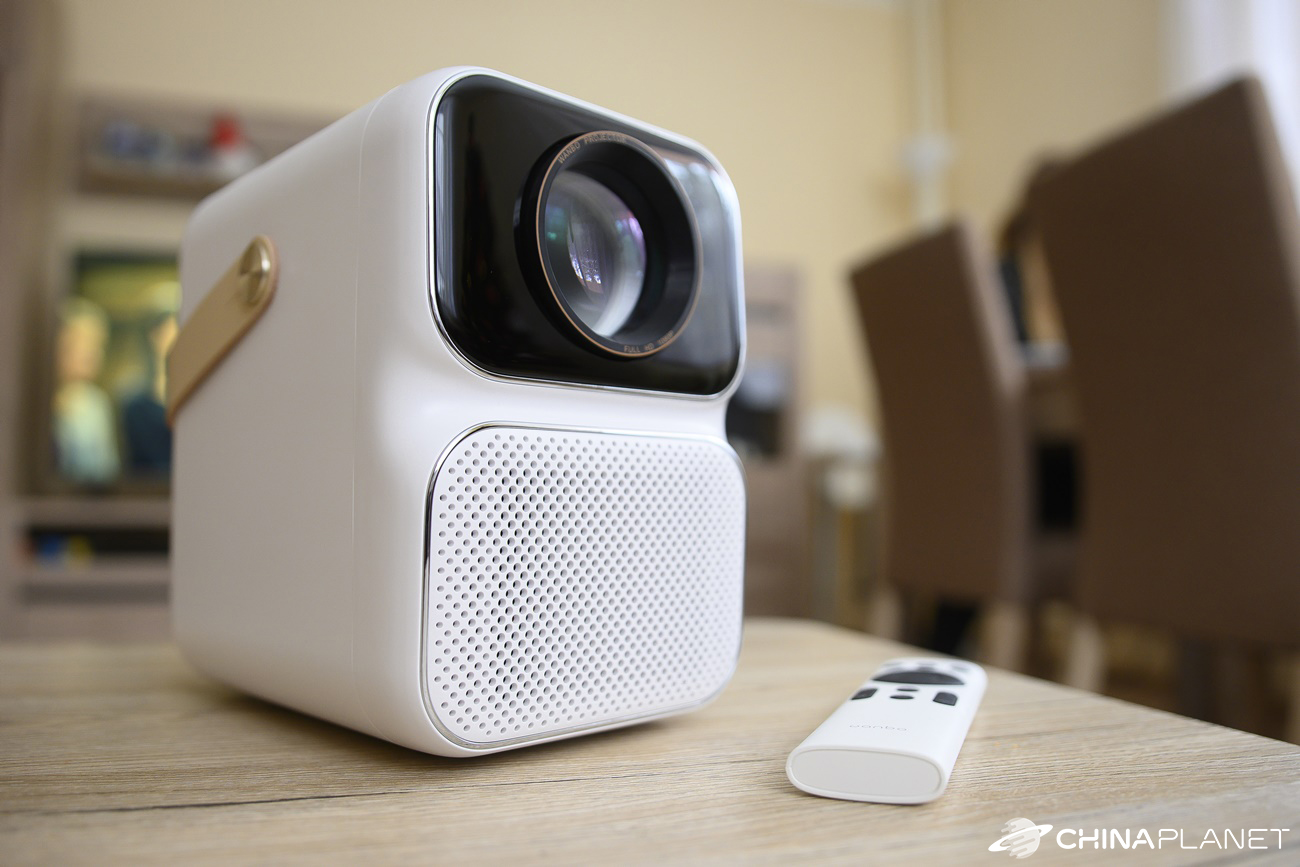 It will please the Android TV system with a clear and modern environment, which we know, for example, from TVs from the Xiaomi brand. The environment is extremely smooth and the remote control works very well.

Negatives include higher noise, average speakers and a tripod thread that does not have enough depth for a stable grip without modifications.

Alldocube iPlay 40 Pro has a slightly larger battery, up to 256 GB storage, newer Android 11 and a coupon in CZ stock