[REVIEW] Redmi 10 is the cheapest smartphone from the Xiaomi subsidiary

[REVIEW] What is the cheapest smartphone from Redmi? We tested the basic Redmi 10 model

The lowest model from the Xiaomi subsidiary is a novelty with the designation redmi 10. It is traditionally the cheapest smartphone from the Redmi series, which is designed for undemanding users. We thoroughly tested it in the editorial office and now we bring you our review.

The Redmi 10 smartphone is currently available from the official Xiaomi dealer, Gaboo. It will please availability in a Spanish warehouse, thanks to which express delivery will be fast and trouble-free. You will also avoid any unwanted extra charges.

A huge advantage is official 2-year warranty on a smartphone a possibility of returning the goods within 14 days. There is also a new discount coupon worth a decent € 25. 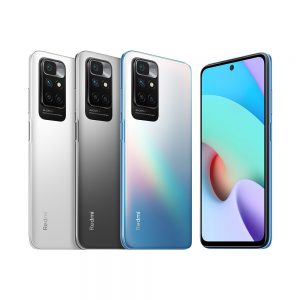 I want it
Are you shopping on Goboo for the first time? See instructions!

TIP:Express delivery from a Spanish warehouse.

This product will be delivered to you expressly from your local Spanish warehouse. Delivery from Spain usually takes 7-10 days and is delivered by courier. You do not pay any extra fees, no customs duties or VAT on delivery.

I want it
Are you shopping on Goboo for the first time? See instructions!

TIP:Express delivery from a Spanish warehouse.

This product will be delivered to you expressly from your local Spanish warehouse. Delivery from Spain usually takes 7-10 days and is delivered by courier. You do not pay any extra fees, no customs duties or VAT on delivery.

Redmi 10 comes in a traditional package that we all know well. The white box with the Xiaomi logo and the image of the smartphone measures 17.6 x 9 x 6 cm. Inside there is a flat paper box with a transparent, silicone case, a smartphone and also a charger with a USB-C charging cable. 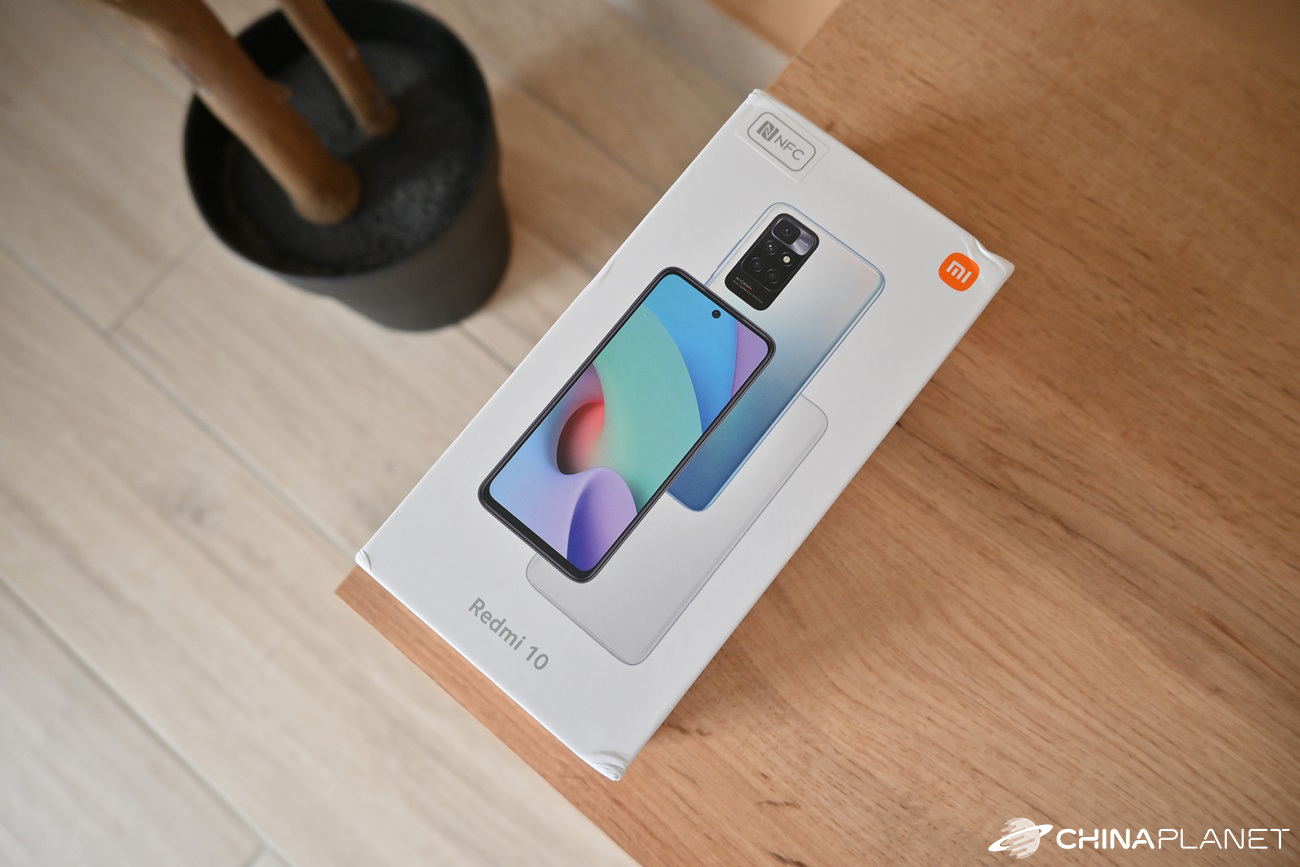 The smartphone is of course plastic in this price category, which is immediately felt even at its weight, which is only 181 g. Despite the fact that it is the cheapest smartphone from Redmi, the processing is good and we have no reservations about it. 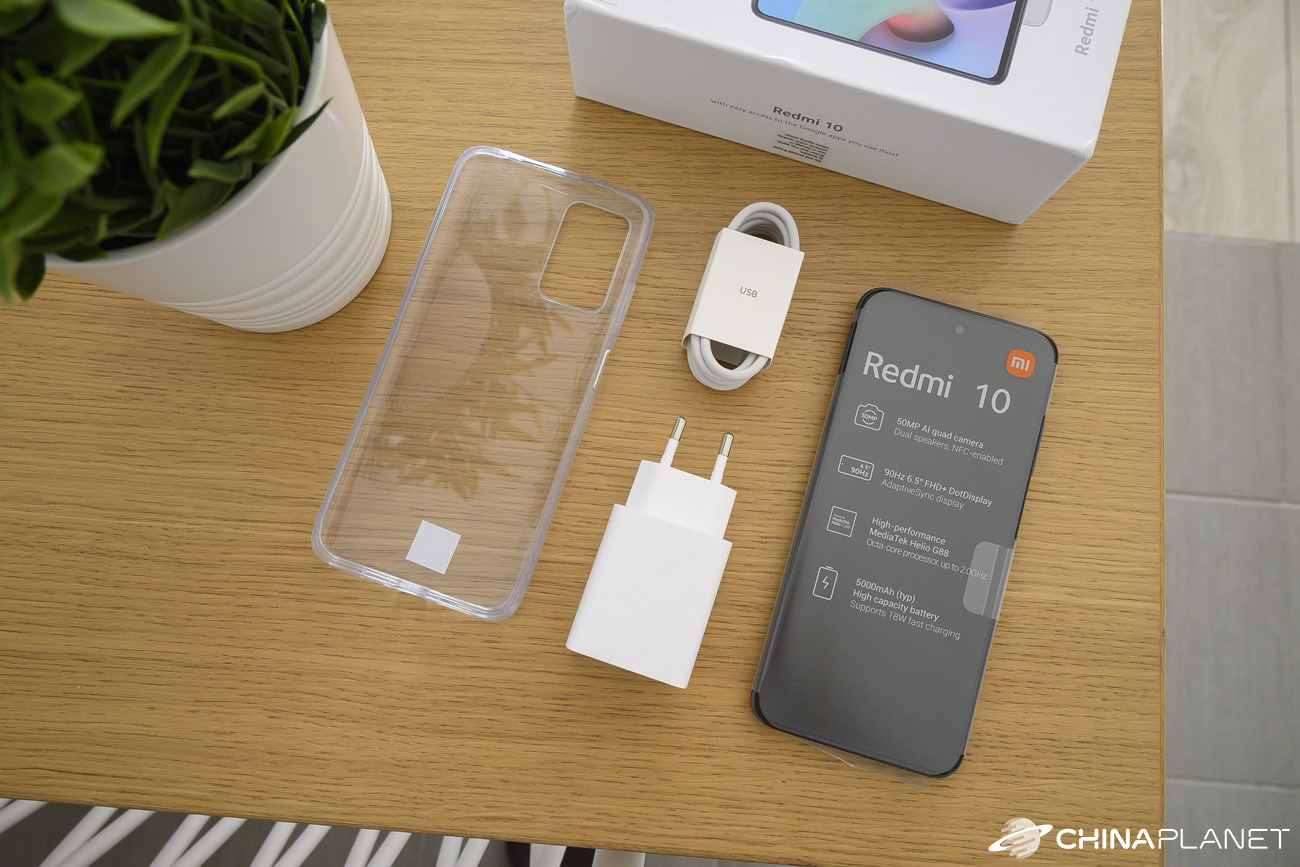 Design and layout of elements

In terms of design, the Redmi 10 does not deviate from the standard in any way, so we will not find anything unusual here. We had a smartphone available in Carbon Gray (gray, matte). In addition to this color, Pebble White (white, matte) and Sea Blue (blue, glossy) are also available. 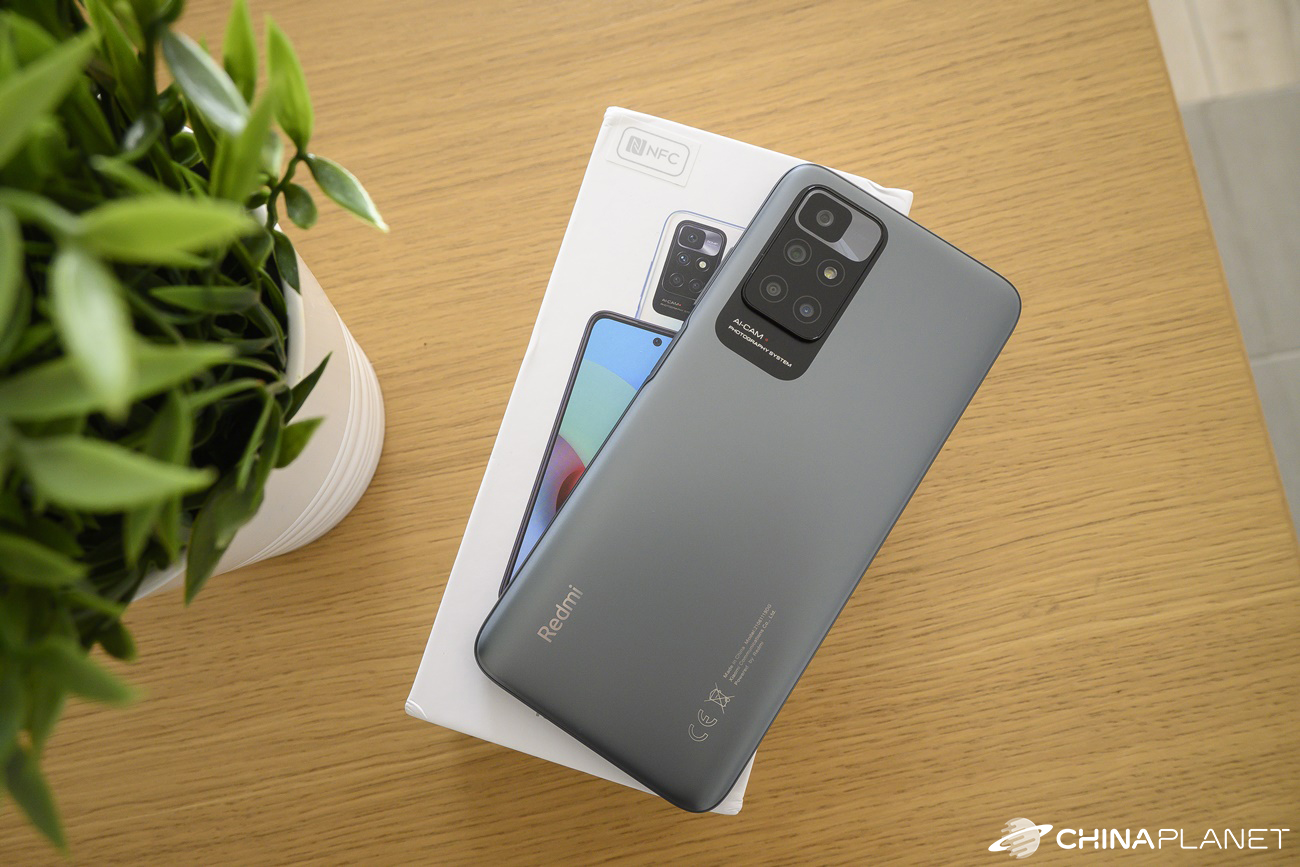 There is a SIM card slot on the left side of the smartphone. It can hold up to 2 SIM cards and at the same time a memory card up to a maximum capacity of 512 GB. The right edge features a traditional two-button volume control and an on / off button with integrated fingerprint reader.

The bottom is home to a USB-C charging port, microphone and speaker. On the opposite, upper side we find a light sensor, a second microphone, but also a second speaker. There is also a 3.5 mm headphone jack. On the back we find a camera module with an LED diode.

We appreciate that the basic model of the Redmi brand also has stereo speakers and still offers a 3.5 mm jack. The smartphone nowadays has relatively compact dimensions, thickness 8.92 mm, so it is very comfortable to hold in the hand. The included silicone case is slightly thicker than we would like, but it will protect your smartphone well.

Redmi 10 received a 6.5 ″ FHD + display with space for the front camera. It is quite large and is located in the middle of the upper part of the display. The display resolution is 2400 x 1080 px with a density of 405 ppi. It is protected by Gorilla Glass 3 and of course it is an IPS display, not AMOLED. 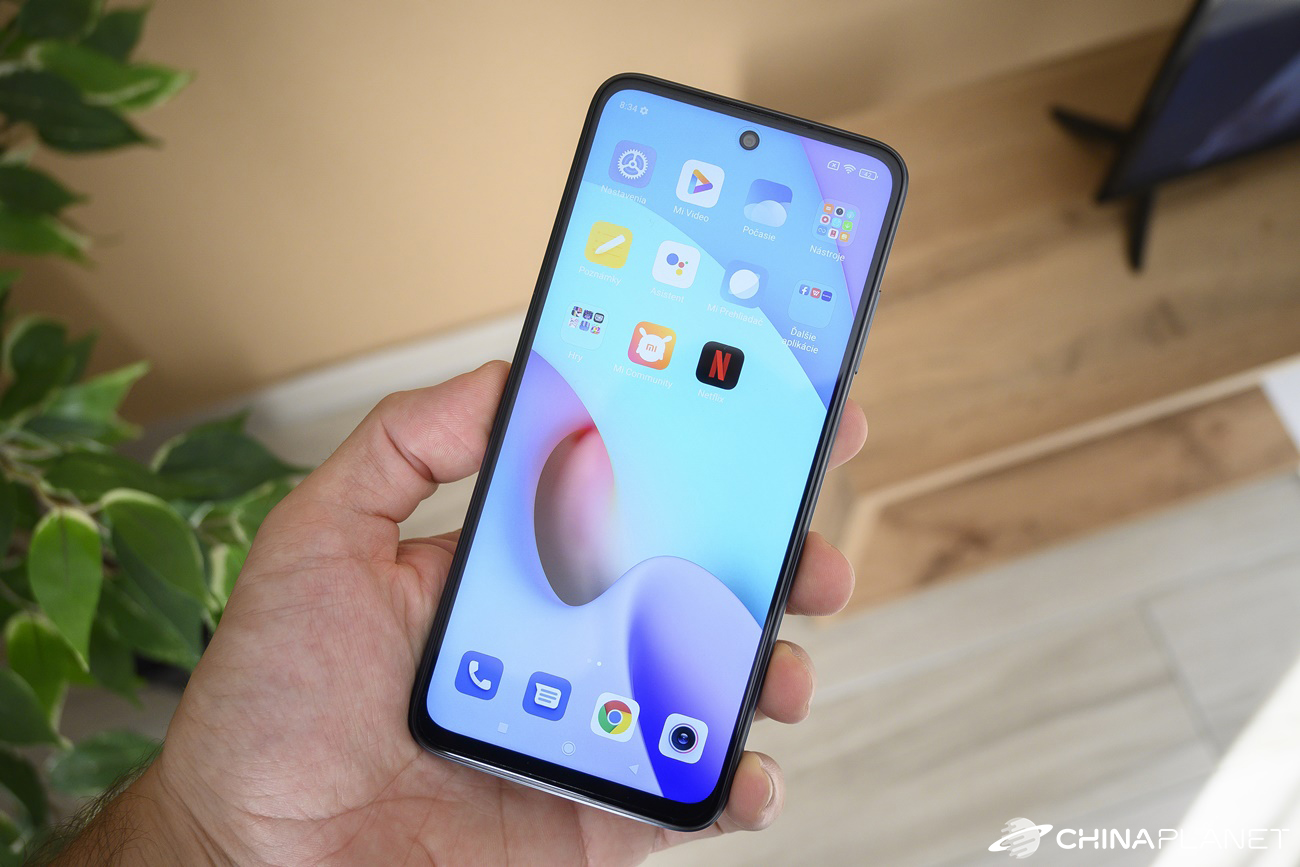 However, it has a higher refresh rate than conventional IPS displays. In this case, it's 90 Hz, and there is also the AdaptiveSync function, which is usually only found in more expensive smartphones. It saves energy by switching between 45, 60 and 90 Hz based on current demand. 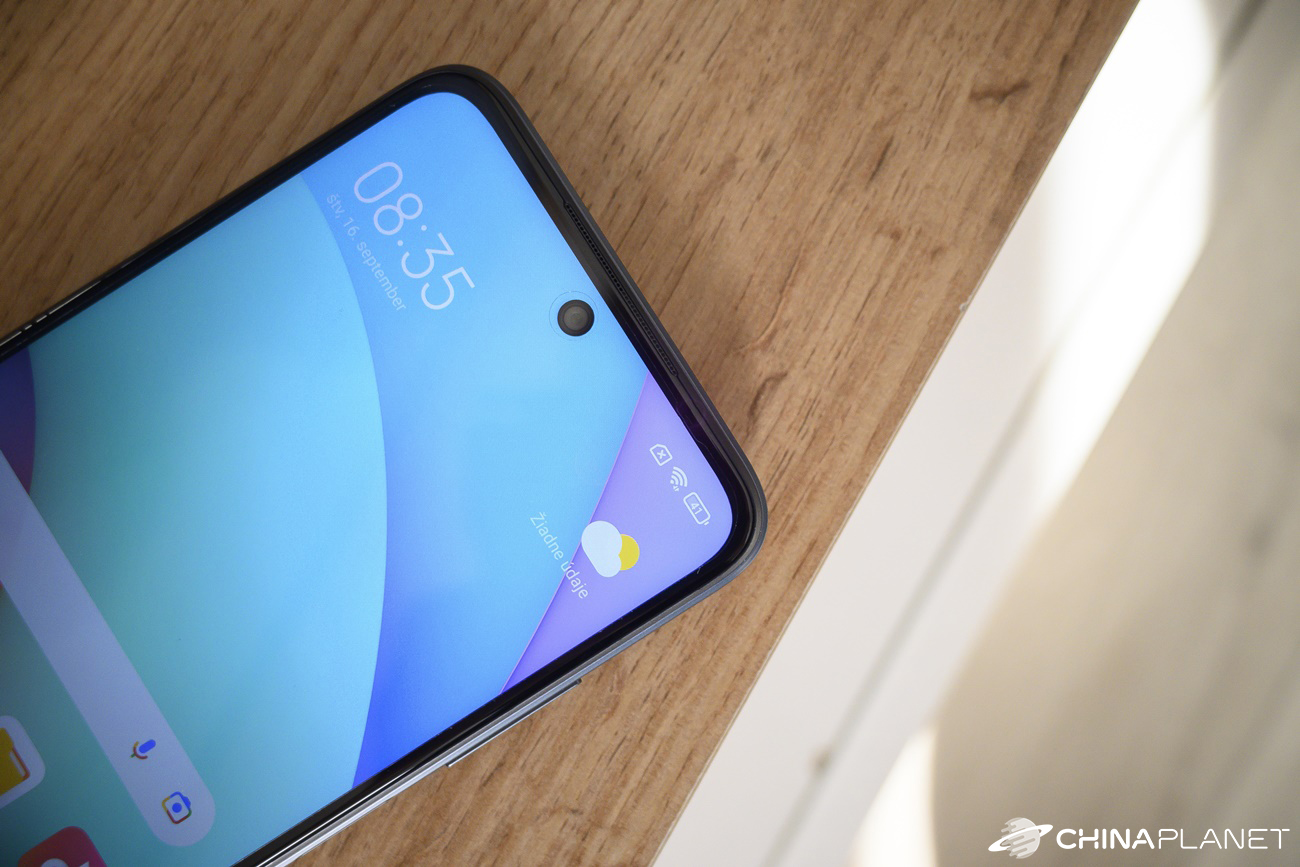 The display is smooth thanks to the higher refresh rate, but don't expect any miracles. At first glance, this is more of an average IPS panel. The colors have a cooler to blue tinge and are not too rich. However, its brightness is good and visibility in direct sunlight is sufficient.

This time the performance is taken care of by a processor from MediaTek, Helio G88. It is an eight-core processor, which consists of two Arm Cortex-A75 cores with a frequency of 2 GHz and six Arm Cortex-A55 cores clocked at 1.8 GHz. The processor is manufactured using 12 nm technology and is followed by the Arm Mali-G52 graphics chip. 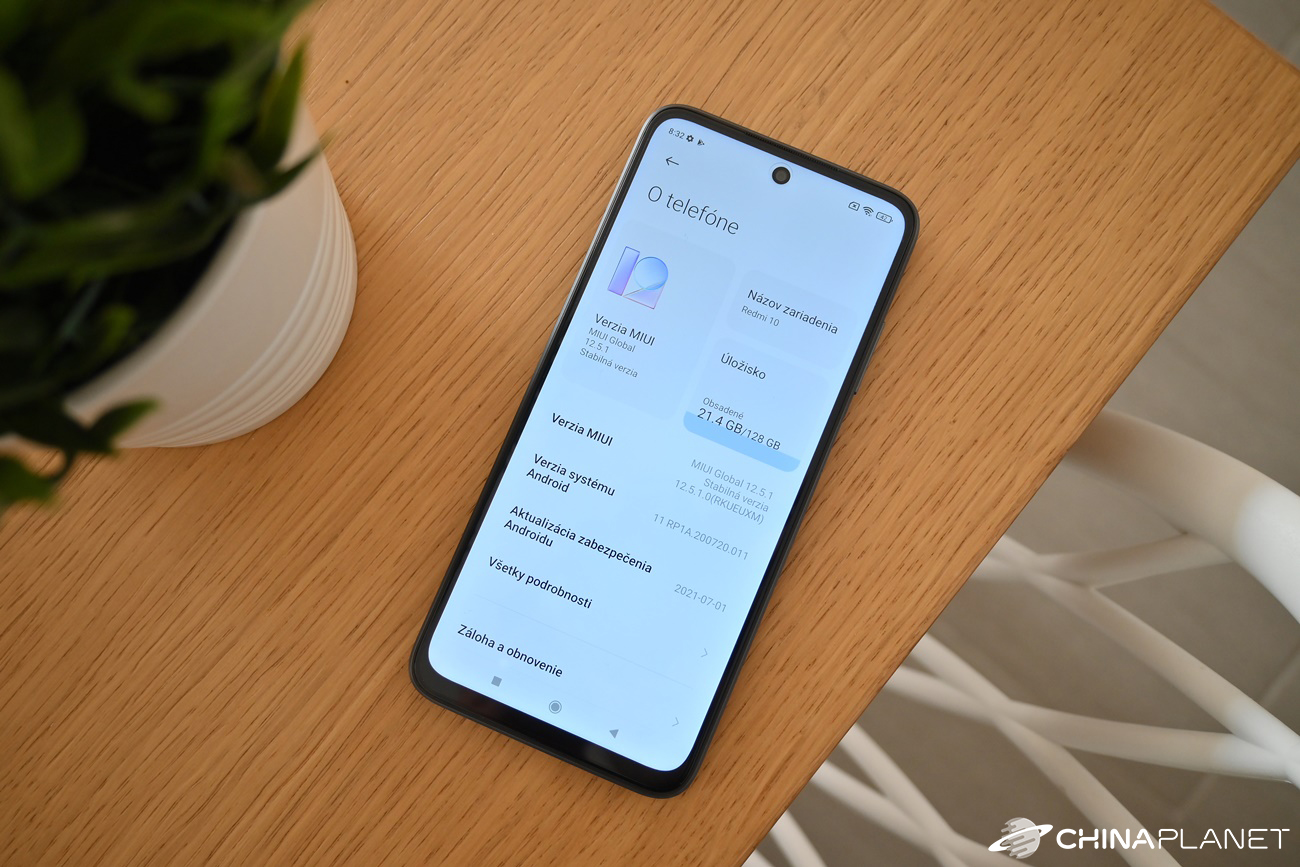 Our test piece had 4 GB of LPDDR4X RAM and 128 GB of storage. There is also a more powerful version with 6 GB RAM or a lower version with 4 GB RAM and 64 GB storage space.

We installed the popular benchmark AnTuTu on the smartphone, in which we achieved a score of only 217 points. For comparison, the POCO X873, which is sold at a very similar price, had a score of 3 in AnTuT.

Nevertheless, the smartphone system is smooth for its price category and we did not notice any jams at all. The truth is that applications open with a slight delay, which is common for this category of smartphones.

We are very pleased with the recent trend, as even cheaper smartphones already have stereo speakers, as well as the tested Redmi 10. The sound will pleasantly surprise you. The speakers are loud enough and play cleanly. The treble is particularly pronounced, but stronger bass is lacking. 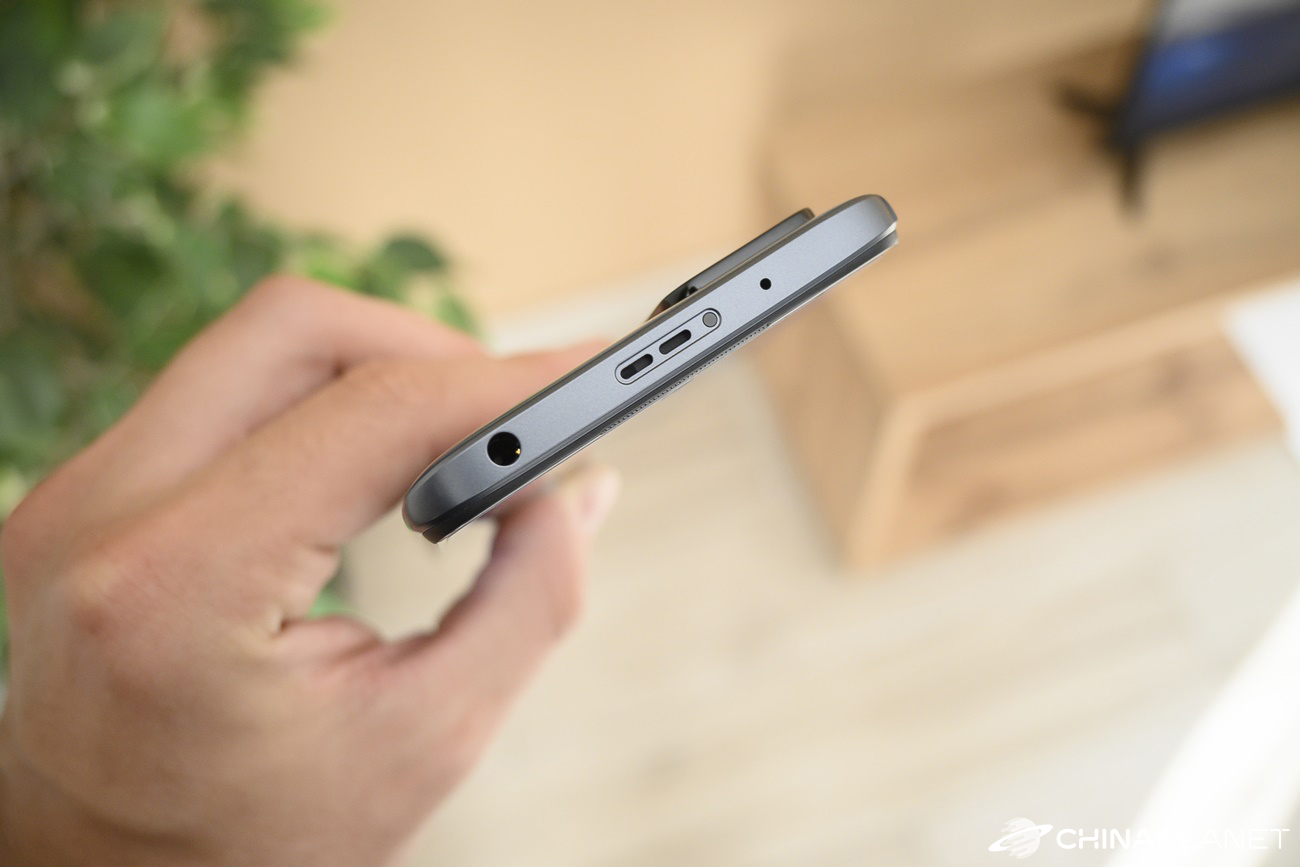 These speakers can easily compete with a significantly more expensive model.

The Redmi 10 has a really rich range of cameras in its category. The rear module contains up to four cameras: 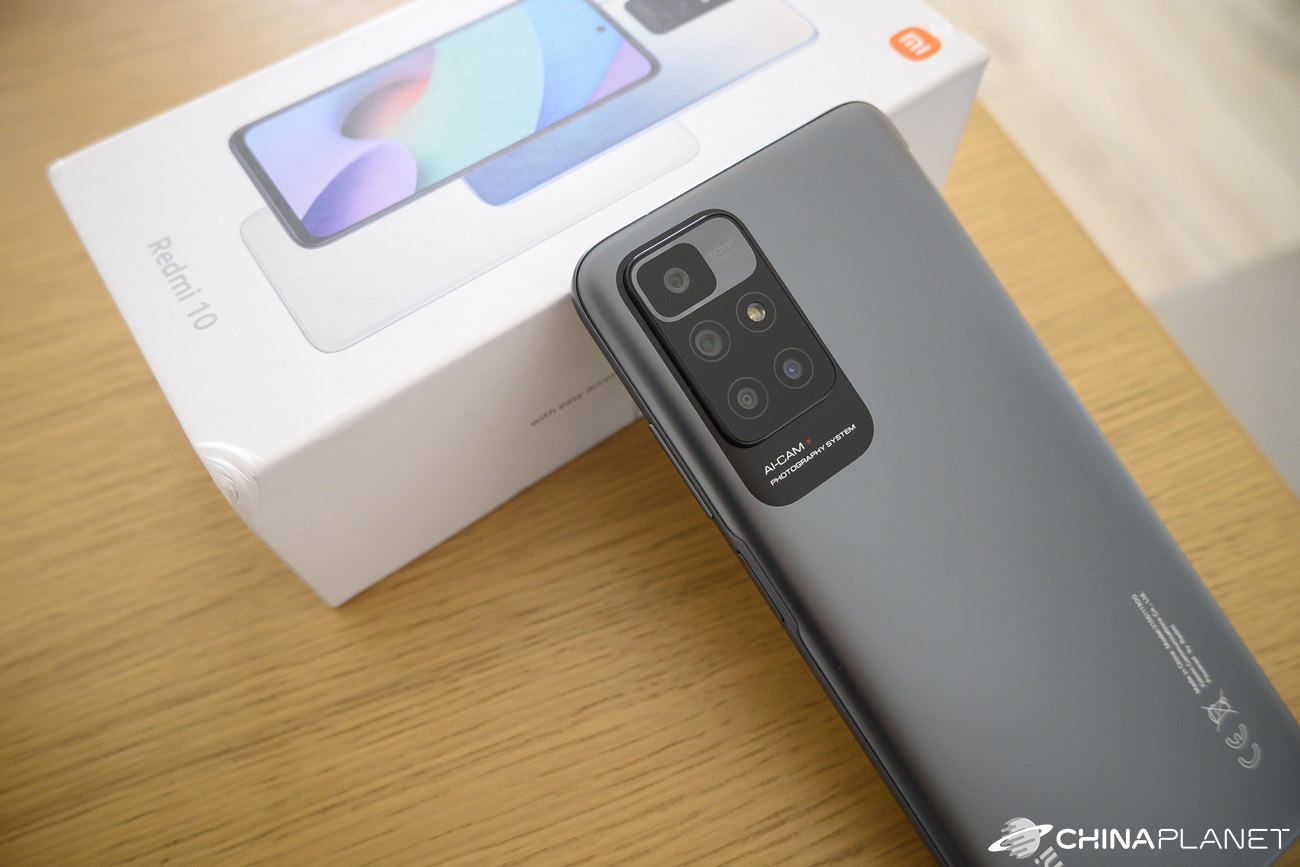 Apart from the main sensor, we don't have a high number of megapixels here, but the equipment is quite decent for the basic model. However, the photos from the main camera are only average, which was to be expected given the price. The colors in the photos are cooler, indistinct and the overall photo is nice, especially in ideal lighting conditions.

It is worse in low light, especially indoors. A number of underexposed spots appear here, and noise is visible in darker spots. The wide angle camera is weaker compared to the main camera. It has a weak dynamic range and can often see overexposed or underexposed areas, but on the other hand it has a more natural color rendering.

2x optical zoom is also available. These photos have slightly warmer colors and the quality is only very average. 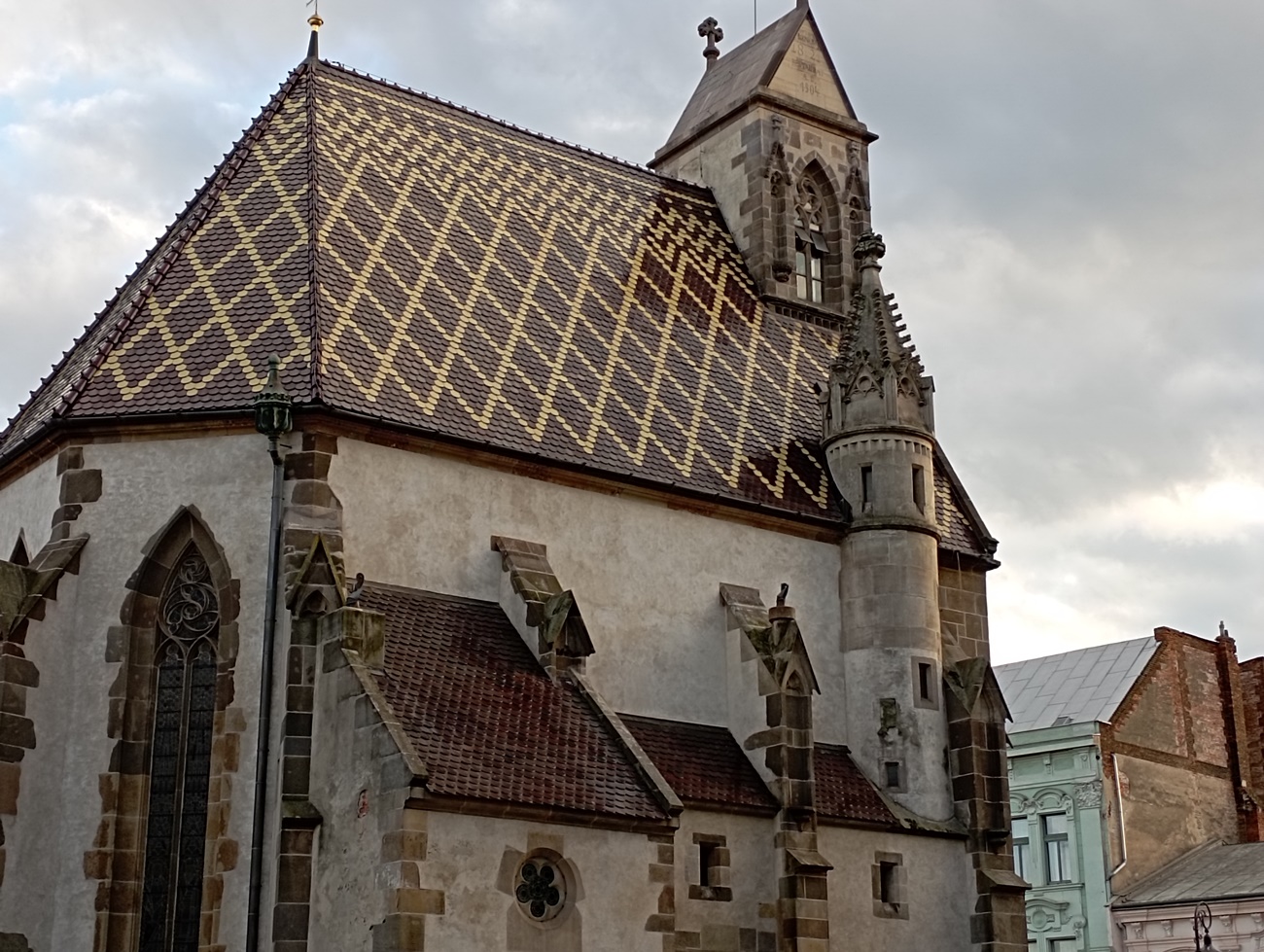 Macro photos are quite nice at first glance on the smartphone display, but they lack higher resolution and higher contrast with more saturated colors. The overall impression of these photos is not the best, especially if you open them on a larger monitor. 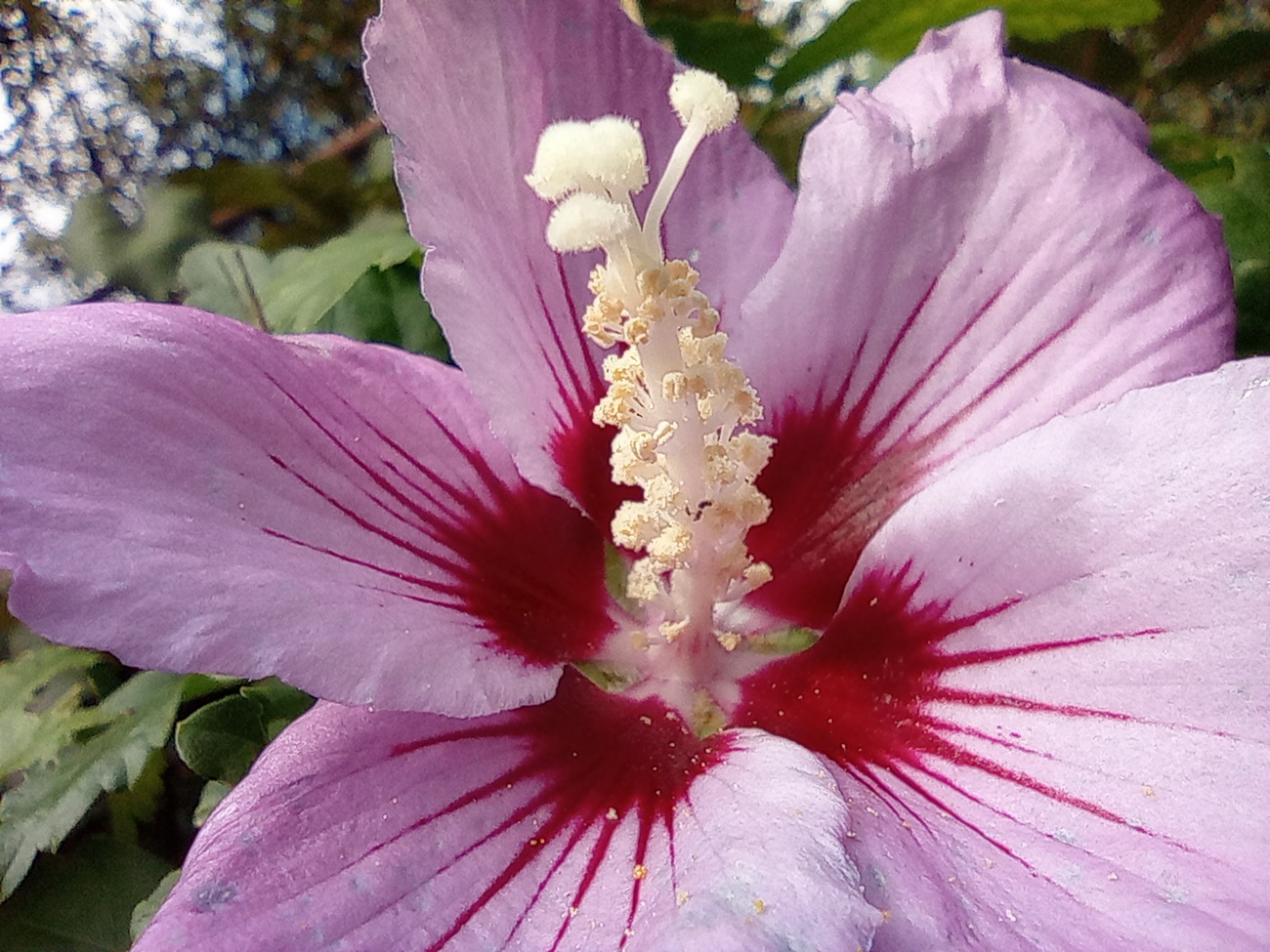 Night mode is also available. It can very well suppress strong glow from various banners and other lighting sources, but the photos are not very sharp. As an example, here are a few shots with and without night mode.

The selfie camera has 8 MPx with an aperture of f / 2.0. The output from it is also average, but it is quite sufficient for ordinary video calls. However, selfie photos are not very good.

In terms of connectivity, whether we're talking about wireless or wired connectivity, the equipment is really very rich. We will find here the damned 3.5 mm headphone jack by many manufacturers and also support for two SIM cards, at the same time with space for a MicroSD card. In many smartphones today we no longer find support for MicroSD cards, and if so, often at the expense of one SIM card. 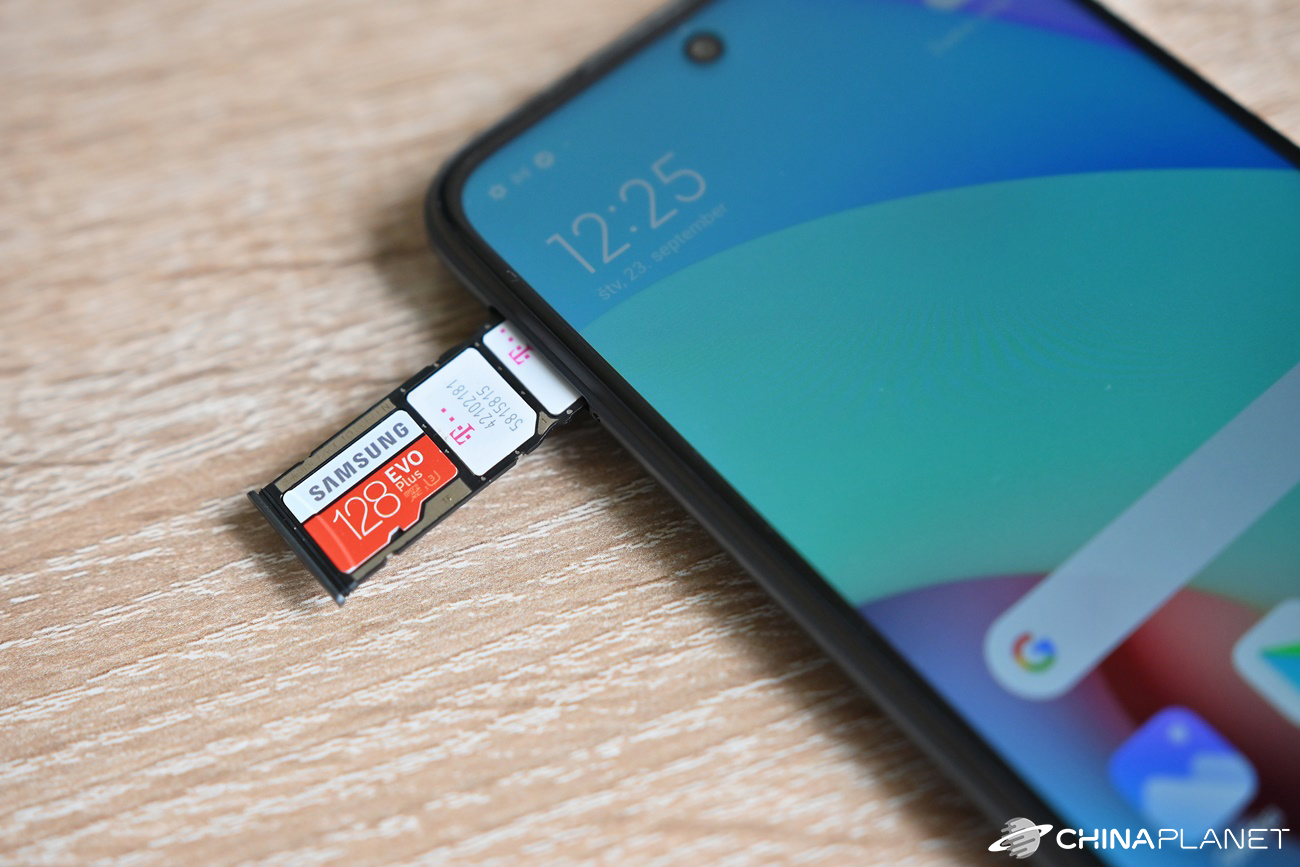 Redmi 10 will also be pleased with NFC support, so you can easily pay in stores with your smartphone.

We have 4 ways to unlock your smartphone:

The fingerprint reader is located on the right edge of the smartphone and is relatively accurate. In 99% of cases, we managed to unlock the smartphone with the fingerprint for the first time. A slight delay between placing your finger and unlocking is visible, but not uncommon.

Face unlocking works very well, but also with a delay. We also tried unlocking with a Bluetooth device, specifically we used an Amazfit GTR watch. All they need to unlock with the watch is within range of Bluetooth. The smartphone is then unlocked by simply turning on the screen and swiping your finger across the lock screen, which unlocks when the watch is close.

Redmi 10 promises long life thanks to a 5000 mAh battery and IPS display with adaptive refresh rate. The manufacturer states endurance at the level of 30 hours of talk time, 14 hours of video watching or 158 hours of listening to music. 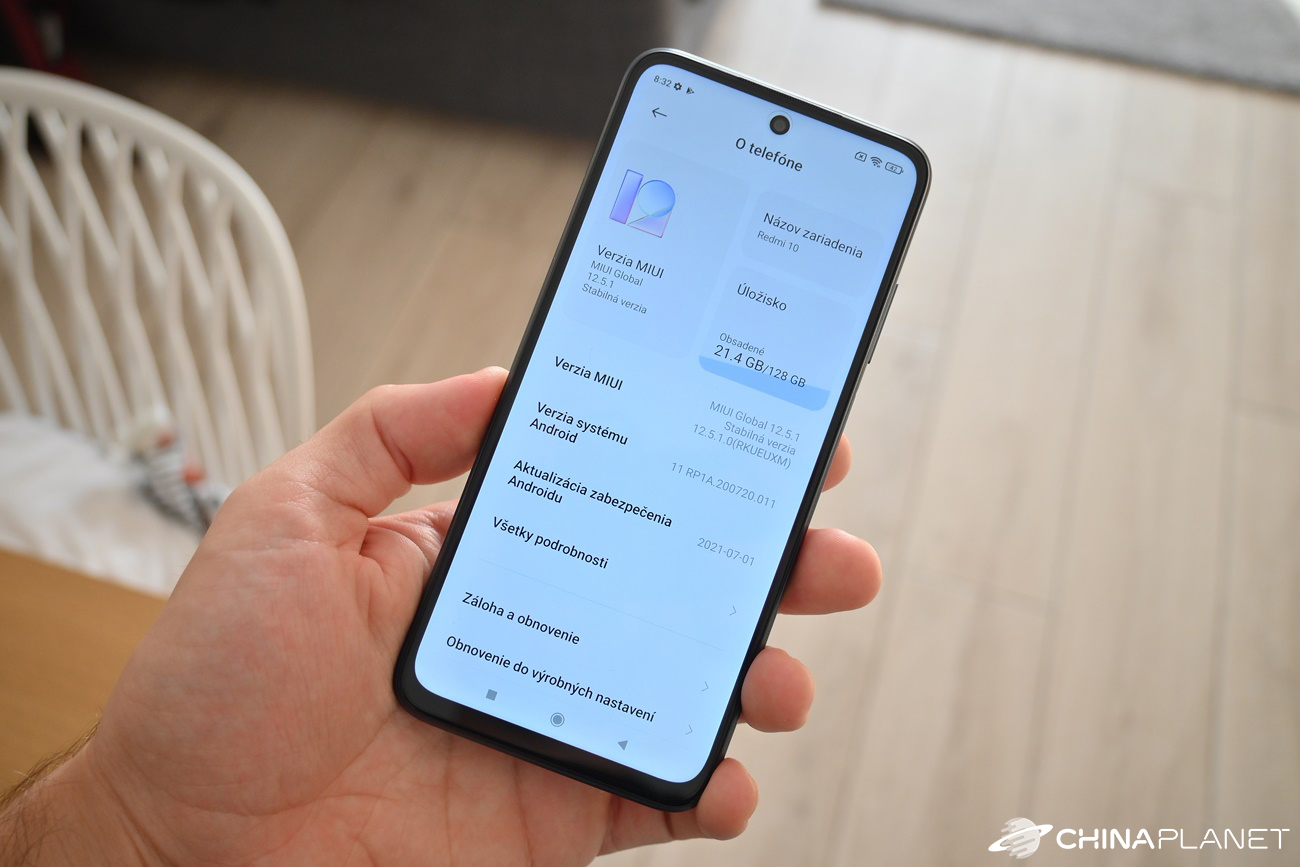 In reality, the endurance is really good and the percentage of batteries decreases slowly. The two-day endurance on a single charge is thus completely real. You definitely won't have to charge your smartphone every day.

As far as charging is concerned, we find here support for 18 W charging, which the manufacturer describes as fast, but for today's conditions it is certainly not fast. Of interest is the support of reverse 9 W cable charging. You can also use the smartphone as a power bank for another smartphone or any battery-powered device.

Even the cheapest smartphone has Android 11 with the MIUI extension in version 12.5.1. The environment is seamless, full of customization and animation options. As this is a global version, all Google services are pre-installed and there is no Slovak language. 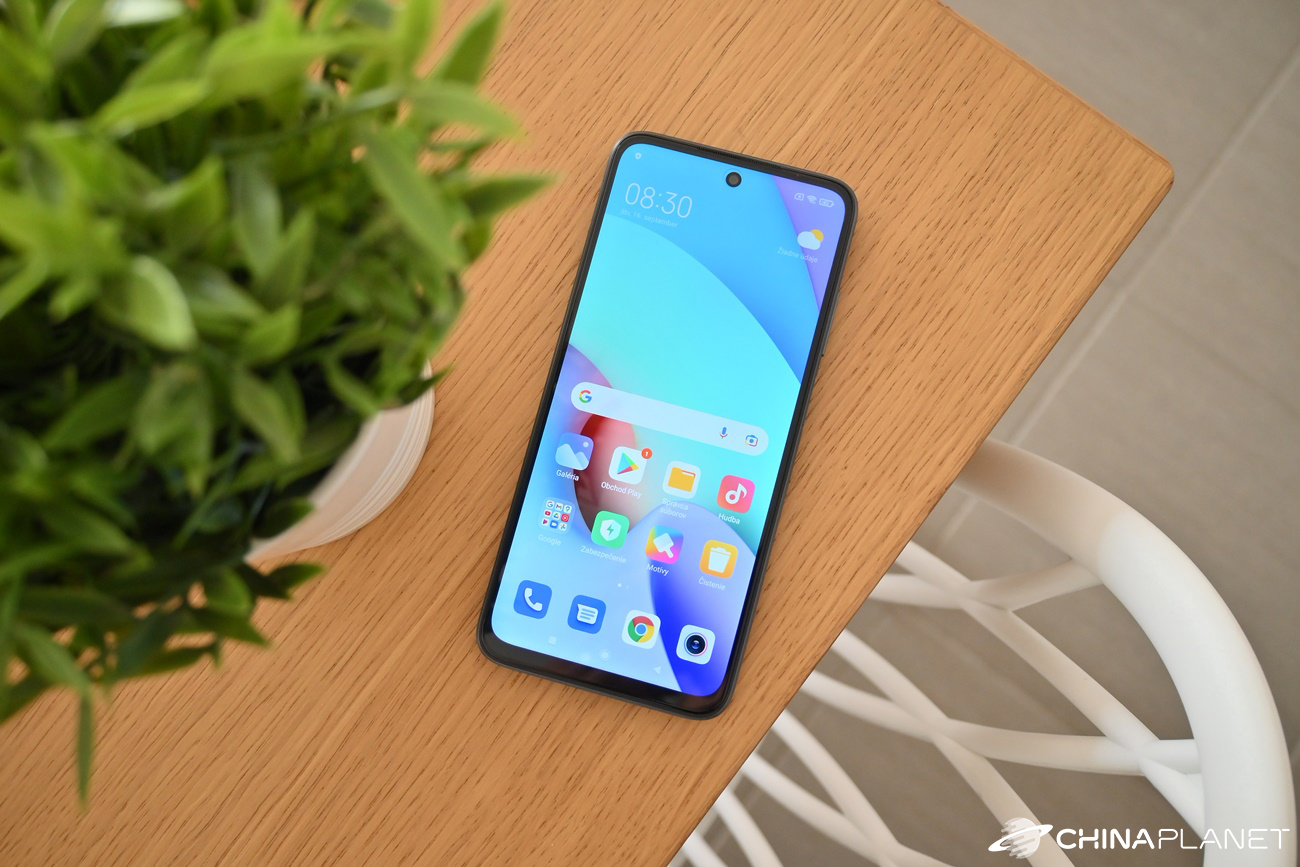 In addition to Google services, we also had 5 simple games pre-installed on the smartphone and a download link for PUBG Mobile. There is also a popular dark mode, reading mode and dual applications.

Redmi 10 is the cheapest model from the subsidiary brand Xiaomi. However, it offers rich connectivity and interesting parameters due to the low purchase price. It will please with a 5000 mAh battery, good endurance, NFC support or the presence of a 3.5 mm jack and a MicroSD card slot. 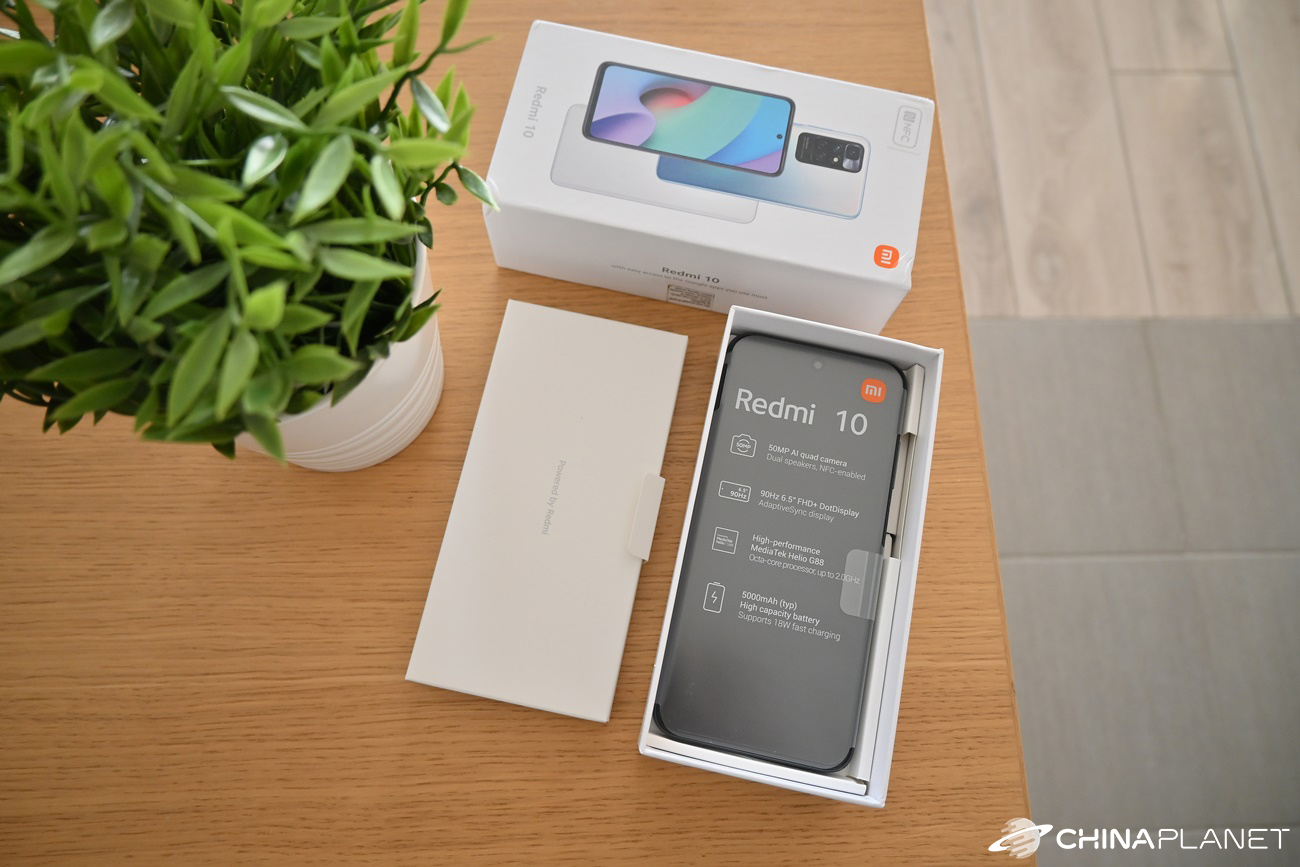 The smartphone has an IPS display with a high refresh rate of 90 Hz and the AdaptiveSync function, which can adjust the frequency to current needs. Four cameras with the main 50 MPx sensor will also please, although the output is rather average.

A smaller negative is the occasional slower reactions, which is natural for the base category model. The smartphone is designed for the undemanding user, who will be offered exactly what he is looking for - low price and rich equipment.

DrillPro is a brand of cheap DIY tools. They have wrenches, drills or grinders in EU warehouses

New coupon: Bezior S2 has a price like the Kugoo G-Booster, but higher performance. It attracts with a speed of 65 km / h, even with a robust body