[REVIEW] Xiaomi Smart Band 7 Pro is the bigger brother of the fitness bracelet with GPS, but without the expected function

wider 1.64" AMOLED display compared to the classic version of the Smart Band 7

more than 110 sports and pre-made training plans for running

built-in GNSS with support for positioning systems such as GPS

the ability to answer calls by text message

the expected NFC for contactless payments is missing

twice the price of the Xiaomi Smart Band 7

We have already tested the latest version of the popular Xiaomi Smart Band 7 bracelet, but this year we were impatiently waiting for an improved version with a larger display. Xiaomi Smart Band 7 Pro. It was supposed to bring built-in GPS and we were all looking forward to NFC as well. As you probably already know, the global show was a disappointment.

In our review, we will present all the features and functions of the new smart bracelet model, compare it with the classic version, and answer the question of whether it is worth buying.

At the time of writing the review, the Xiaomi Smart Band 7 Pro was available at the best price on the Gshopper portal, where it was around €70 with a coupon. Compared to the prices in Slovakia, which hover around €100, this is a fairly significant difference.

We had the Xiaomi Smart Band 7 Pro available even before the official global presentation, as it appeared on foreign e-shops earlier for unknown reasons. It came to us in a small black box of similar dimensions as in the case of the classic version of the bracelet. 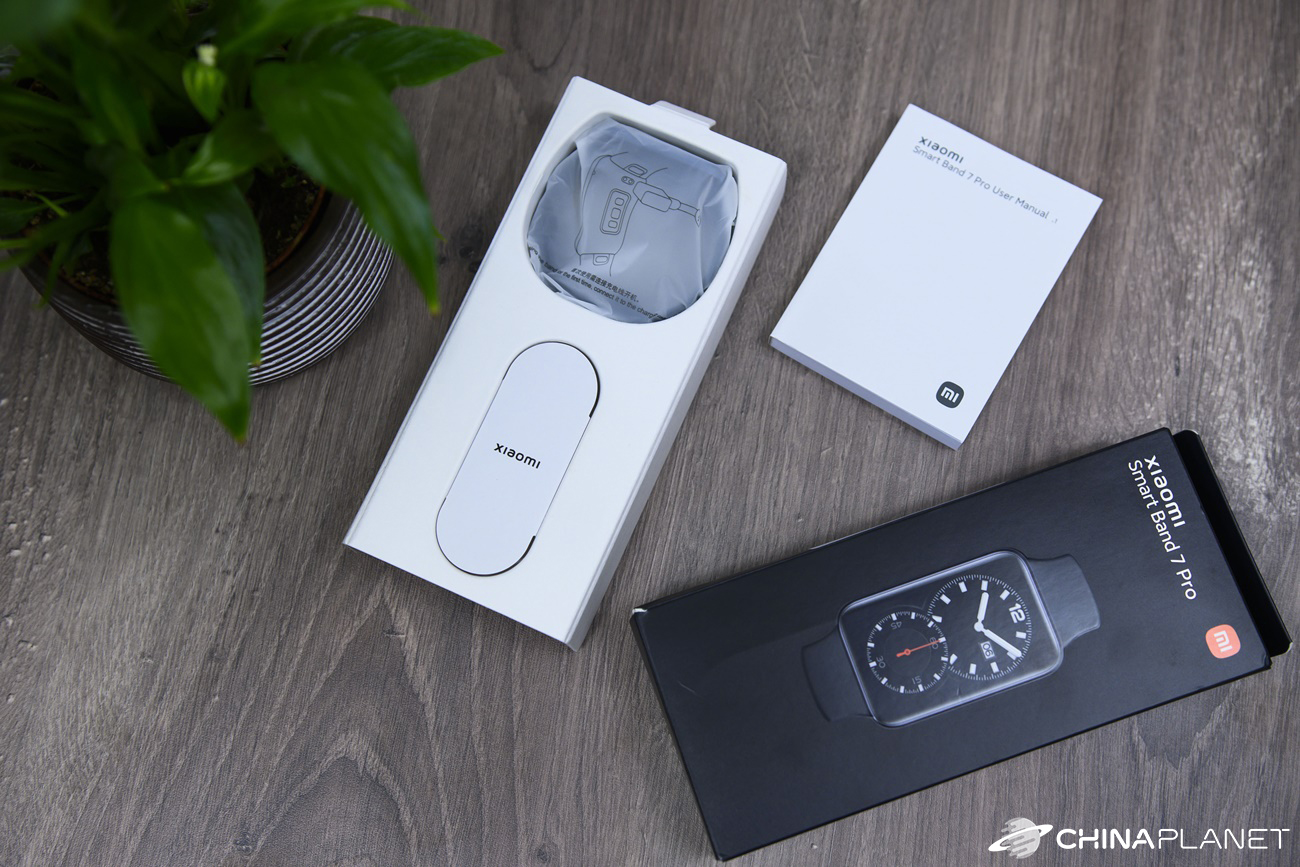 In the package we can find a bracelet together with a strap, a charging cable with a magnetic end and an instruction manual, which does not lack the Czech language. 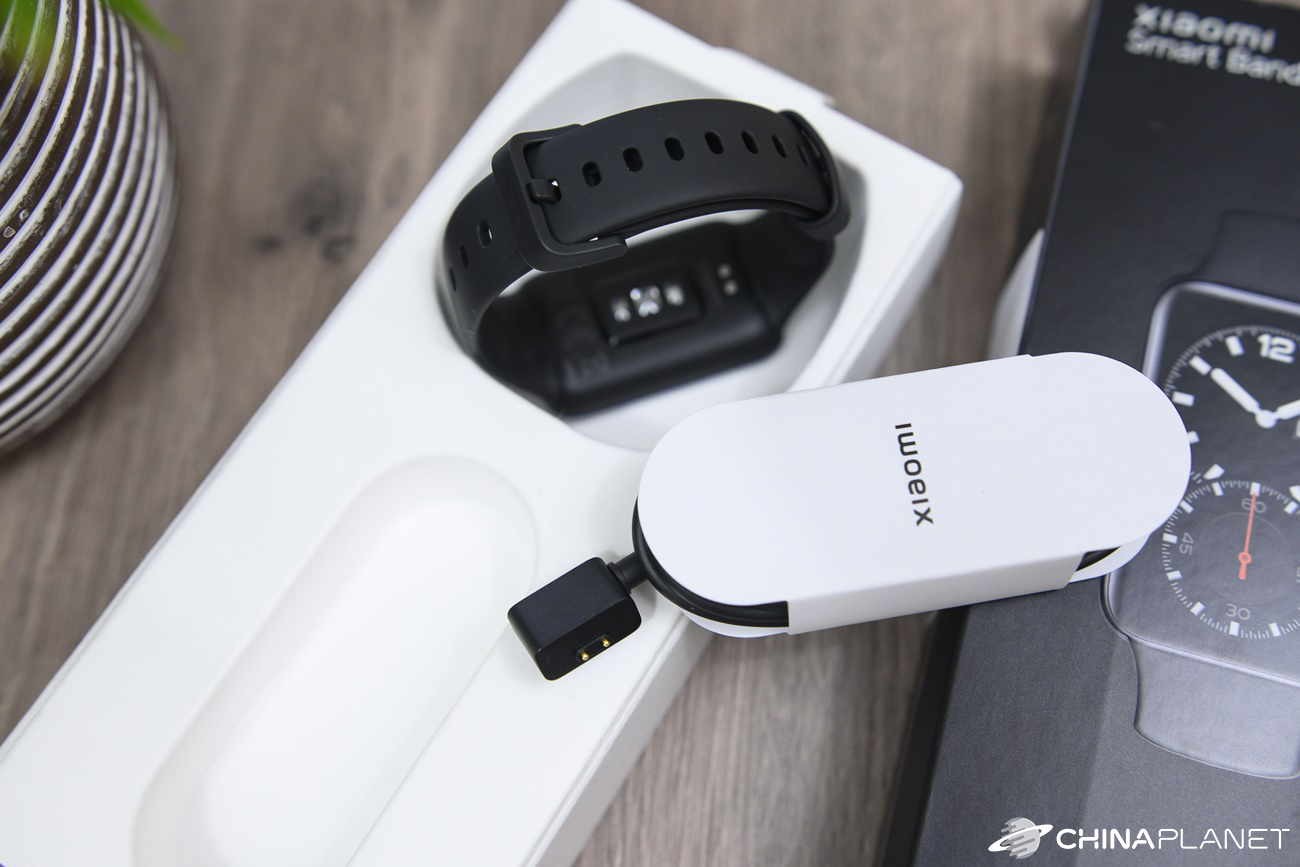 Design and quality of workmanship

Perhaps the biggest change compared to the classic version of the Xiaomi Smart Band 7, which everyone immediately notices, is the size of the body of the fitness bracelet itself. The diagonal of the display has not increased much, but in this case the display is significantly wider and visually larger. 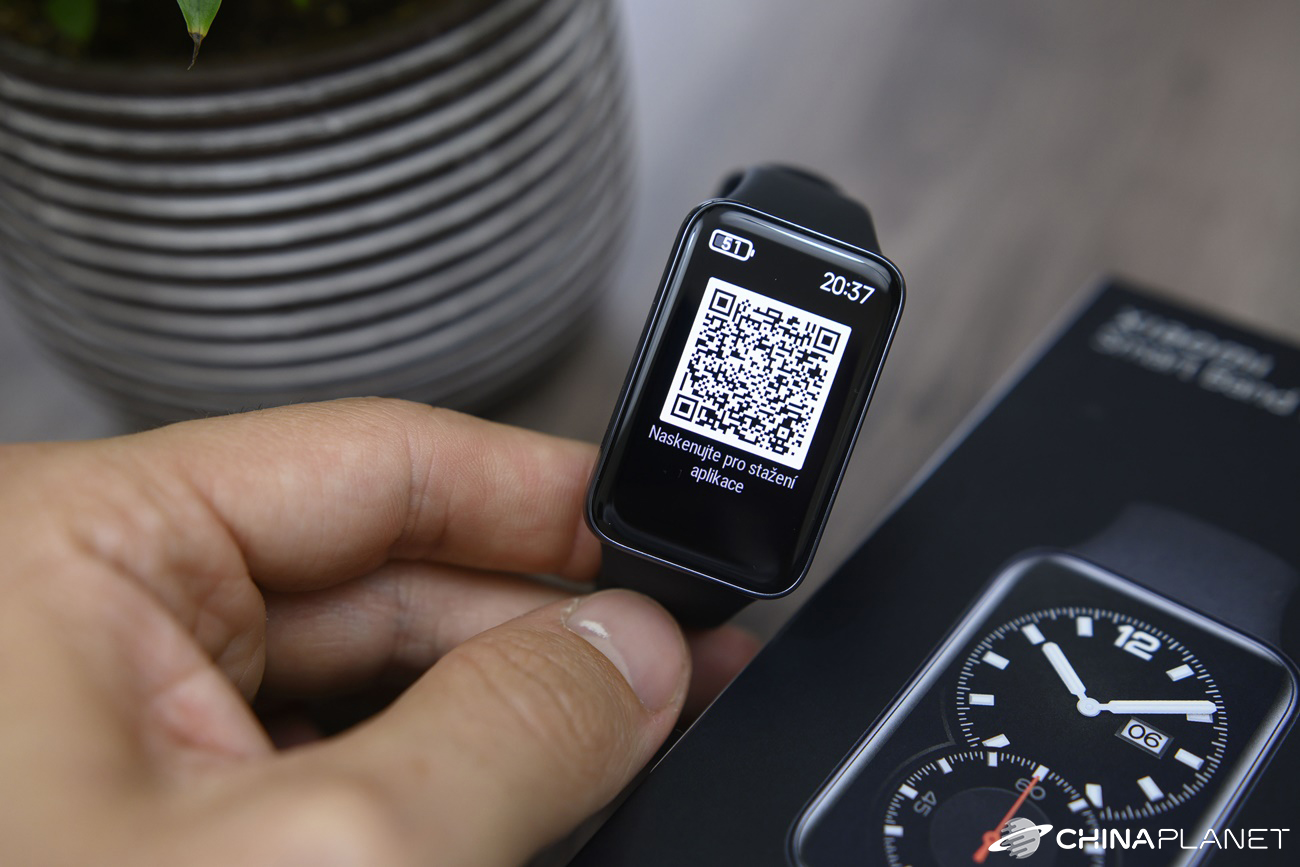 It's hard to say whether we should still consider the Xiaomi Smart Band 7 Pro a fitness bracelet or rather a smart watch. The novelty looks more like a Mi Watch Lite than a narrow bracelet. 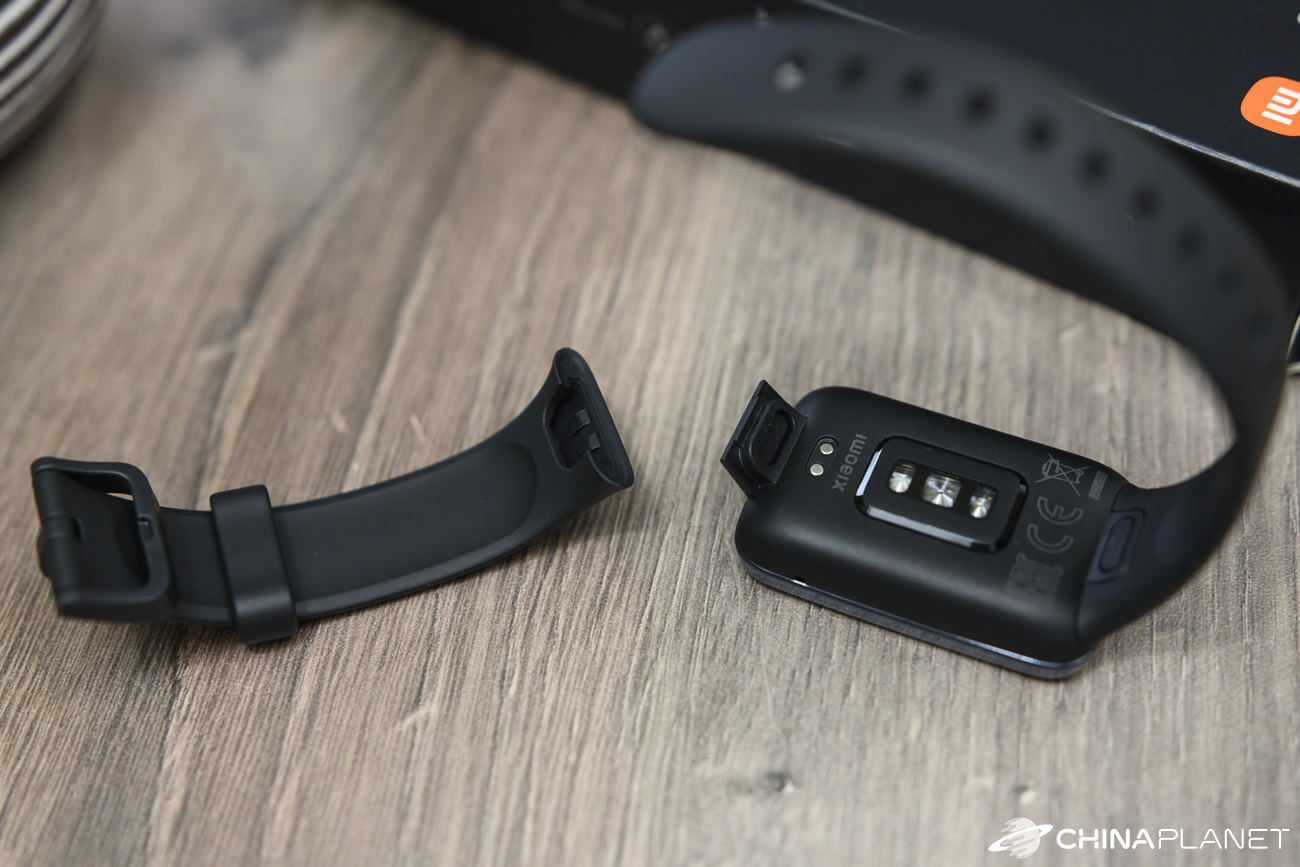 The principle of fastening the strap, which is identical to the above-mentioned watch, has also changed. It consists of two parts that are simply attached to the body of the watch.

The quality of processing remains at a high level. The watch is durable and has survived several impacts without any damage.

Pairing with the Mi Fitness app

The first step before using the novelty from Xiaomi is to pair it with a smartphone through the Mi Fitness application. After turning it on for the first time, only a QR code is displayed on the display, which is used to download the application. 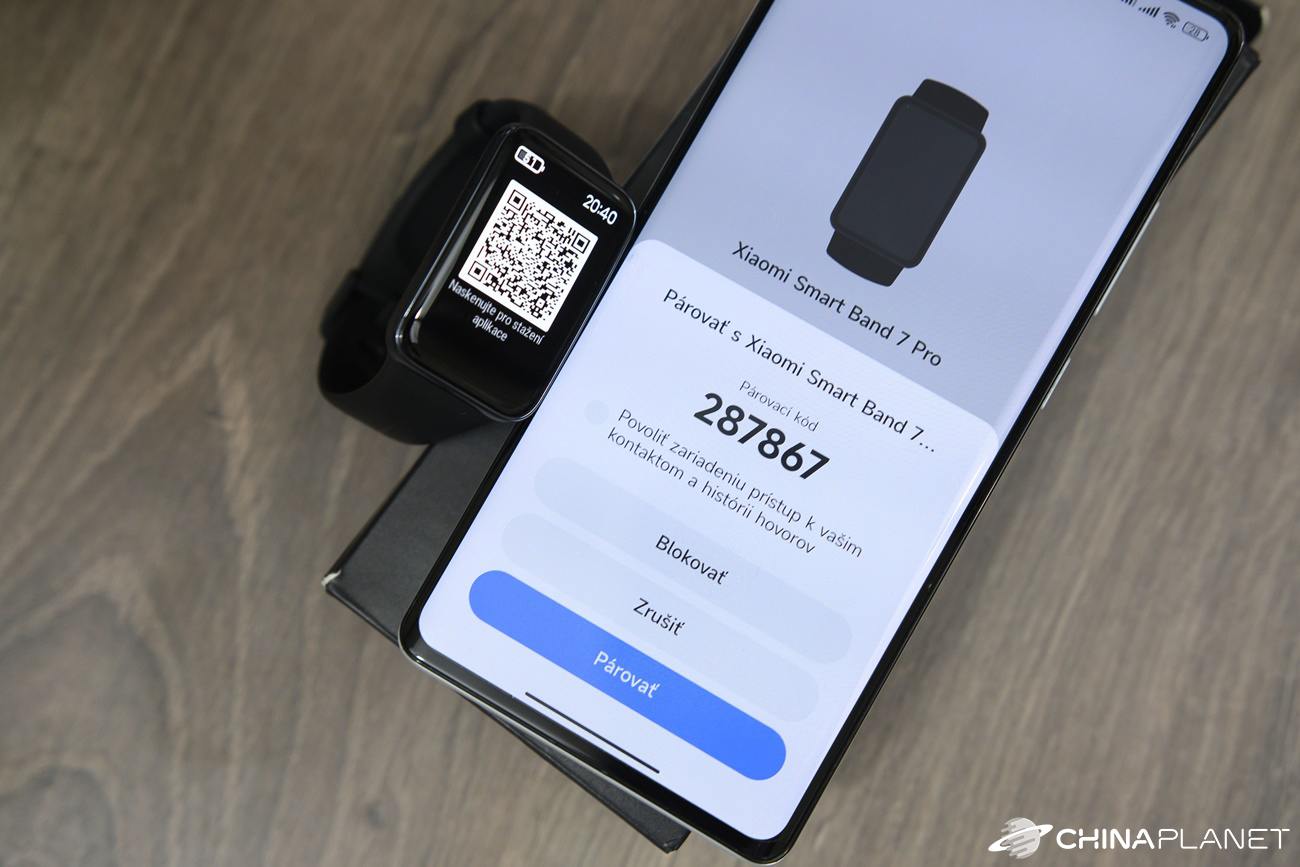 Pairing with the application itself is simple. Just choose to add a new device, where the smartphone automatically searched for a new bracelet nearby. After that, we just confirmed the pairing on the bracelet and smartphone display.

As in older versions of the bracelet, here too we find an AMOLED display. In this case, it has a diagonal of 1.64″ and a resolution of 280 x 456 px with a pixel density of 326 ppi. The display is gently rounded at the edges and offers the so-called screen-to-body ratio 70%. 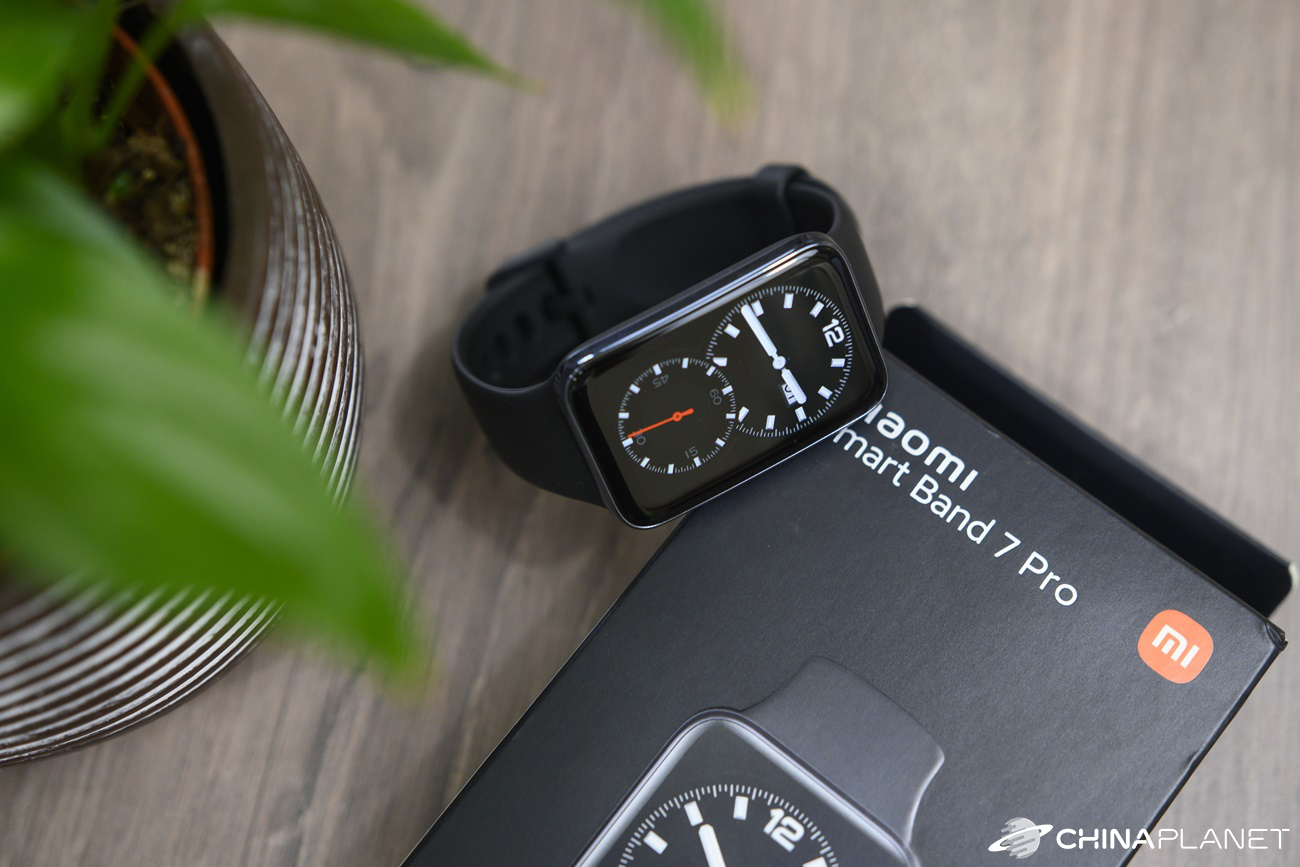 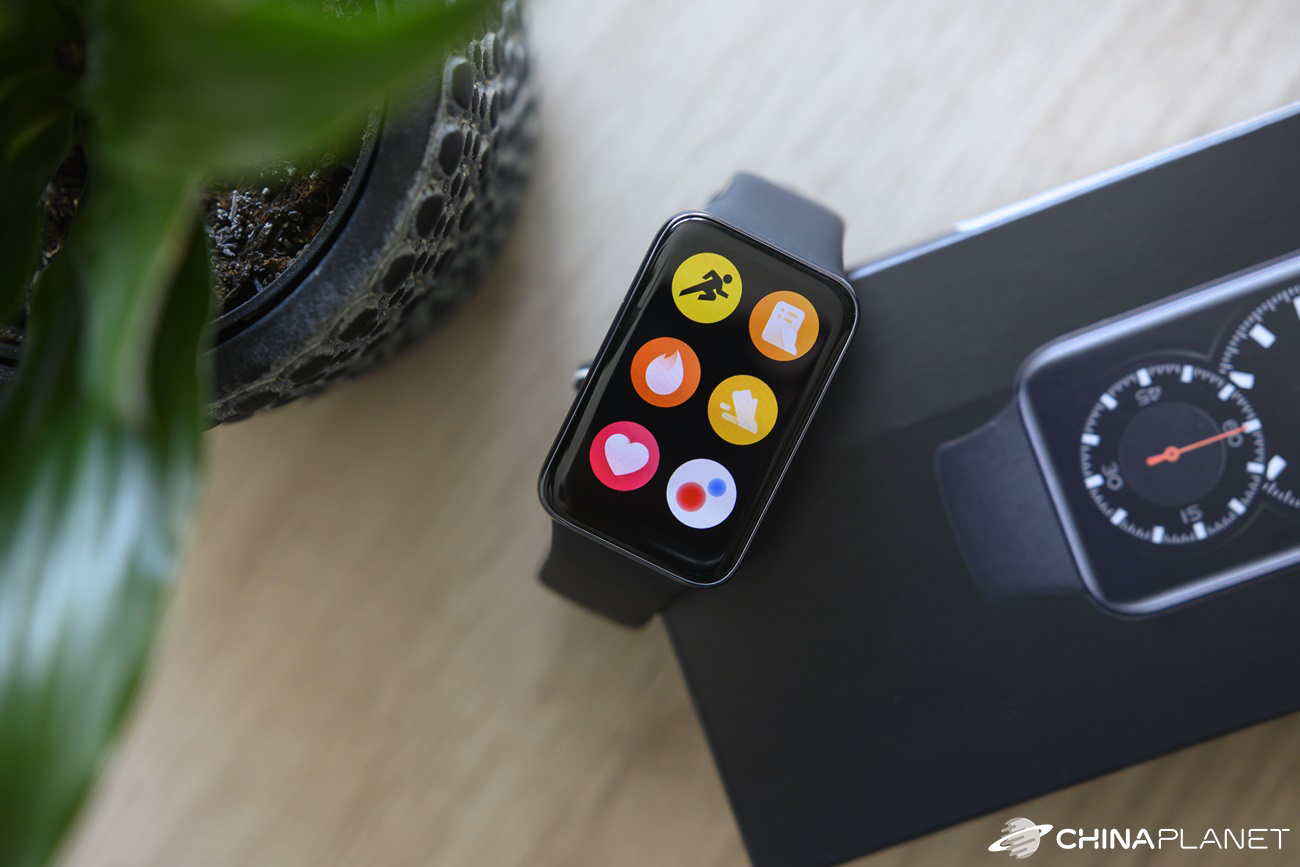 Since we have a larger display at our disposal, the display of items in the main menu is also adapted to it. Unlike the standard bracelet, where we have items arranged in a list that consists of one column, here we have two columns next to each other with no text description. 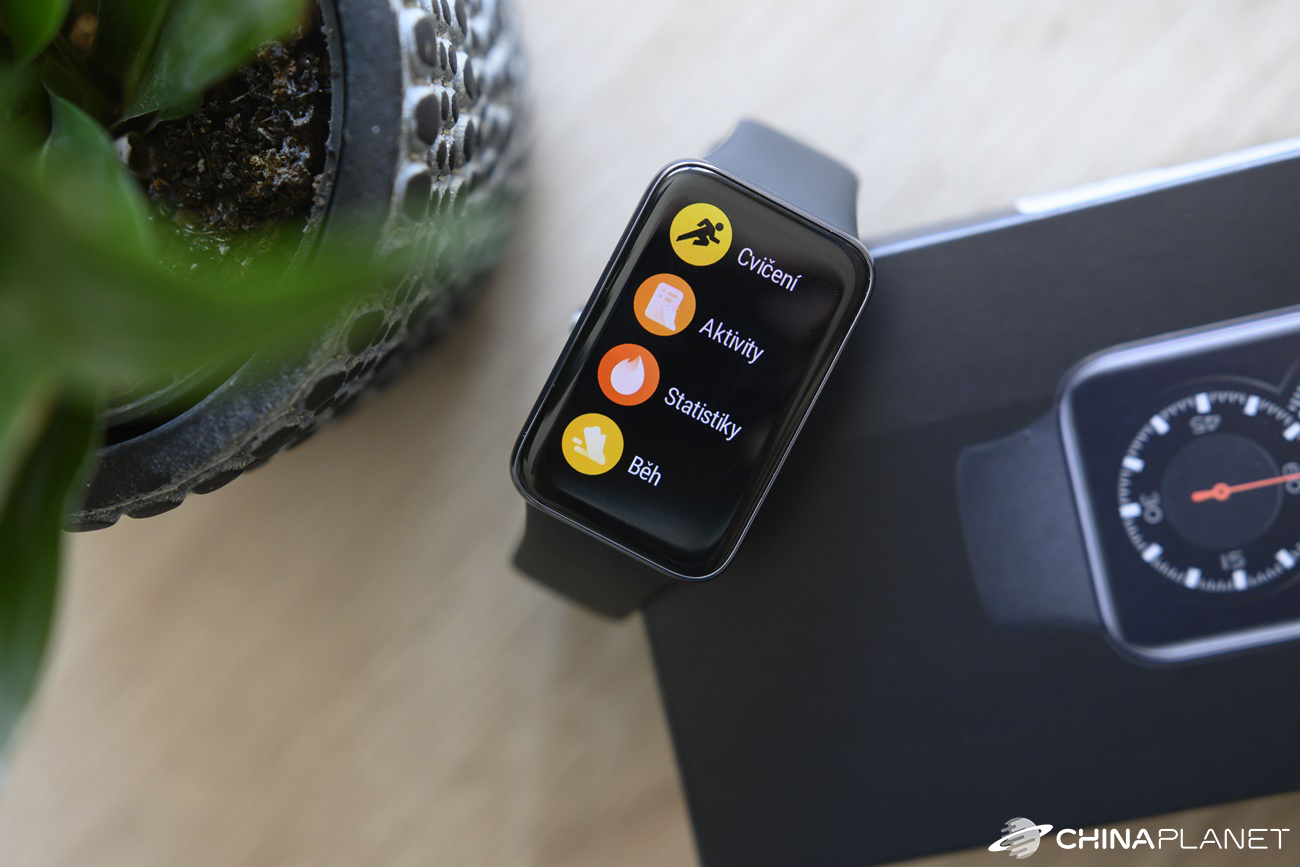 However, we can also switch the display to classic in one column along with a text description next to each icon. The disadvantage is a relatively long list, which is impractical if we often need to get to the end of it. The menu includes the following items:

There are also quick access screens that can be accessed by swiping to different sides. In this way, we have access to notifications, the control center or some functions such as weather, music or Alexa. 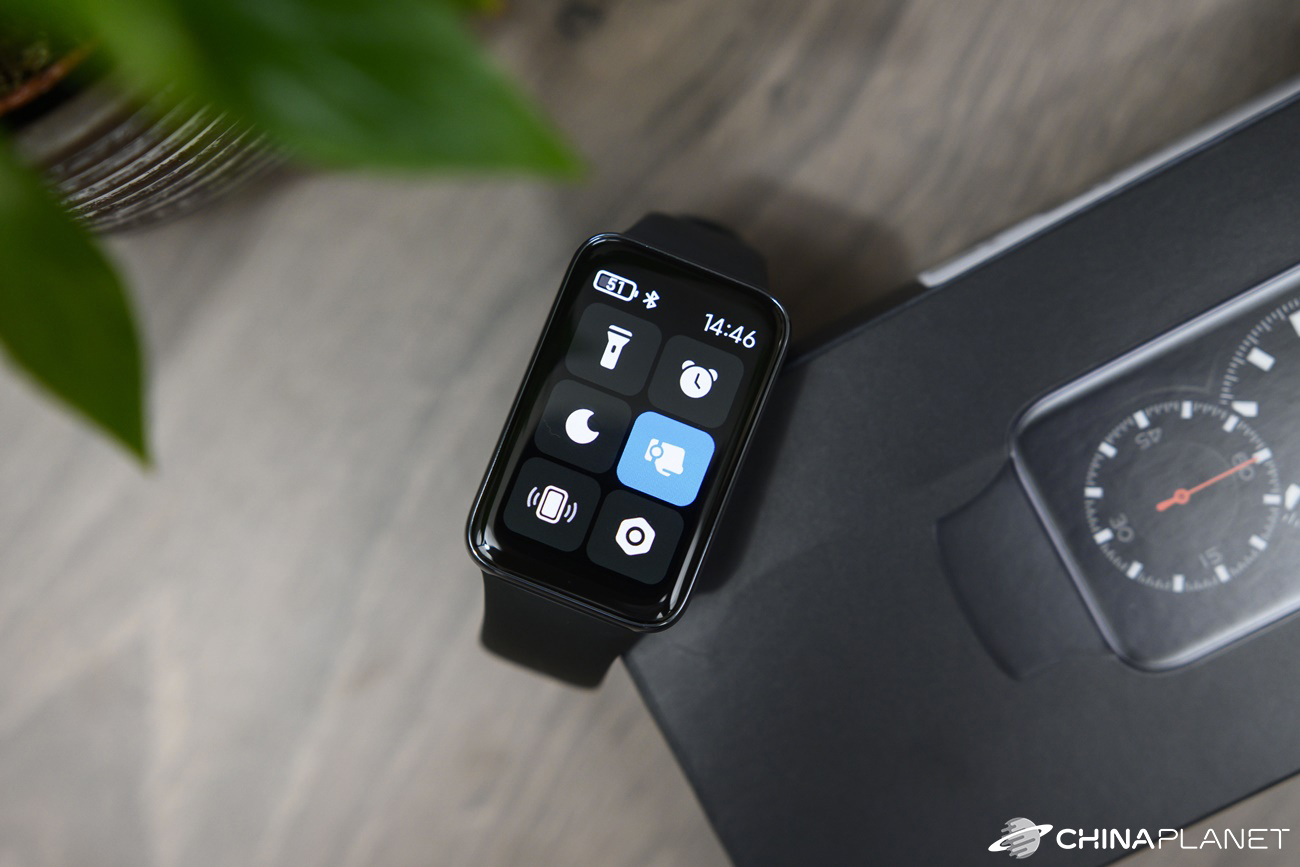 Heart rate monitoring and blood oxygenation functions already belong to the common equipment of fitness bracelets and watches. They are not missing in this case either, and we will not devote much space to them. But let's at least look at their accuracy. 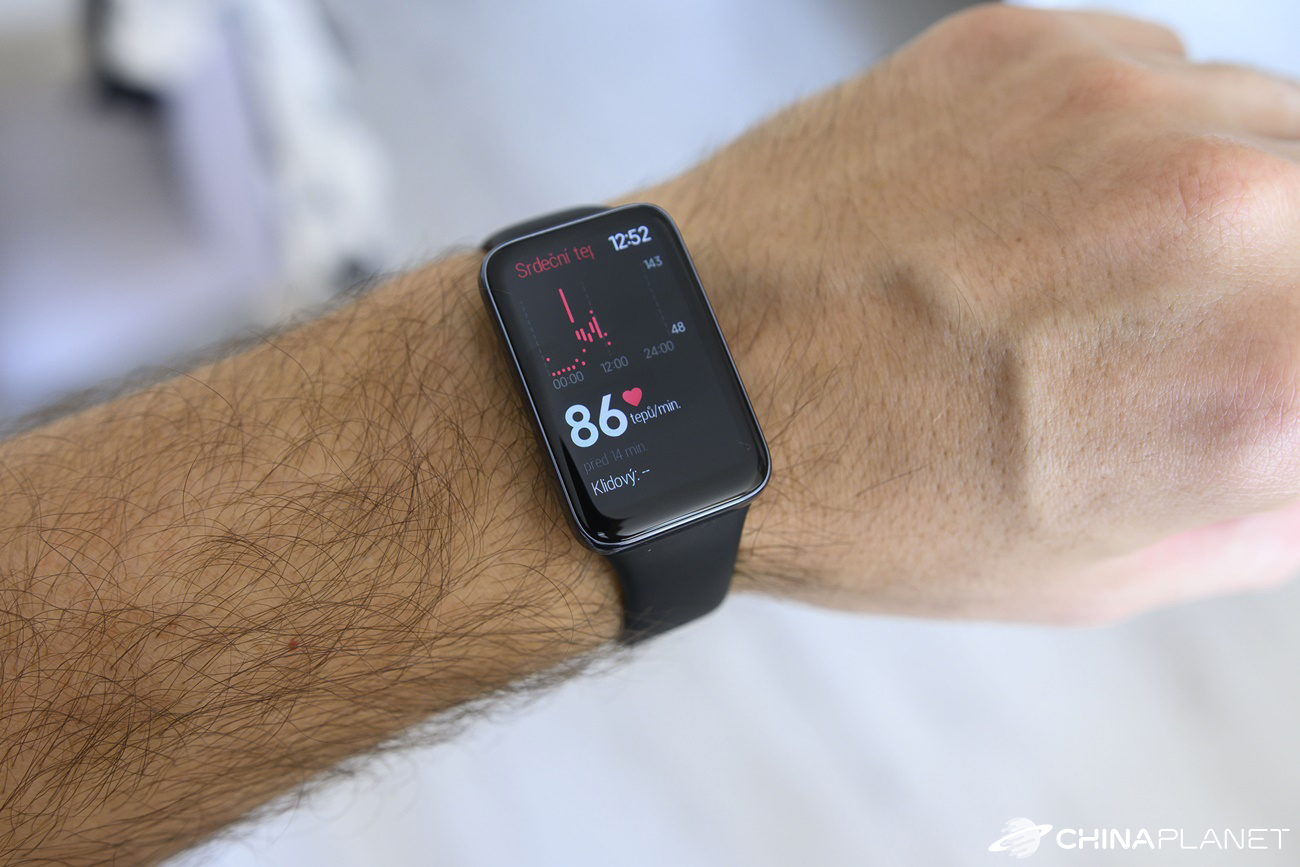 We compared the measured values ​​with an Omron sphygmomanometer and a finger pulse oximeter. The values ​​were very similar in most cases, they differed only by a few beats during the load. As for measuring SpO2, we see some very low readings here, especially during the night. These are values ​​around 78-80%, which are not realistic.

Another problem when measuring SpO2 is its duration and success. You personally at each SpO measurement2 we have to slightly press the bracelet to the hand for it to be successful. However, we have had this problem since version 6, when this feature first appeared in the popular bracelet.

We appreciate that, following the model of the latest version of the bracelet, quite a lot of data, including a graph, is displayed directly on the watch display. At the very end of each application, such as measuring heart rate or oxygenation, there is also a link to quickly go to the settings related to the given function.

Measuring the length and quality of sleep

The smart bracelet also measures the length and quality of sleep, although in the case of length it is still a rather imprecise measurement. The beginning of sleep is again the exact time when we lay down and not the time when we actually fell asleep. It is the same with the end of sleep. It's also about the time we got out of bed, not the time we woke up. 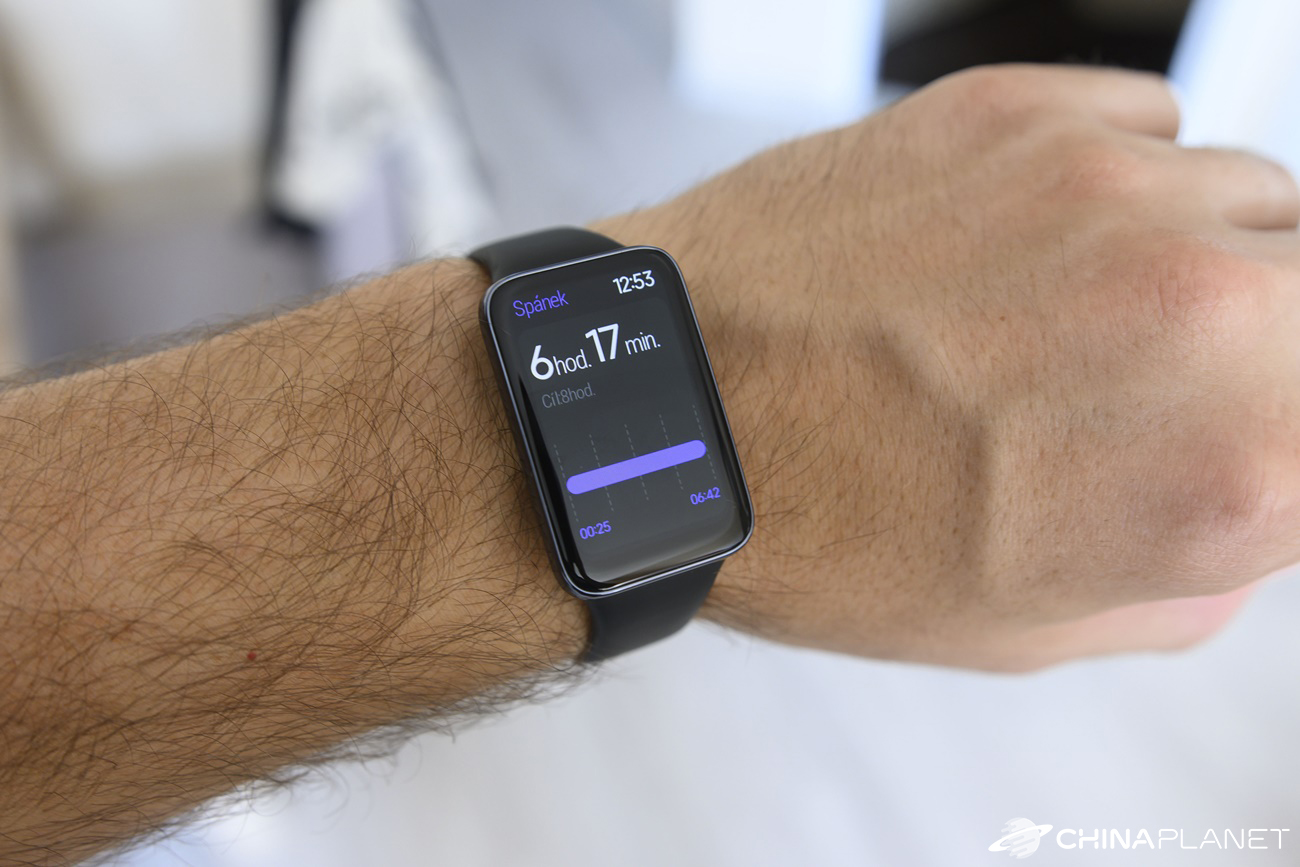 The watch's display shows total sleep duration with the times we went to sleep and woke up, along with average heart rate and oxygenation. At the end, we find a link to the settings where we can turn on advanced monitoring and breathing scores.

Individual phases of sleep such as REM, deep and light sleep are displayed only in the application together with graphs where we can see specific heart rate and SpO measurements2, as well as the individual stages of sleep.

The built-in GNSS system with support for GPS, GLONASS, BeiDou, Galileo and QZSS positioning systems will especially please the novelty. The bracelet will thus determine its location even without a smartphone. 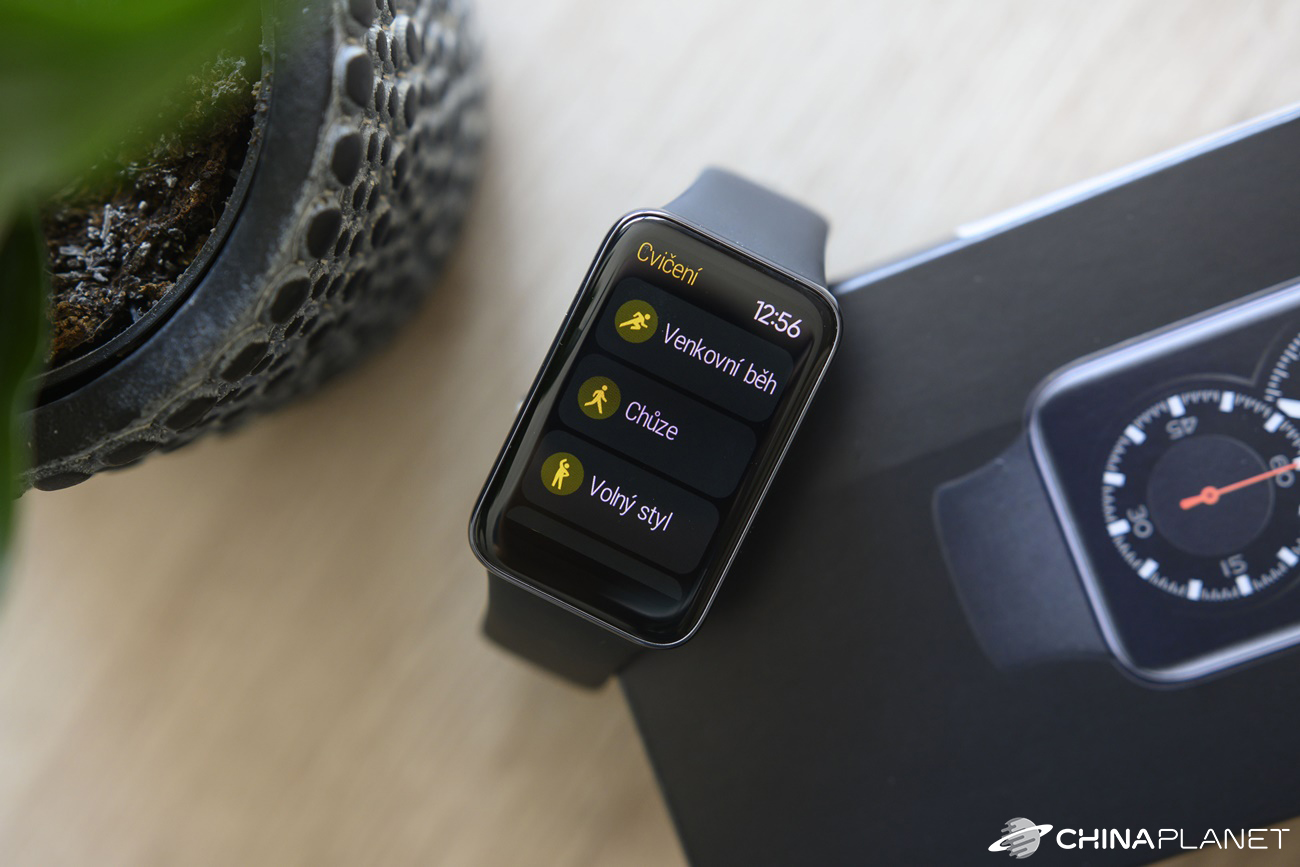 There are more than 110 different sports that the bracelet can record, while measuring individual vital functions and parameters such as the distance traveled or the number of steps. 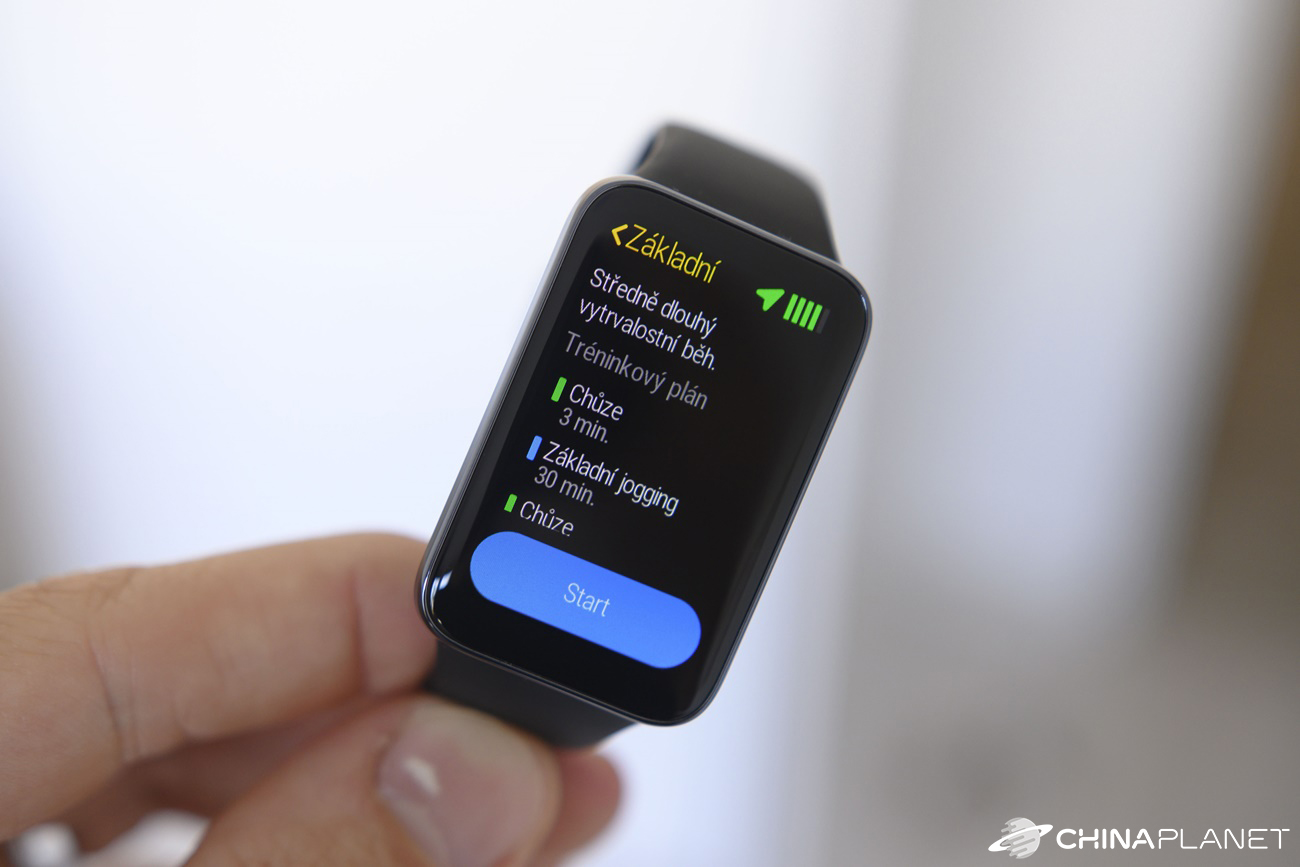 New are ten default running workouts, which you can find in the main menu under the item Running. These are trainings consisting of different lengths of walking, running or sprinting and their combination. They are divided into categories: beginner, fat burning, endurance and interval. For a better idea, in the basic training we find a training plan that consists of two-minute walking parts and three-minute running intervals. 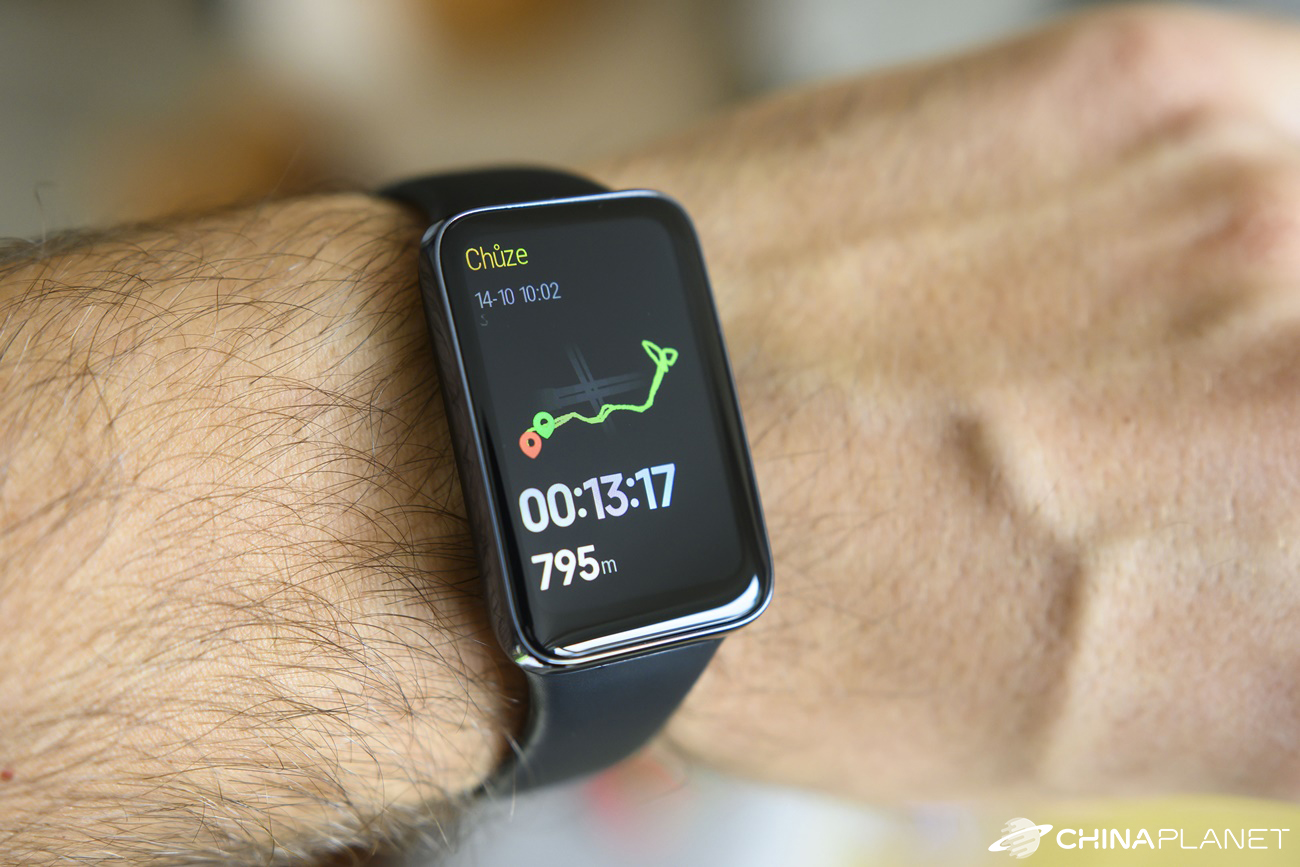 Since the bracelet has a GPS function, the position is first determined before each training session. Localization is problem-free and takes only a few seconds outdoors. After the end of the training, the route, the duration of the training along with other data based on the type of activity will be displayed.

NFC is missing in the global version

After unpacking and initially testing the bracelet, we were disappointed that NFC is not included in this new product. So you won't pay for this bracelet in stores.

Despite the fact that the bracelet is completely new, in addition to the default five watch face designs, we have more than 150 designs available in the app. 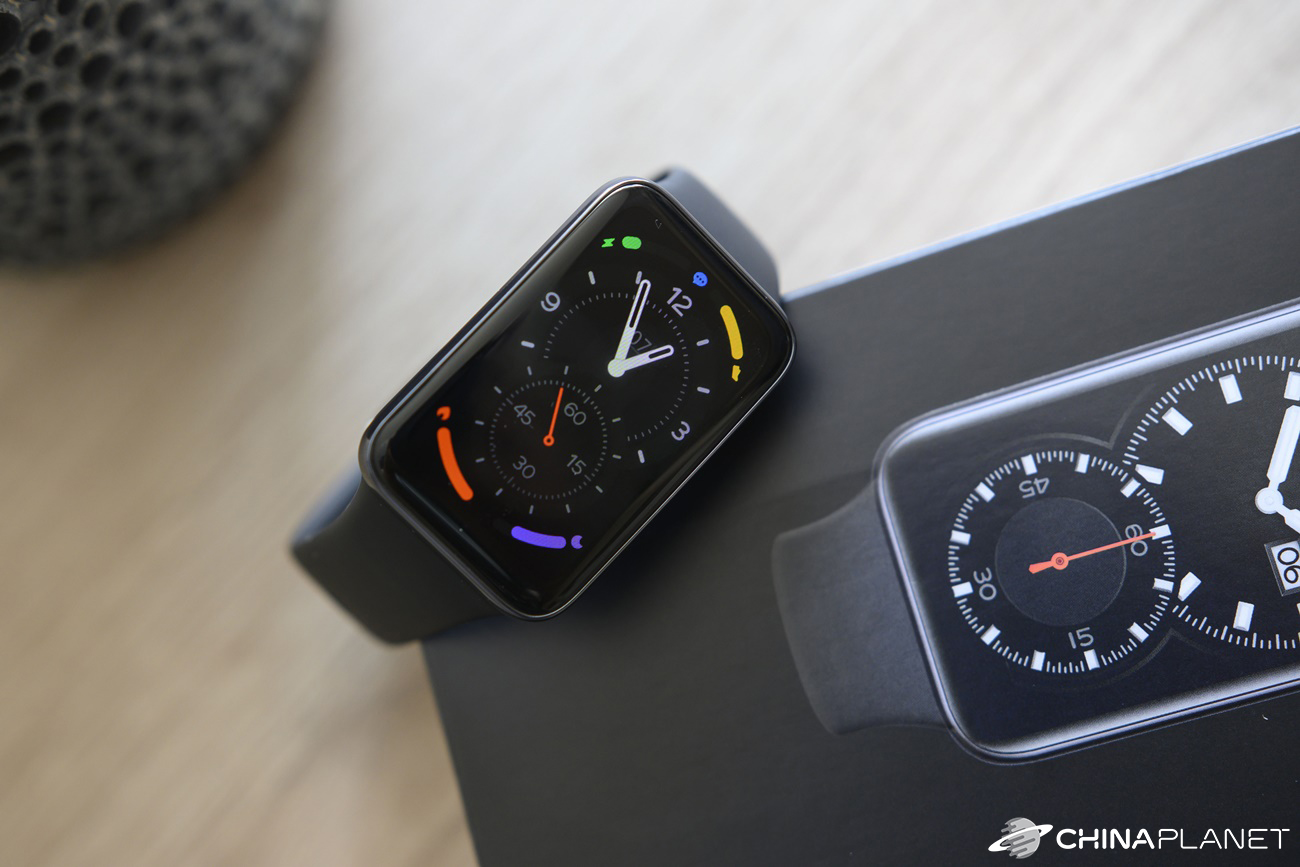 For each design, the application also shows how the active display will look with a specific watch face. There is also the possibility of creating your own designs using photos that you simply upload to the application.

It goes without saying that notifications from various applications are displayed directly on the display, including diacritics and smileys. In the case of smileys, only some are displayed correctly. Namiwe will only see a square for unsupported smileys. 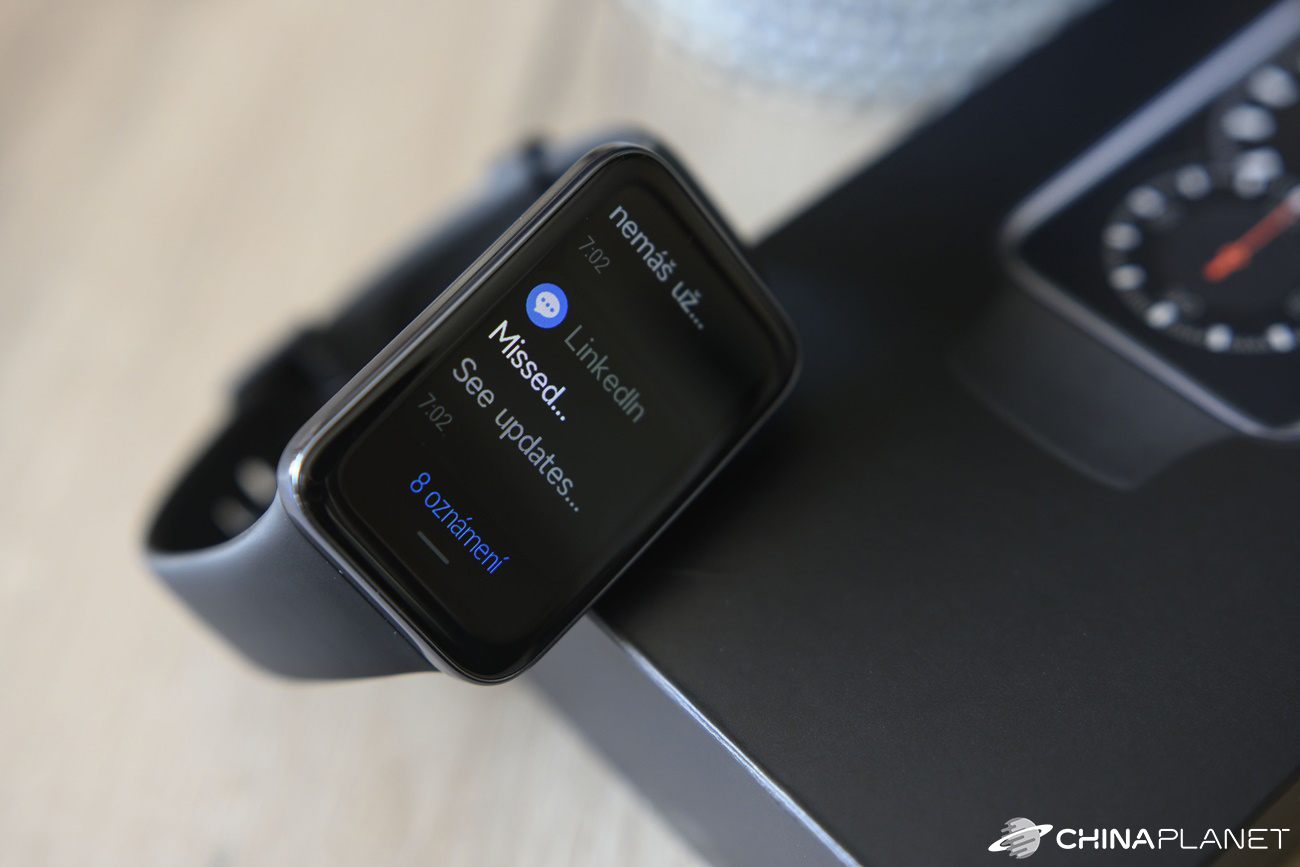 We can only reject or mute the call using the watch. At least the possibility of sending a short reply in the form of a text message will please. We can customize the answers in the Mi Fitness application. During an incoming call, the name of the caller is also displayed with diacritics.

Regarding the reliability of the display of notifications, here we have to admit that sometimes notifications are shown to us with a considerable delay. Especially if we are chatting with someone, we receive replies in the form of notifications late, when we have already replied to the message a long time ago.

The bracelet is equipped with a 235 mAh battery, which should be enough for about 12 days of use on a single charge. We really used the bracelet to the fullest. We had notifications turned on from almost all apps, automatic brightness adjustment, wake-up by raising the wrist, and constant heart rate and SpO measurement2. 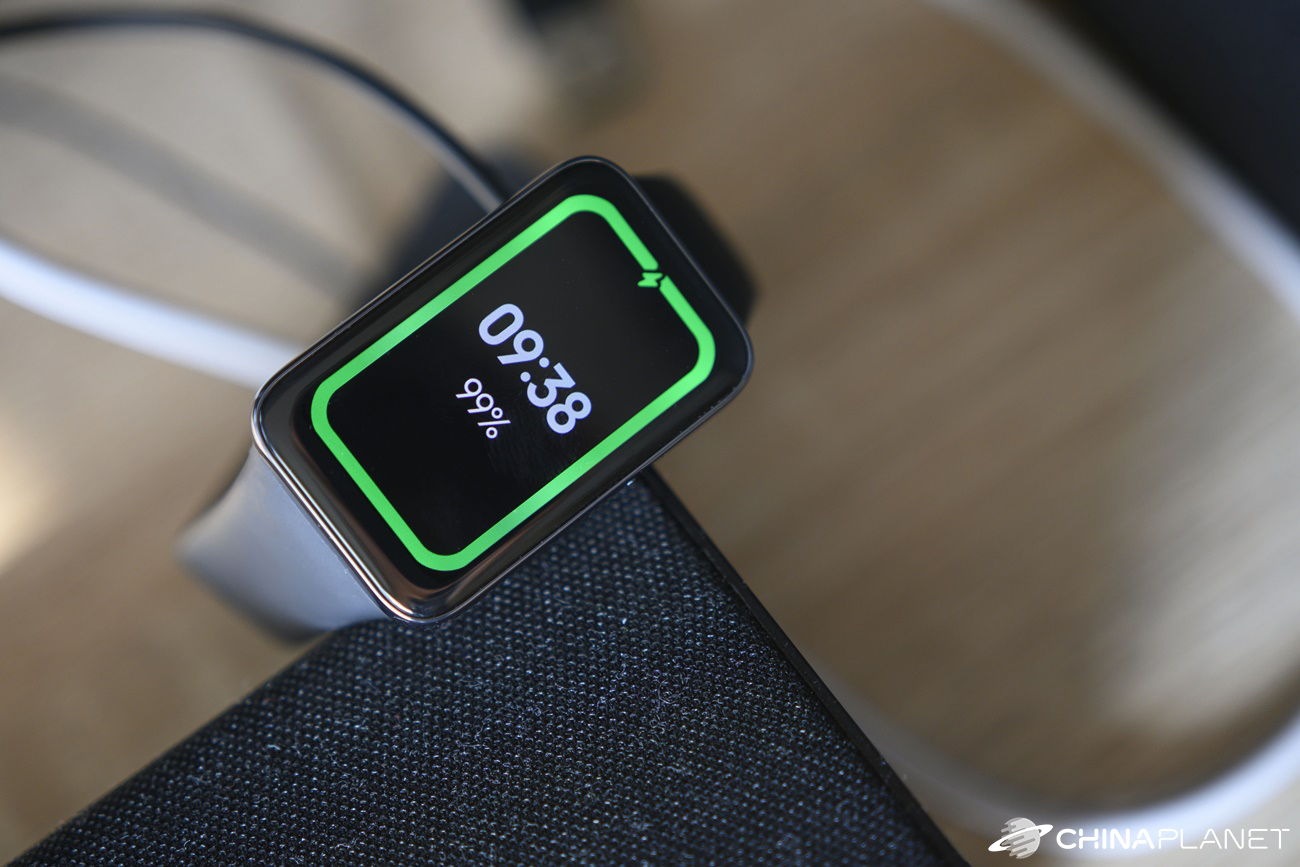 Without using GPS, i.e. without tracking sports activities, we got a maximum of 6 days, while on the last day we only had 12% of the battery capacity left. As you probably already guessed, GPS is a big battery eater, something to be reckoned with. The endurance will thus be shortened by a few more days, especially depending on how often you use GPS.

Charging takes about an hour via a cable with a magnetic connector, which you have to connect to your own adapter.

On the initial screen, it shows the main functions with measured values, and after clicking on them, we get to more detailed and historical data. These are displayed in clear charts.

The settings are also clear, and in addition to setting the design of the watch face, we also find settings for notifications, calls, quick replies, as well as other settings for individual functions that can also be found in the watch.

Xiaomi Smart Band 7 Pro is a new version of the popular fitness bracelet, which this time comes with a significantly larger and especially wider AMOLED display with a diagonal of 1.64″, which makes it more like a classic smart watch with an angular shape. 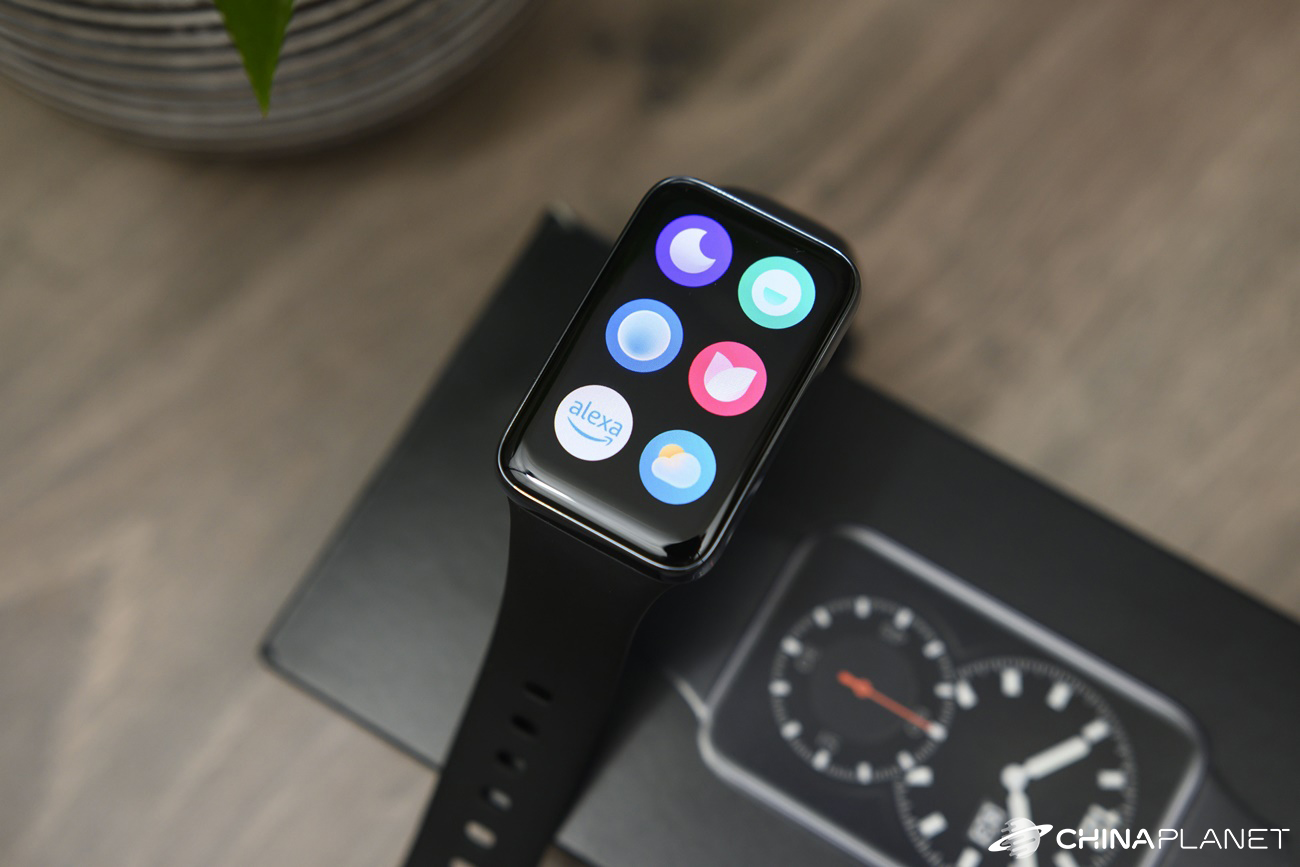 However, compared to the classic Xiaomi Smart Band 7 bracelet, it only has GPS and training plans. The expected NFC is missing here, so you won't be able to use the novelty for contactless payments. This is a big disappointment, as the Chinese version of the bracelet also has NFC.

Overall, it can be said that this is an enlarged Smart Band 7 with GPS at twice the price. So is it worth buying? It is something to consider and will probably decide whether you use GPS or not.

A large 50 liter rucksack suitable for hiking and fitness. There are up to 8 colors to choose from and the offer is in the EU warehouse