NexTool 12 in 1 review: a fancy flashlight with a Bluetooth speaker

The Nextool brand, which also belongs to the wide Xiaomi family, is already well known thanks to its flashlights, reflectors and various gadgets. This time we tested a novelty, a flashlight NexTool 12 in 1  or the full name NexTool Outdoor 12 in 1 Thunder Music Flashlight.

In the review, we will look in detail at all the features of the new product, of which there are quite a few. As the name suggests, it is a multifunctional flashlight with twelve gadgets.

This interesting LED flashlight was provided to us for testing by an international seller Banggood. It currently has the best price thanks to the coupon you will find in our article on XiaomiPlanet.sk.

The flashlight was delivered to us via duty-free transport Banggood Express within 14 days, with delivery from a Chinese warehouse.

The new NexTool 12 in 1 flashlight comes in a very compact white box with dimensions of 20.7 x 7 x 6.8 cm. The flashlight is stored in a retractable box, where it is protected not only by the internal reinforcement of the box but also by silo. 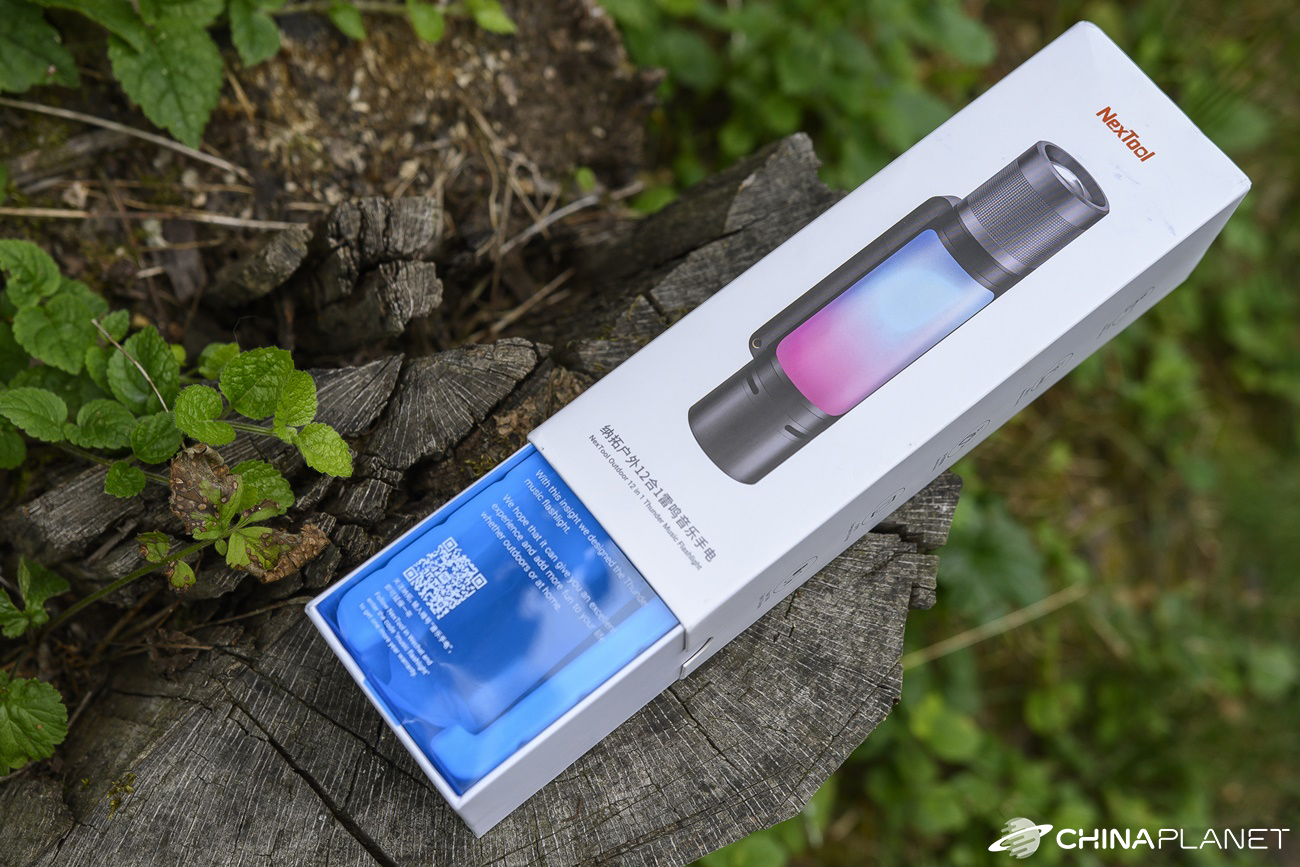 Under this reinforcement we find a paper envelope. It contains a manual in Chinese and English along with a short charging cable (USB-C) without an adapter. 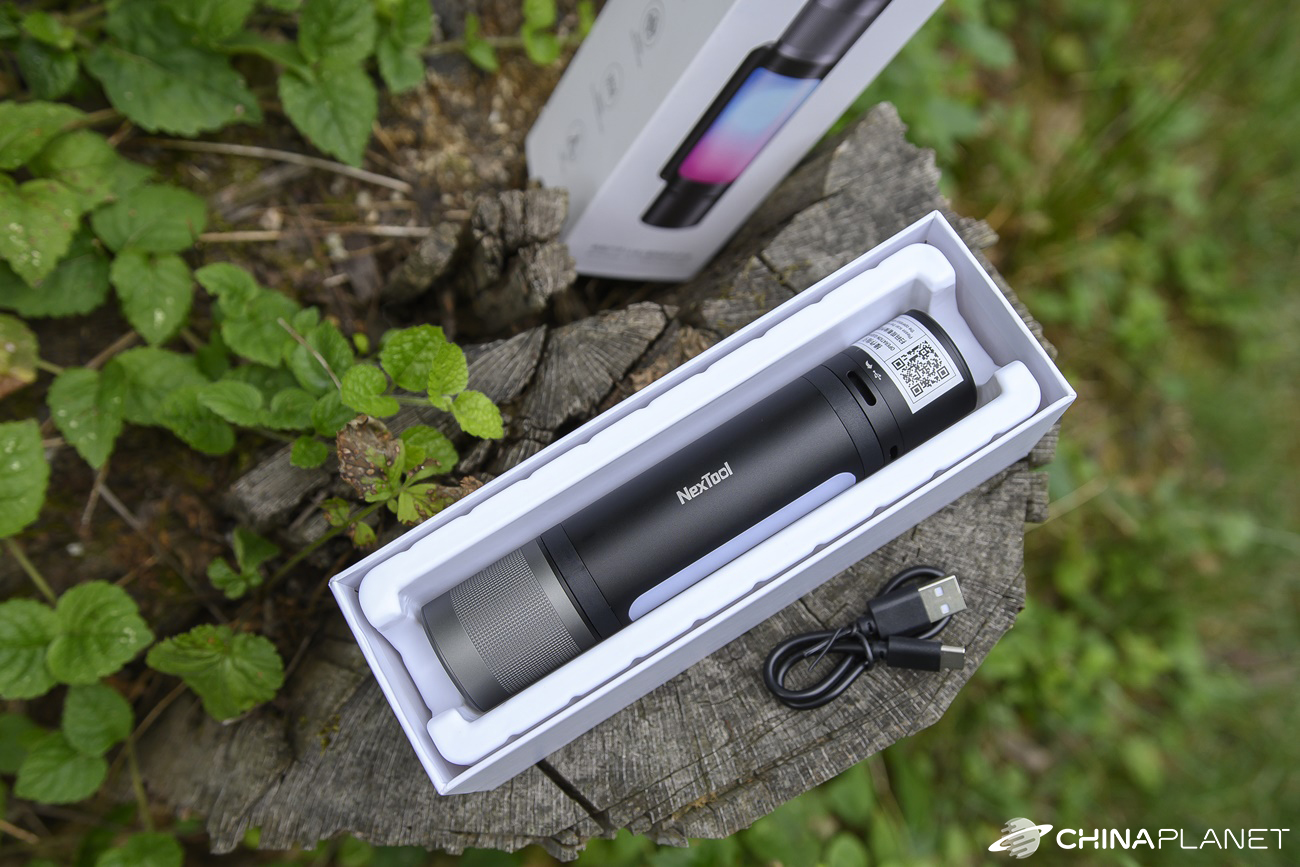 The processing quality and design of the NexTool 12 in 1

Like most other higher quality flashlights, the NexTool 12 in 1 is mostly metal, made of aluminum. It gives a very high-quality impression to the touch. All parts fit together perfectly and hold together perfectly. 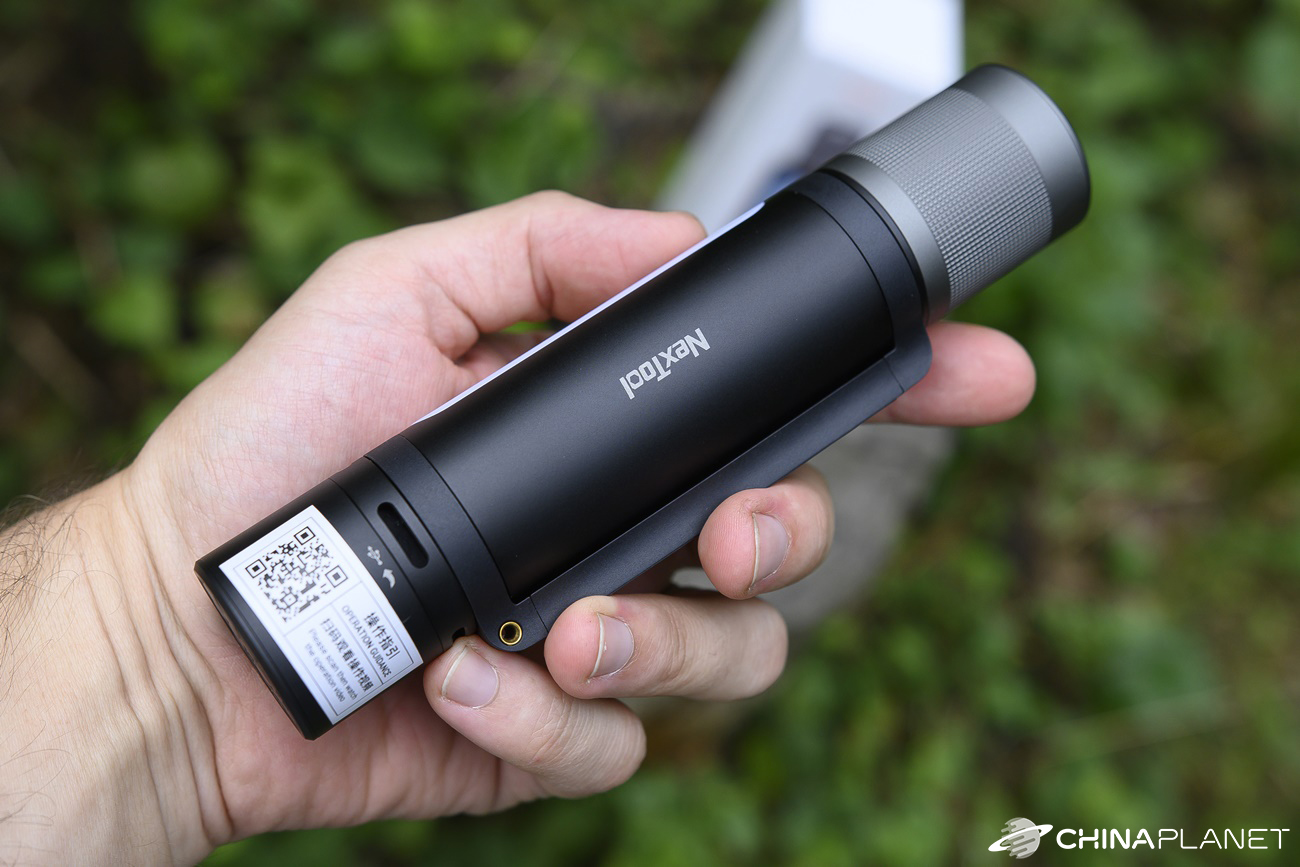 In terms of design, we have nothing to complain about. The body of the flashlight is mostly black, complemented by a dark gray ring around the light source. Its dimensions are 173 x 36 x 43 mm, its weight is 248 g, and it fits perfectly in the hand. 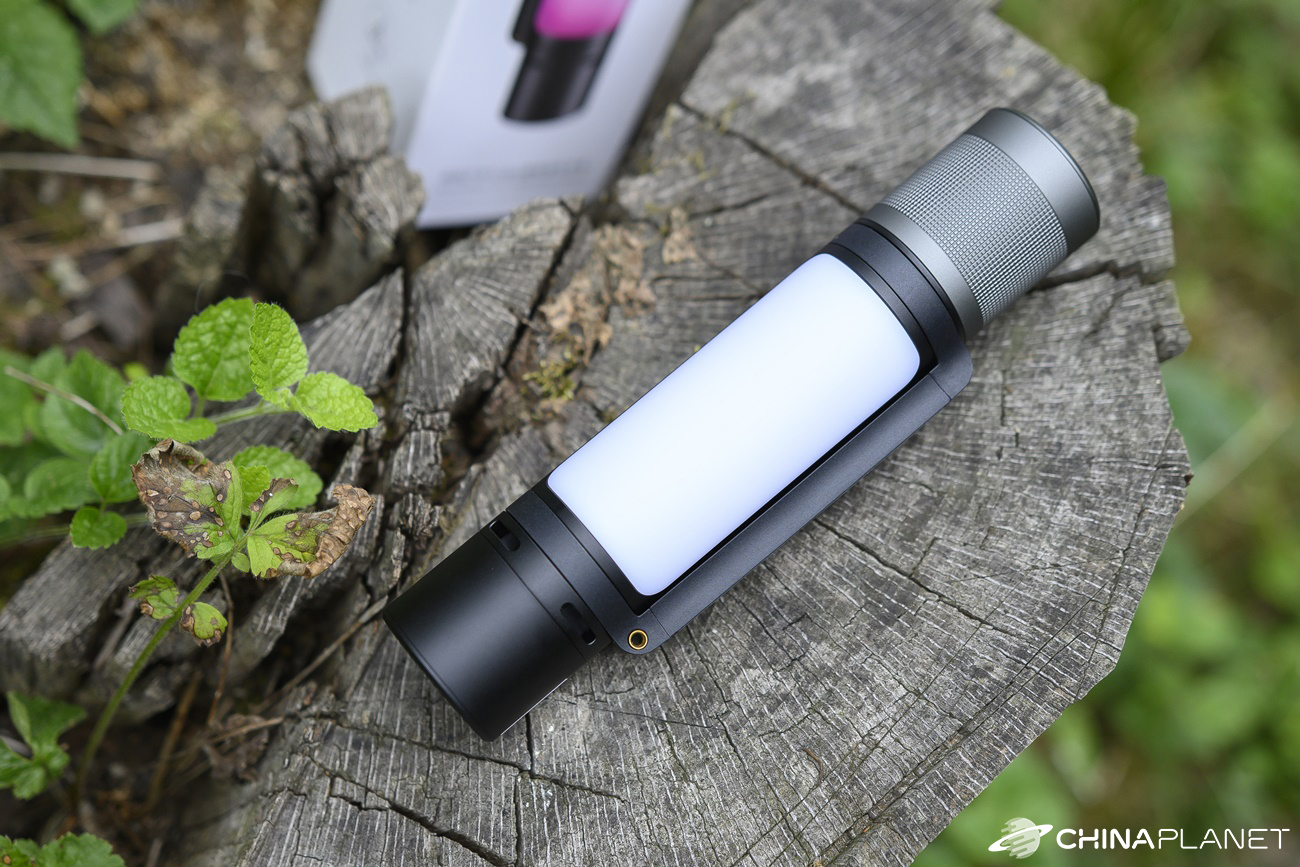 A less traditional element is the side light, which is located under a white plastic cover. We will talk more about its functions later.

Location of control elements and other uses

Since it is a multifunctional flashlight, there are quite a lot of controls. The main buttons for controlling individual functions are located at the end. It is a series of 7 buttons arranged in a circular element. 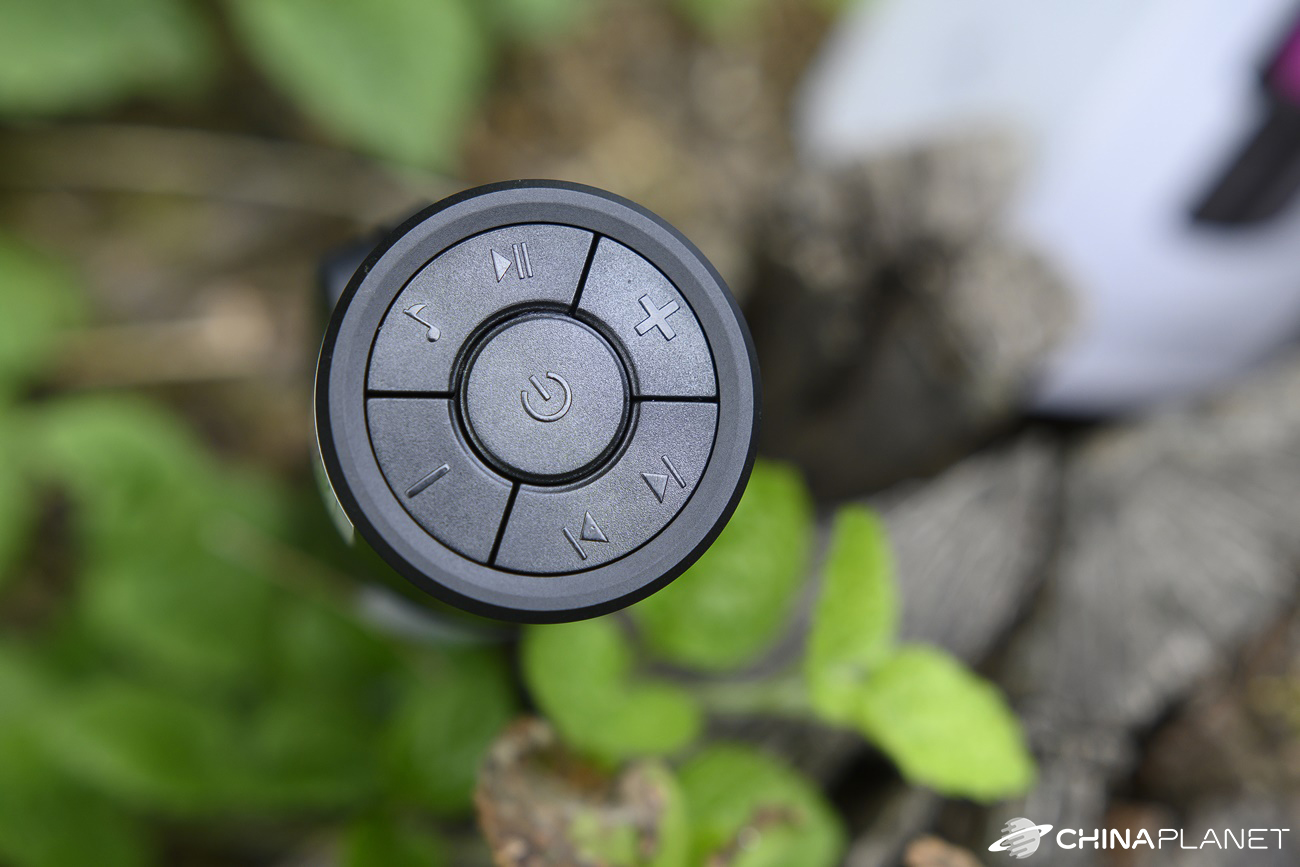 The middle button is used to turn on and off, while the other buttons adjust brightness and switch music, as the flashlight also has a hidden speaker. On the side there is a rotating handle, which is magnetic, and in its center we also find a thread for attachment to a standard tripod. 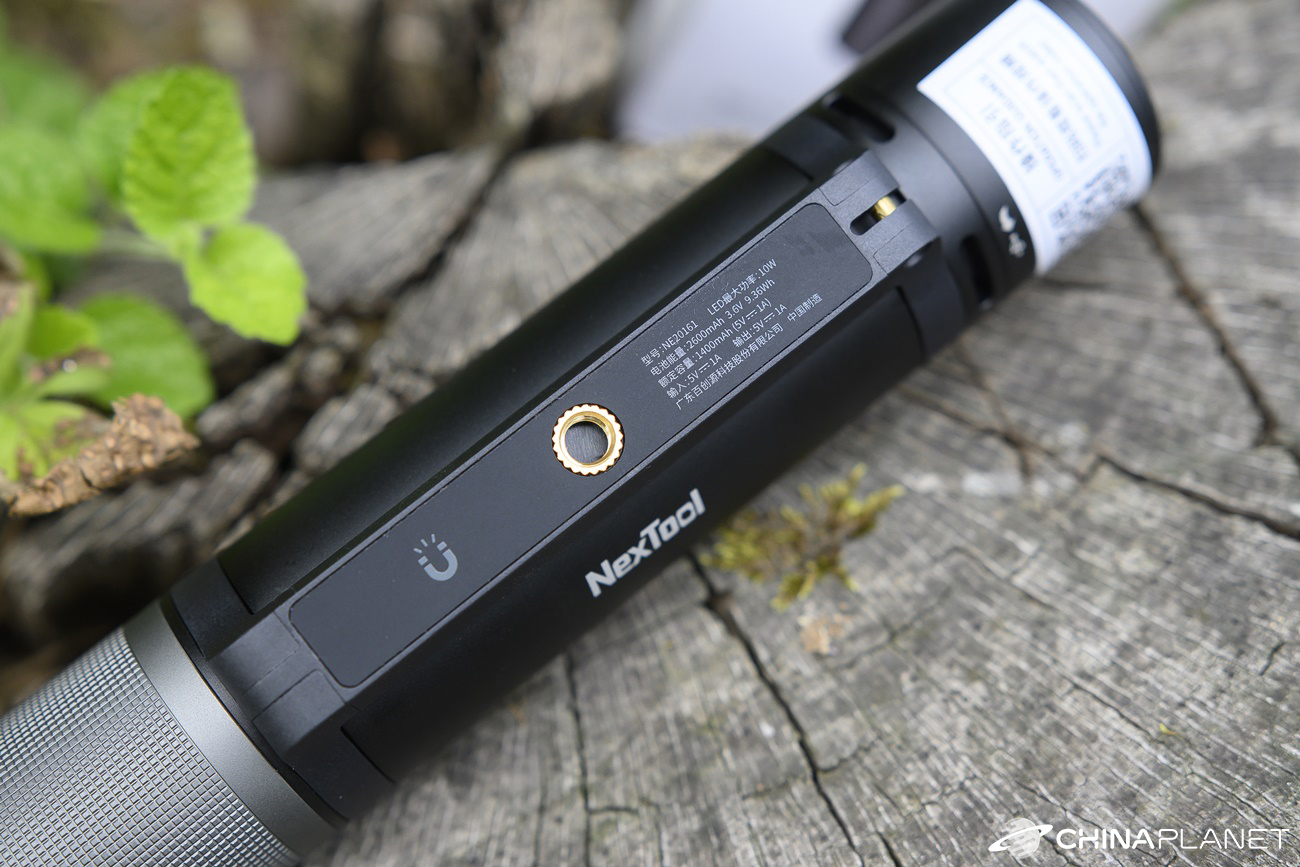 The charging connectors are hidden under a screw cover around the control buttons, and below that is a thin strip with four holes for audio output.

The main light of the NexTool 12 in 1 flashlight is of course white and is turned on by holding down the power button for a little longer (about 1.5 seconds). However, with further short presses of this button, we can also switch to red, green or blue. 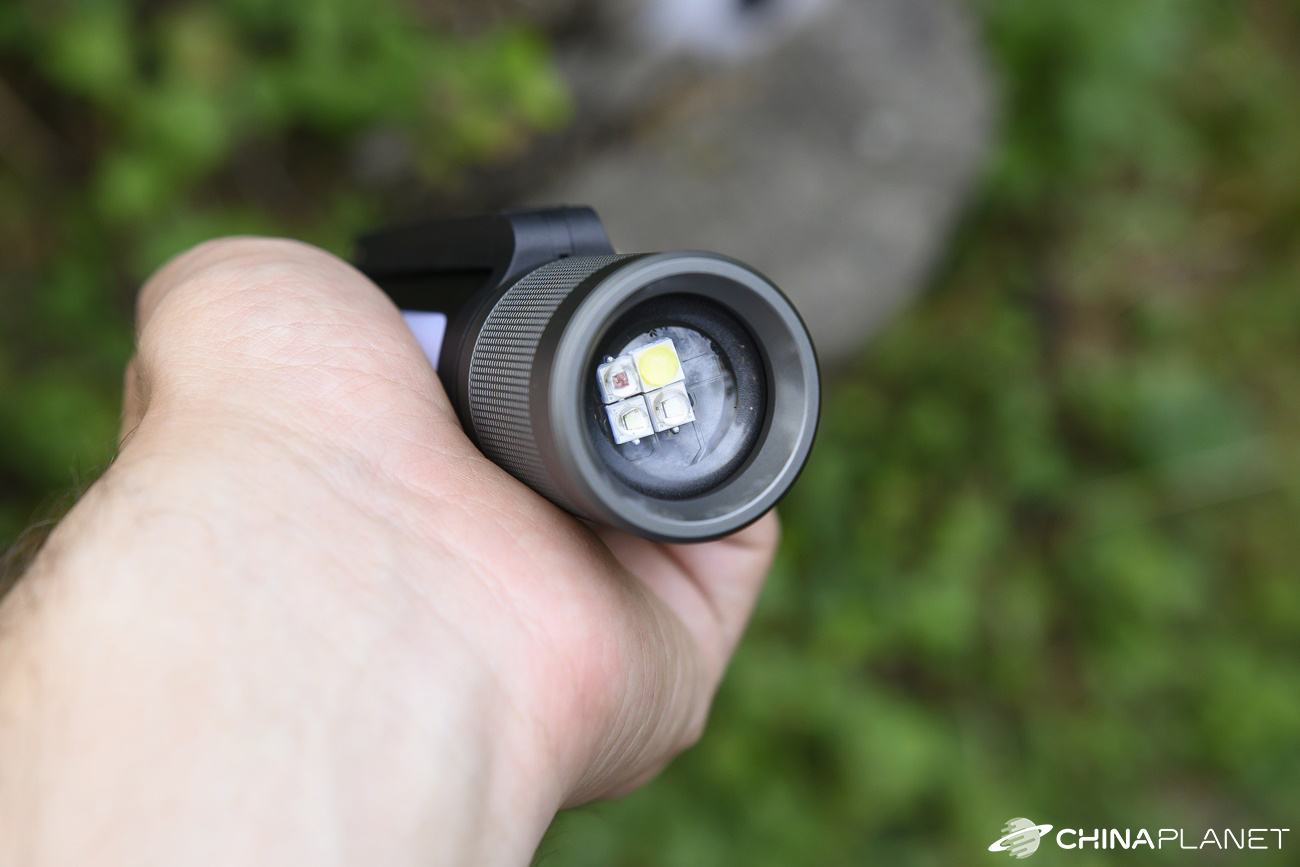 After turning the flashlight off and on again, the color you last used before you turned off the flashlight will light up. There are four LED light sources, each of which serves its own color.

With all four colors, it is a matter of course that the light intensity can be adjusted in five steps using the "+" and "-" buttons. The highest level represents a luminosity of up to 900 lumens with an afterglow of up to around 245 m. 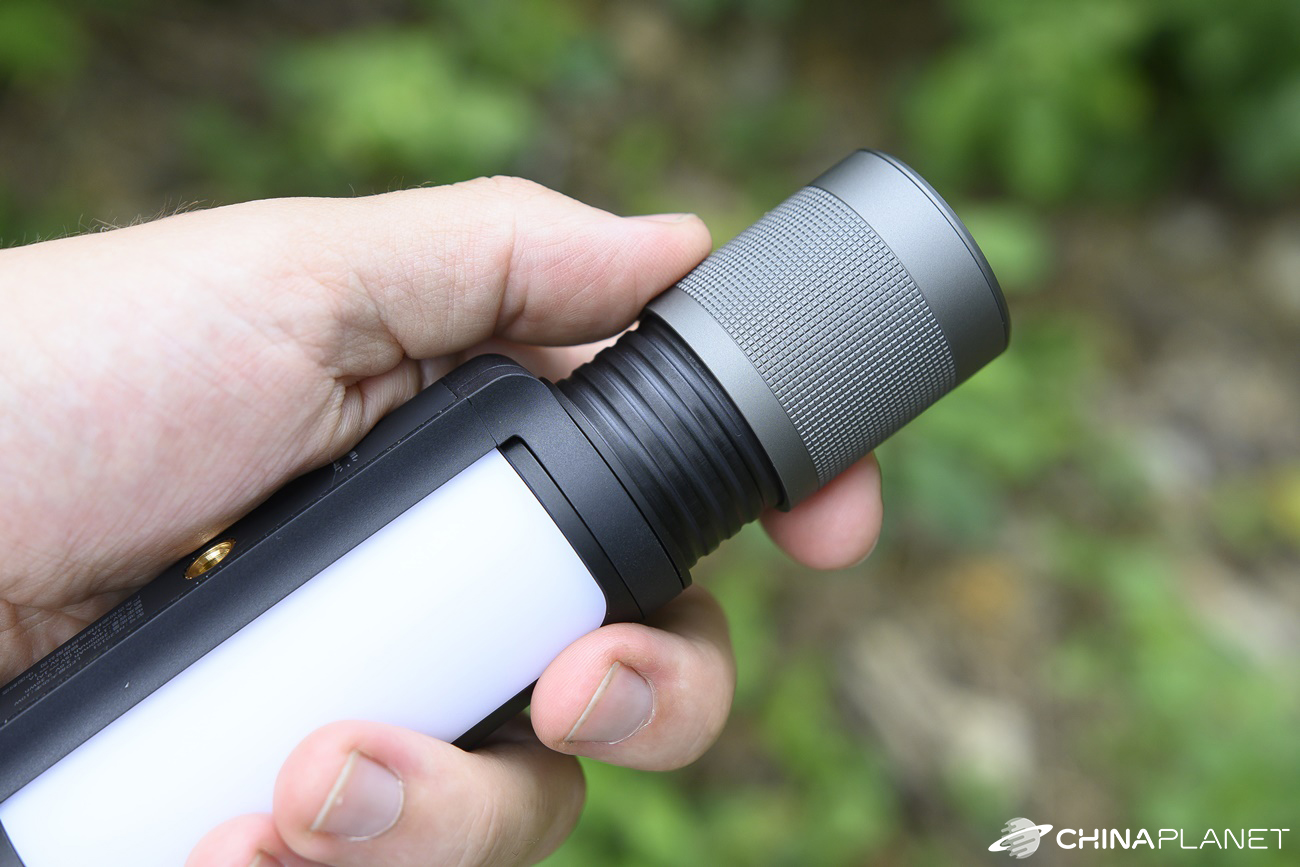 We are missing here the adjustment of the light temperature in white lighting. However, there is no lack of setting the light dispersion by pulling out the hoop around the main light source, which is the LEDs.

After two quick presses of the main button in quick succession, the side light, which has several modes, turns on. The first is a classic white light with a brightness of 5-145 lm and an afterglow of approximately 12 m. 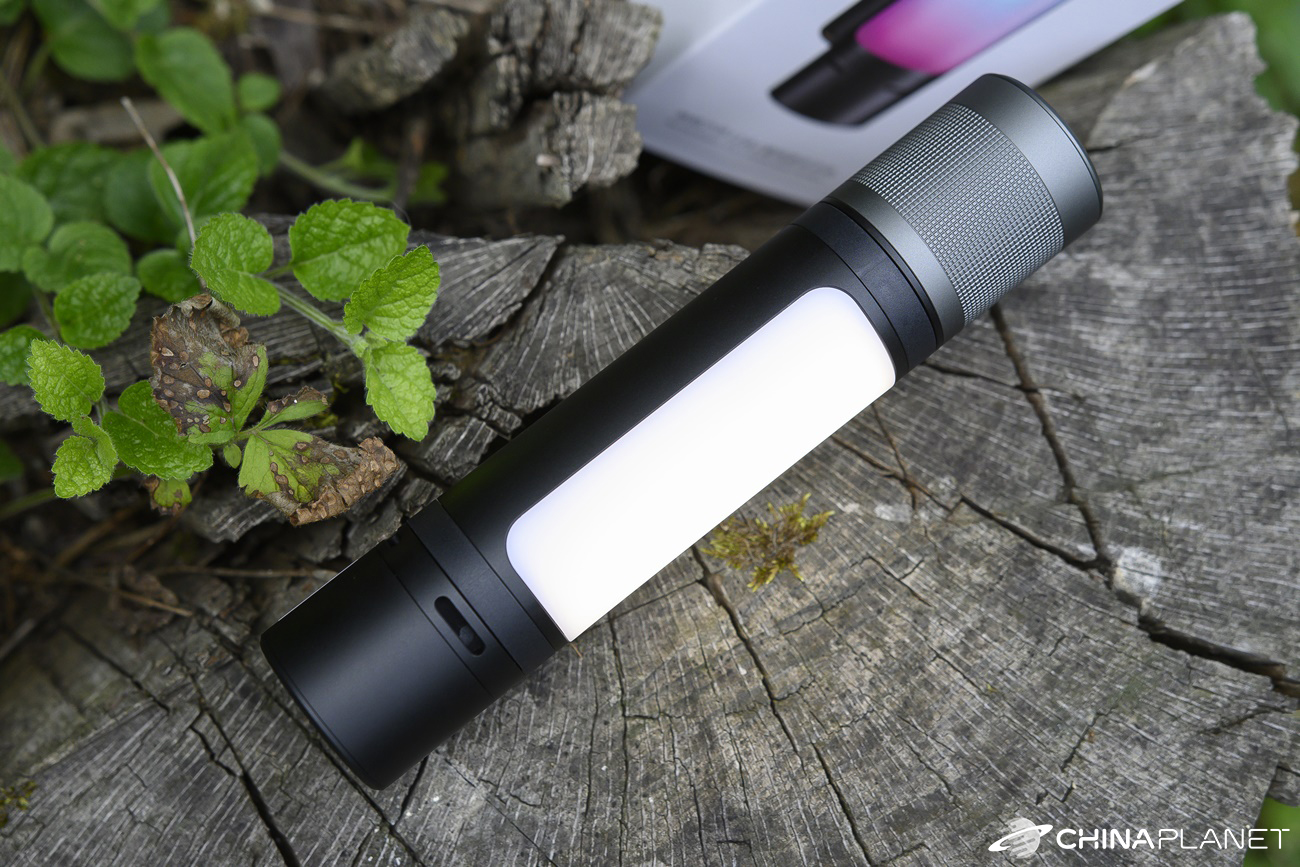 With another short press of the middle button, we switch to the second mode, which is an interesting rainbow light with a moving effect. With the "+" and "-" buttons, we can switch between three brightness levels, which also change the speed of color change. 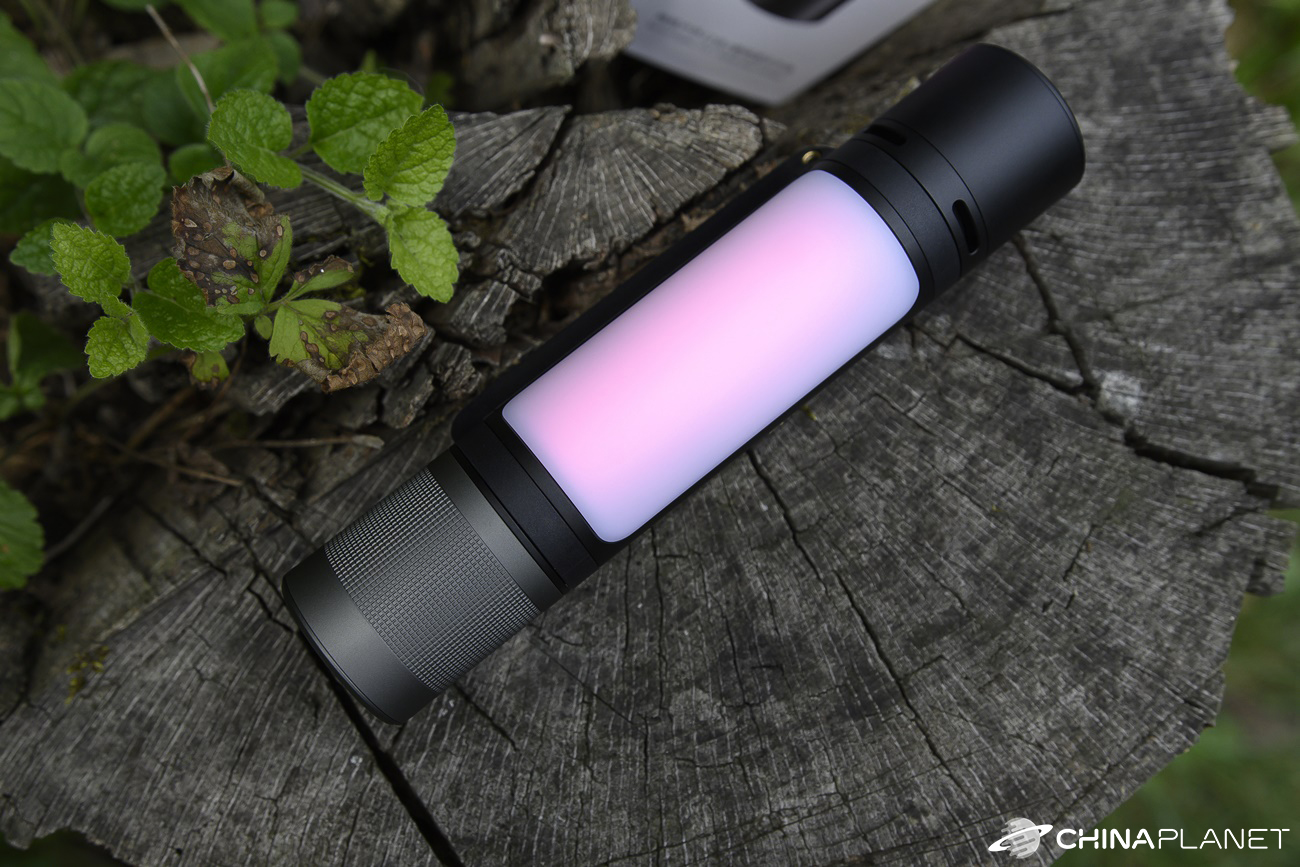 The third mode is called "Sound Atmosphere Lamp" and it is also a colored light that changes colors to the rhythm of the music played through the Bluetooth speaker. If no music is currently playing, the colors and their changes are random.

The fourth mode represents red light with a brightness of 1-4.5 lm, and the last, fifth, belongs to flashing light in the same red color.

An interesting function is the so-called emergency mode. It is activated by holding down the main central button for 3.5 seconds. During this mode, both flashlights, main and side, are activated, flashing different colors, which represents a kind of warning. It is also accompanied by an unpleasant high-pitched beep. 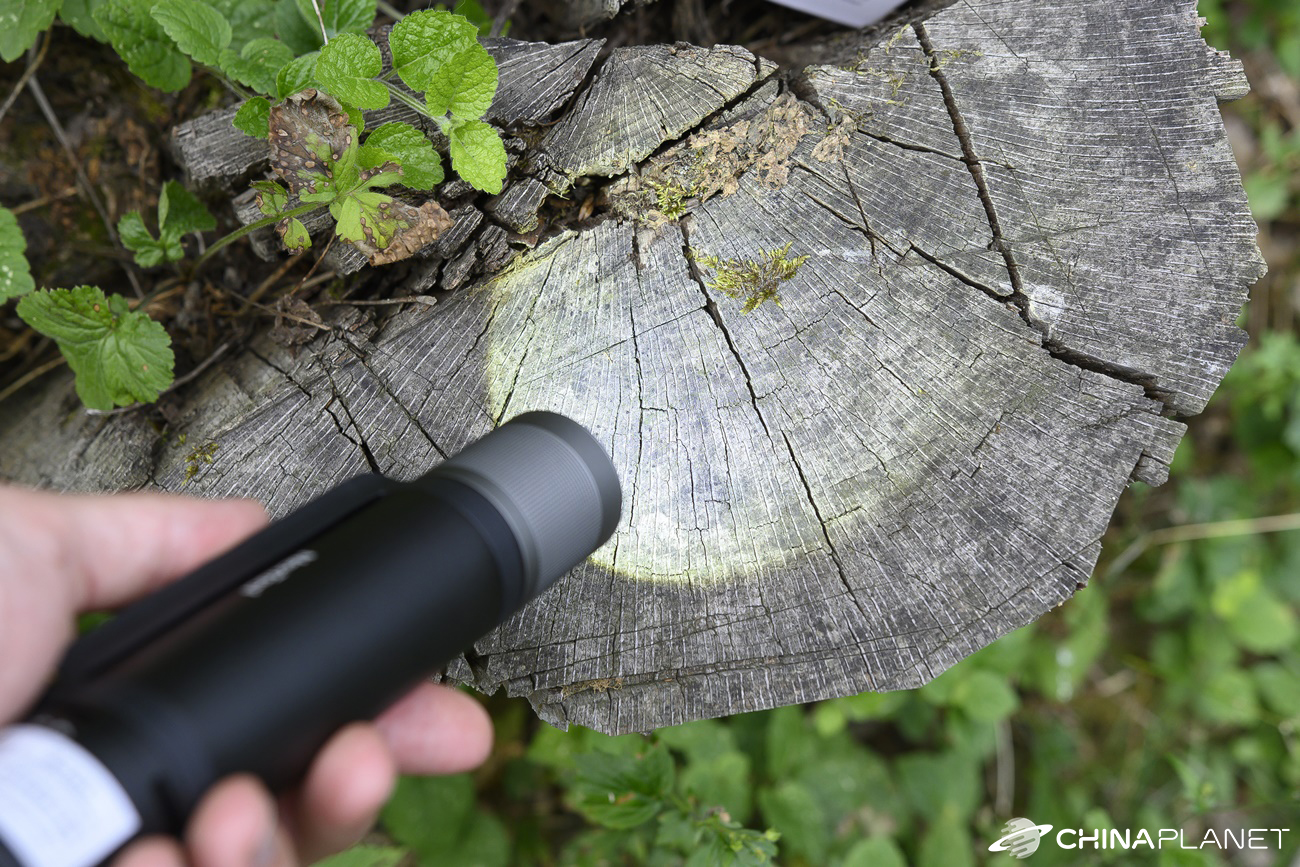 An unusual addition to the NexTool 12 in 1 flashlight is a built-in Bluetooth speaker with four holes on the sides of the flashlight body. It is activated by holding down a pair of buttons - play/pause and the button with the note symbol. 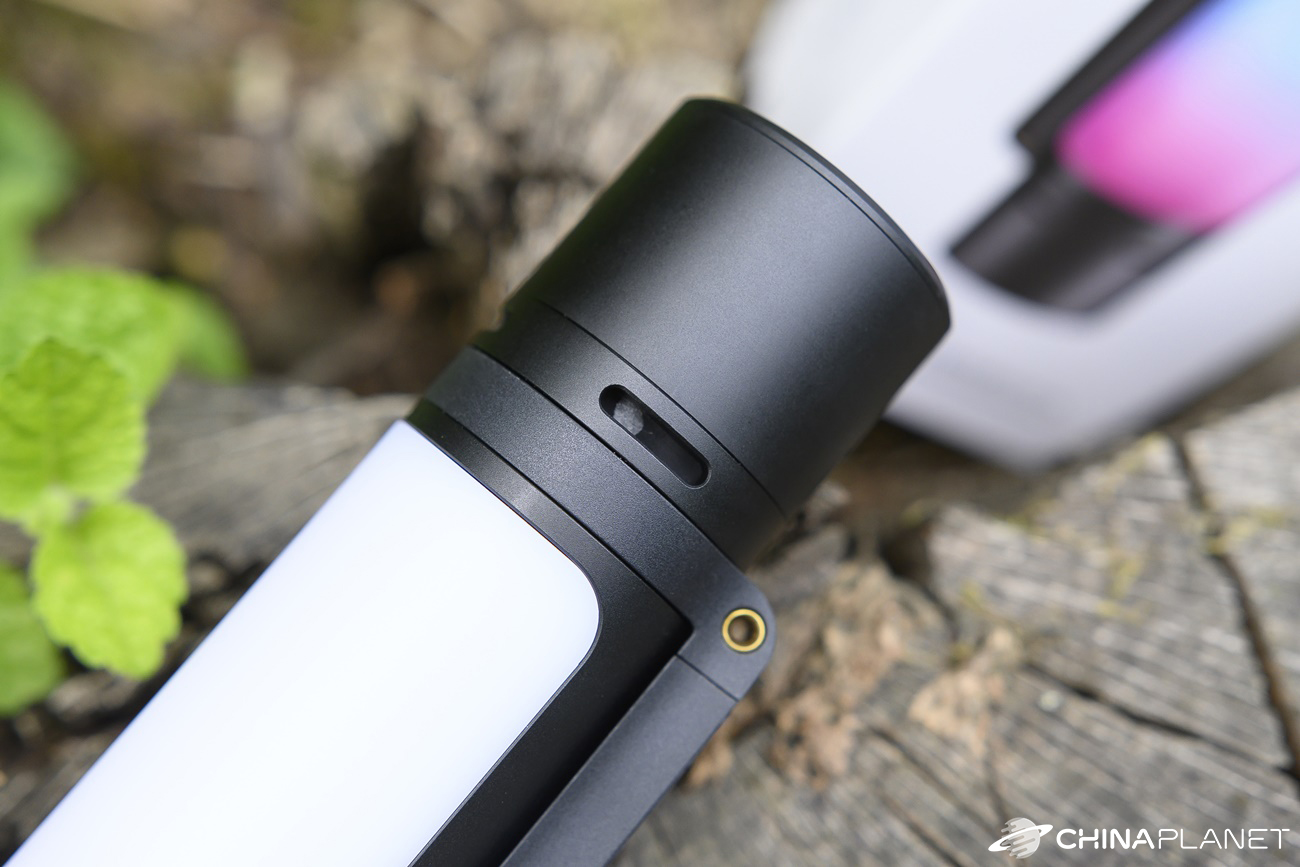 When activated, a Chinese voice will be heard to turn on Bluetooth. Then just search for the NexTool flashlight in the list of available Bluetooth devices on your smartphone and the pairing is done. The quality of such a small speaker with a power of only 2 W is not very good, but that was to be expected. Its performance worsens at higher volumes, where the sound is no longer clear. 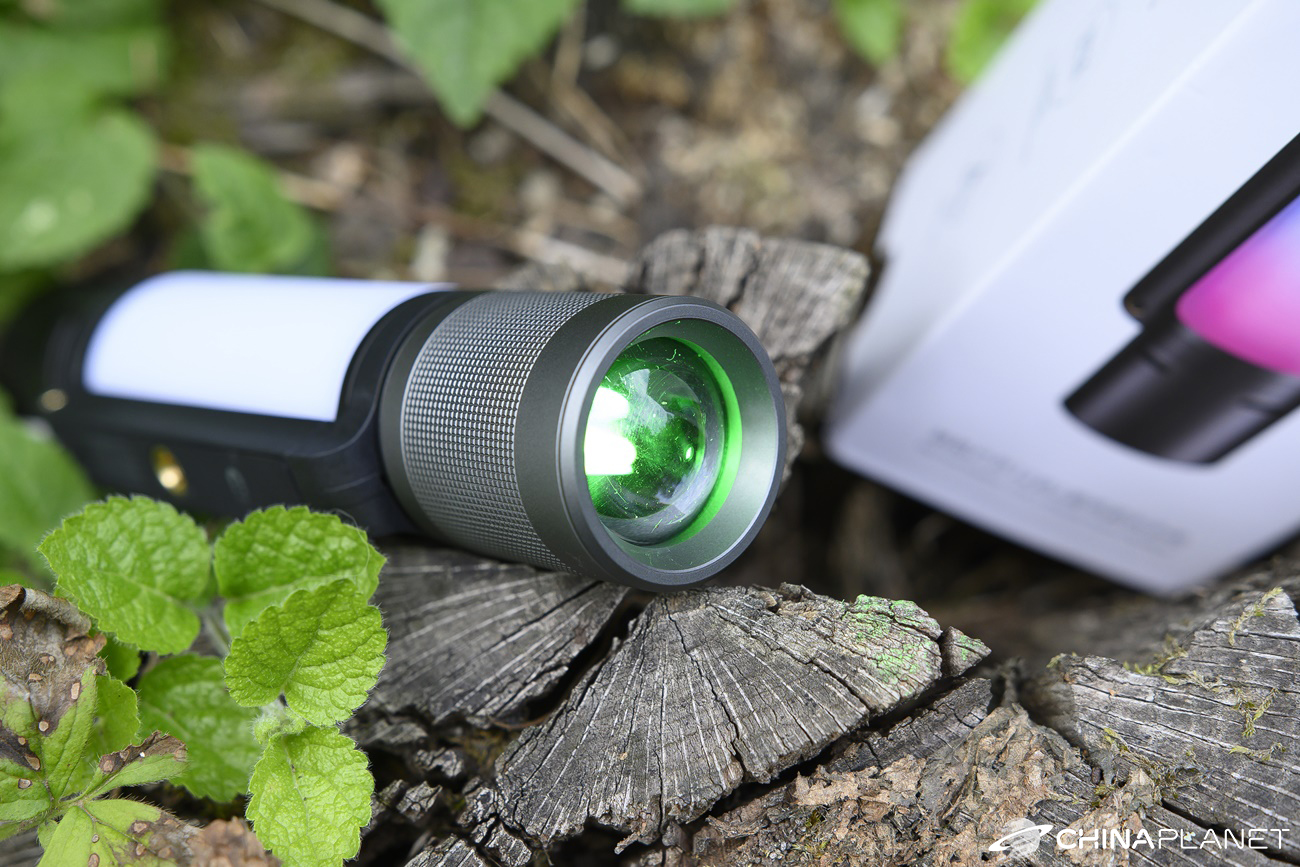 This is an interesting addition, which is certainly not traditional for flashlights, but due to the low quality of the speaker, it does not make much sense. It's just a Bluetooth speaker that you connect to your smartphone, but most smartphones have better speakers than the one in the flashlight, even if with a lower volume.

The NexTool 12 in 1 flashlight hides a 2600 mAh / 3.6 V / 9.36 Wh battery. It is of course integrated, so it is not replaceable. The USB-C charging port is hidden under a rotating cover in the vicinity of the control buttons. You simply unscrew the cover to access the USB-C and USB-A ports. In this way, they are perfectly protected against dirt. 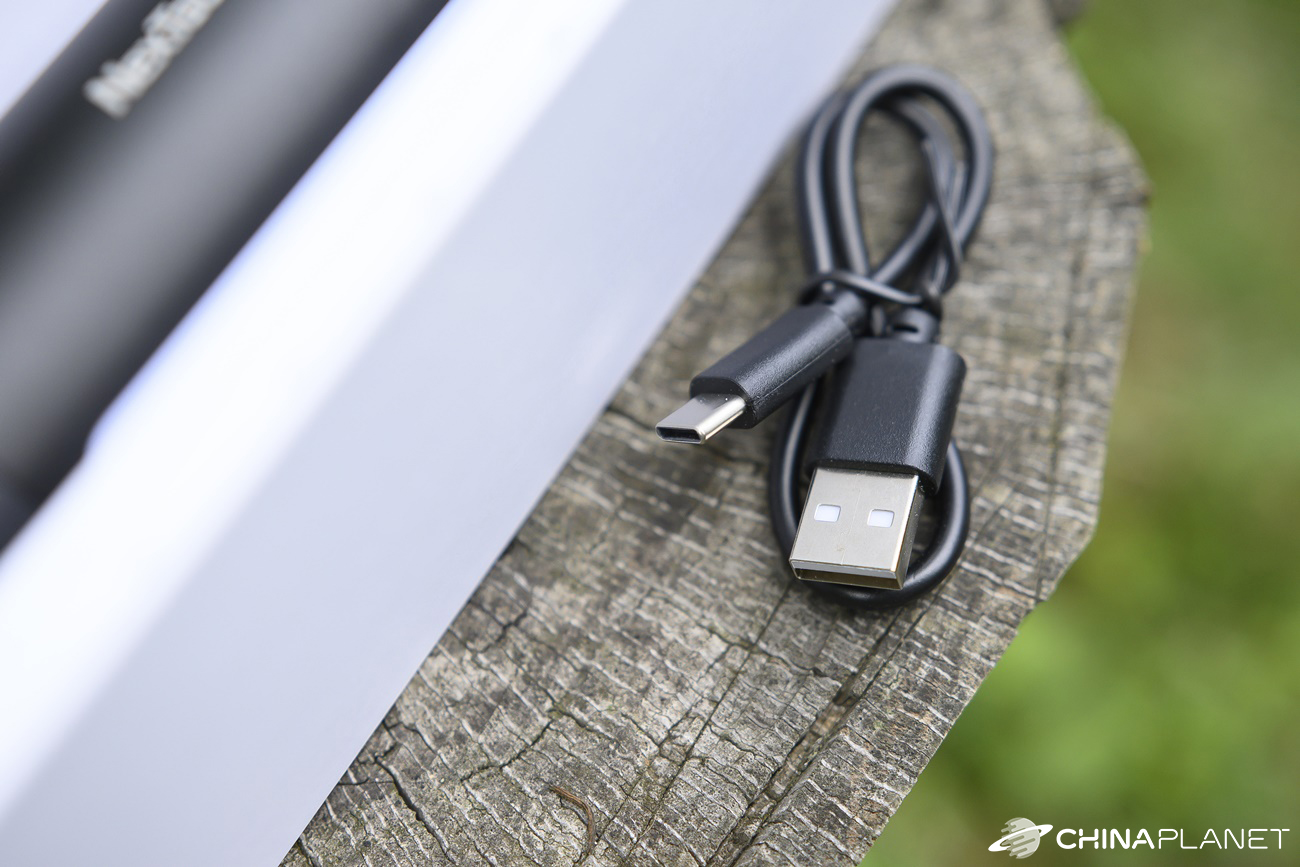 The USB-A port is used for charging other devices, so the flashlight will also serve as an emergency power bank. Emergency because it has a lower capacity than normal smartphones, which is why you can't fully charge your smartphone with it. 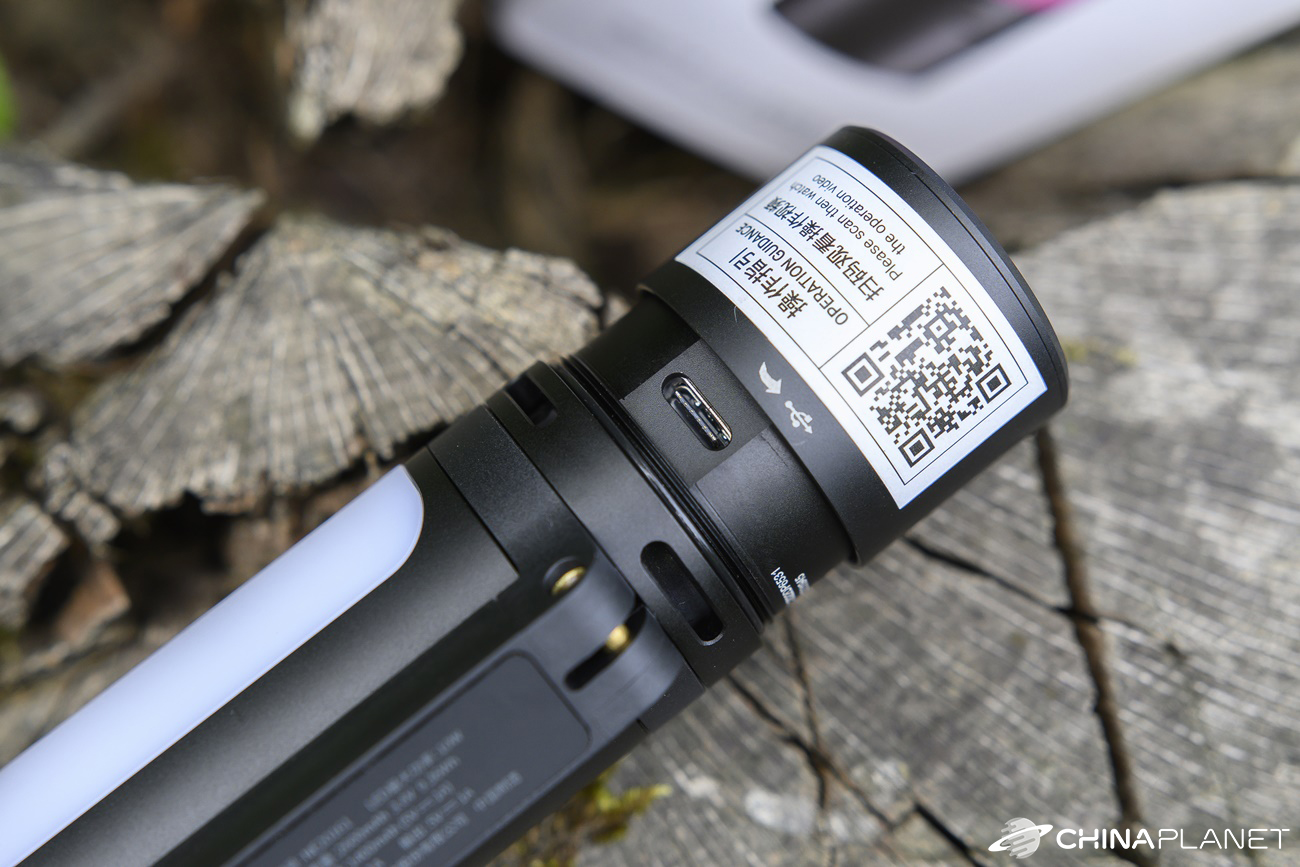 Duration depends on the used mode and brightness level. At the maximum luminosity of 900 lm, it is approximately 2.4 h, but on the other hand, at the lowest luminosity, we can get up to 40 h of endurance per charge. In addition, with colored lights, which have a lower brightness, the duration is in the range of 45-48 hours. However, any battery status indicator is missing. 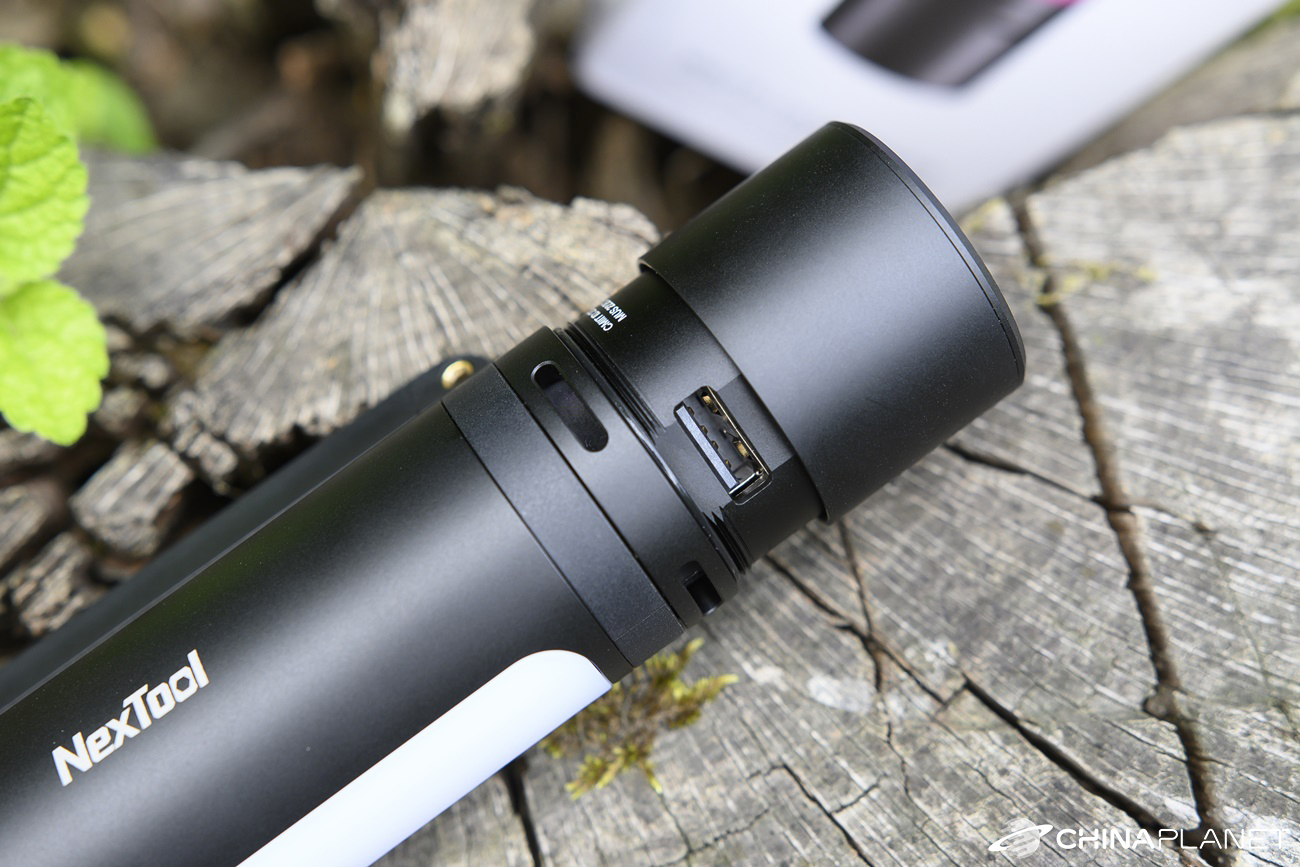 NexTool 12 in 1 is not just an ordinary flashlight. It is a multifunctional flashlight with several possibilities of use. It offers the function of a classic flashlight with the possibility of brightness regulation in the range of 35-900 lm with a afterglow of up to 245 m. In addition, it also has an effective side, colored light, a magnetic rotating holder and a thread for a tripod. 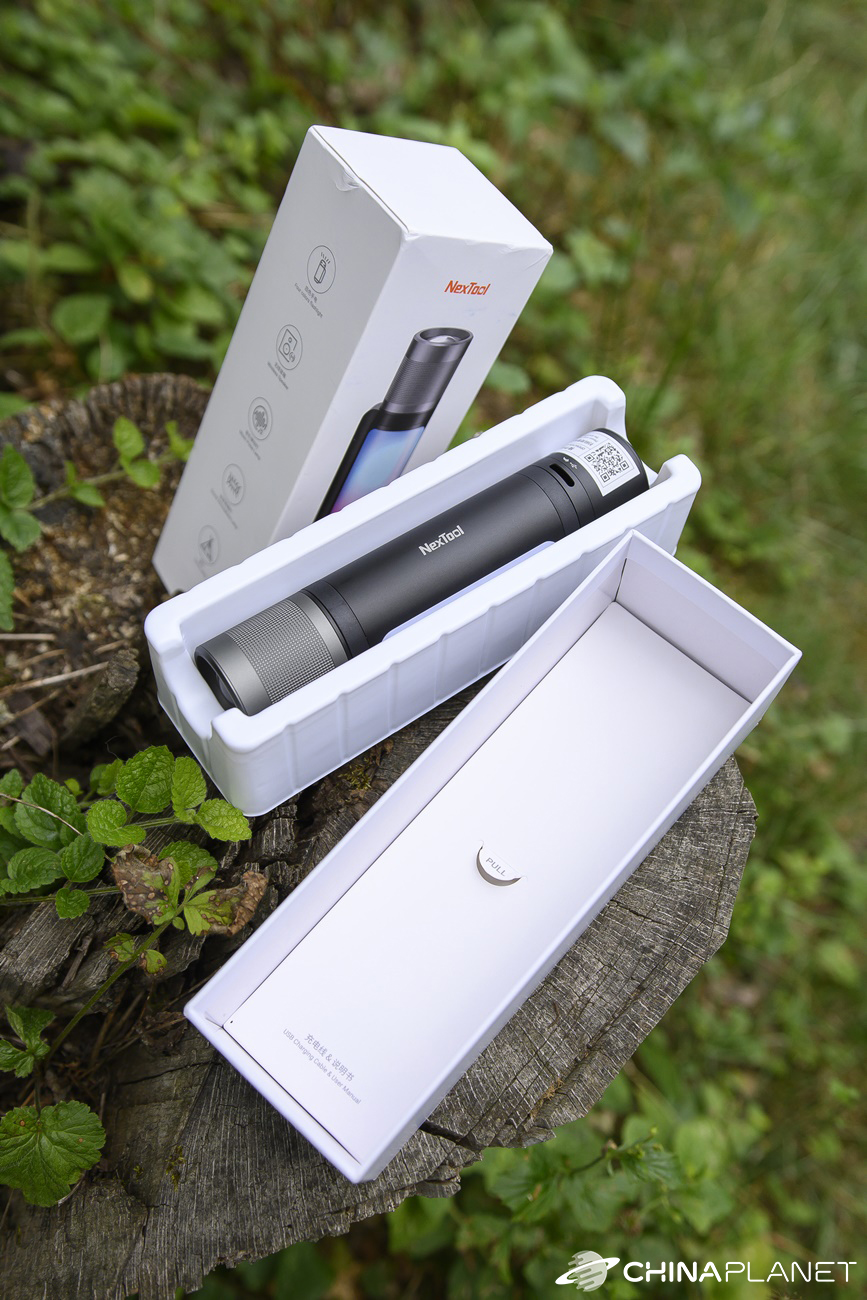 Also interesting is the emergency mode, the Bluetooth speaker complete with colored light flashing to the rhythm of the music and the possibility of using the flashlight as an emergency power bank. However, the quality of the speaker is rather poor and the battery capacity is only sufficient for emergency charging of the smartphone.

However, the flashlight will find many uses, whether as a classic spot flashlight for illumination in the dark, a mounting light for car repairs, when fishing, camping, or even while working at the computer.

New coupon: This stylish table lamp from Baseus it has smart dimming, luminosity of 500 lm or real light color