[REVIEW] Akko 3084 Silent is a wireless mechanical keyboard with a beautiful look and backlight, Gateron switches or PBT keys

The mechanical keyboard industry has its own culture, especially among gaming enthusiasts. The quality of the piece depends on the switches, the materials used for the keys, the tuning of the keystrokes or the possibility of customization. There are many factors, which is then reflected in its price. Akko 3084 Silent however, it offers almost all areas of quality mechanical keyboards at a great price up to 80 €.

It is especially interesting for its quality switches Gateron, which has emerged in its industry to prominence, sublimated 85% PBT keys, which do not just dry, beautiful adjustable backlight animations, USB-C connector, 1800 mAh integrated battery or enhanced Bluetooth 5.0 connection.

You can still have it conveniently

You can find the keyboard on AliExpress, but also on the well-known Banggood. However, only green switches are available, all other variants have sold out. You can also find the last pieces in Czech warehouse with fast delivery within one week, of course without taxes and duties.

When ordering from a Chinese warehouse, choose Banggood Express to Banggood and AliExpress Standard Shipping at the market. 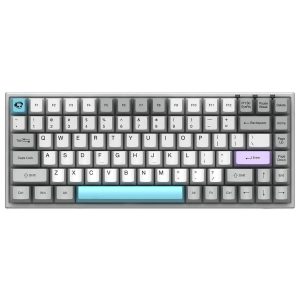 Aliexpress Standard Shipping is available for this product. It is the cheapest way of delivery and goods can travel from 20 days to 1 month.

If you are interested in this interesting piece, you should definitely hurry up. Stocks are selling out fast and it looks like retailers are using Akko's central warehouse because they have identical stocks.

We will start our quick test of the Akko 3084 mechanical keyboard in a different way - by introducing the package. There are also two sets in the keyboard box 7 spare keys in blue and purple, with which you can customize the look exactly to your taste. We really like the death key, which you can use to replace the ESC key. Of course, there is also a tool for extracting keys and USB-C to USB-A cable. 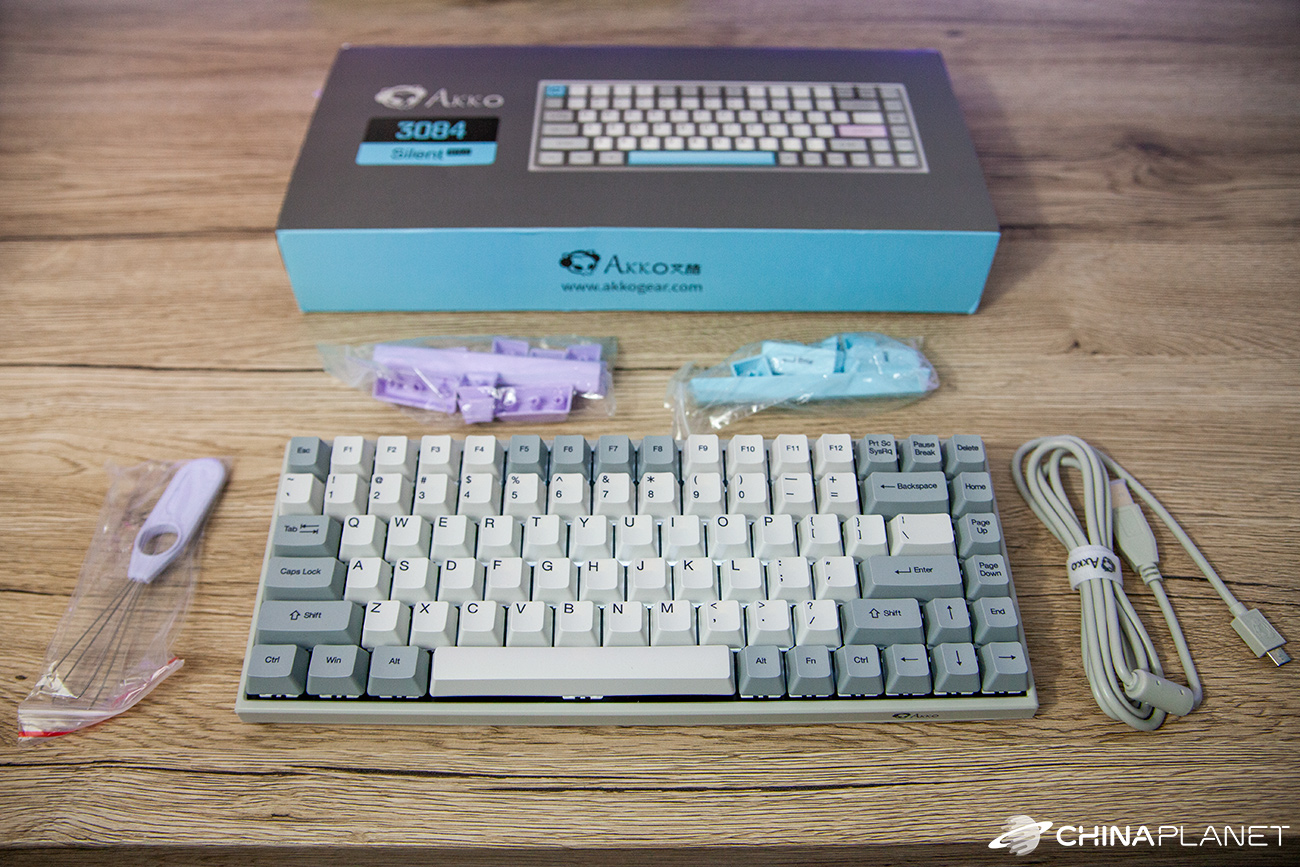 USB-C cable he really surprised us its quality, It is massive and wears in the main gray color of the keyboard, so it fits perfectly with the body of the keyboard. It also looks like it won't be easy to break. 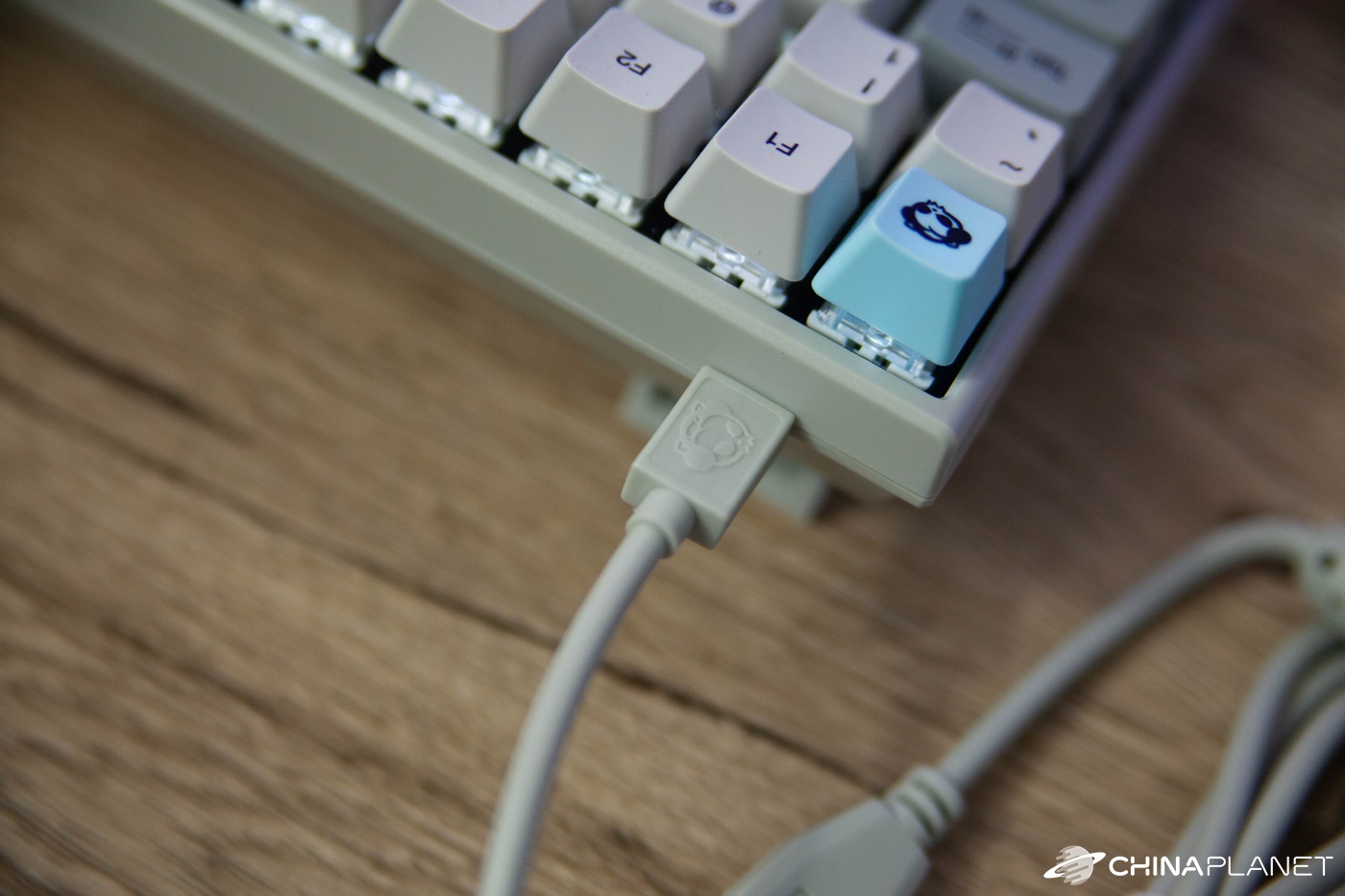 The whole look of the keyboard is tuned to a light gray color with contrasting darker keys on the sides, which gives a really beautiful look and in our opinion it is one of the more beautiful mechanical keyboards. 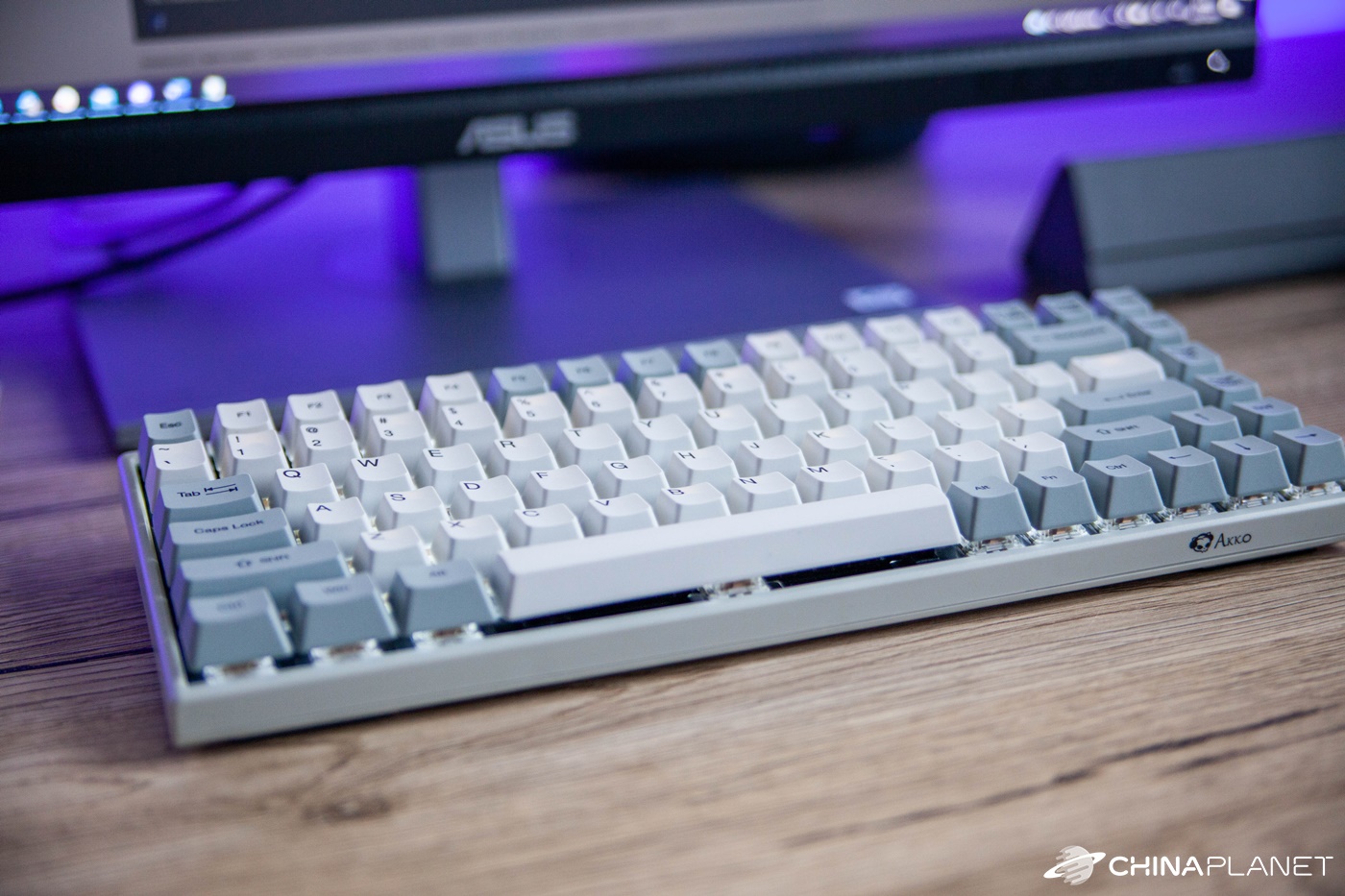 At the bottom there is a switch and two-stage feet for height adjustment, at the rear USB-C interface. Each key is illuminated with white light. The keyboard holds very well on the table thanks to the rubberized parts on the bottom, so it also has stability. 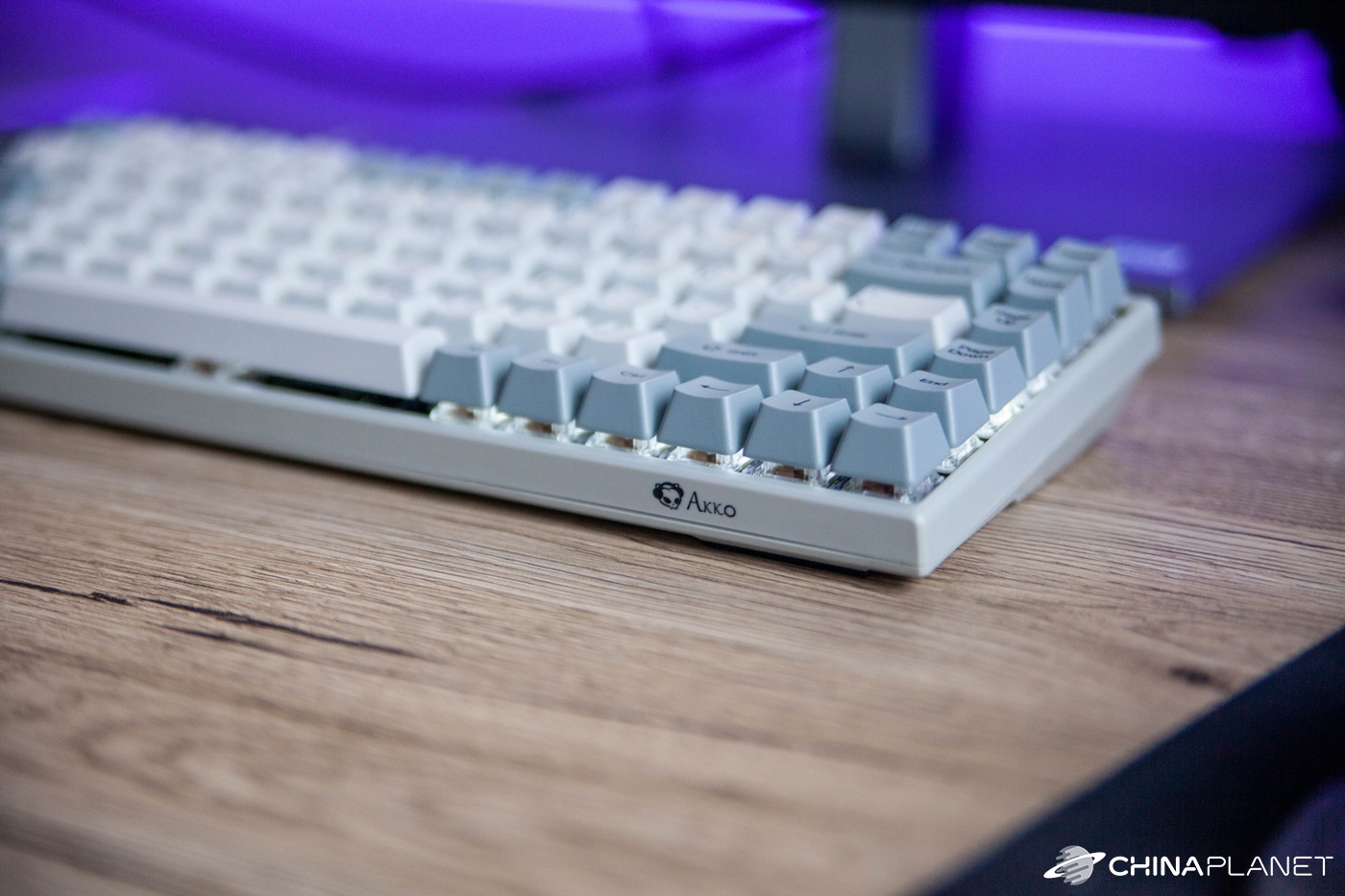 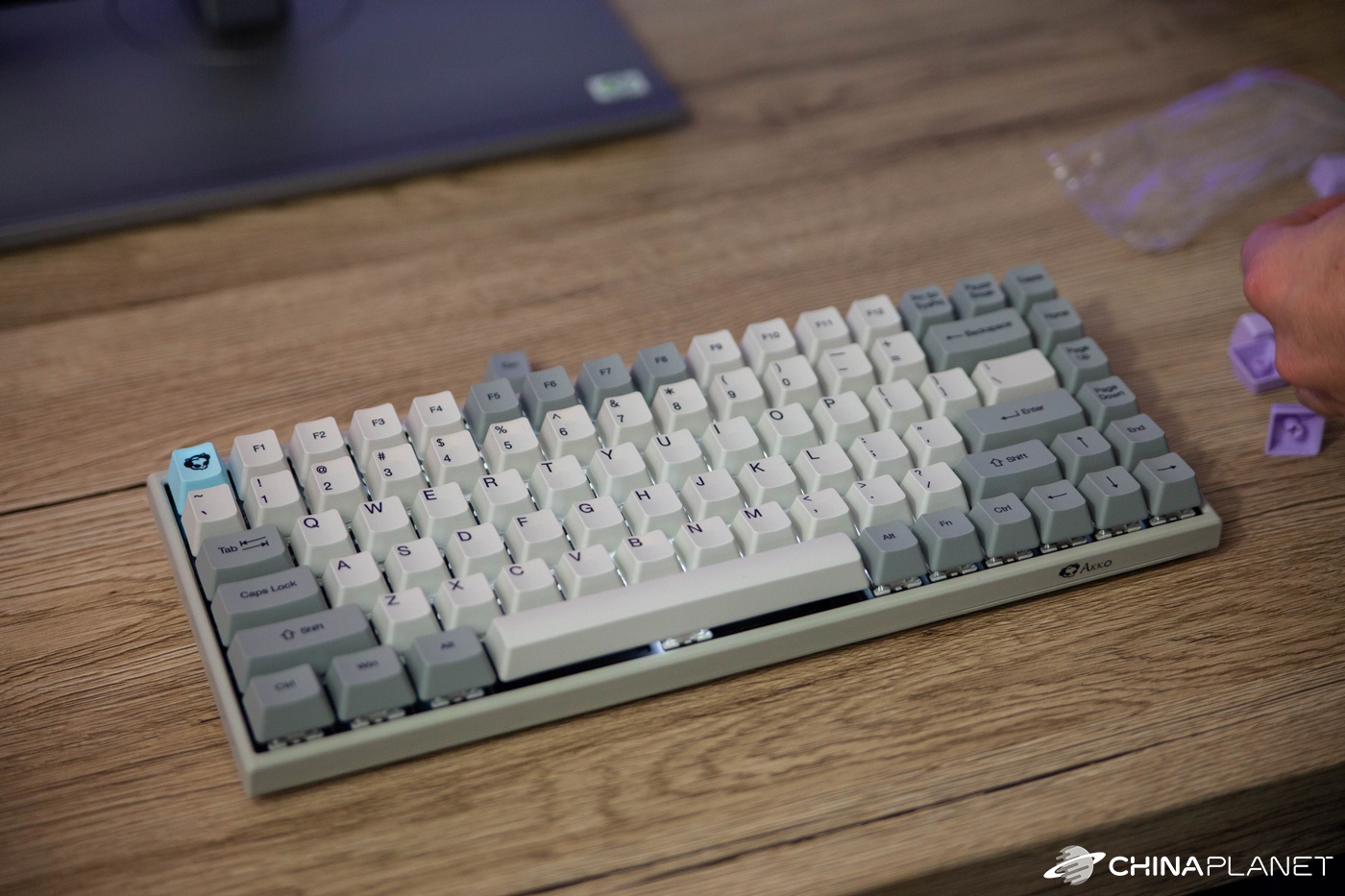 Akko 3084 Silent offers solid construction. When we tried to bend the whole body, we managed to do it only minimally. This means that the manufacturer used quality materials and made sure to last as long as possible, or to withstand minor shocks or falls.

The stabilizers of the larger keys are also doing well and can be pressed as well as when a simple square key hits the center. This is not a cheap Chinese pipe. 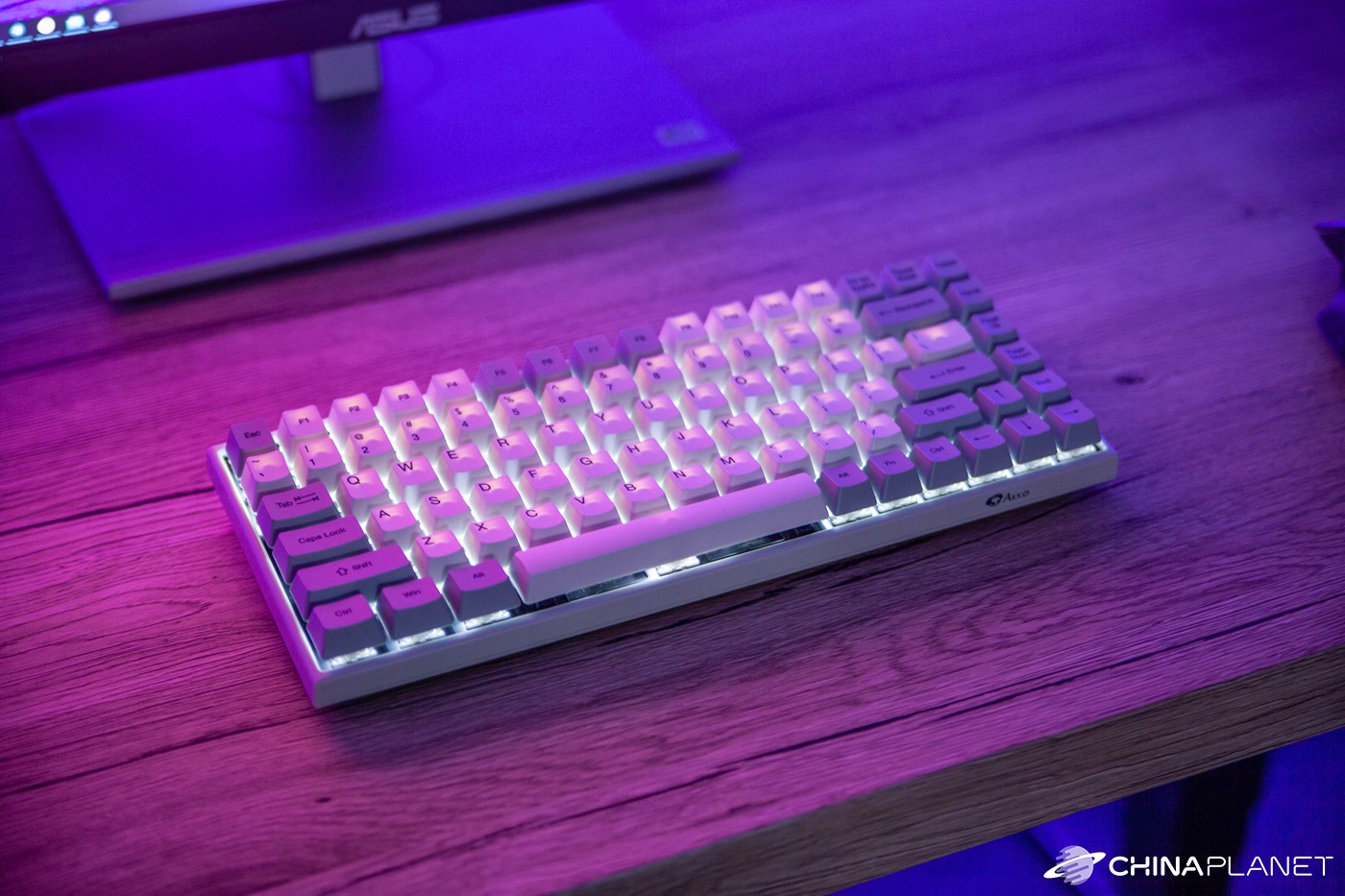 The keys themselves, which have undergone the process of sublimation and their color, resp. even numbers and letters do not dry up even after heavy use for several years. More precisely, it is a type 85% PBT keys. The keys have OEM profile, which in short means they are beveled at the back towards you. From the number line, the bevel starts the other way around, and thus better ergonomics is maintained. 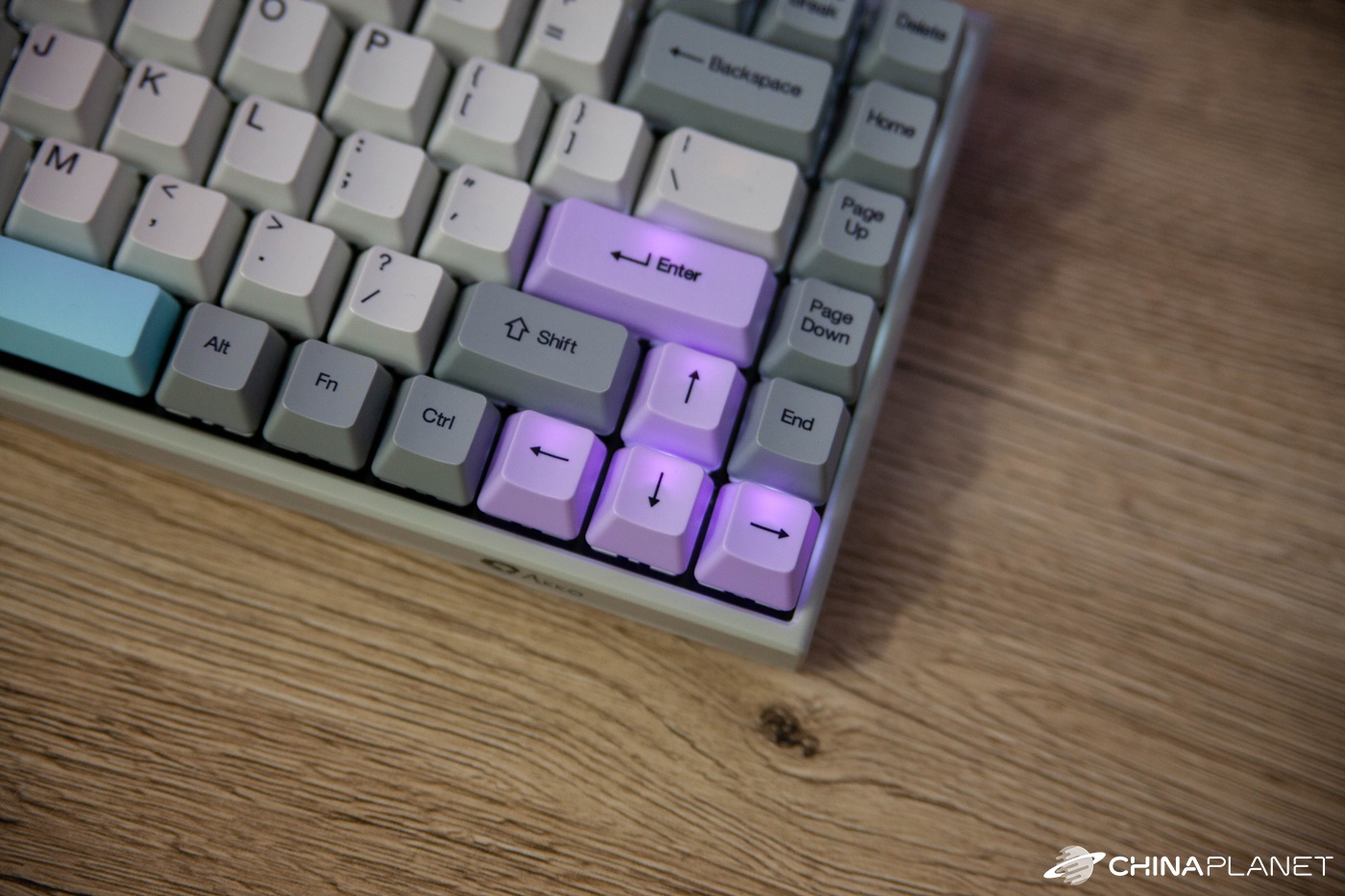 What kind of stylish keyboard would be without a backlight? Although not RGB, with available animations, light intensity and animation speed settings, this is a colorful design enhancement. We really like the available backlight modes, especially those that come from the key you just pressed. 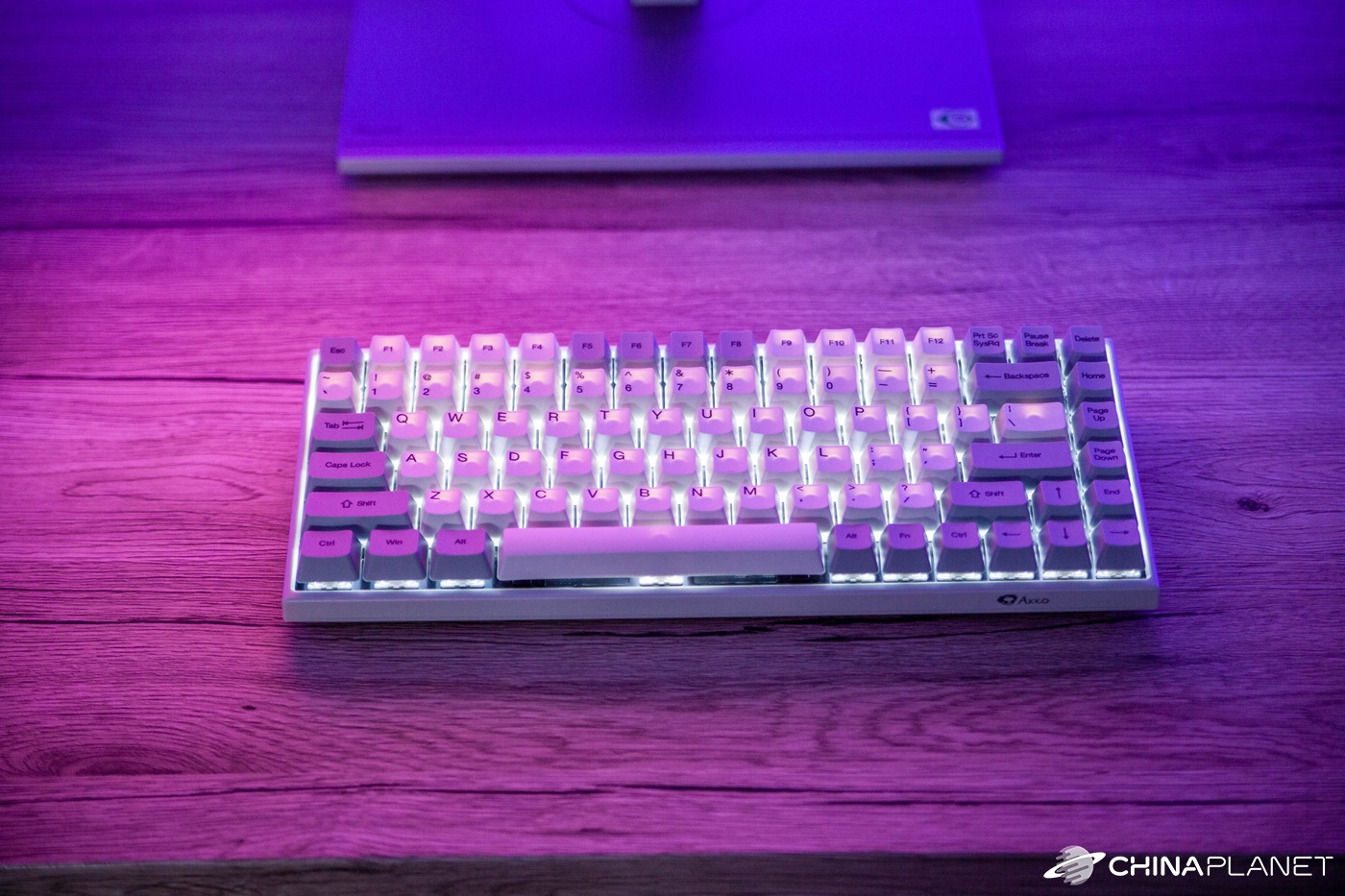 The enclosed manual, which is in English, describes how exactly the backlight is set, but the keyboard shortcut Fn + L is used to turn it on, to change the animation Fn + Delete, to change the speed Fn + left / right arrow and to change the intensity Fn + up / down arrow. With variable speed, it is possible to win nicely with animations.

Gateron switches are already considered some of the best in the world in terms of price and quality and their popularity is growing especially across PC gamers. That's why Akko bet his cards on these switches, and we have to say he did well. However, it also depends on the personal preference of the customer himself, but we really like these switches. We procured a model with white switches. 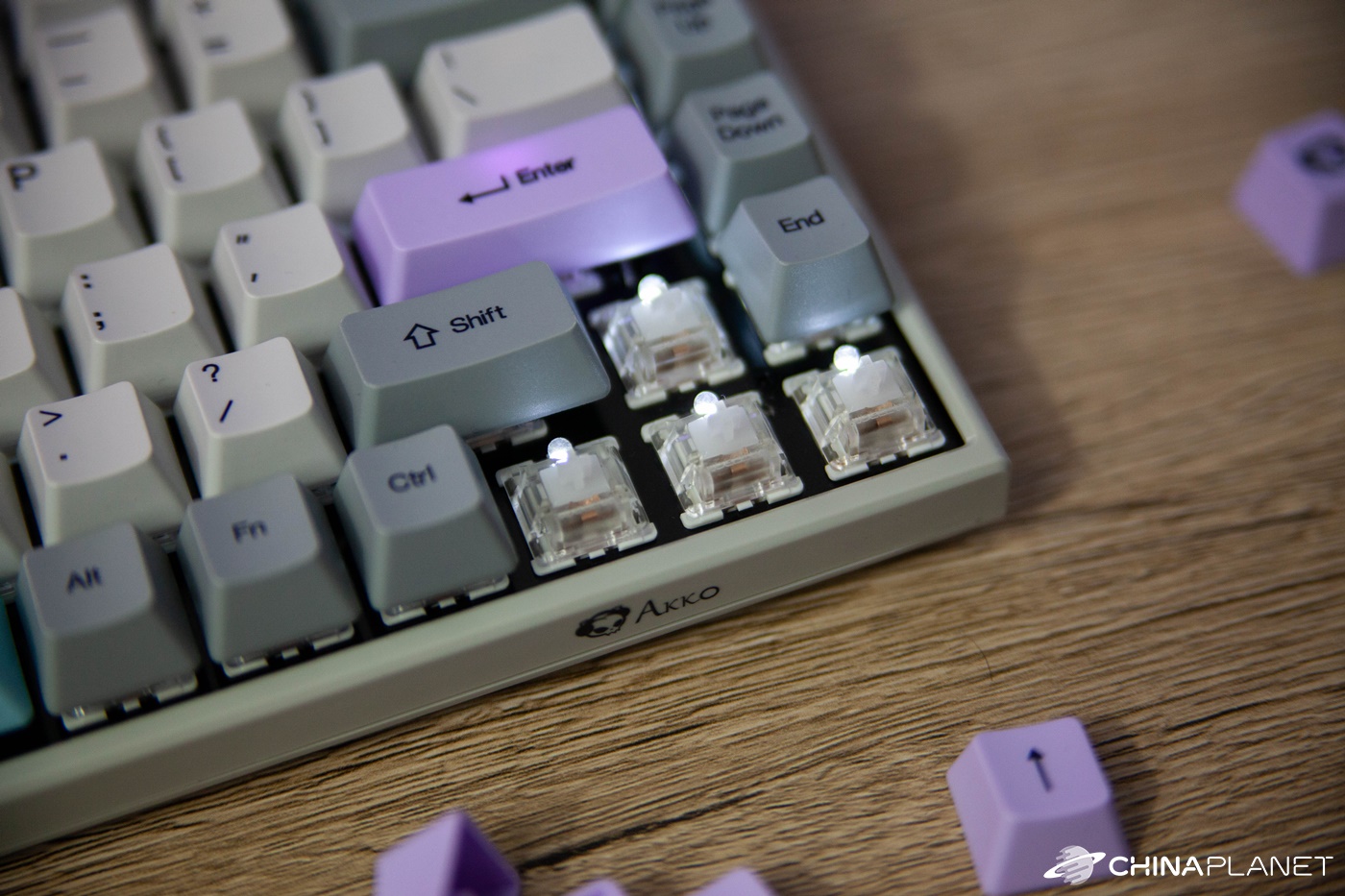 The feeling when writing is nice, but we personally did not write comfortably with the white switches from the beginning and we had to get used to them for a long time. We made a lot of mistakes and accidentally pressed the adjacent keys. After about two weeks, it's better, but we still find the keys too sensitive to touch. 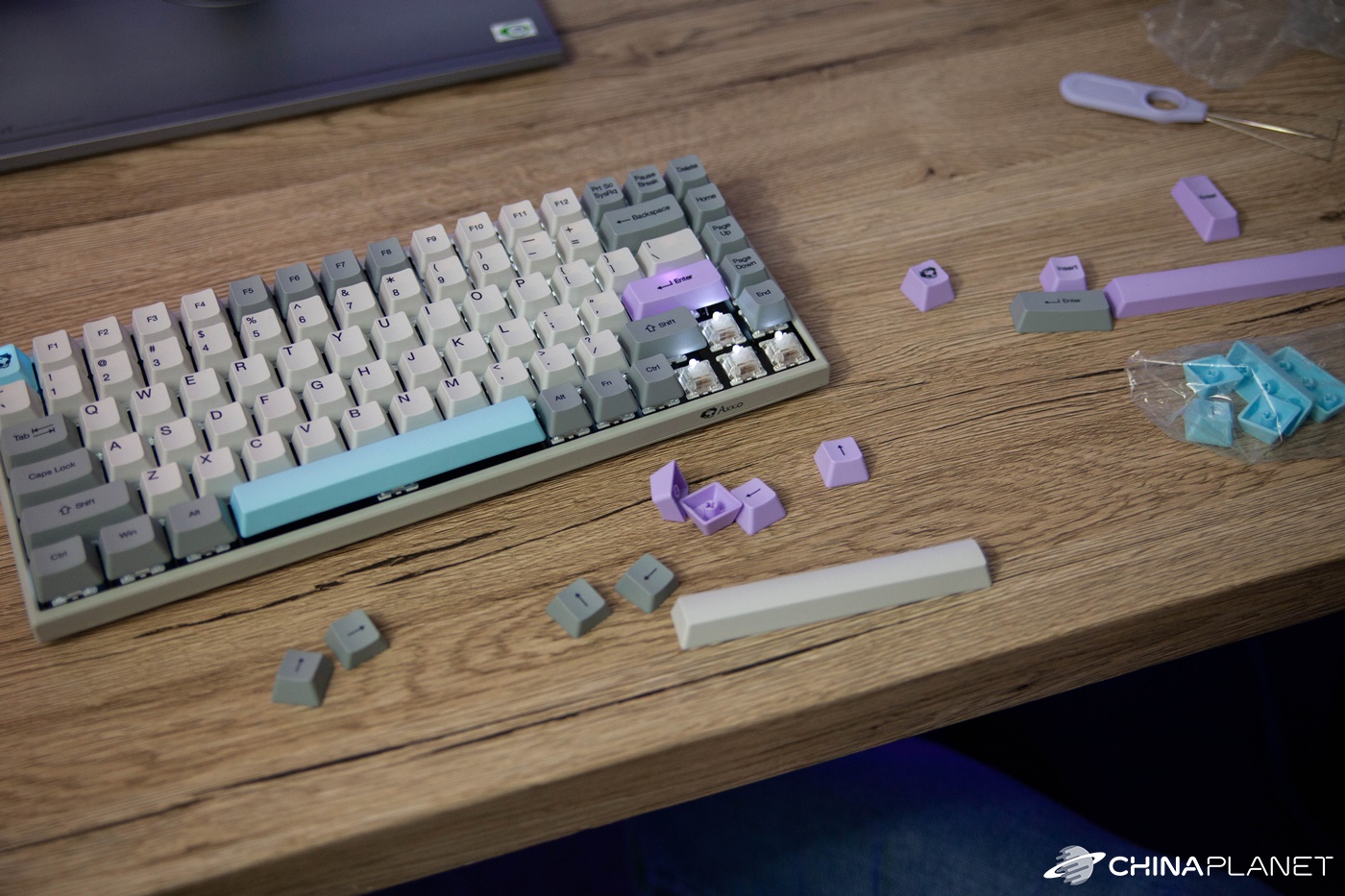 It is almost impossible to describe the sound and feel of individual switches, so listen to how we are told with white switches and what sound they make:

The manufacturer lacks a description of all available switches, and unfortunately the product only has the features of an orange and pink switch. These are as follows:

The great advantage of the Akko 3084 Silent is clearly the connection using a newer standard Bluetooth 5.0, which works really smoothly. It can memorize up to 4 devices, so it will not be necessary to constantly re-pair. This is ensured by Bluetooth profiles, which are switched with the Fn key via the E, R, T and Y keys, resp. on SK layout Z. 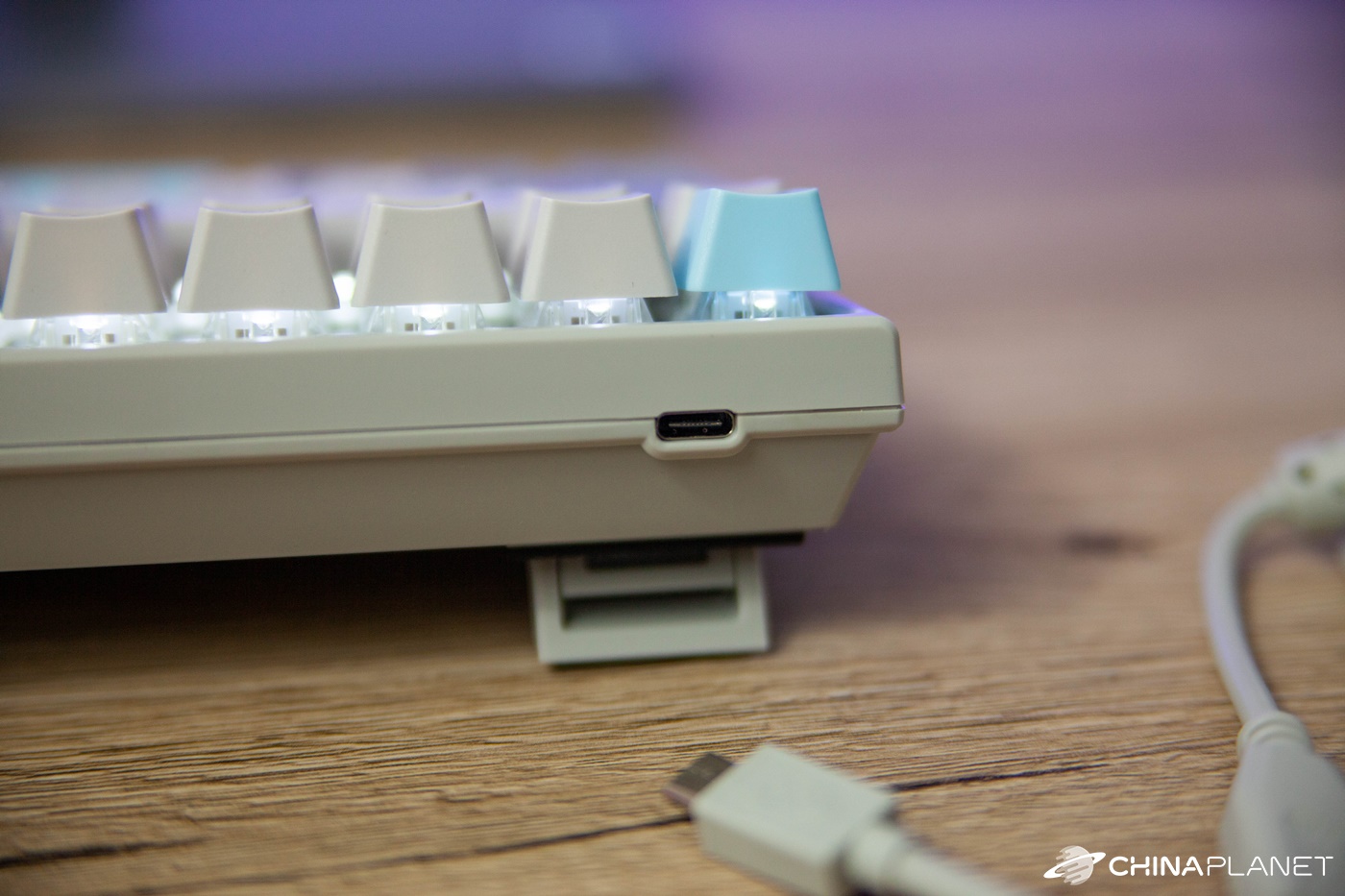 Boomers will certainly appreciate the connection using a cable, via the aforementioned USB-C connector and the included cable. Switching between Bluetooth and wired mode works via the shortcut Fn + Tab. It is located inside 1800 mAh battery that holds continuously for the second week of testing.

If you also have use for macro modes, you will definitely enjoy the native support macro commands keyboard. Again, you will find all the necessary information in the enclosed manual. It is possible to "bind" a combination of multiple keystrokes with the press of a single button. So if you turn on macro mode, for example, by pressing the C key, the keyboard will type the whole word CHINA PLANET. This feature can be used effectively in some games. 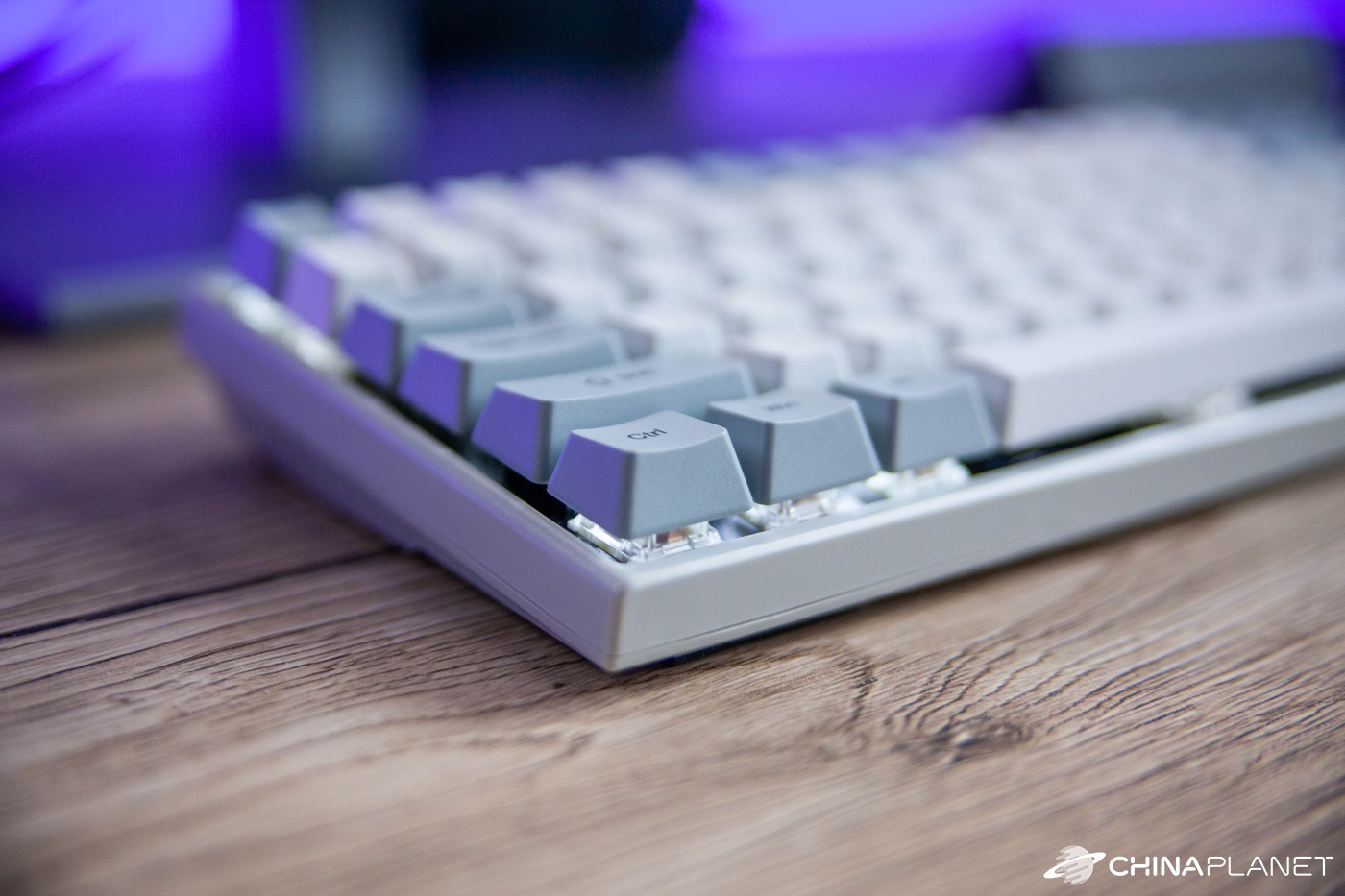 This is how the macro mode control works:

By pressing a shortcut Fn + Win enters macro mode for 3 seconds, Fn + Esc turns on the macro editor, where it is then possible to set individual macro commands. Furthermore, it works by squeezing Fn + "C" and it switches to recording mode. Everything that is now pressed is loaded as a macro command for one of the C keys Fn + "C" the recording of the macro command is switched off again. In this way it is possible to set macro commands for several keys and the macro editor is switched off via a shortcut Fn + Esc. By pressing Fn + Win you will leave the macro mode completely for 3 seconds and return to the original one. 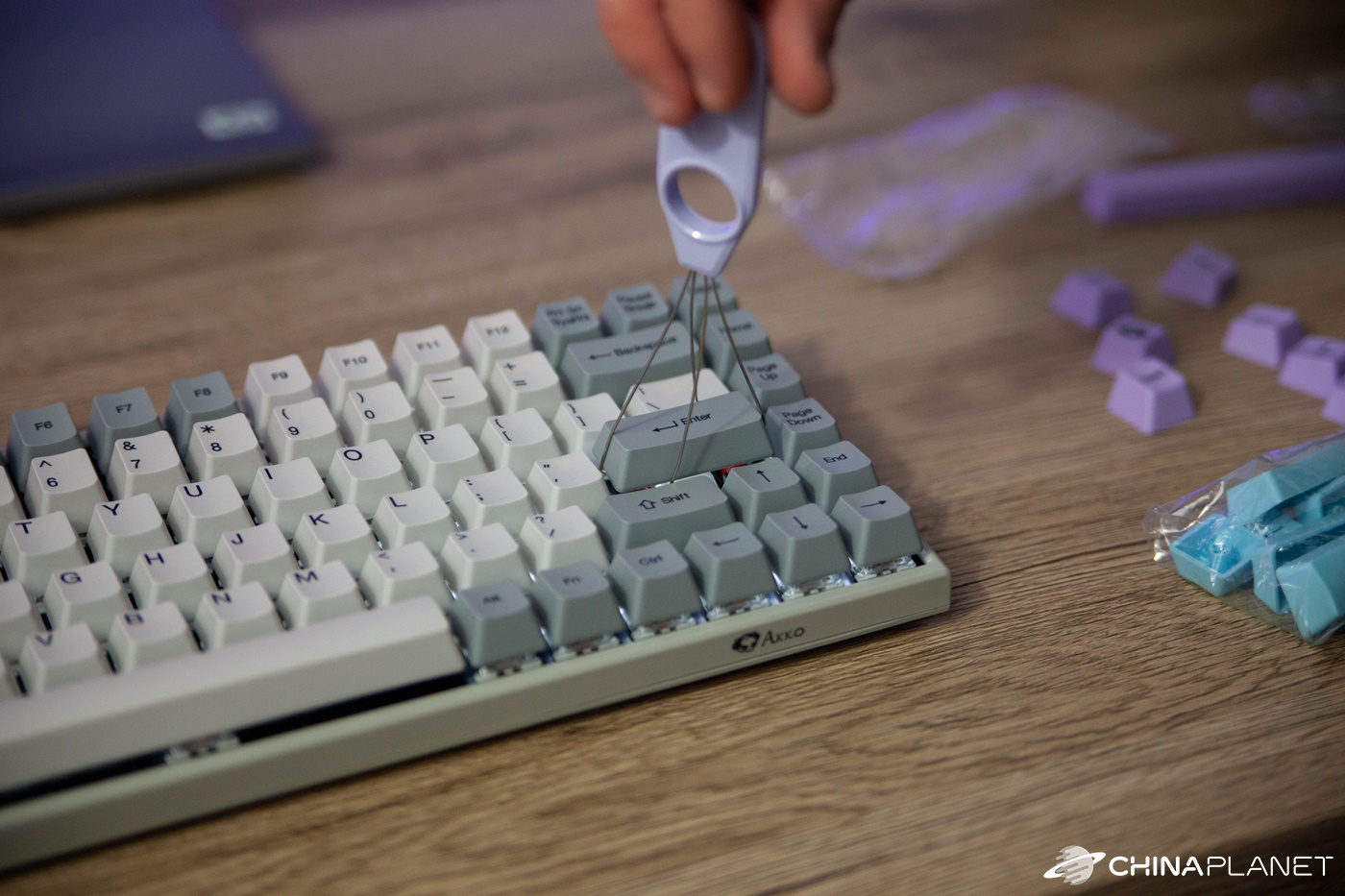 In conclusion, we can really only recommend this keyboard for its price. Many testers have ranked it among the best mechanical keyboards in terms of price and quality, and we join them. If you still catch an offer with a coupon, with Gateron switches, light animations, macro modes, sublimated keys, it's almost a theft. 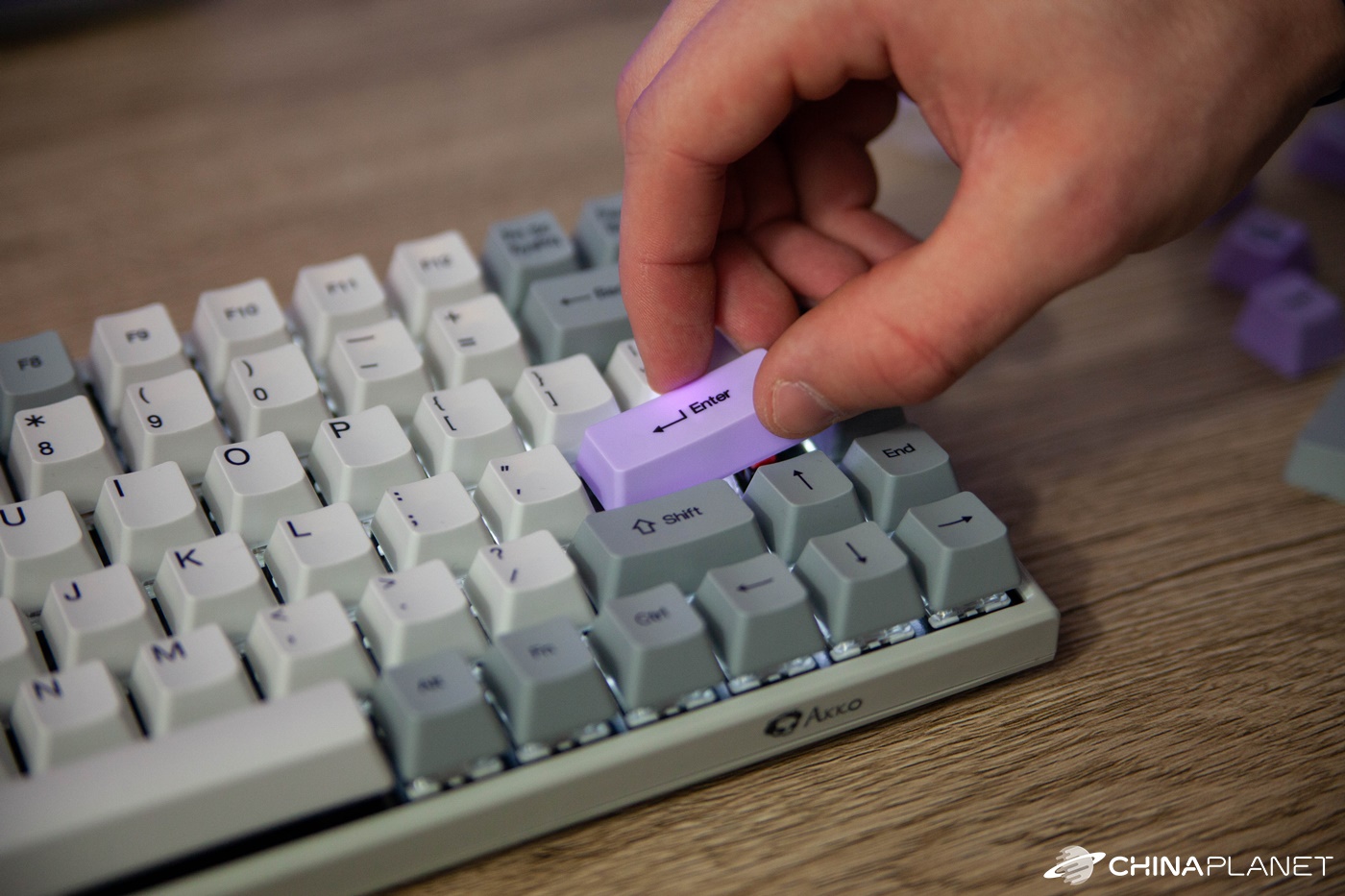 We consider the biggest pluses of this keyboard to be definitely sublimated keys, a nice look and color combination and two sets of alternate colored keys and especially beautiful light animations.

Overall higher position of the keyboard

Introducing the biggest brand of "Chinese lego" Mold King: Amazing kits with high quality not only for children