seamless control with a smartphone

Xiaomi Suzuki Jimny is an RC toy car with smartphone control using Bluetooth technology. This is a very detailed model of the popular Suzuki Jimny in a scale of 1:16. It is controlled by a smartphone and promises a lot of fun not only for the little ones. We have tried this car in the editorial office and now we bring you our experience in the form of a review.

Where to Buy Xiaomi Suzuki Jimny |

You can buy the Xiaomi Suzuki Jimny remote control car from several international retailers. We ordered ours from a popular e-shop Banggood with delivery from the Czech warehouse without any additional fees. 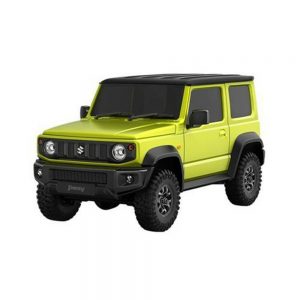 I want it
Are you shopping on Tomtop for the first time? See instructions!

Xiaomi Suzuki Jimny comes in a compact box with photos of the car in the field and basic technical specifications, but only in Chinese. As this car model does not have a global version for the European market, we will not find instructions in English here either. 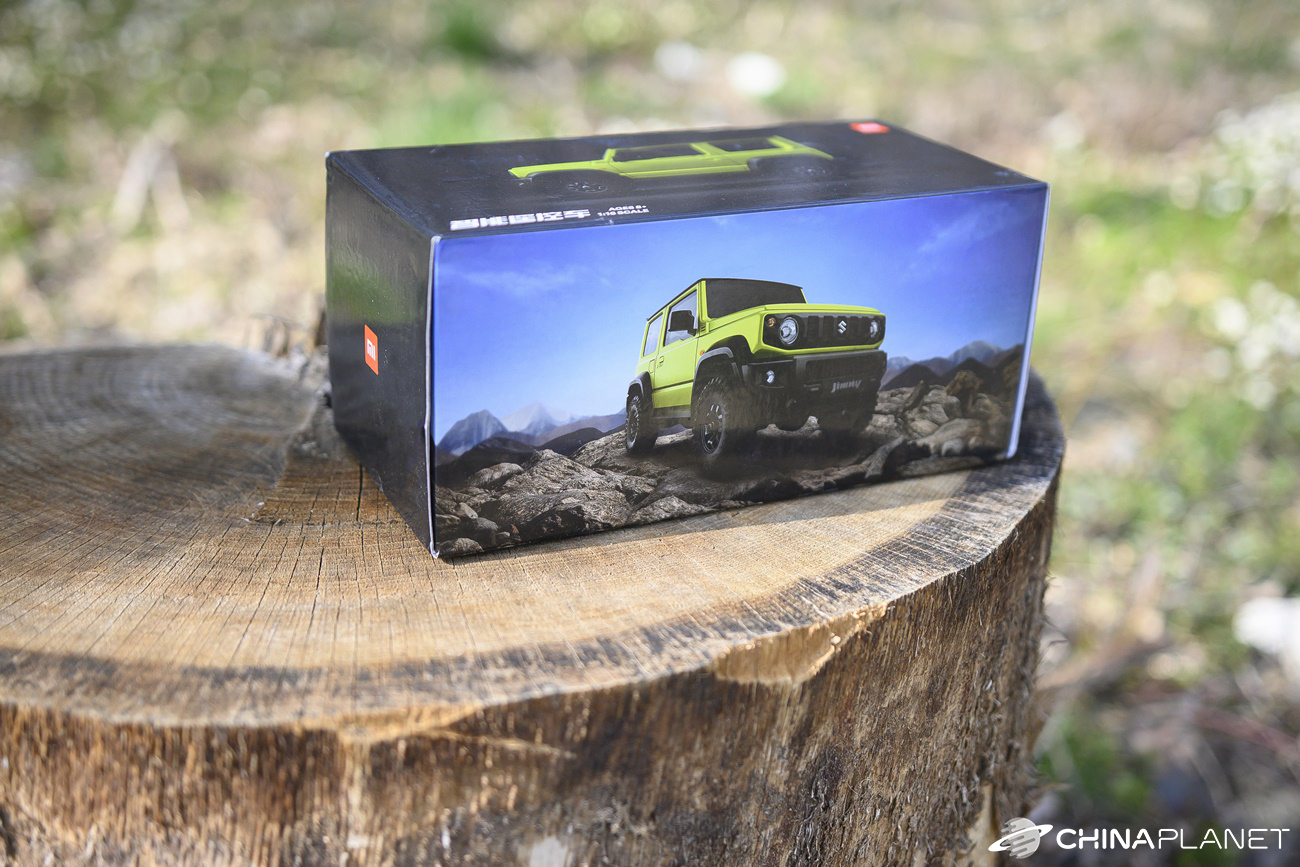 Inside, there is only the car model itself, the charging cable and instructions in Chinese with a series of stickers. The car is placed in a cardboard package and then also in a protective foil, thanks to which it is protected against damage or scratches.

Protective foils are also affixed to the windows of the model, so we have absolutely no objections to packaging and protecting the product against any damage. The product is well packaged. 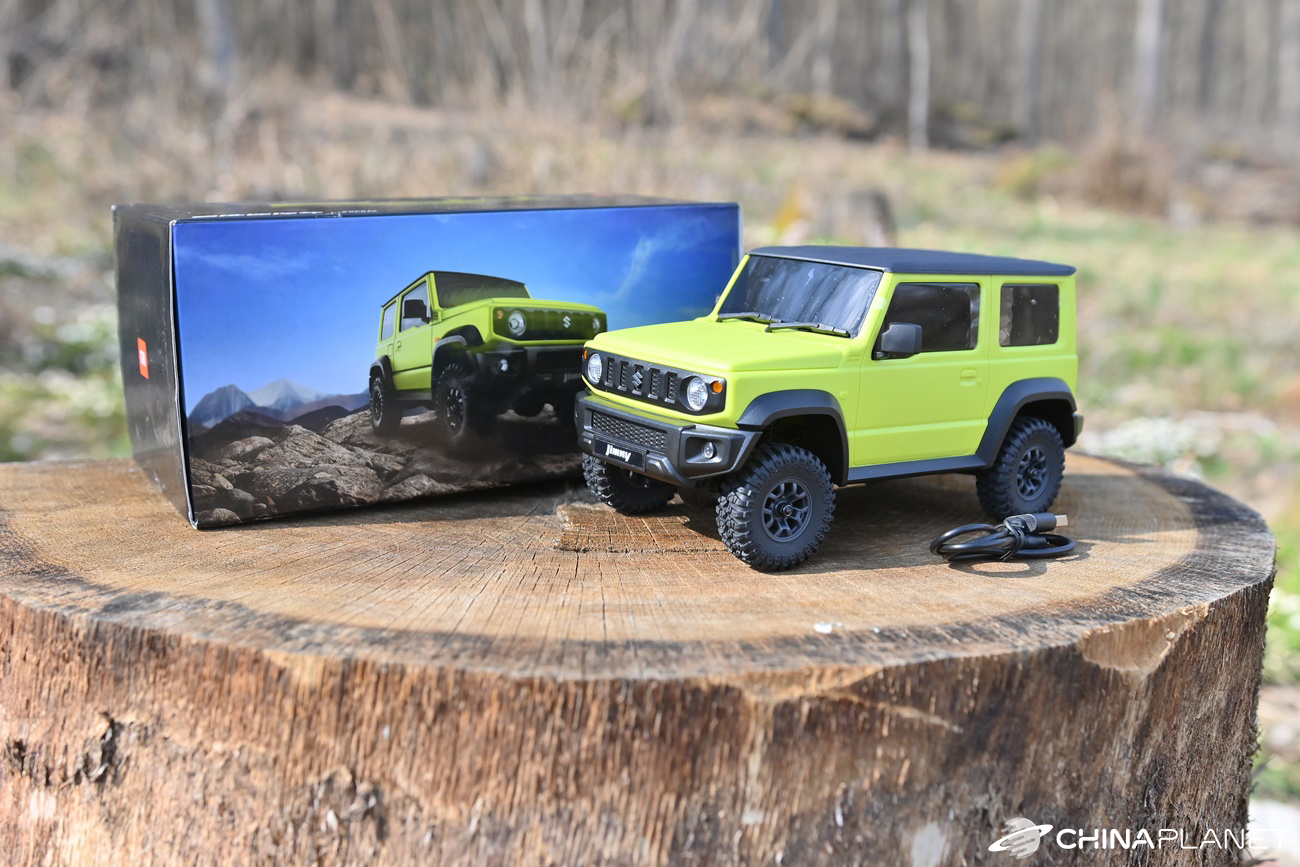 The package does not include a remote control, as it is an intelligent model controlled by an application in a smartphone and Bluetooth technology.

Quality of workmanship and design

Designed with the permission of the Japanese carmaker, this model is a very faithful copy of the real Suzuki Jimny in a scaled-down form. As for the appearance of the body, the model is indistinguishable from its larger original. It is very detailed and at first glance creates an exceptionally high-quality impression. In the following photos you can compare a real car with its model.

The whole model is made of plastic, but there are no cheap plastics that would make a poor impression. On the contrary, everything fits together perfectly. The chassis is also redesigned and offers a 4 × 4 drive with a closed differential, thanks to which the wheels rotate at the same speed at the same time. This feature is one of the key for off-road cars.

The axles leading to the differential are also plastic, but given the light weight of the model of only 350 g, this should not be a problem. Of course, if some stressed parts were aluminum, their service life would be extended.

There is also a high-quality sprung chassis with four shock absorbers. The suspension works well and is complemented by soft tires that copy every obstacle. The car is very well equipped even for difficult terrain. It can therefore be used not only indoors but also outdoors. 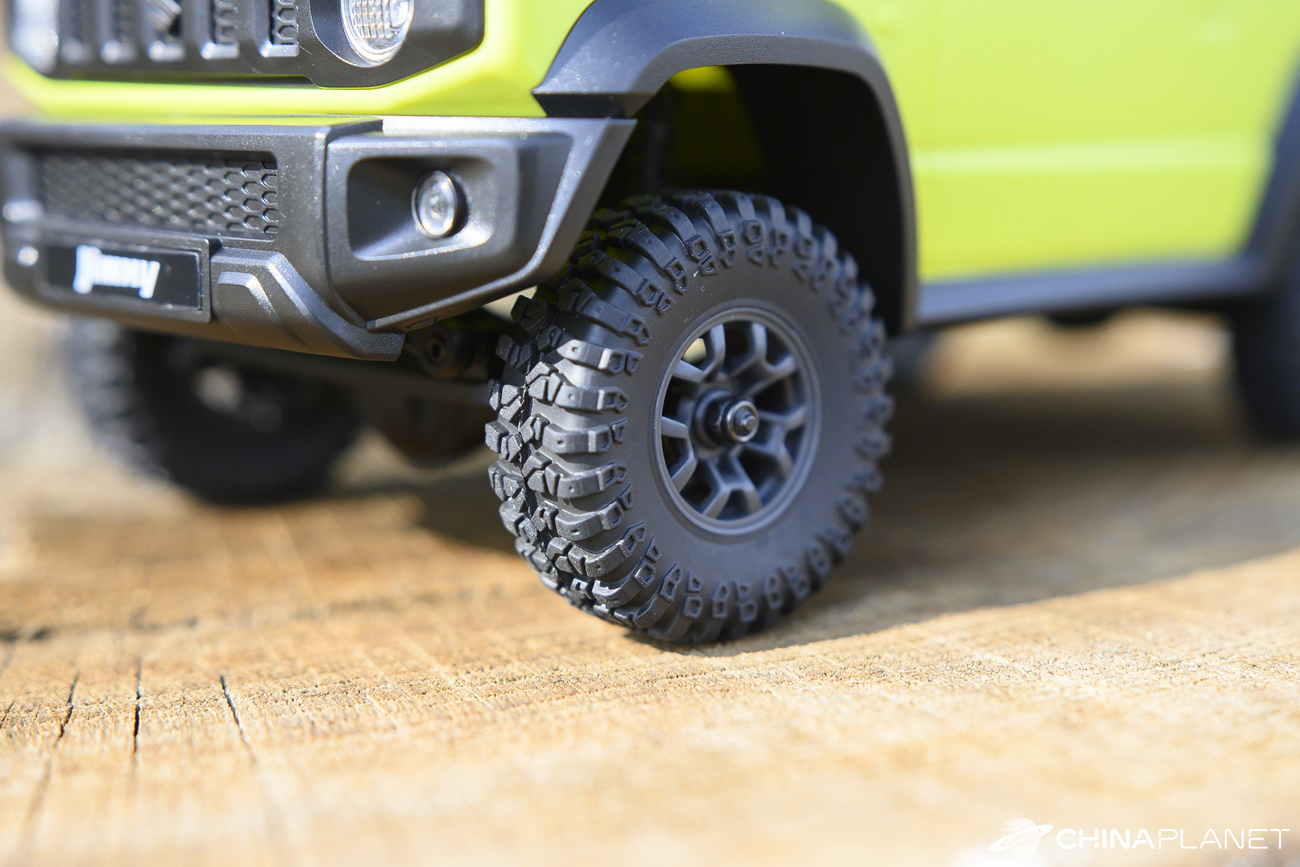 An interesting detail are the rubber rear-view mirrors. Thanks to the use of rubber, they do not break during a possible fall or overturning.

Xiaomi Suzuki Jimny is fastened at the bottom with a round and single button on the entire model. When turned on, its backlight turns blue and the model is ready to pair with the application on the smartphone. The application is available in the Google Play store and is named My Smart RC Car. 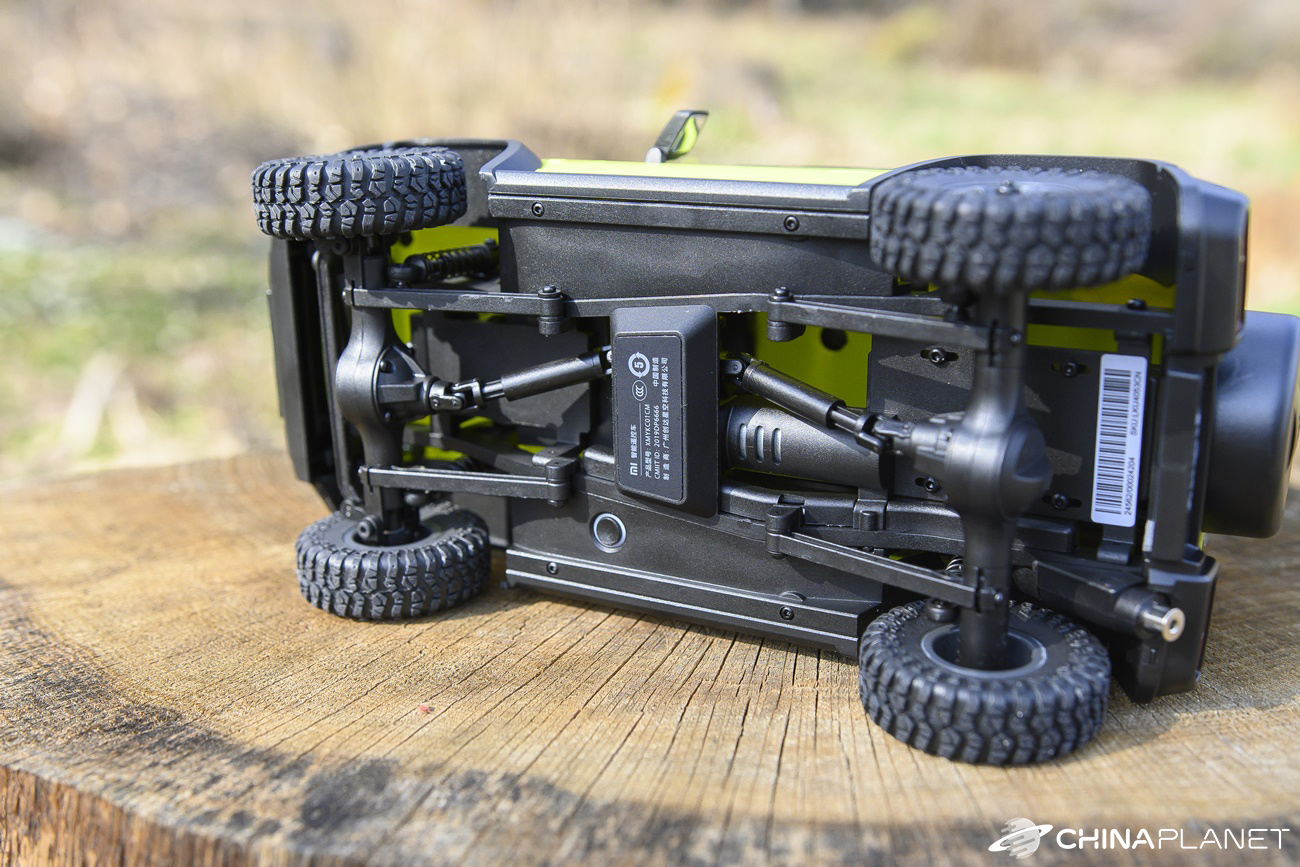 Each time you turn on the application, you need to pair the car via Bluetooth. The application must search for a toy car with its serial number. Subsequent pairing is easy, just click on the searched car and everything will happen automatically.

After a successful pairing, Xiaomi Suzuki Jimny is ready to ride. Here we encountered a small problem - the application was also in Chinese and sometimes it still switches to this language. Thanks to the instructions on YouTube, we found the option to switch the language to English in the application.

The main screen of the application provides all the elements for controlling the car and displaying the battery status. In the left part there is a throttle control (forward and reverse direction) and in the right part there is a steering control (right and left direction).

There are also several settings, such as speed limiter or automatic brake application. If we release our finger from the throttle control in this mode, the car will stop and it will not move further from inertia. The control can also be controlled by tilting the smartphone.

In the settings, in addition to the language, it is possible to change the location of the controls on the main screen, so that for left-handers it is possible to switch the throttle control to the right and the control to the left. Next, you will find a tutorial that will acquaint you with the controls and information about the current version of the application. The application itself is so simple, but it offers everything you need for operation.

The car responds to control from the app immediately, and despite the fact that we were skeptical at first, such control via a smartphone is seamless and we had no problems with range. Since the car measures approx. 235 x 120 x 115 mm until it is sufficiently visible, the signal is good and the connection does not look out at all. Outdoors, the car is barely visible at a distance of 50 m, but the range is still good.

As we mentioned above, the control is very simple and everything works great. Not only children but also adults will have fun with the car. It's a great toy to unwind. 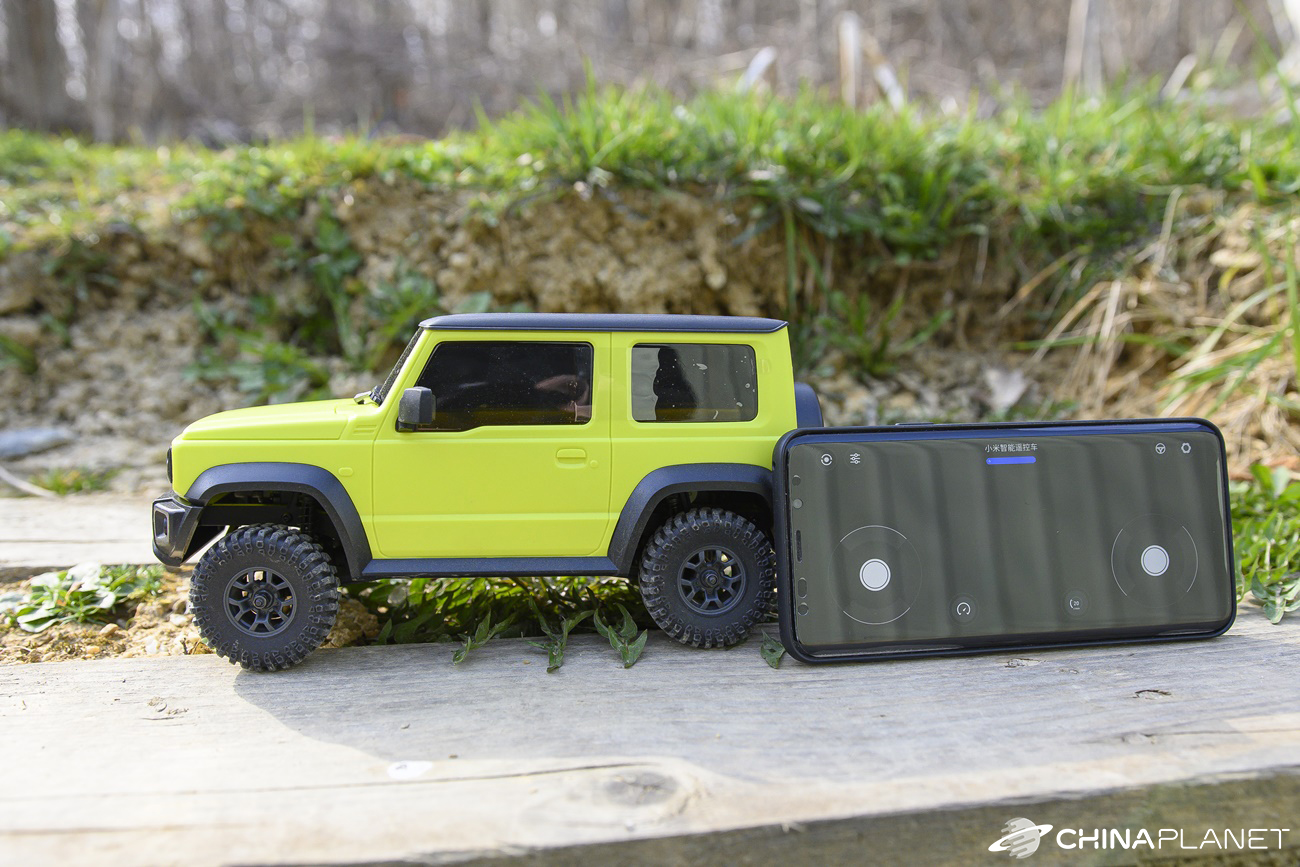 We rode with him mostly indoors, but we tried it several times in nature or in the housing estate. It can easily cope with more difficult forest terrain with obstacles, the problems are only caused by the tall and dense grass, which of course it cannot overcome, as the car itself weighs only 350 grams. 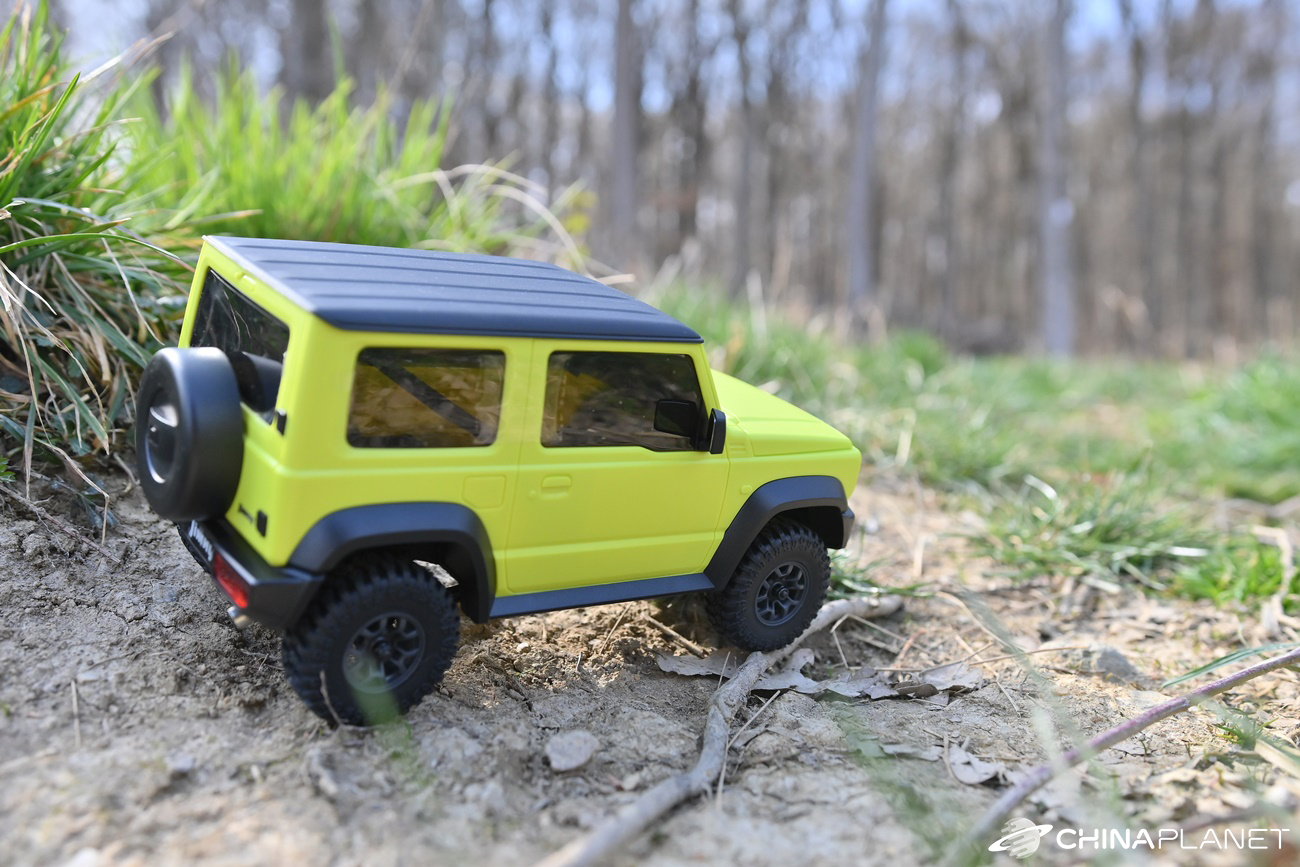 When it comes to control, we prefer touch control and controls on the smartphone screen, but the tilt control of the smartphone is also interesting, which also works perfectly. 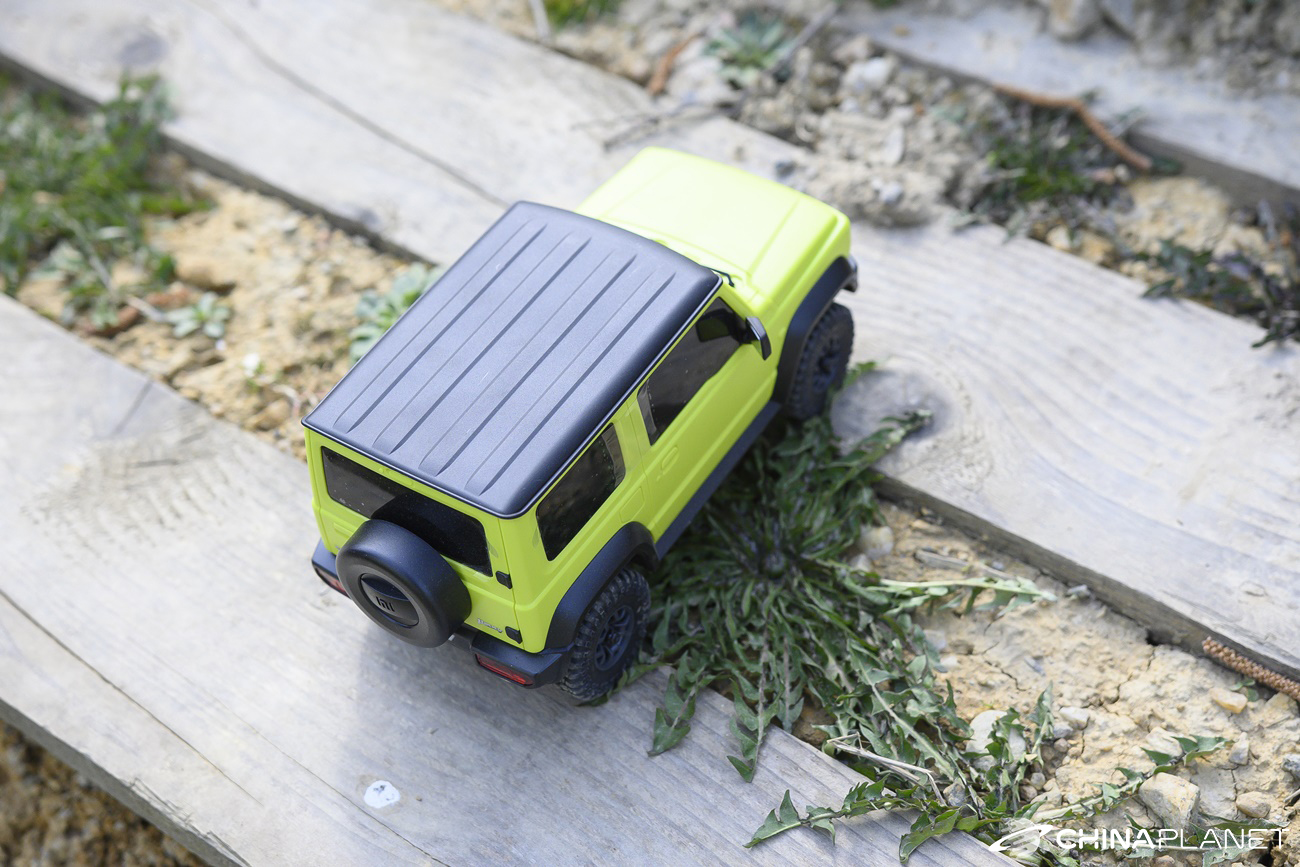 We just lacked lighting here. It is a pity that the manufacturer did not integrate some of the LED diodes into the headlights that would allow the car to be used even in the dark. As for the sound, the car is very quiet and you can only hear the faint sound of the engine accompanied by a slightly squeaky sound.

What's under the hood?

We didn't disassemble the car, but we can see it quite well under the body from the bottom. There is also a photo without a body on the box. Inside, there is only a small, classic motorbike that drives a car model. 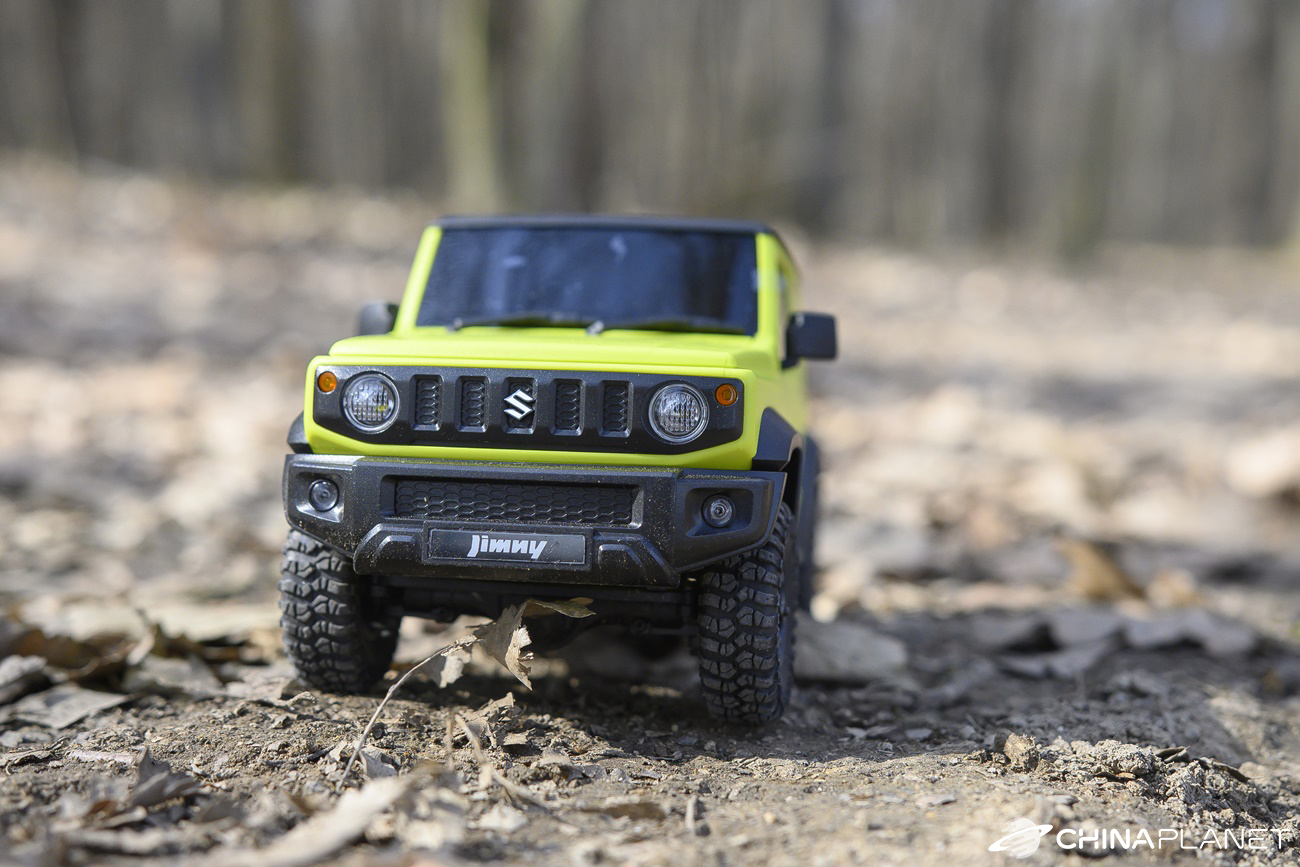 In addition to the main motor, we find a servo motor in the front axle, which takes care of turning the wheels to the sides. Furthermore, there is only the control unit and the Bluetooth module.

The car has an integrated battery with a capacity of 500 mAh. The manufacturer's stated endurance per charge is 30 minutes. We tested the endurance on a slightly sloping lawn, where our car went up an incredible 54 minutes.

From about half the capacity of the battery, the power began to decline and by the end the car was going backwards much slower than with a fully charged battery. Nevertheless, the overall endurance is above expectations. Normally, the endurance of such cars is at the level of 20 - 25 minutes. 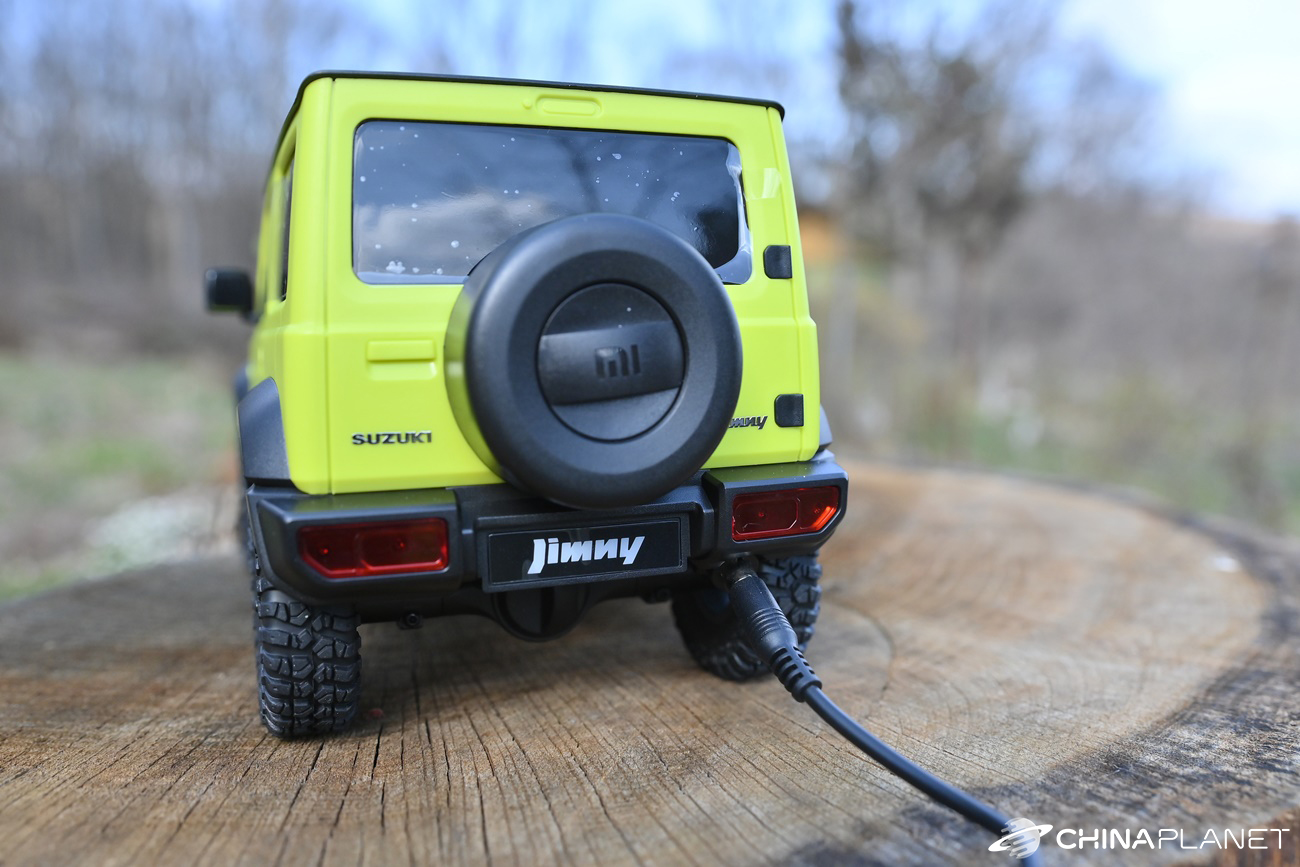 Charging is very interesting. The manufacturer has placed a charging port in the exhaust. However, the package does not include an adapter, but only a USB cable, which you just need to connect to a computer, power bank or any adapter from the charger to the smartphone. Charging takes approximately 1 hour.

Xiaomi Suzuki Jimny is a great toy for all ages. We especially appreciate the good driving characteristics and high-quality, sophisticated suspension. 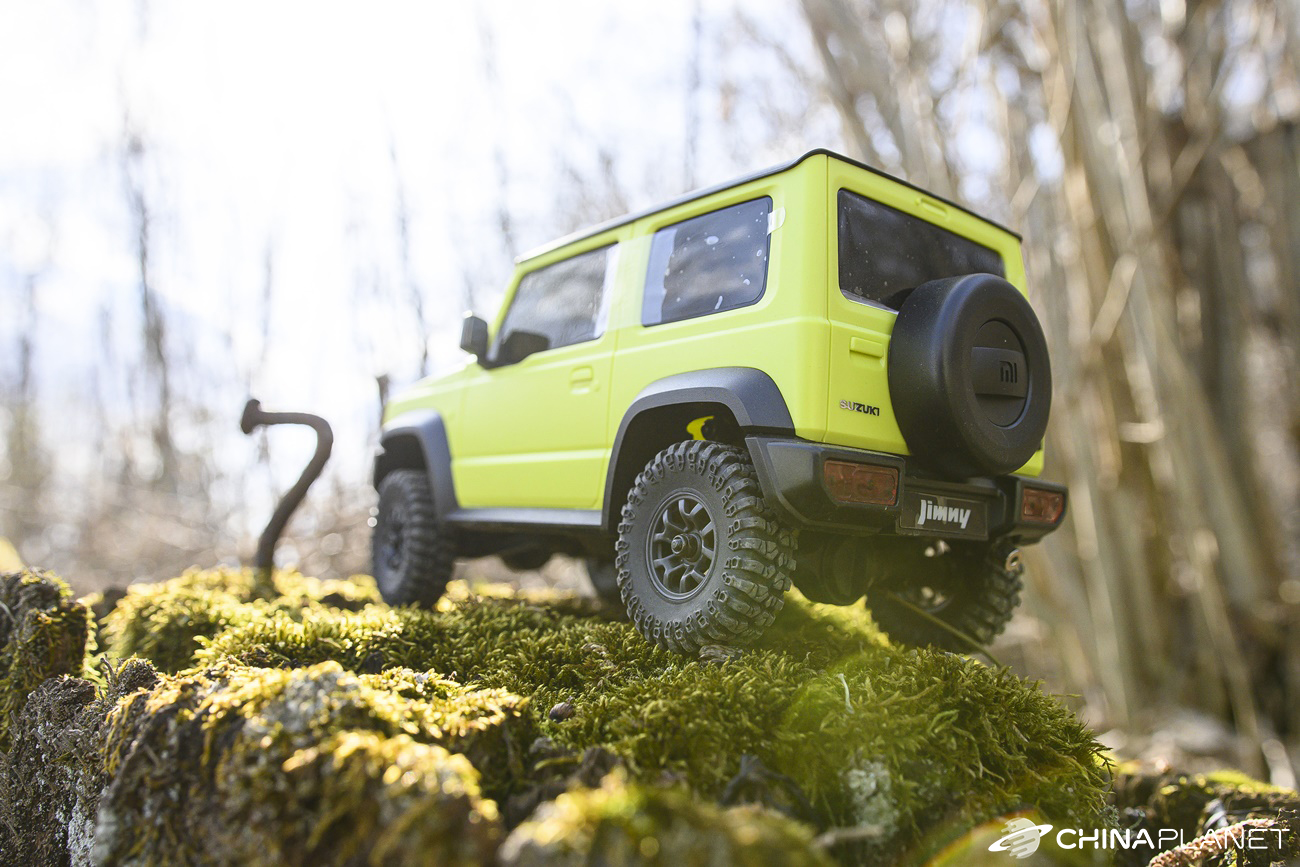 The positive is also the integrated battery, which is charged efficiently in the car, through the charging port hidden in the exhaust. Since the car is controlled by a smartphone, you do not need to carry any remote control with you. Just install the app, pair the car and you can drive.

I want it
Are you shopping on Tomtop for the first time? See instructions!

We see the negative in the absence of any lighting that would allow operation even in the dark.

Crypto Planet is our new project on cryptocurrencies. Bitcoin, altcoins and trading in one place