the screws need to be glued

Basic model of a scooter Kugoo S1 immediately after the performance, he was particularly impressed by the low price, which made electric scooters more accessible to the general public. However, due to several shortcomings, this scooter was damned by many. This time her successor comes in the form of a scooter Kugoo S1 Plus, which promises to remedy the main shortcomings of the older version.

The manufacturer has succeeded in improving and eliminating the tipping system annoying rumble during the ride? Read our detailed review.

Where to buy Kugoo S1 Plus?

Brand scooters Kugoo are sold at the international dealer of this brand - Geekbuying. Its price is still below €300, which absolutely beats most other electric scooters on the market. 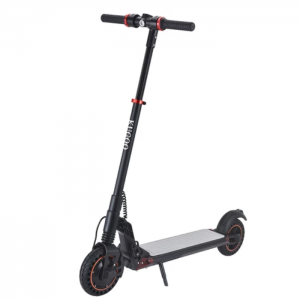 Also pleased with availability in European stock, so you don't have to wait long for a scooter. It will be delivered to you by courier without any fees directly to your home without the need to pay VAT and customs duties.

Packaging and its contents

Electric scooter Kugoo The S1 Plus comes in a black box with a print, which is still inside another, protective box covered with foil. Inside is the scooter itself, which is immediately ready to ride.

It is only folded in the box, as you can fold it whenever you need to carry it by hand. This eliminates any additional assembly of parts. All you have to do is remove the scooter from the box, slide the handlebars into place and lift the entire steering rod to the vertical position. 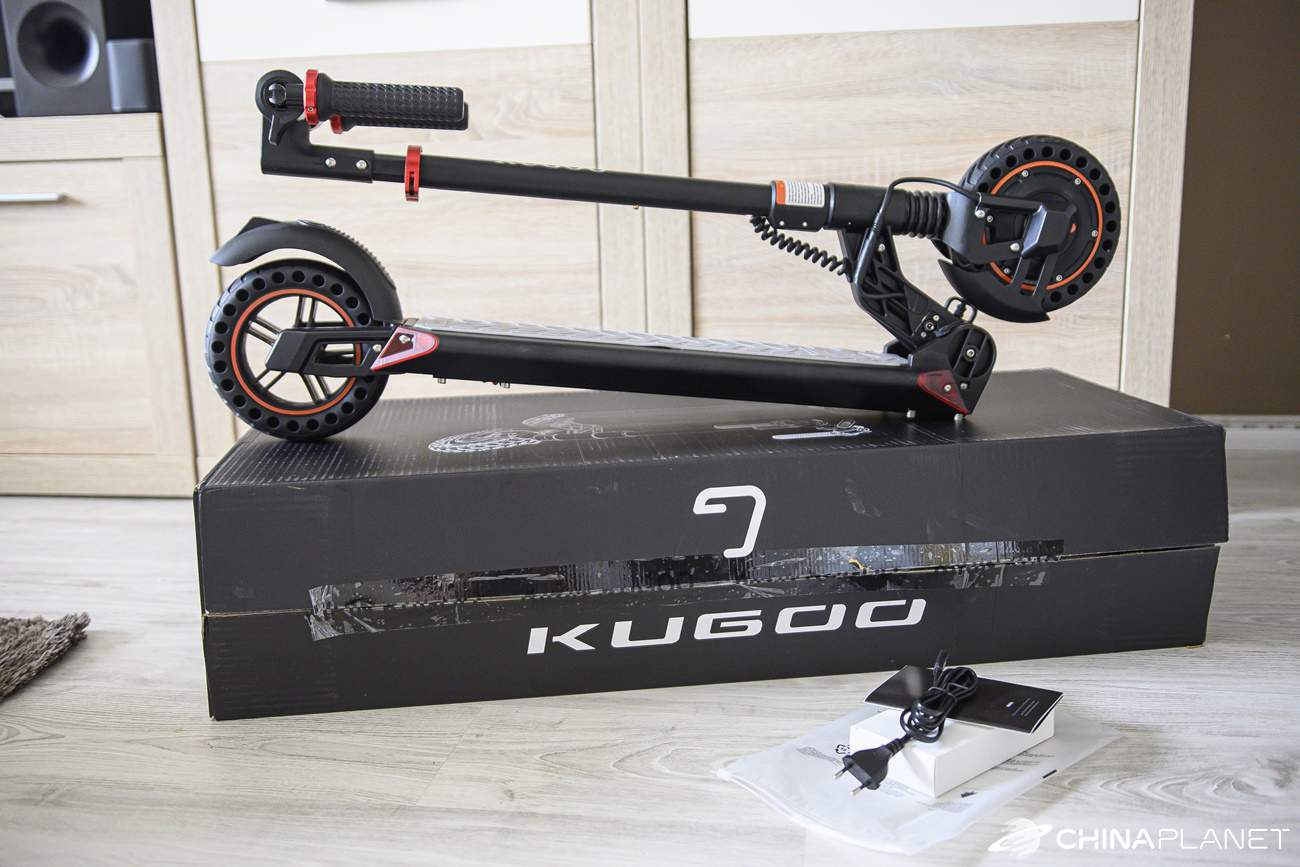 Therefore, there are no screws or wrenches required for assembly in the package, which is a shame because not all screws have been tightened sufficiently. Apart from the scooter, you will only find brief instructions and a charger here. The packaging is very simple and contains only a complete base. At least the presence of spare screws would be pleased.

Quality of workmanship and construction

At first glance, the entire construction of the scooter looks very powerful and firm. Its total weight is 12,5 kg, which is slightly less compared to its main competitor in the form of a scooter from Xiaomi. Most parts are made of metal or solid plastics, which also work well. 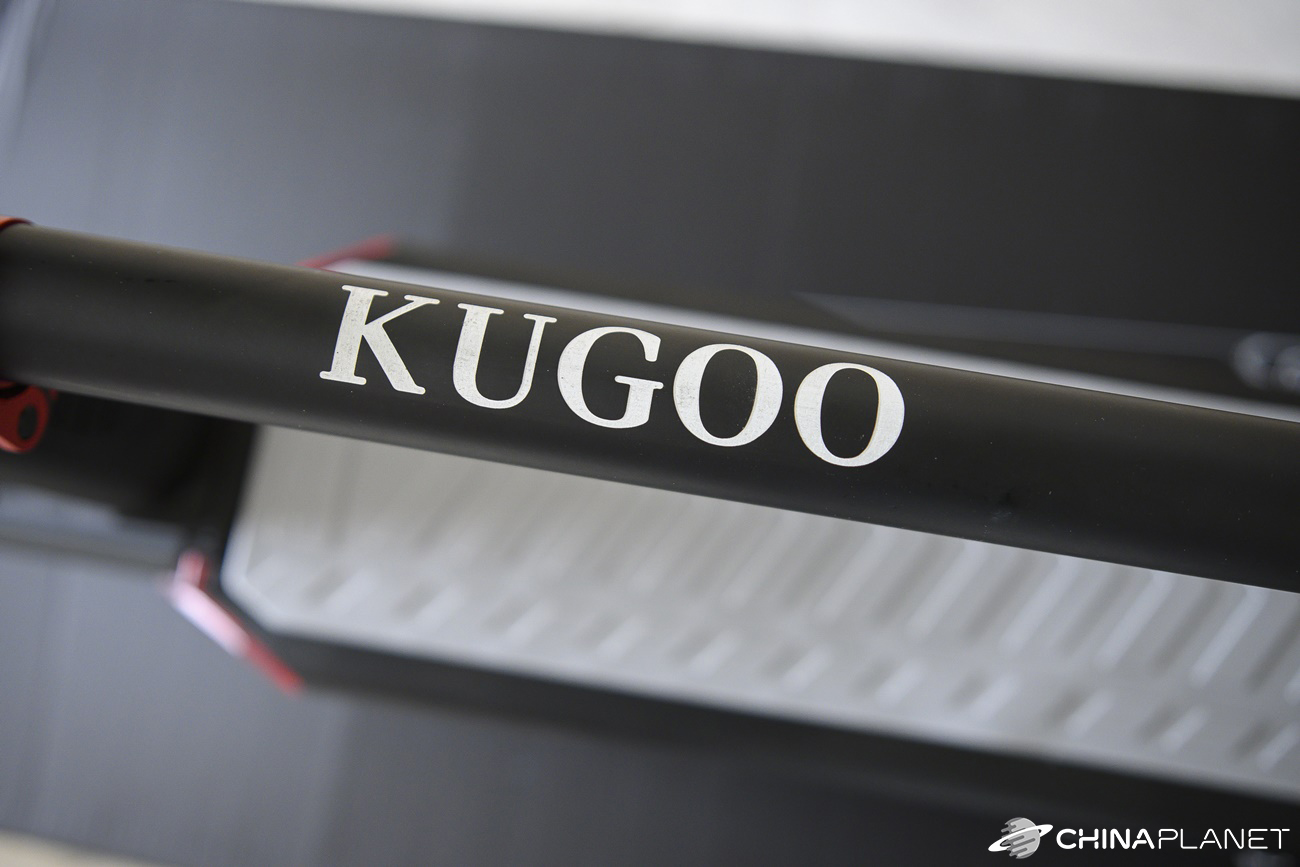 The foot area is approximately 53 x 15.5 cm, which is quite sufficient. It is coated with a gray rubber, on which, however, dirt is immediately visible, but thanks to the material used, it provides a sufficient grip and the shoes do not slip on it. However, this rubber is not glued very well. 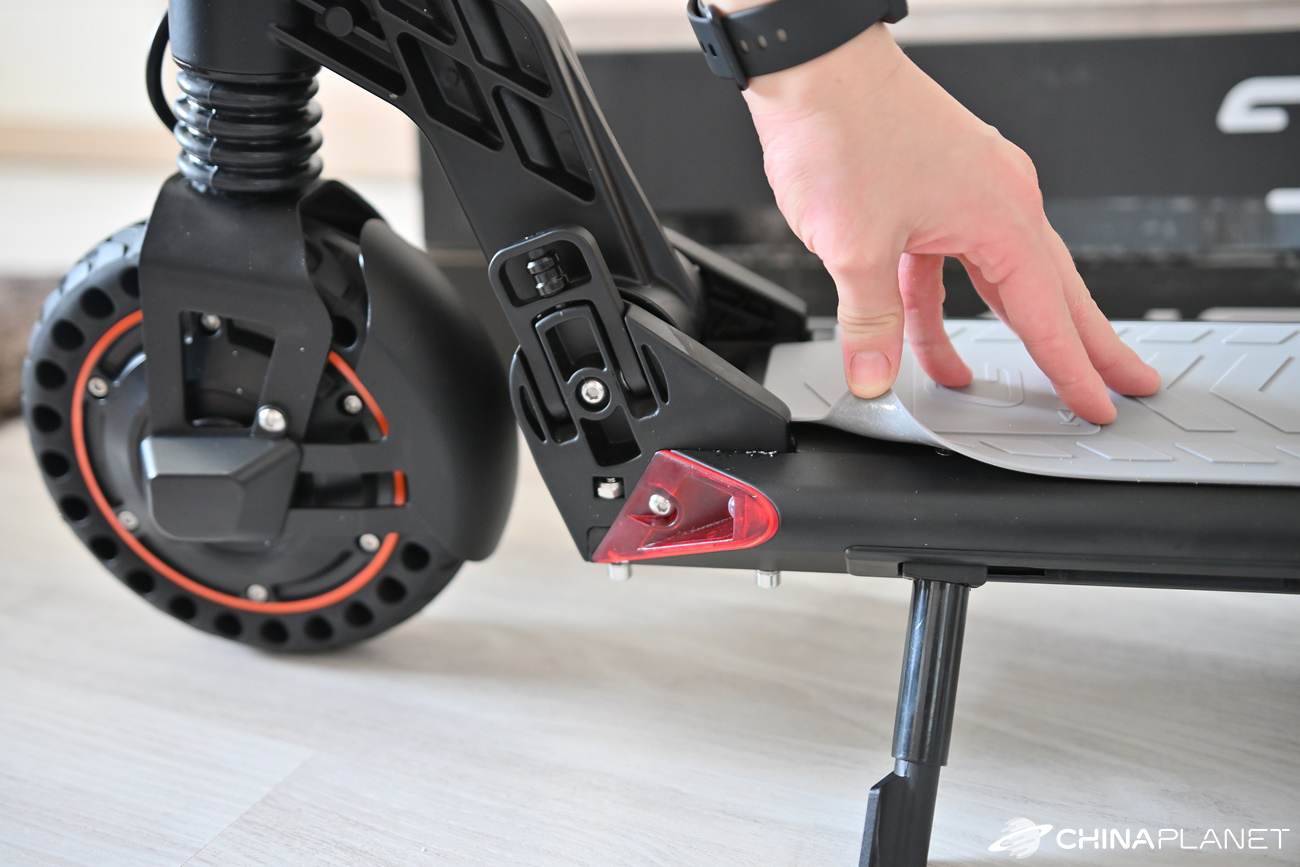 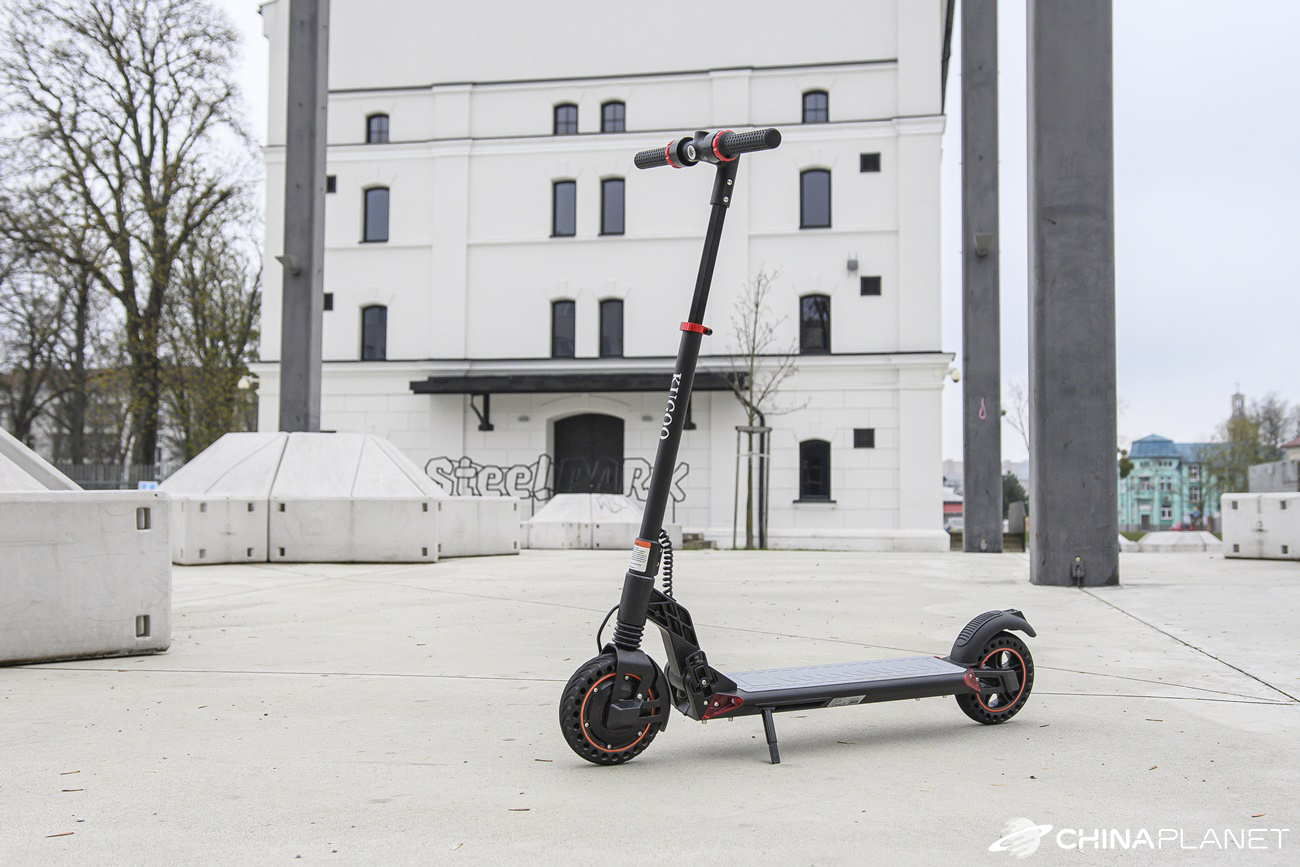 The manufacturer states a maximum load capacity of up to 120 kg. The wheels have a diameter 8" and are solid, rubber with holes around the perimeter. These tubeless tires are stiff to the touch, but we don't have to worry about any defects while driving. 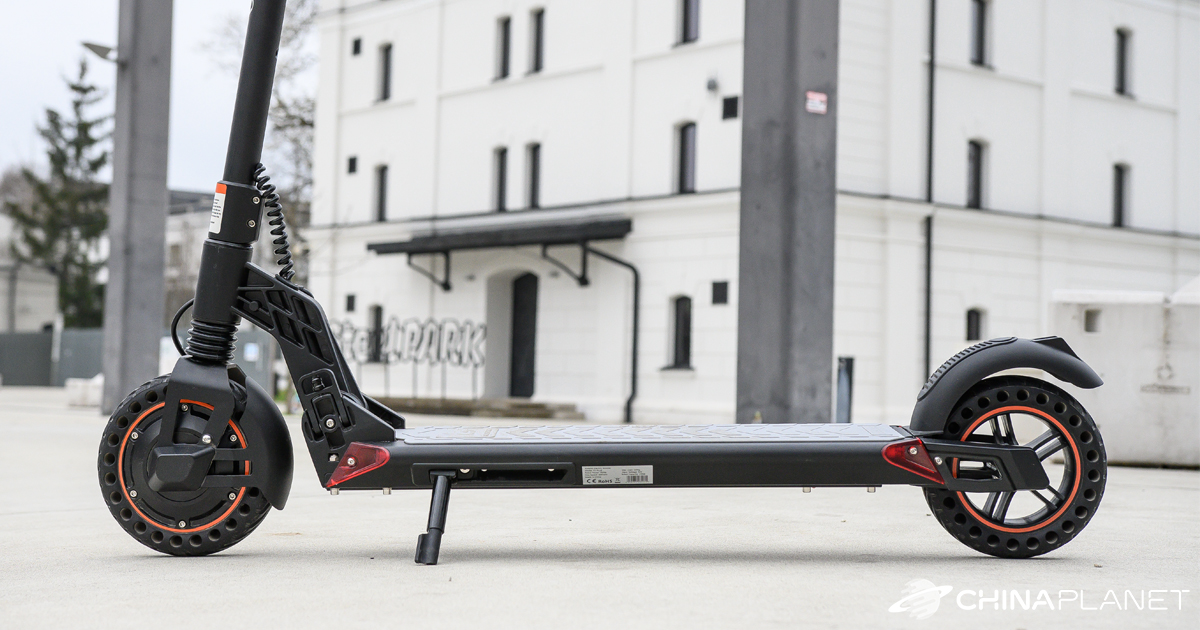 Since the scooter has solid (tubeless) rubber tires, it was necessary to spring it for comfort while riding. At the rear at the bottom you can see a classic shock absorber with a spring and at the front the spring is hidden under the cover. 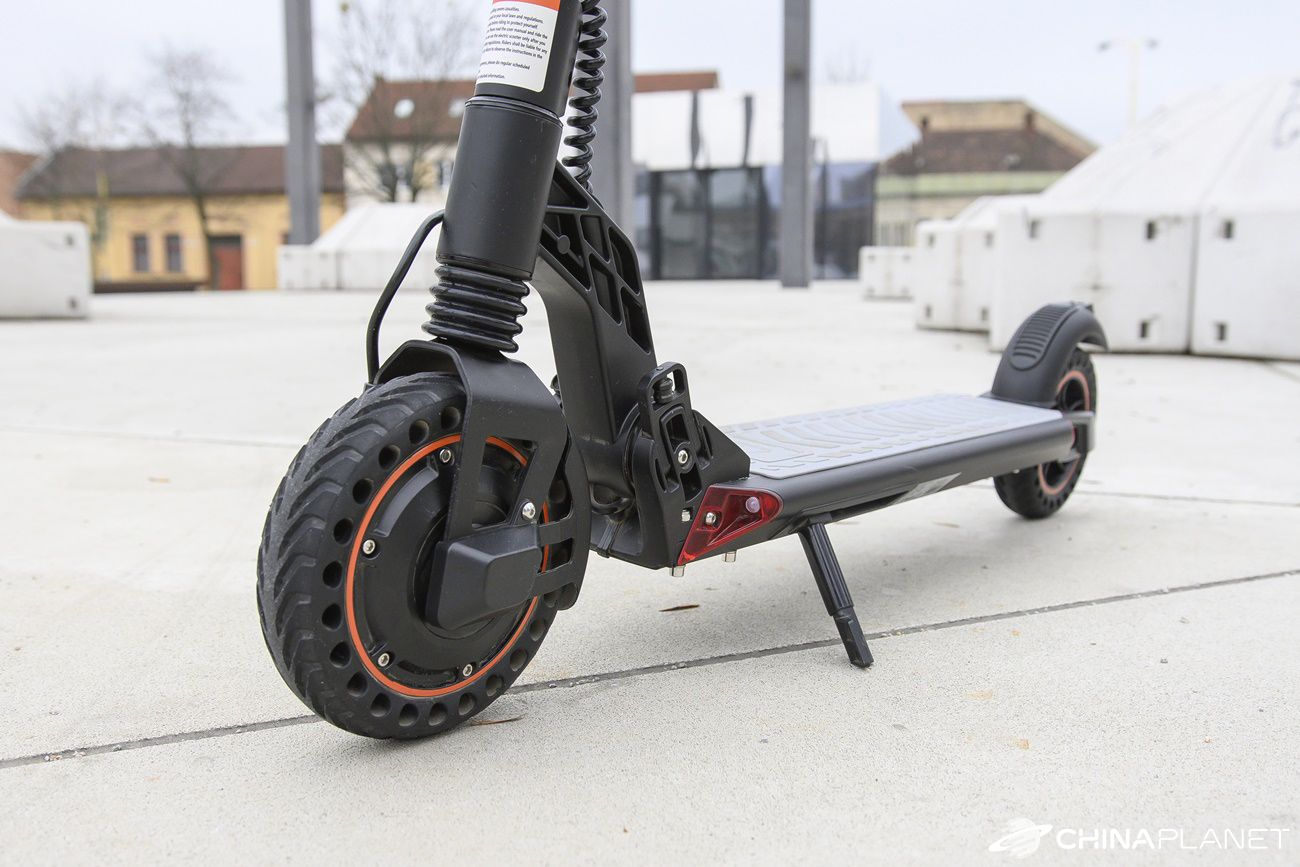 We must recognize that springing works really surprisingly well. When passing through unevenness, the scooter is not completely silent and there are shocks and sometimes a slight banging, but the unevenness dampens very well.

Compared to the classic Xiaomi scooter, which has no suspension but has inner tubes, riding the scooter is Kugoo S1 Plus more comfortable. 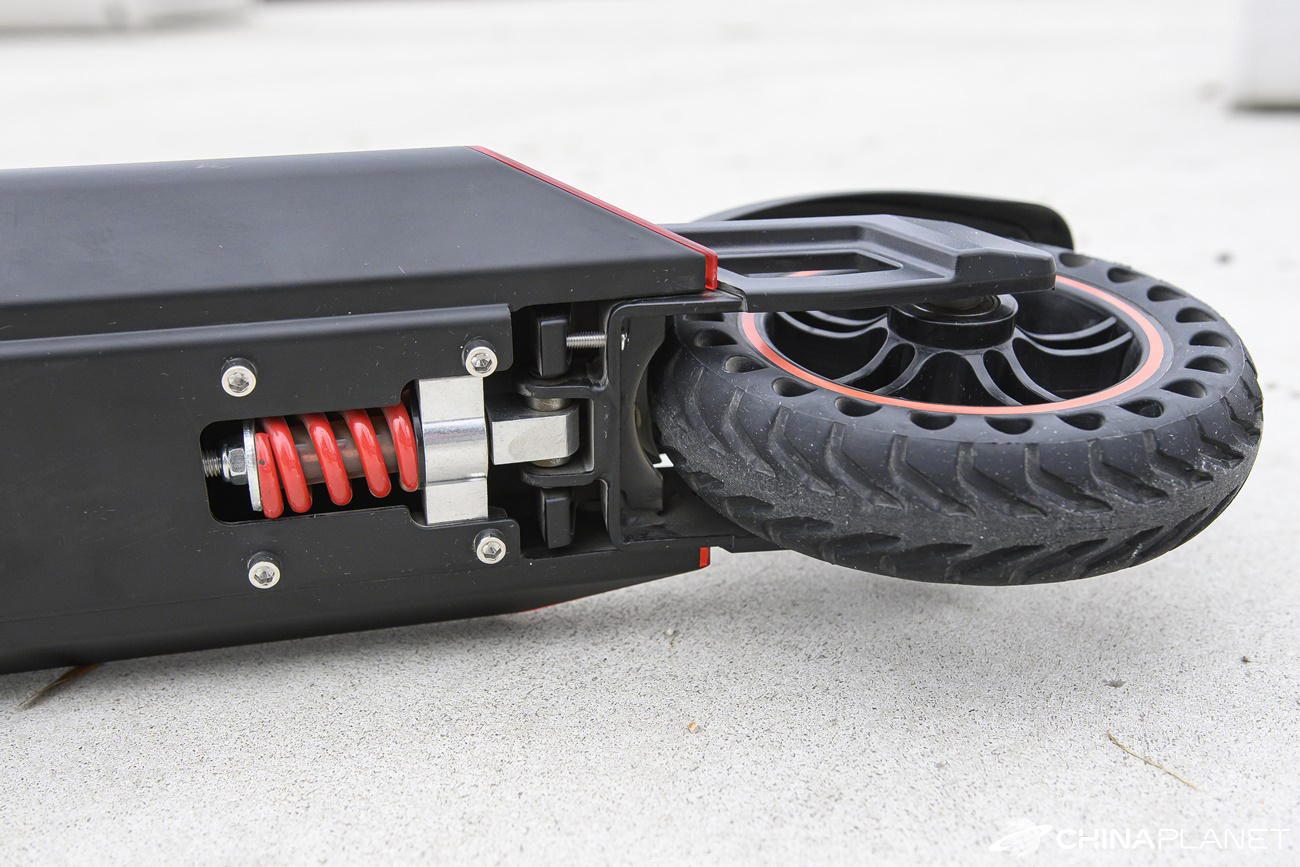 But there is one problem that the manufacturer has not solved. While driving, loosen the screws that secure the handlebars to the telescopic rod. Although we finished all the deeds before the first run, we still managed to lose one of them during the first, hour-long test drive. 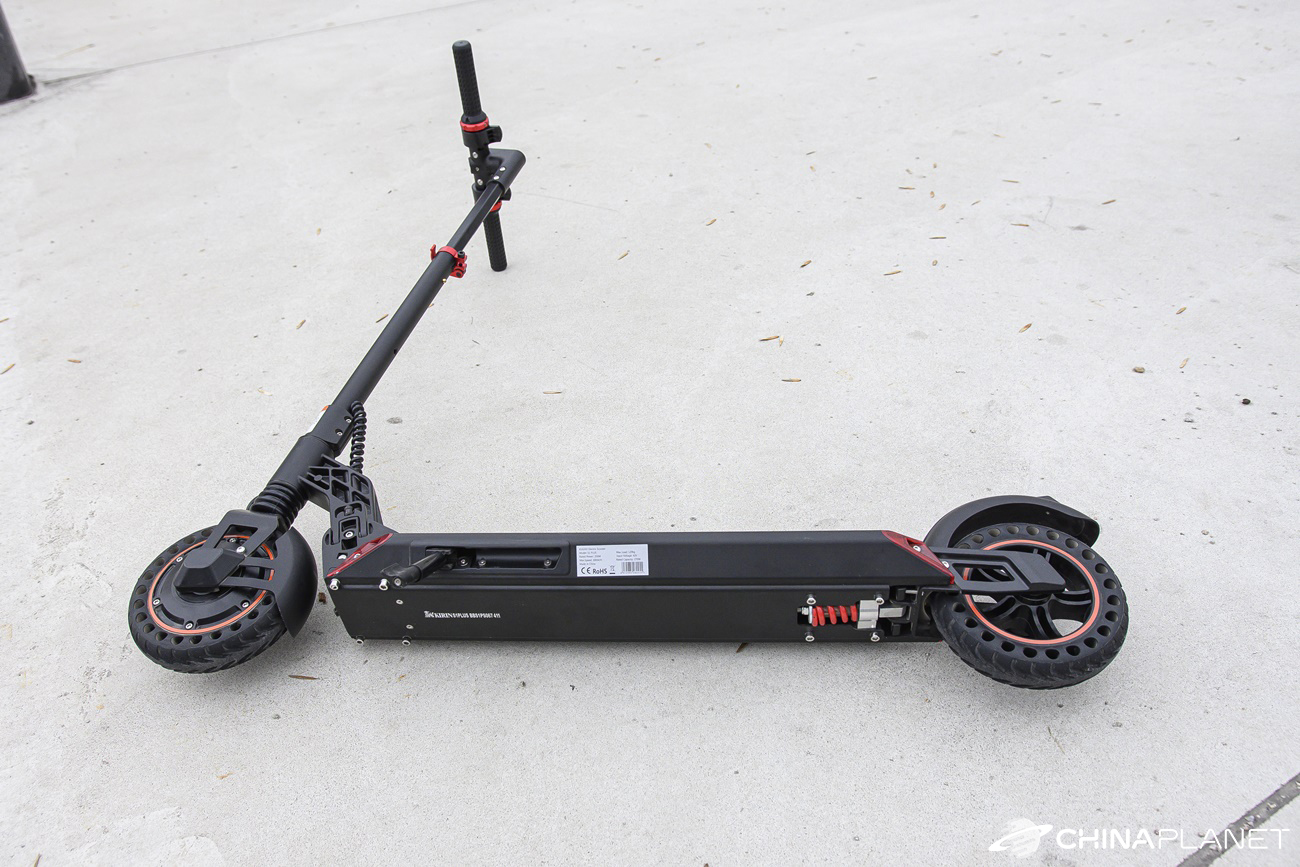 It freezes the absence of spare screws, because finding exactly the same in local stores can be a problem. We recommend gluing these screws to the threads before the first ride.

One of the unpleasant problems of the first version of the scooter Kugoo The S1 was a folding mechanism that many needed a hammer to use to fold the scooter. Later, a grif came up with how to handle it with the scooter hitting a solid obstacle, but it was still not ideal. The folding mechanism was thus really handled unhappily.

Kugoo But the S1 Plus brings a completely different and finally functional mechanism for folding the scooter. There is a plastic clip on the side, which just needs to be lifted together with a small safety lock, and we can fold the scooter beautifully without any problems. The buckle is large enough and easy to work with. 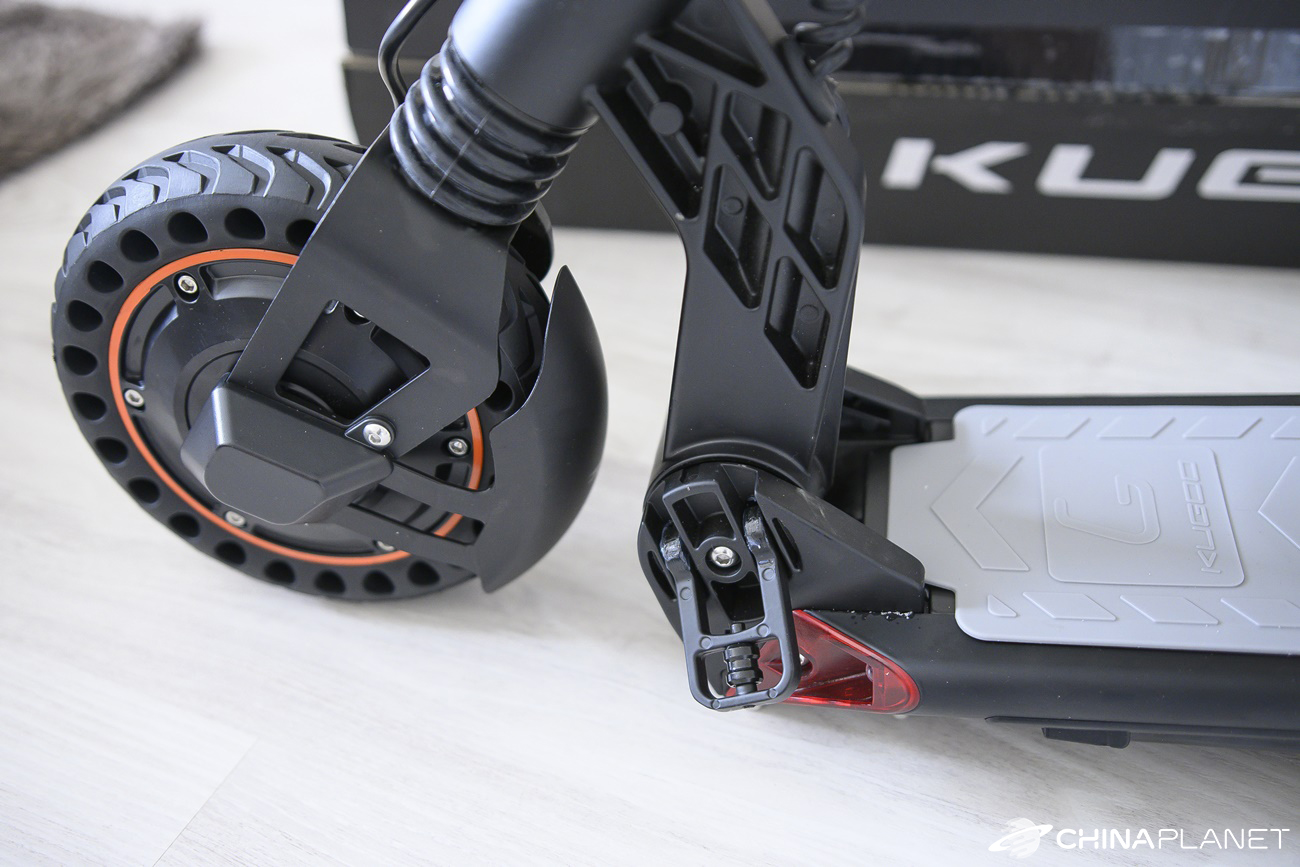 The handlebars also fold down, which must be unlocked by turning the red locks next to the throttle and brake control levers. Once unlocked, they are pulled out of position and can be folded parallel to the telescopic rod. 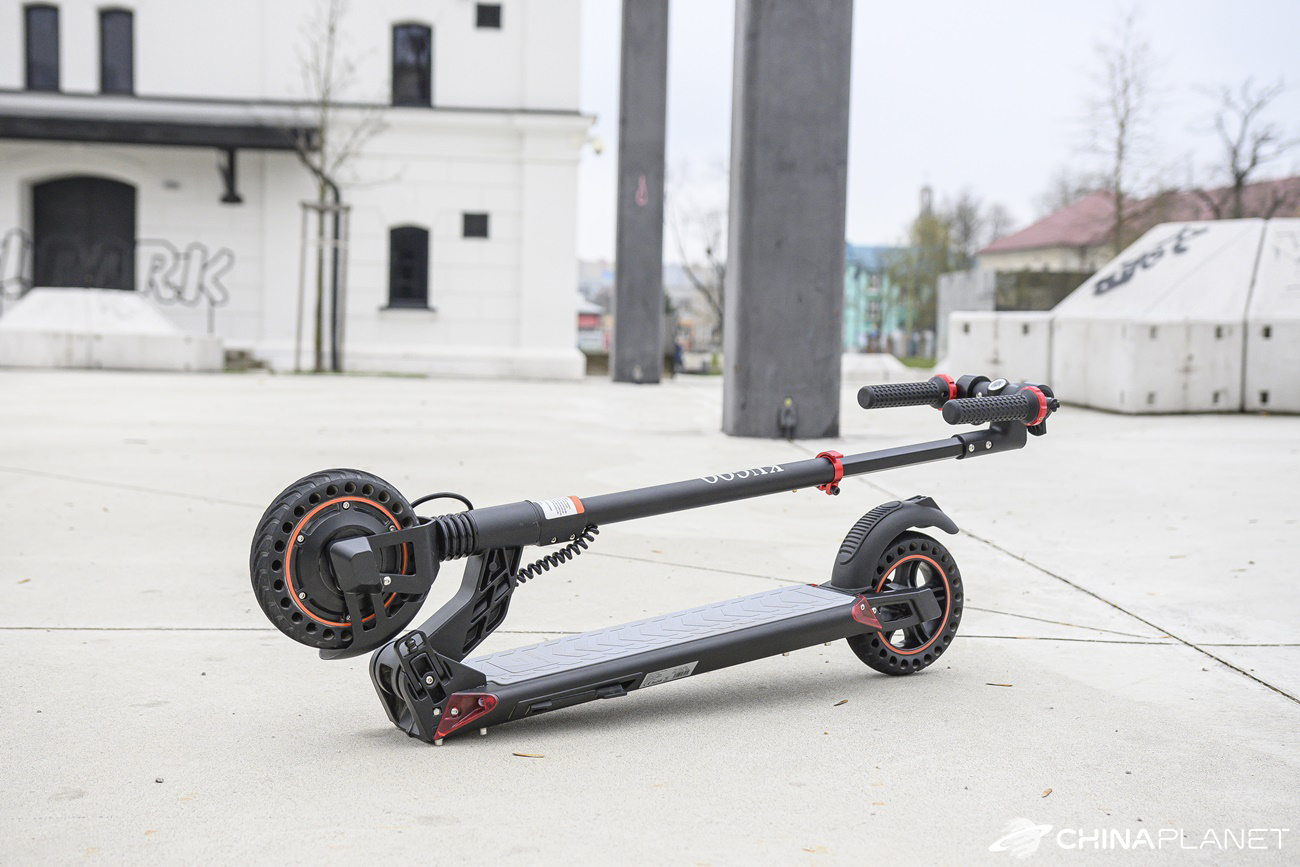 Kugoo The S1 Plus has the power 350 W with the engine mounted in the front wheel. The maximum speed is 30 km / h. However, there are 3 driving modes, which are distinguished based on the maximum speed. The first mode has a maximum speed limited to 20 km / h, the second to 25 km / h and the third manages up to 30 km / h. 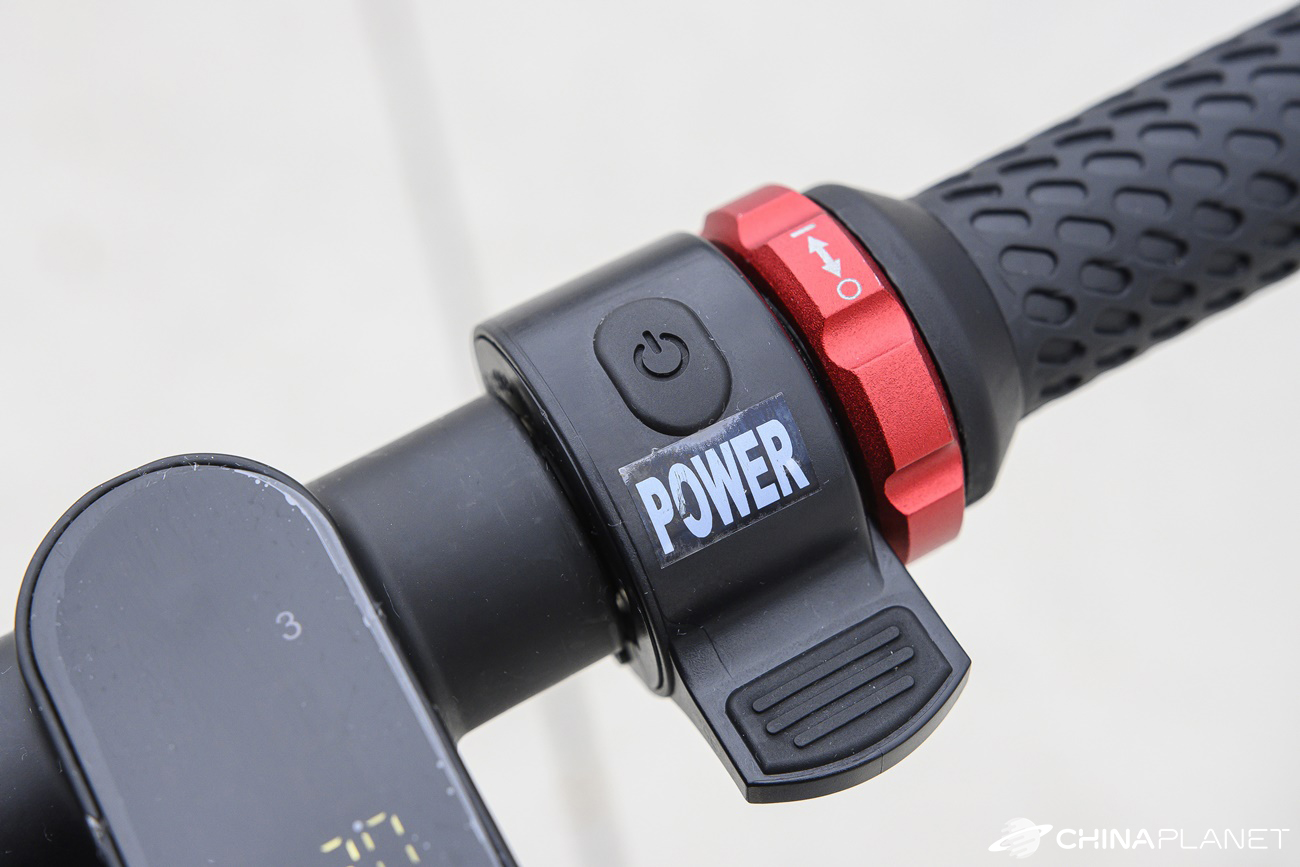 The modes are changed using the button on the throttle lever. Using this button, the scooter is also switched on and off (by holding it down). There is a button on the brake lever to switch the lighting on and off. Both buttons are rubberized and are relatively difficult to press. 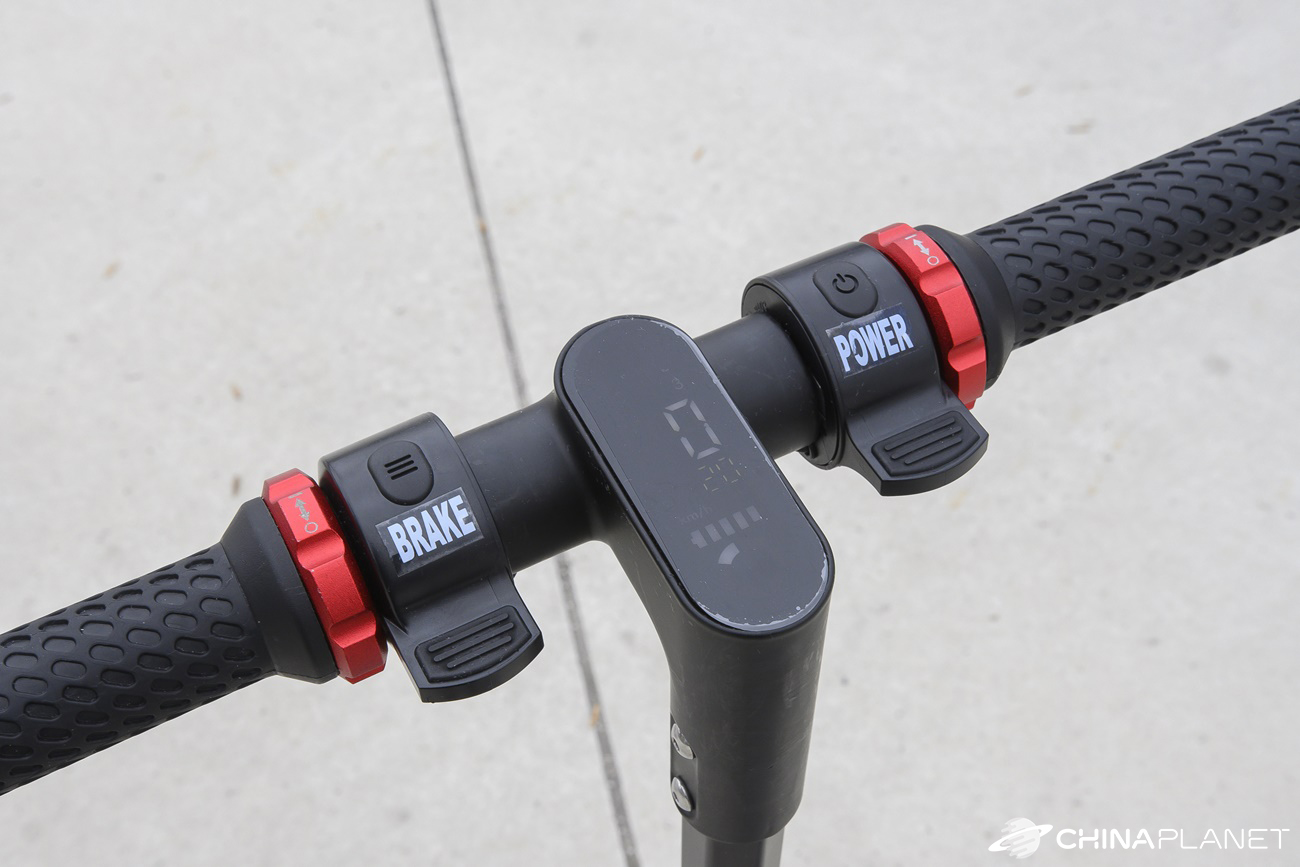 The speed and the currently selected mode are shown on the display in the middle of the handlebars. It also has protective glass from production, which in our case was not glued too precisely and contained not only air bubbles but also scratches right out of the box. From our experience, however, with the rider's weight of 78 kg, we did not reach a speed of 30 km / h. The display showed a maximum of 28 km / h. 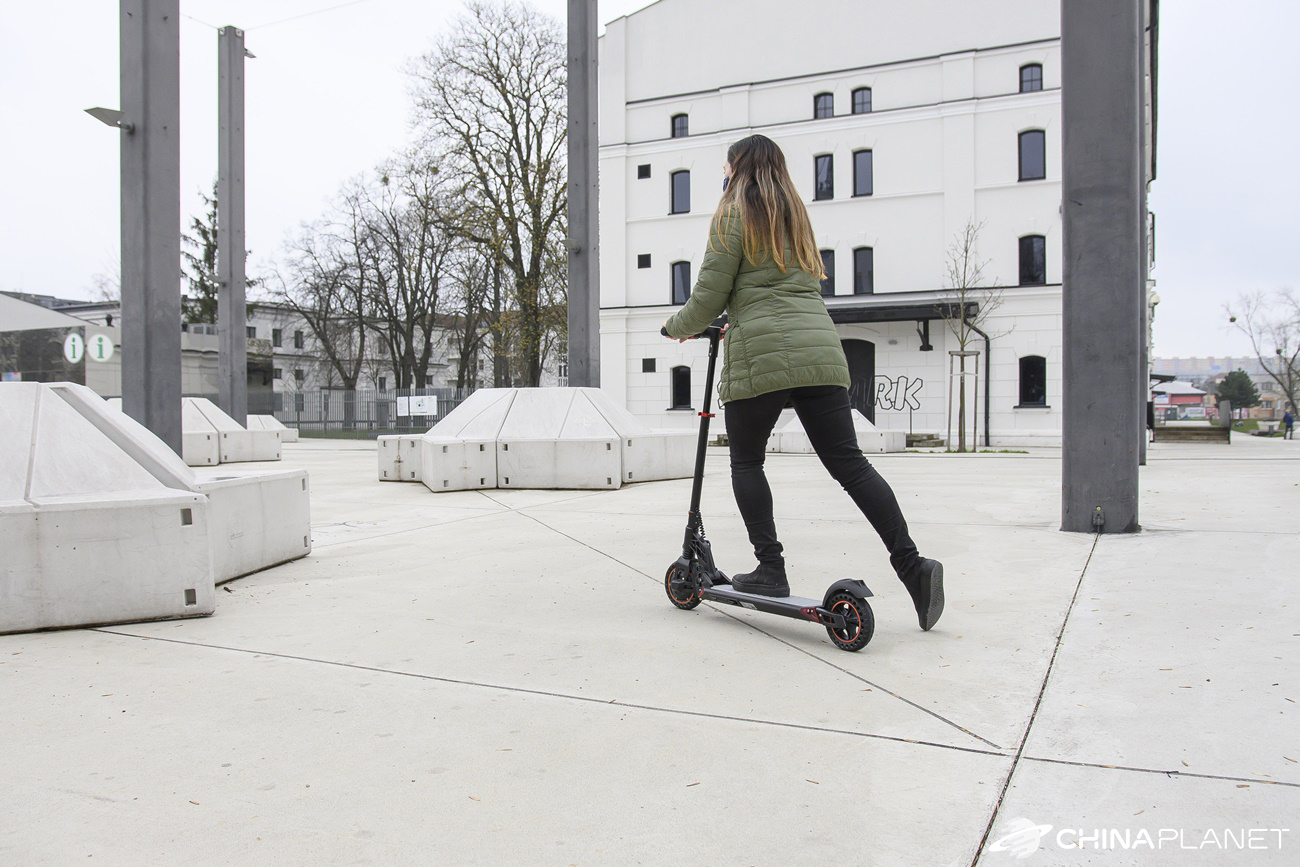 As we mentioned above, riding a scooter with our height was not completely comfortable, but overall we evaluate the riding characteristics very positively. Lower people ride it much better. As for the hills, the manufacturer states a maximum incline of 15 °. During the testing, we rode with the scooter around Košice, where there are a number of ascents and descents. 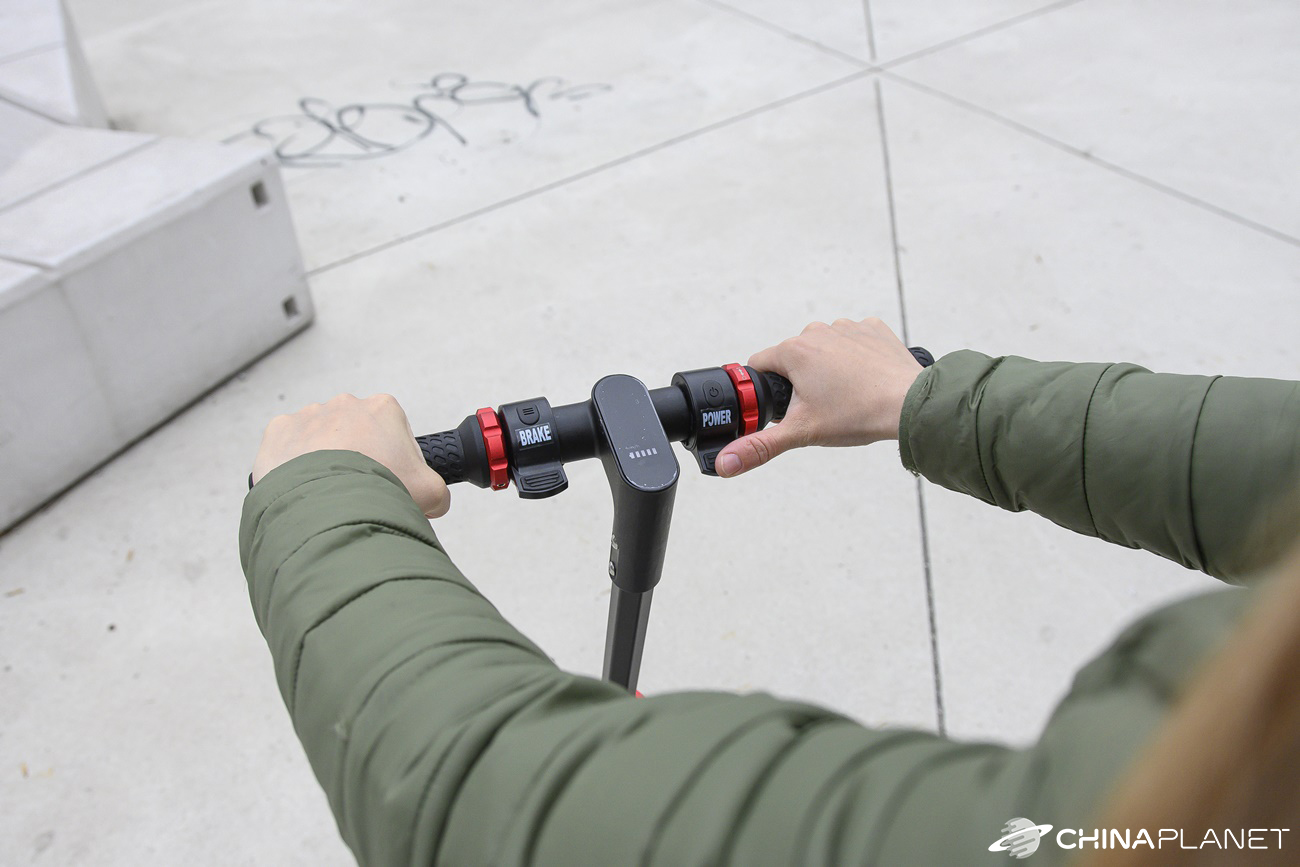 Compared to the Xiaomi Mi Electric Scooter Pro, it manages Kugoo hills worse, which is probably due to a weaker battery.

Kugoo it gives a maximum range of 30 km per charge, but does not specify under what conditions. The battery itself has a capacity of 7.5 Ah at a voltage of 36 V. It consists of several Li-ion 18650 cells. 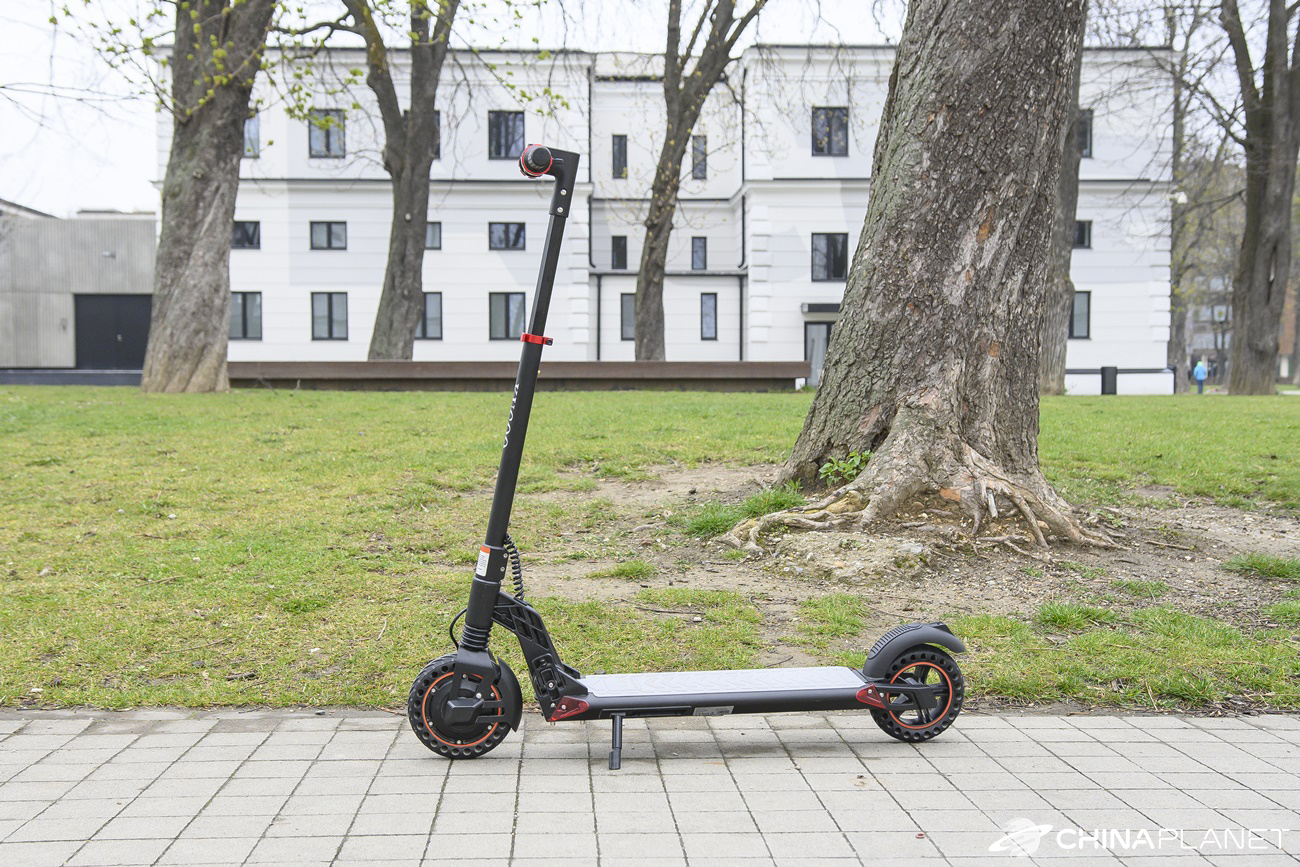 During our endurance test, we rode mostly on the plane on the bike path, so that we did not have to stop often and we were curious about the real range. With our weight of 78 kg and constant use of the fastest mode, we managed to get to the maximum 17 km until fully discharged. 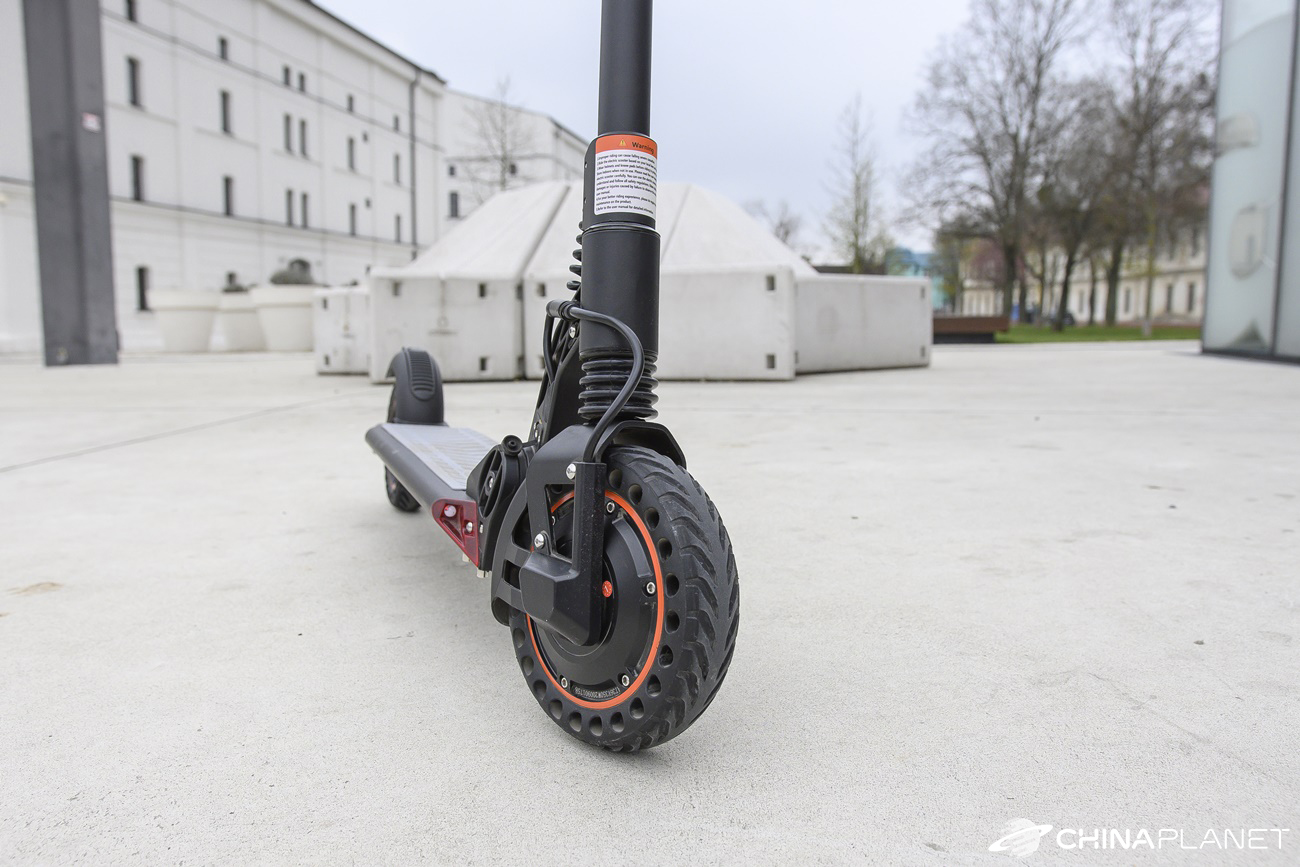 The scooter does not inform about the percentage of the battery balance, only the battery symbol divided into 5 parts is shown on the display. From about half the capacity you can already feel the decline in performance, which continues to decrease and at the end is more pronounced. 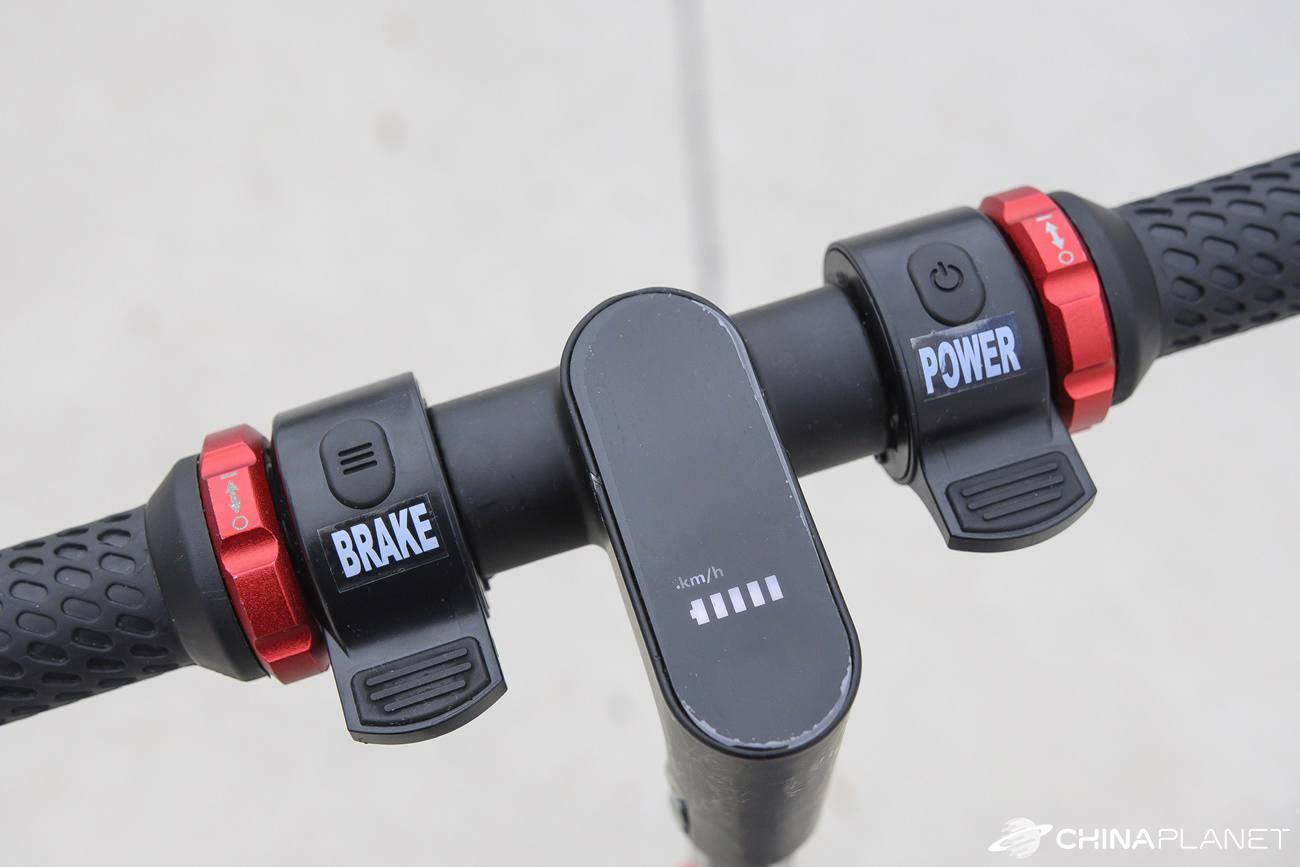 The charging port is located next to the folding mechanism, on the opposite side to the clip. The port is protected by a rubber cover to prevent dirt from getting into it, but it does not hold very well in place and often falls out.

Charging from full discharge to full takes approximately XNUMX hours using the charging adapter 4 hours and 45 minutes. Only the LED on the adapter indicates the charging status. If we turn on the scooter while charging, it does not show any charging information on the display.

Kugoo The S1 Plus lacks a classic disc brake. There is only an electronic brake, which is controlled by a lever in the left part of the handlebars, and a mechanical brake in the form of a step-on mudguard. The electronic brake is quite effective, but if you need to brake hard and stop as soon as possible, it is not ideal. It also tends to brake more sharply when the brake lever is initially pressed, and thus braking is not the smoothest. 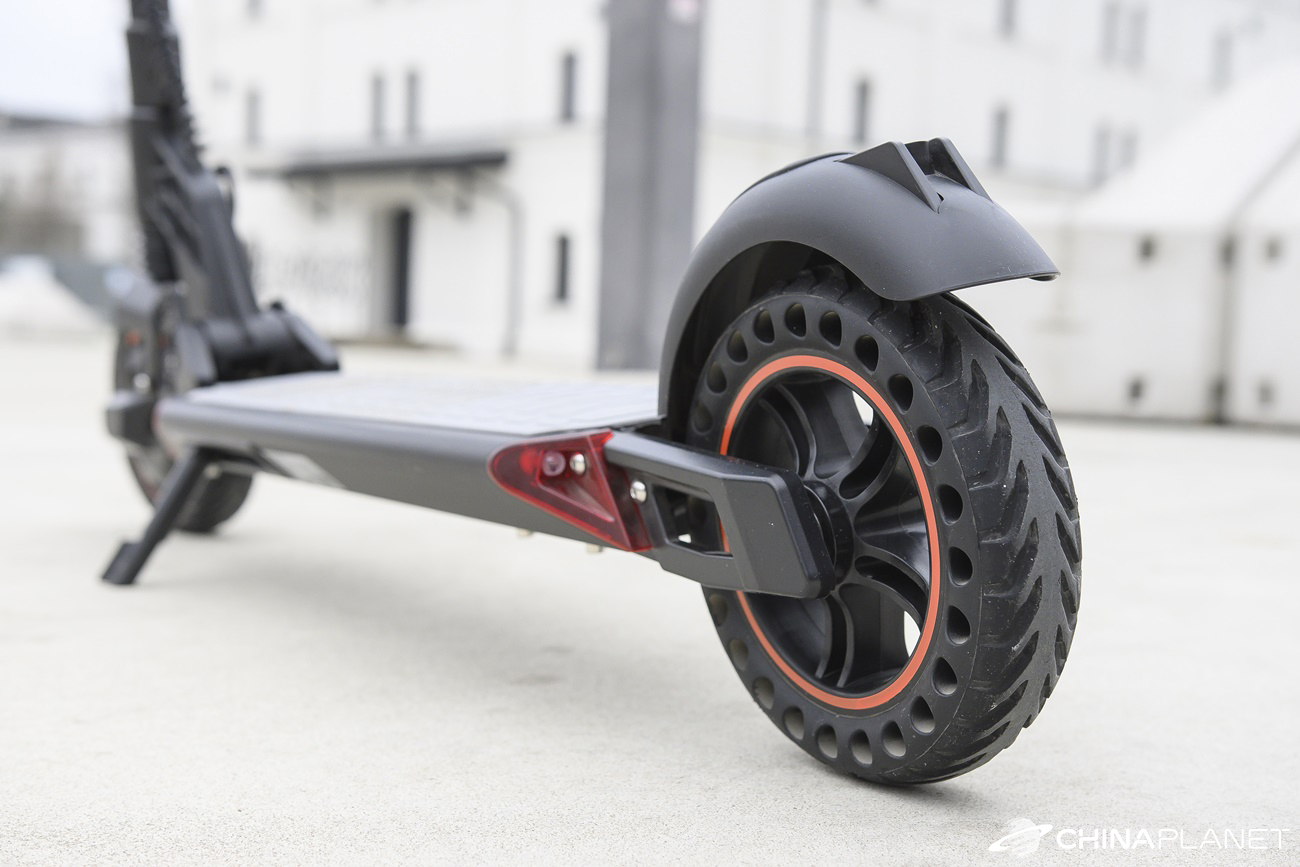 In critical situations, it is necessary to use the footprint of the rear fender, which, however, can send the scooter relatively quickly to skid, so it is necessary to get used to such a style of braking. Personally, we prefer the classic disc brake, which we know not only from bicycles, but also from other competing scooters.

Interesting is the scooter lighting, which is turned on by double pressing the button on the brake lever. The red lights are located in all four corners of the treadmill and are very effective during reduced visibility. 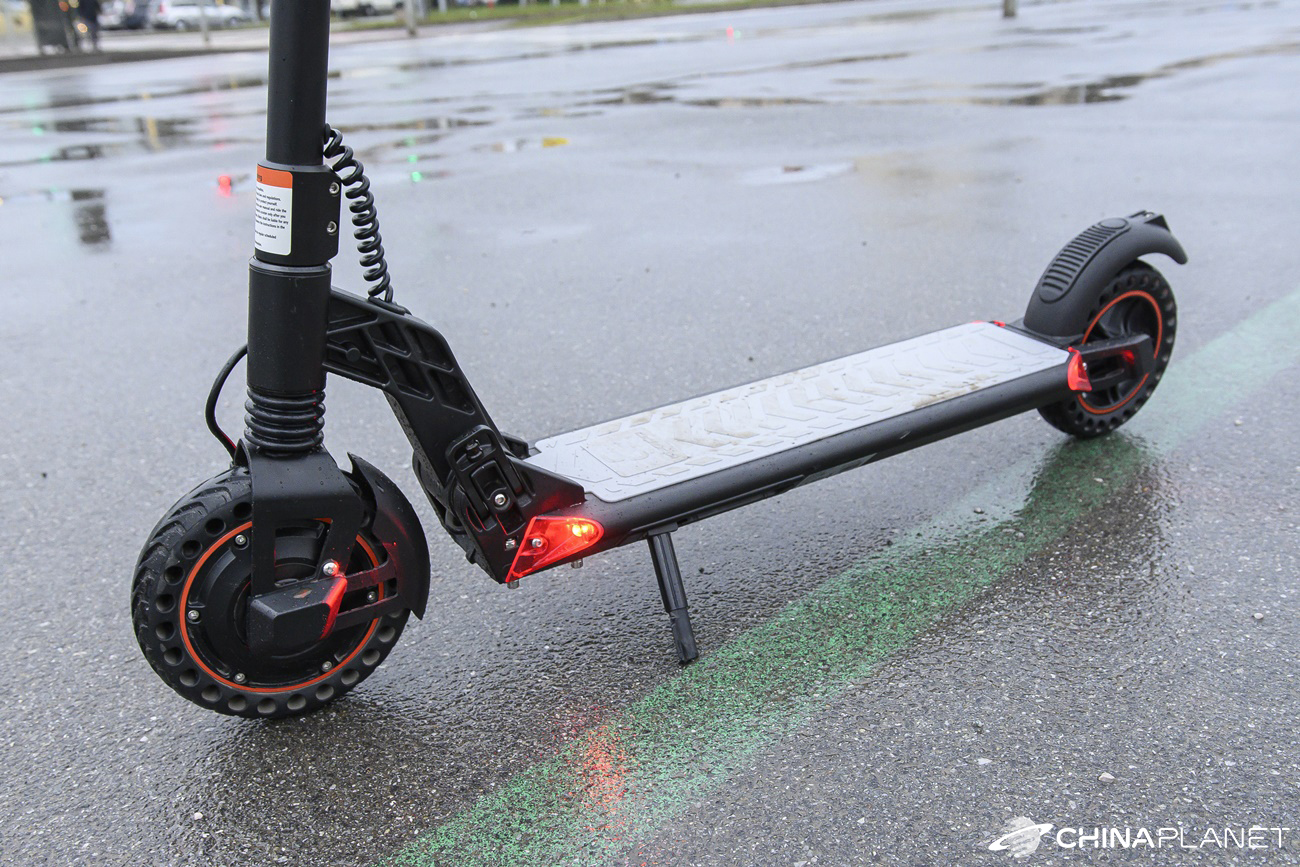 Of course, there are brake lights that light up automatically when braking and a white front light that turns on along with red lighting in the corners.

Electric scooter Kugoo S1 Plus is a great choice for those who are looking for a basic model of scooter for the city at a favorable price. In addition to the low price, the advantage is good suspension, which is not standard in this price range, good driving characteristics, effective lighting and solid construction. 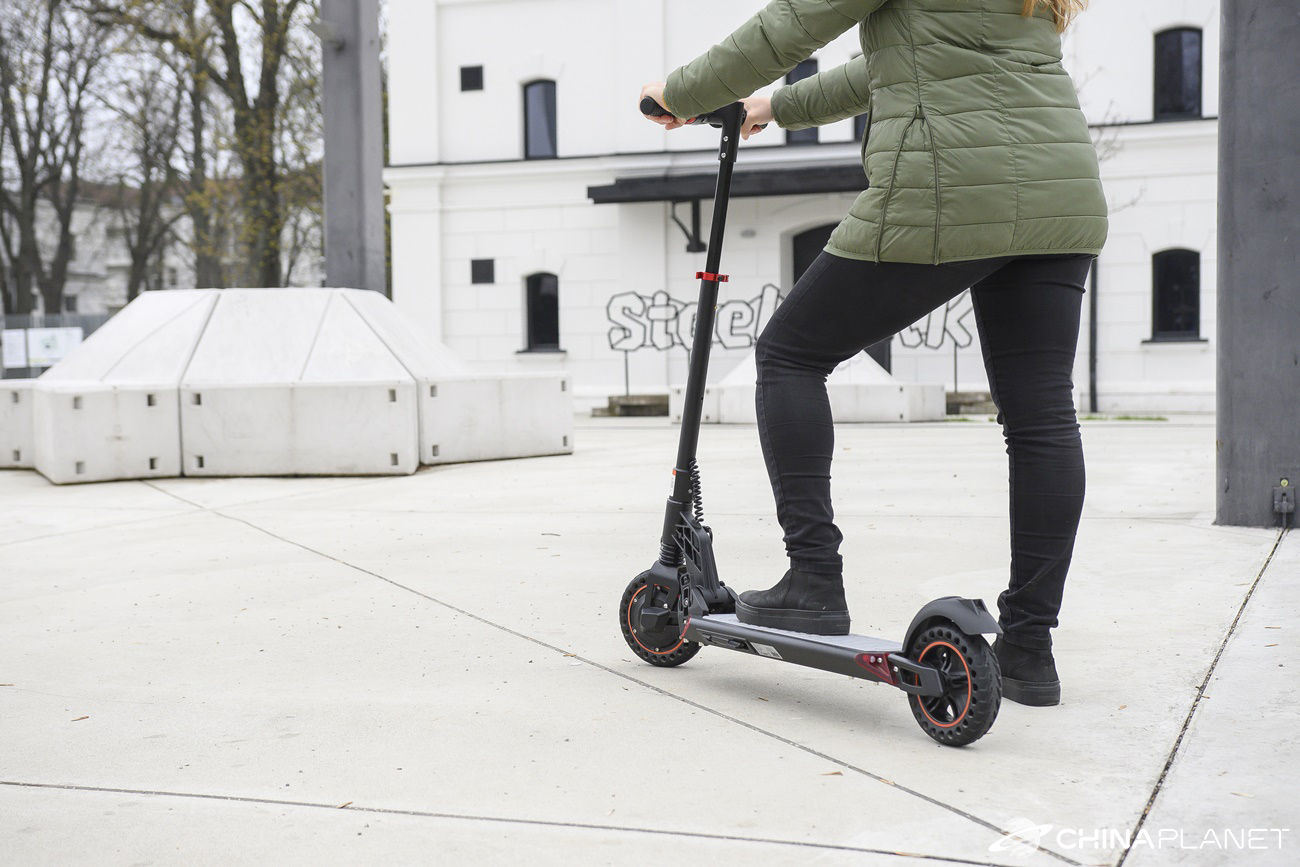 Endurance per charge is not surprising, but it ranks among the average. Full tires guarantee that you will not get a defect and the folding mechanism is very simple and practical.

The disadvantage is the absence of a disc brake and Bluetooth, so you do not set anything in the application via your smartphone or check the condition of the battery cells, as is possible with the competition. On the other hand, basic information is displayed on the scooter's display, so application is not a necessity. 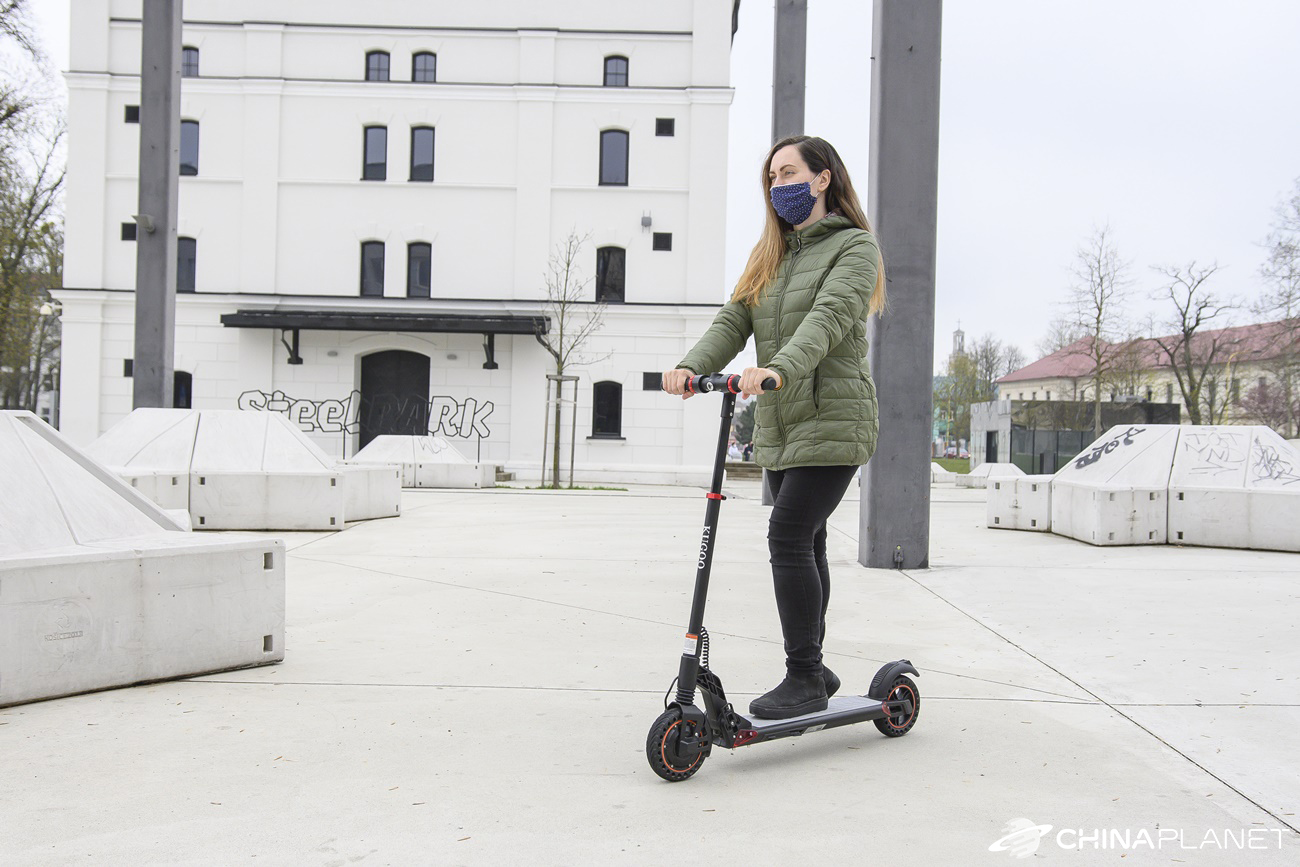 Kugoo At the same time, the S1 Plus is more suitable for shorter figures, since a person with a height of 185 cm would need to move the handlebars a little higher, which the scooter does not allow. Compared to the scooter from Xiaomi in the Pro version, which has a 300 W motor and a 12.8 Ah battery, it manages Kugoo The S1 Plus hills slightly worse, despite the more powerful, 350 W motor. The reason is probably the battery, which has "only" 7,5 Ah and maximum engine power. But there is a difference of more than 100 between these scooters € and therefore you are Kugoo The S1 Plus performs very well.

We repeat that you can buy it from our verified seller Geebuying, which has it in stock in the EU. On the Kugoo scooters also have a service center in Poland, so you don't have to send them to China in case of a complaint.

Baseus The Car Air Compressor is smaller than a phone, inflates 8 wheels on a bicycle and also has a galuss reduction