The Realme Watch S and S Pro smart watches have received official certification. They should be here soon

Realme has been in the smartphone business for some time. However, it recently decided to launch its first smart watch. We had the opportunity to see them in the form Realme watch.

New smartwatches from Realme have been certified

However, according to a recent certification, we have information that Realme will release a series of new watches, specifically realme watch s a Realme Watch Pro.

Leaker under the nickname Stufflistings recently unveiled in a post on his Twitter profile both models of the upcoming watch through certification NEMKO. The standard Realme Watch S model also received certification SIRIM.

Watches have 2 side basic control buttonswhich are used to call up the menu / home screen and step back. There will also be full support classic health functions, such as a pedometer, the distance traveled, calories burned, or automatic activity detection - running / walking.

He is present dynamiheart rate monitoring, while it is also possible to set a continuous 24-hour mode. In addition, it is also in the watch sleep monitoring, as well as with 24-hour mode, or SpO2 sensor. It has the task of measuring the value of oxygen in the blood. 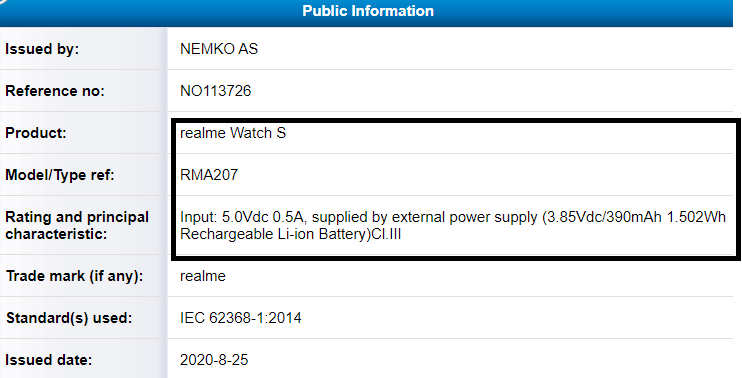 Of the other features, there is also notification center for calls, messages, and third-party applications. There is also music control, remote camera control and the well-known, long-used smartphone search function by its ringing.

Realme Watch S (not the Pro) receives the SIRIM certification.
Launch date must not be too far from now.#Realme #RealmeWatchS pic.twitter.com/FWfsV0OAcI

According to certifications, whether leaks should be official performance around the corner. However, Realme still keeps information about the new smart watch secret.

For information, the original smart watch Realme watch from this popular Chinese manufacturer were launched at the end of May this year. Thousands of these affordable smart watches have been sold to date since the official launch and subsequent launch.

The OnePlus 8T offers up to a 120 Hz display and fast 65W charging. These are the first renders

The MUSTOOL laser meter has a high measuring accuracy, a range of up to 80 meters and a great price