plenty of legroom and higher handlebars

clear application for smartphones with a good design

less traditional, drum rear brake, from which there is an occasional unpleasant knocking sound

the need to activate the scooter using a smartphone application

The Segway brand, which is closely related to Xiaomi, recently introduced a new series of electric scooters for the city called Ninebot KickScooter D. One of them, specifically the model Ninebot KickScooter D28E we tested it so that we could bring you a detailed review.

We will focus on the quality of processing, comfort, driving characteristics and we will also look at driving modes, control, battery and endurance per charge.

Where to buy Ninebot D28E?

He provided us with the scooter for testing verified Goboo dealer, which is also an officially authorized seller of Xiaomi, Ninebot or HOTO products. The scooter arrived from their Spanish warehouse by courier within 5 working days.

The Ninebot D28E electric scooter was delivered to us by the GLS courier, as it came to us from a Spanish warehouse. It is packed in only one box, which has a very attractive and modern appearance. In addition to the scooter itself with the name of the model, there are several images in the comic style.

Regarding the contents of the package, the scooter is in the box in a standard folded state with the handlebars removed. It is stored in foam reinforcements, so the scooter itself is well protected against damage or scratches during transport. 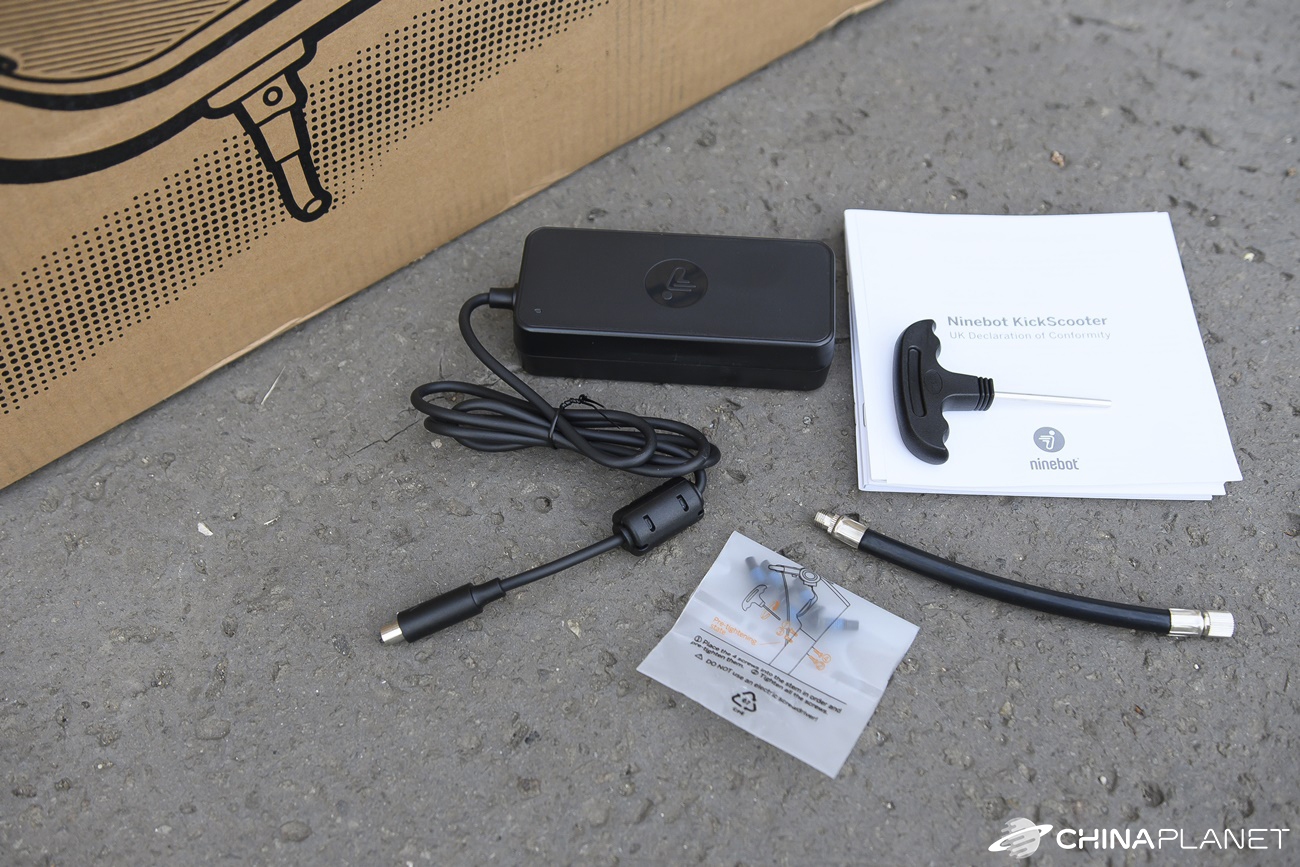 In addition to the scooter, we also find screws and an Allen key for mounting the handlebars, an adapter for the pump, a charger and an instruction manual.

Folding the scooter, quality of processing and design

Ninebot D28E electric scooter is not immediately ready for use after unpacking from the box. Before the first ride, we had to fix the handlebars to the front metal bar with four screws. It is nothing complicated or unusual, as many scooters are delivered in just such a condition. 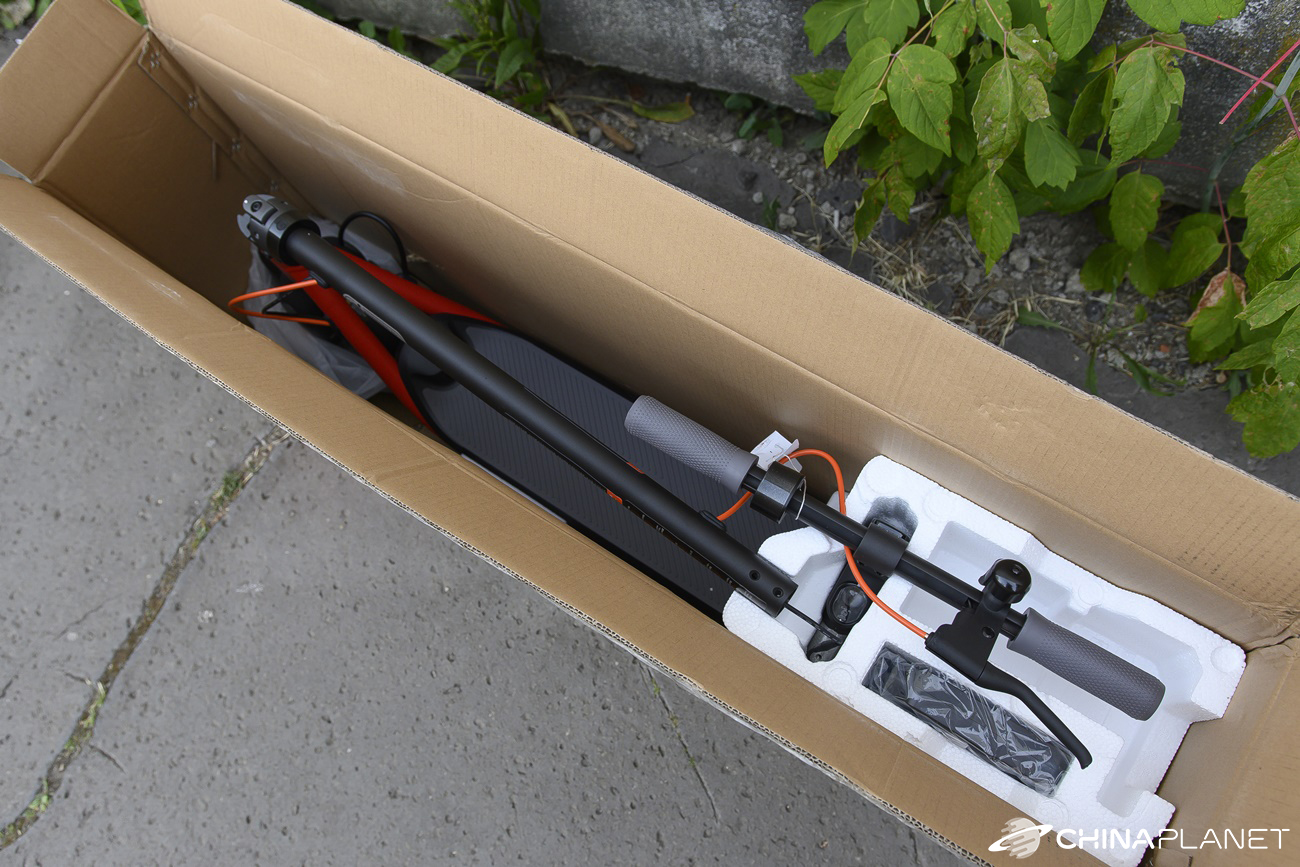 The novelty from the Segway workshop is one of the classic urban scooters, and its design does not deviate from the standard in any way. Its construction is metal with an attractive red color, which gives the scooter a modern and fresh look. Structurally, it is quite reminiscent of the very popular city scooter from Xiaomi, from which it borrowed several elements. 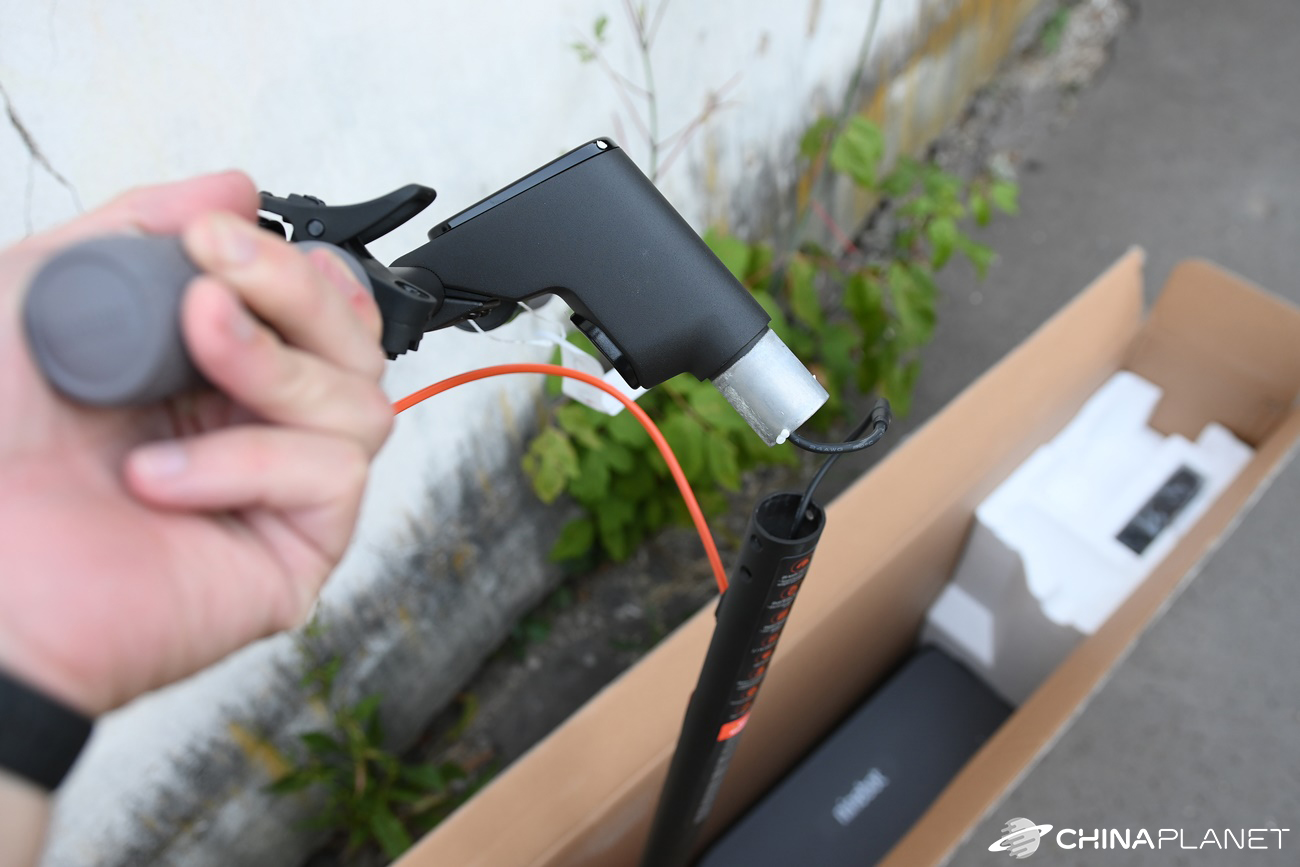 As for the quality of processing, it is at a very high level. The scooter has a high-quality and solid impression. Everything fits together nicely, nothing creaks or has any looseness.

When the scooter is turned on for the first time, it beeps and its speed is limited to 15 km/h. For full use, activation and connection using a smartphone application is necessary. You can download it by scanning the QR code in the manual or by searching in the Google Play store. The app is called Segway-Ninebot. 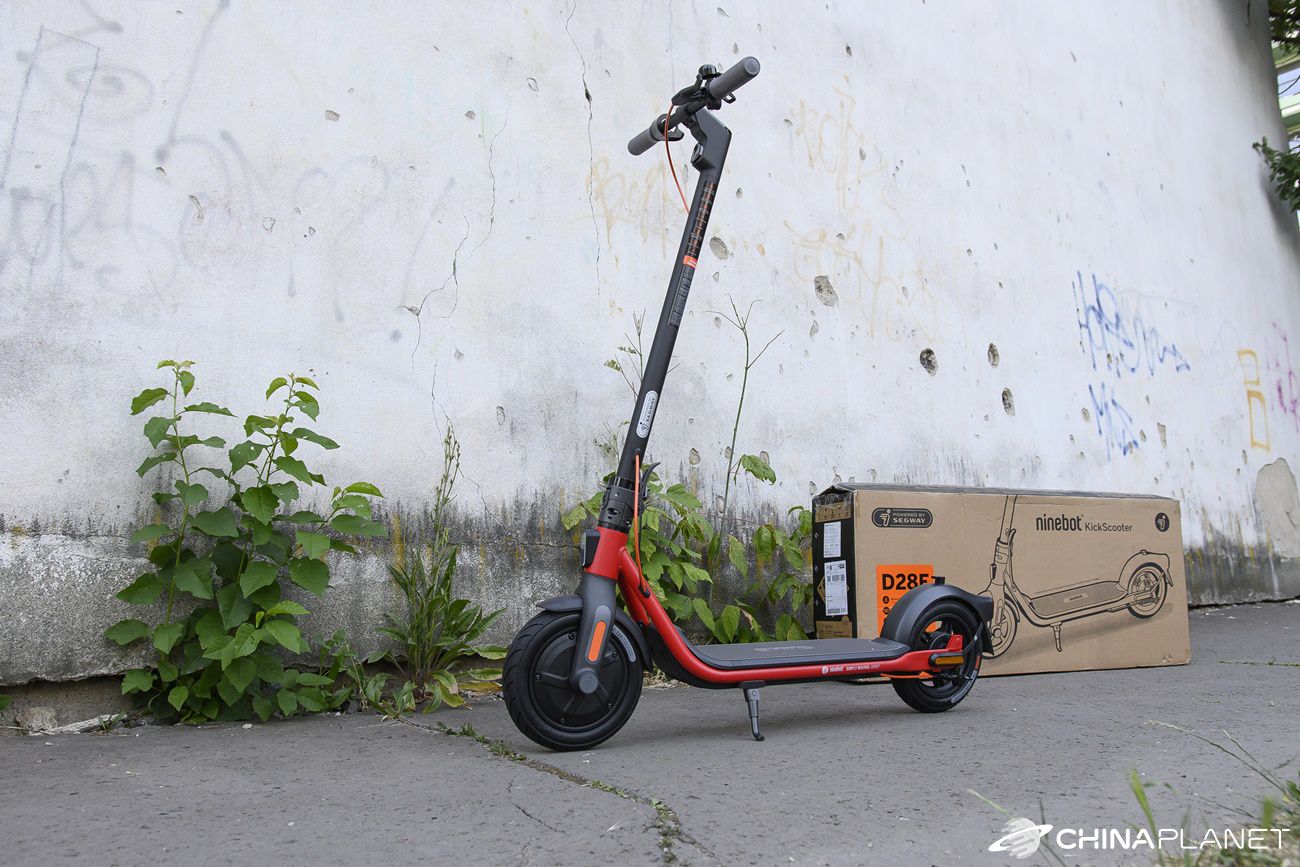 First, we had to create an account and log in to the application, which then automatically found a scooter near the smartphone. The application immediately offered us a firmware update, which took no more than 2 minutes.

The activation itself takes place using the verification numerical code that we received in our mailbox. Before unlocking the 25 km/h speed, we still had to watch a short tutorial on scooter safety.

We find such steps rather unnecessary and we would prefer to be able to use the scooter to its full potential even without the application immediately after unpacking from the box.

The Ninebot D28E electric scooter has a motor located in the front wheel and its power is 300 W. For a city scooter, it is just enough to reach a maximum speed of 25 km/h. 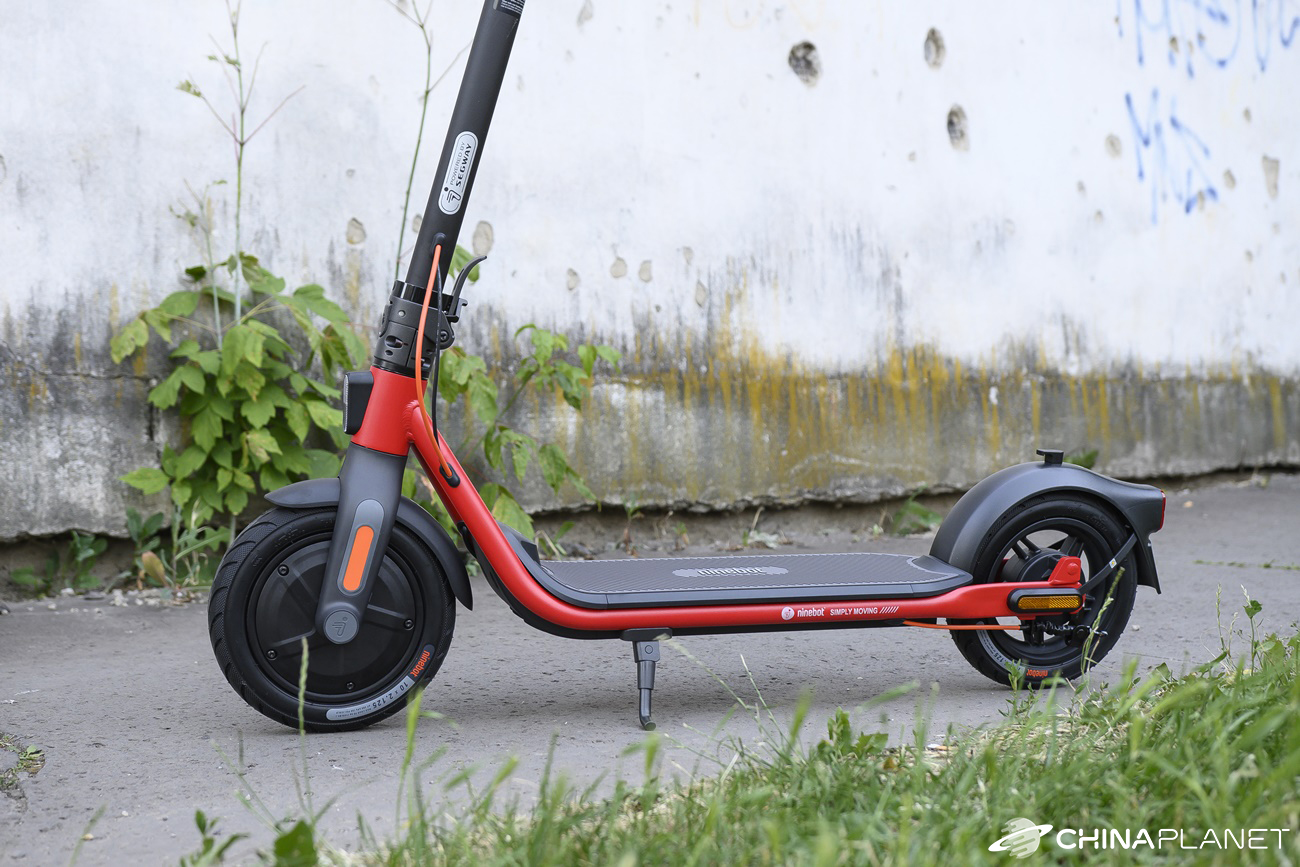 There are 3 driving modes: ECO, Standard and Sport. In ECO mode, the maximum speed is 15 km/h and in Standard and Sport modes it is 25 km/h. The two modes differ only in acceleration, which is higher in sport mode. 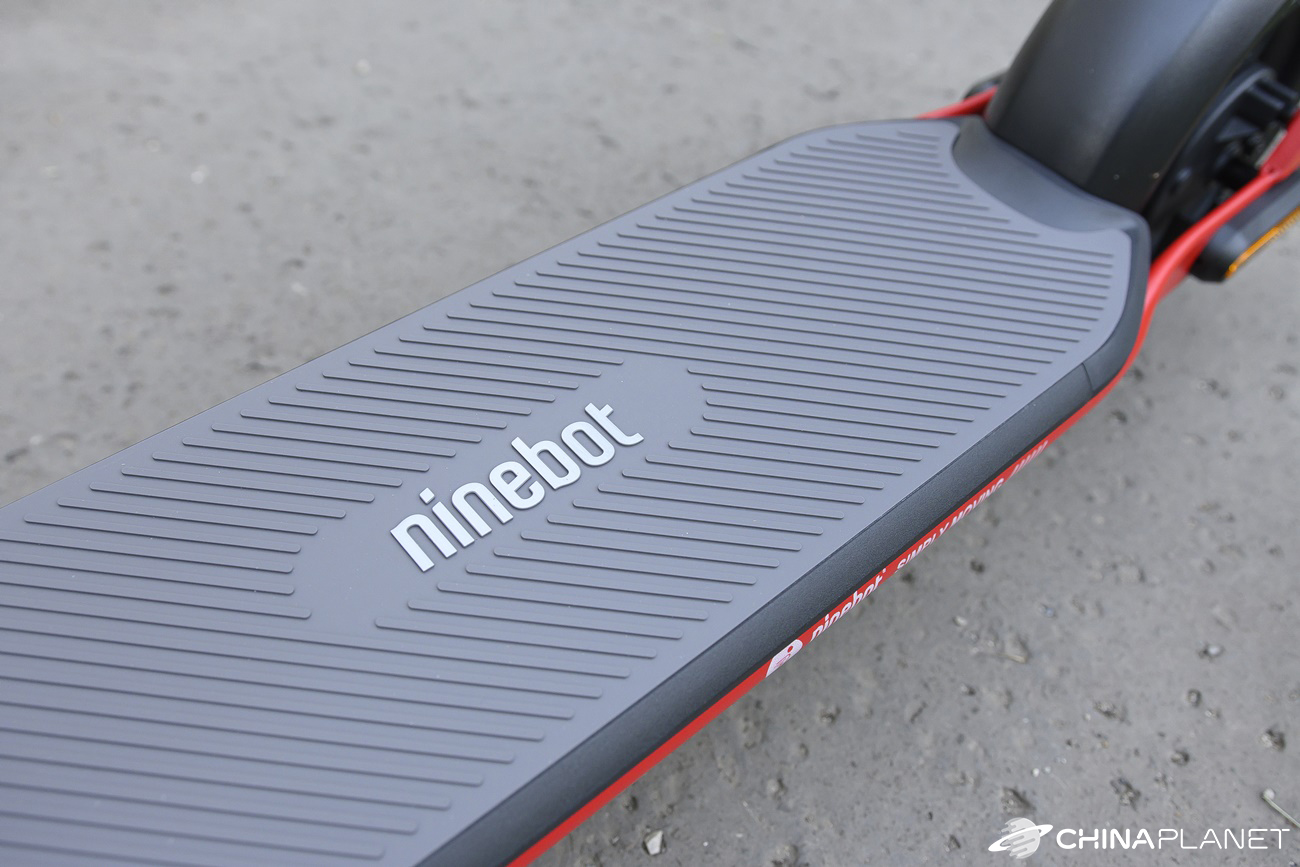 The scooter also supports the so-called Walk mode, or walking mode with a maximum speed of only 5 km/h. This mode must be activated using an application on the smartphone.

The maximum incline that the scooter should be able to handle is 15%, which is realistic, but the scooter slows down a lot on such a steep hill, down to walking speed. It feels very similar to the Xiaomi Mi Scooter Pro, which is our primary city scooter and we use it almost daily.

The display of the Ninebot D28E scooter is located in the traditional place in the middle of the handlebars. It shows the current speed, driving mode, Bluetooth, lights and battery status. The battery status is only shown graphically on the scooter's display through five sections. You can find the percentage expression only in the application on your smartphone. 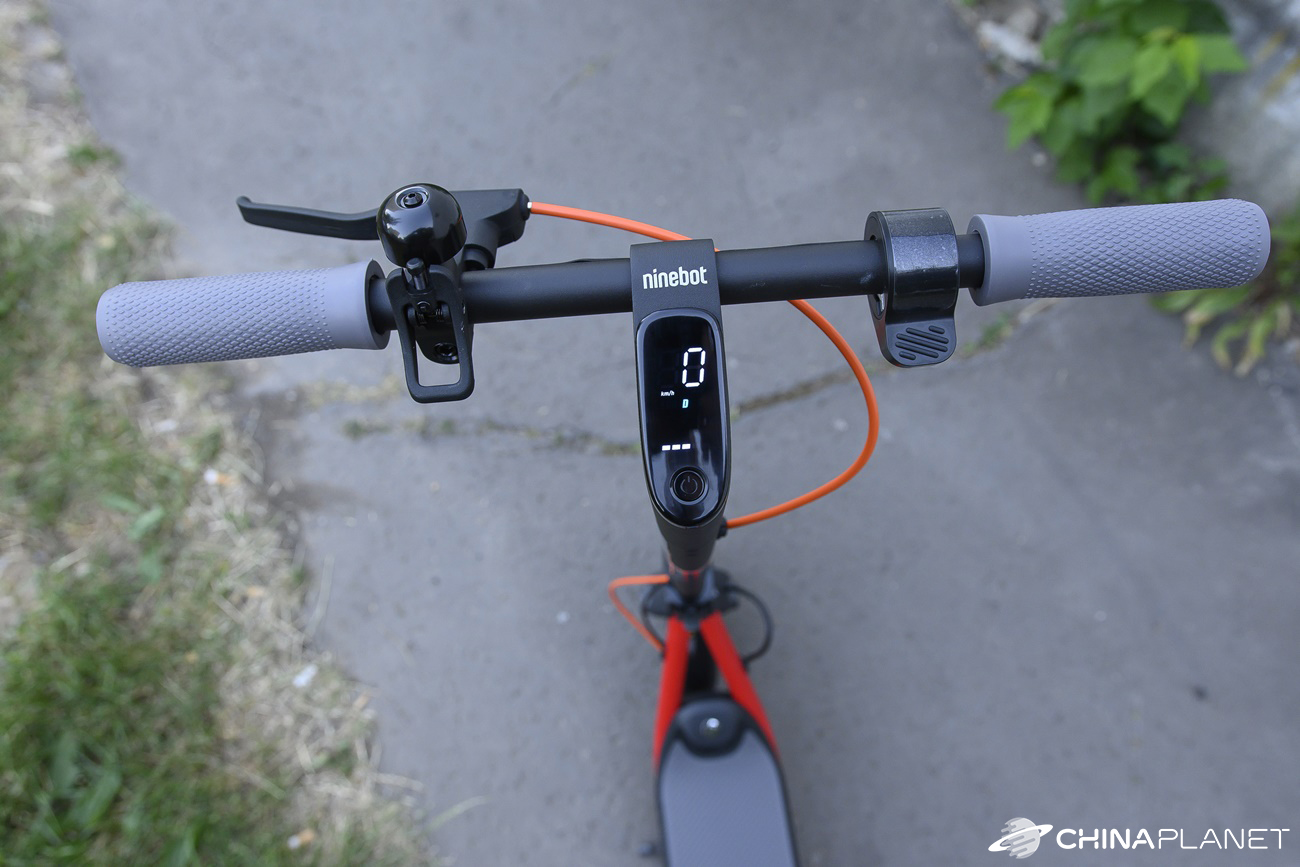 The handlebars are 47.5 cm wide and have comfortable grips that are pleasant to the touch and do not slip. On the right side is the gas control and on the left is the brake together with the bell.

The Segway-Ninebot smartphone application has a simple but very clear design. The home screen shows your current location, battery percentage, remaining range based on battery capacity, and total mileage.

Below we can also find recorded rides, walking mode, recuperation settings and firmware update. The bottom bar of the application still hides a kind of feed with posts from other users and our profile. 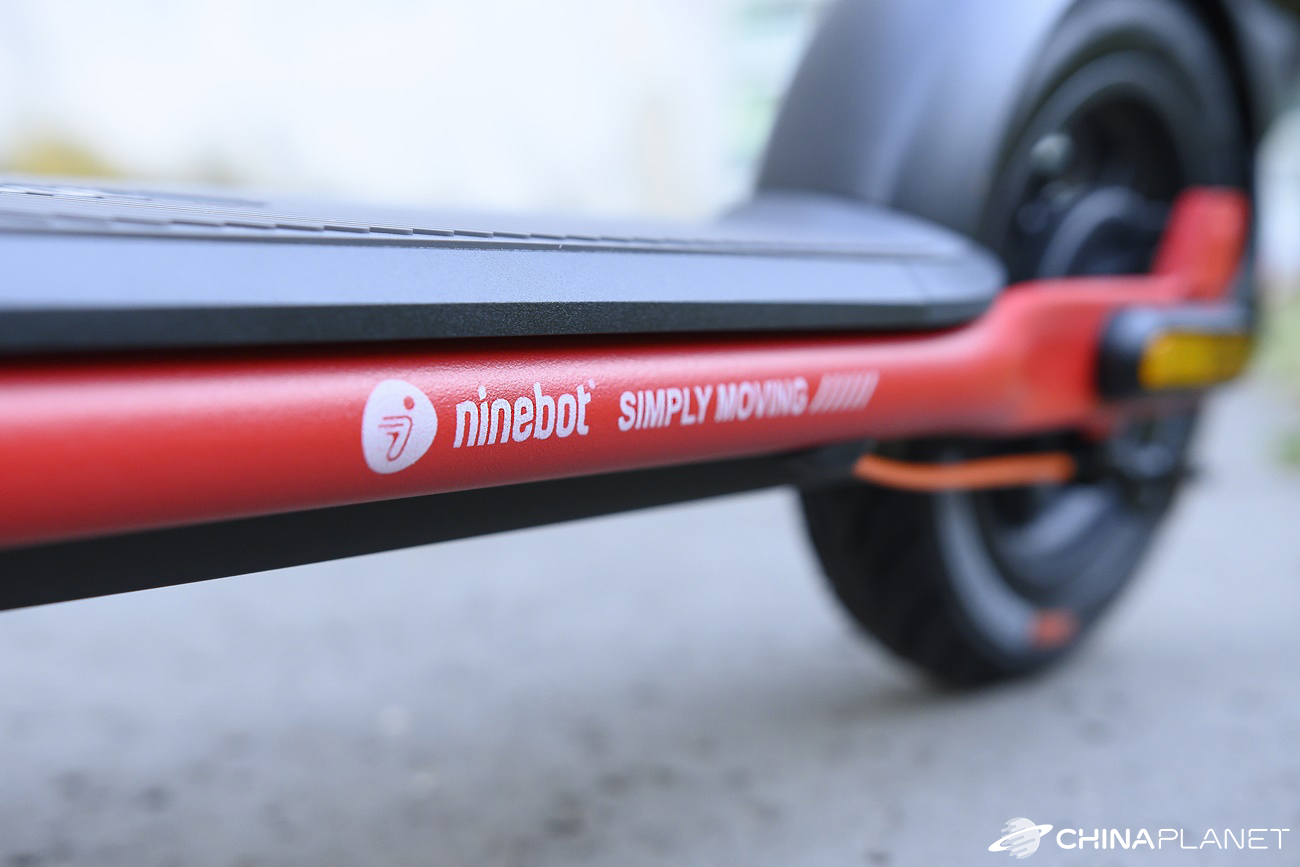 In addition to this data, we also find settings here. However, they only contain a firmware update, recuperation settings (weak, medium and strong), turning on walking mode (5 km/h) and the ability to connect to multiple users.

The initial screen still hides a couple of inconspicuous elements, which are activity monitoring and the so-called stealth mode. When tracking the activity, the route on the map, kilometers traveled, maximum speed and time are recorded. Stealth mode triggers an alarm when the scooter moves suspiciously while it is idle.

The Ninebot D28E has 10-inch wheels that are inflatable, which is nice since the scooter lacks suspension. Inflatable wheels thus absorb at least some of the shocks and ensure a more comfortable ride compared to solid wheels, even if at the cost of a risk in the form of a puncture. 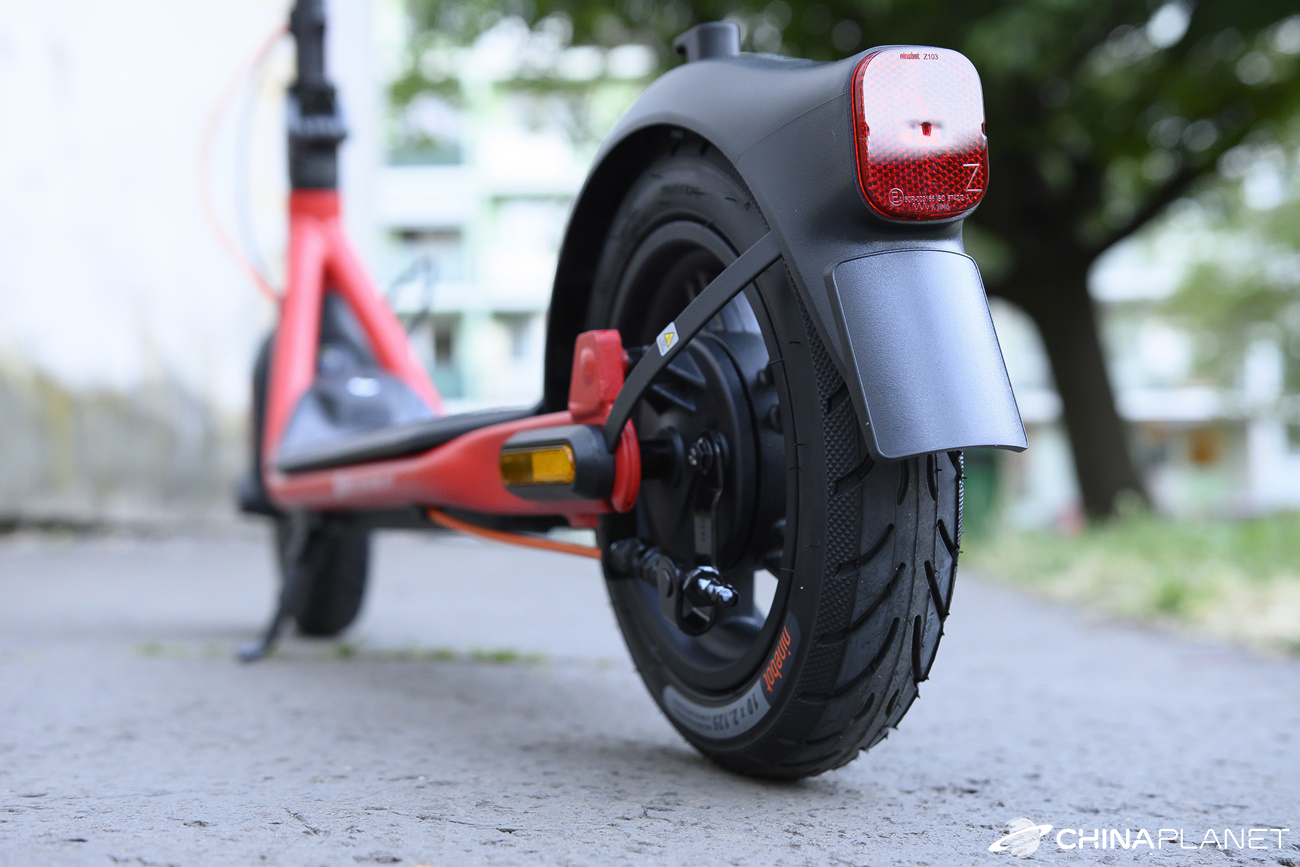 Less traditional is the rear brake, which in this case is a drum. Most scooters have a regular disc brake, which is easier to maintain and service at home. However, drum brakes are also slowly disappearing from cars, so this solution in a scooter is slightly unconventional. On the other hand, the brake is thus better protected against dirt. 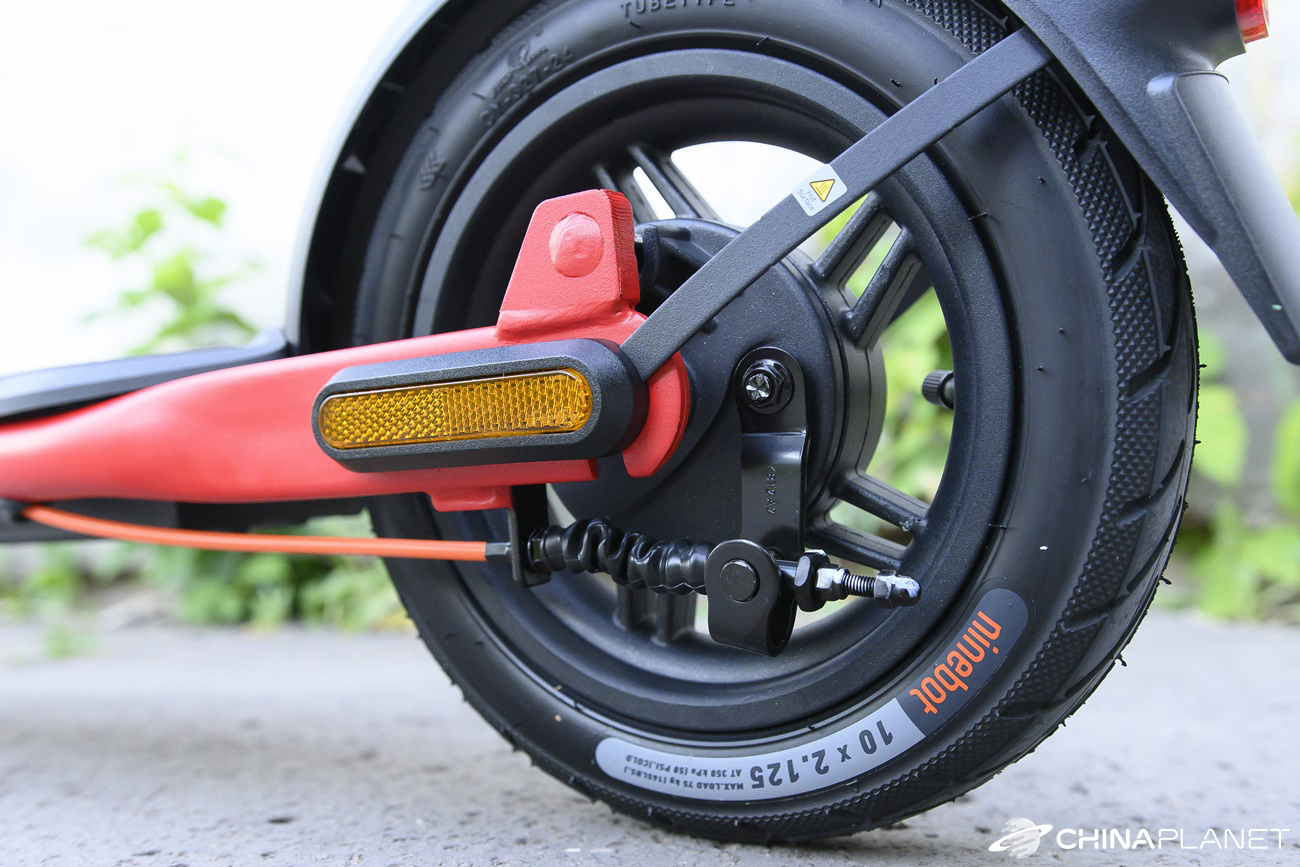 As for its efficiency, it is good, but sometimes there is an unpleasant knocking sound. Overall, we had a very comfortable ride with the scooter. We also appreciate the relatively high location of the handlebars, approx. 119 cm from the ground, which makes the scooter suitable and very comfortable even for taller figures. 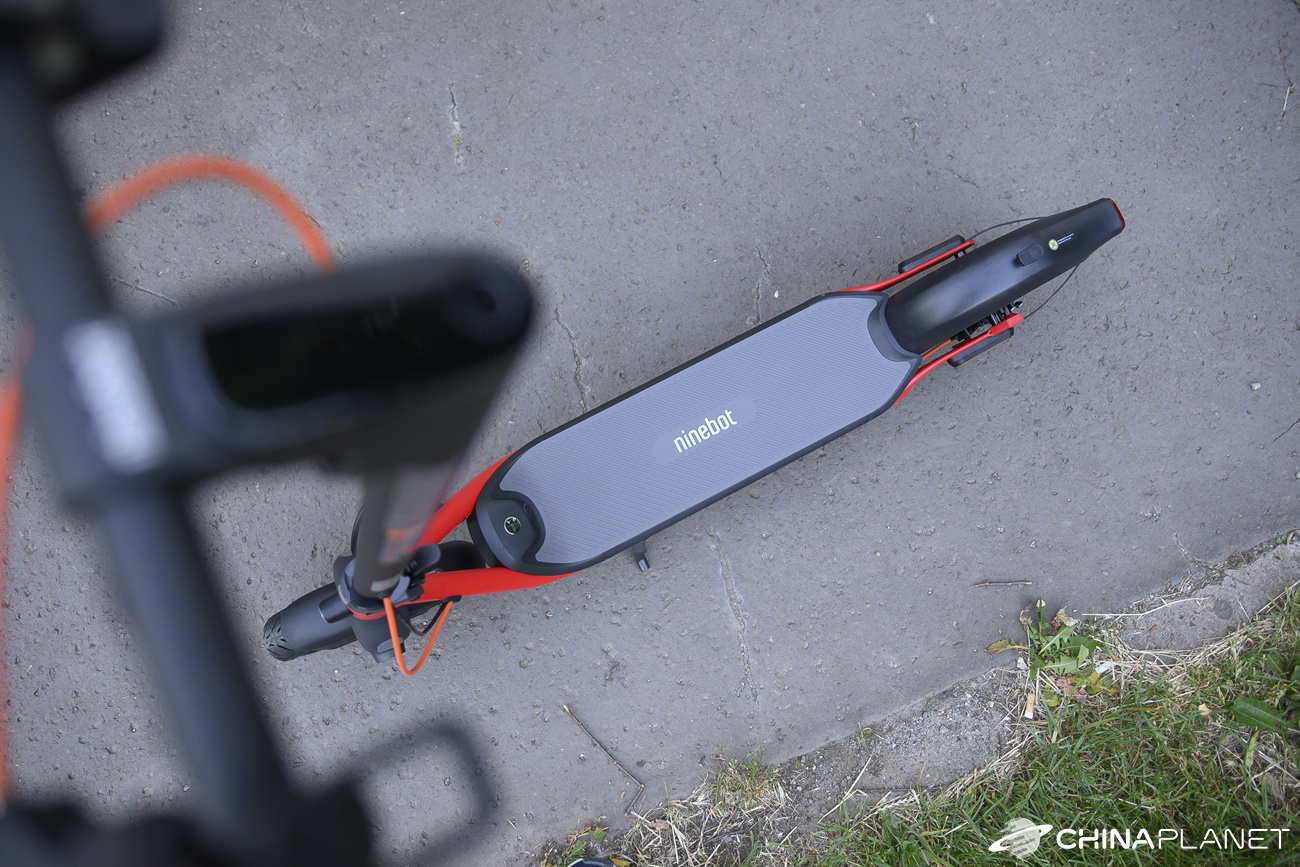 The foot platform also offers plenty of space and a non-slip, rubber surface.

The battery is located under the foot platform and is 275 Wh, 7650 mAh. The range given by the manufacturer is 28 km per charge. Of course, we checked that one. 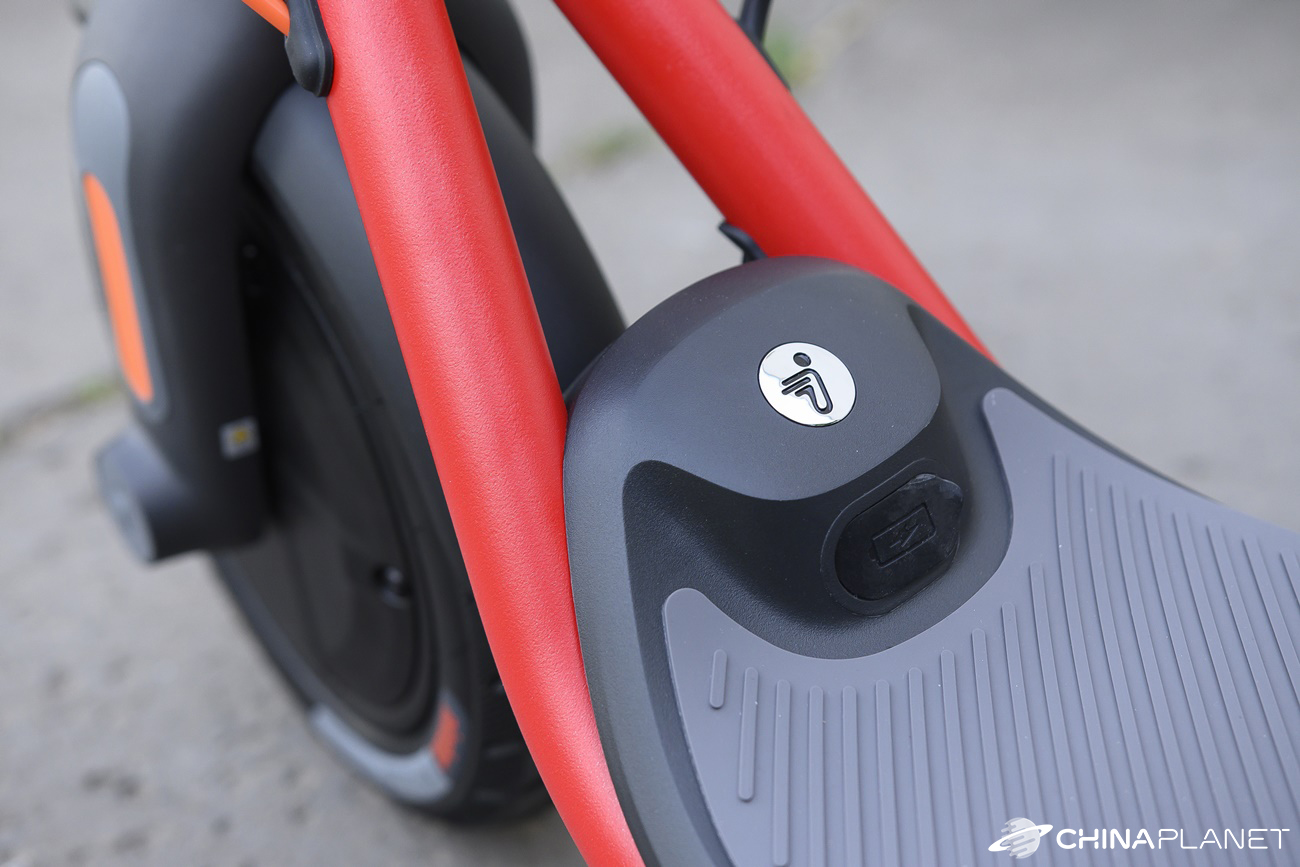 So we attached a stand for a smartphone to the handlebars of the scooter, on which we started tracking the activity in the Runkeeper application but also in the scooter application, Segway-Ninebot.

During the test drive, we drove around the city, mainly on cycling and classic trails in the highest Sport mode until the last part of the battery turned red. By the time we got home, the remaining battery capacity was around 15%. 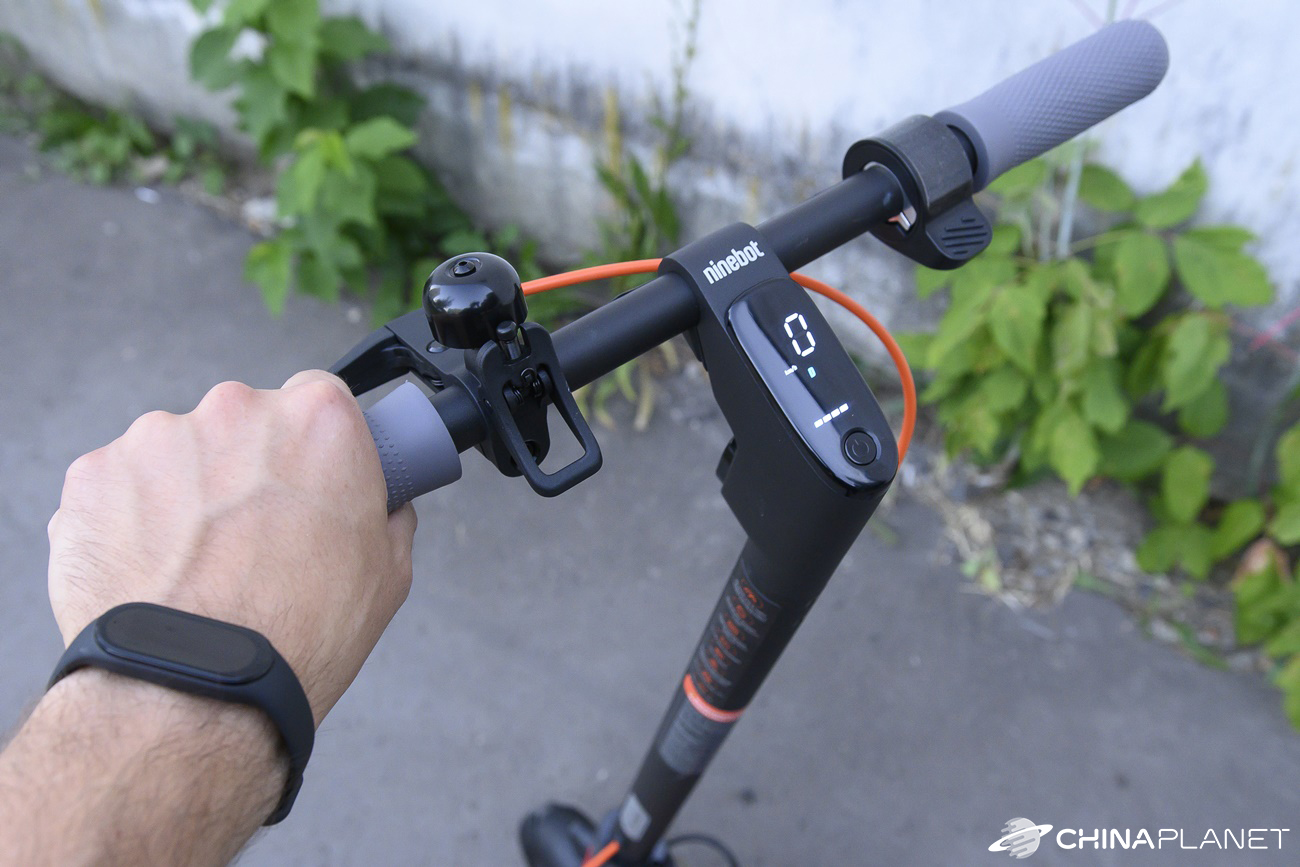 However, after checking the applications, we were slightly surprised, as both methods of measuring the distance traveled displayed completely different values. However, the Runkeeper application, which measures the distance using GPS, should be the most accurate. It measured 16.23 km, while the Segway-Ninebot application measured only 8.98 km and an inaccurate route.

This value is almost identical to the one we measured using the GPS in the Runkeeper app, thus confirming the measured distance. 16 km is not much, a stronger battery with a higher capacity would be nice. In this way, the scooter is suitable only for short trips to work, school or elsewhere within the city. You have to prepare for more frequent charging, which takes about 4.5 hours. 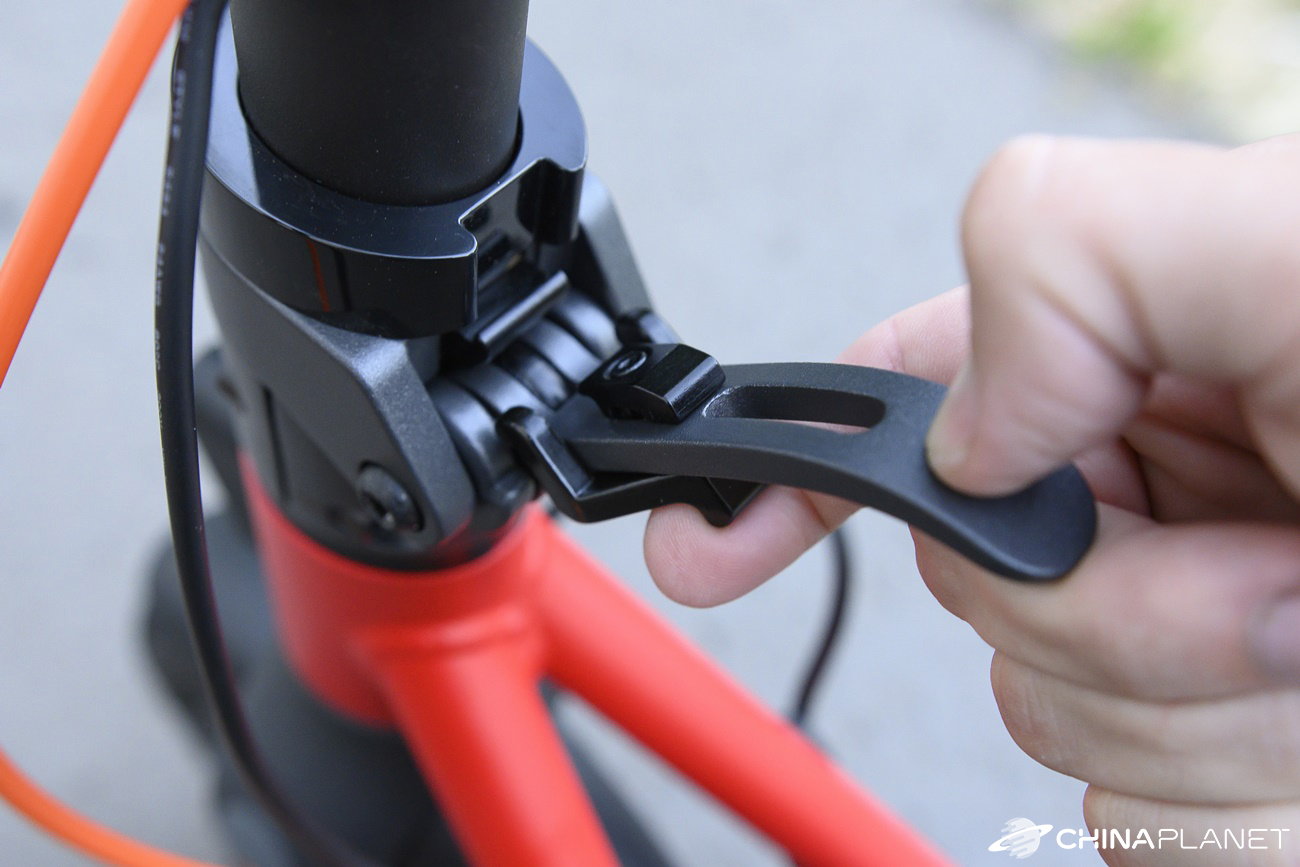 The folding mechanism system with the so-called tab in the front is almost identical to the one you find on popular scooters from Xiaomi. The scooter is quite comfortable to carry when folded, and thanks to its relatively low weight of around 15 kg, anyone can carry it like this.

The Ninebot D28E electric scooter is a typical urban scooter with a 300 W front motor and a maximum speed of 25 km/h. It impresses especially with its attractive appearance with red structural elements, high-quality processing and a clear display. We also really appreciate the inflatable 10″ tires, which makes the scooter very comfortable and it is not a "cobbler". 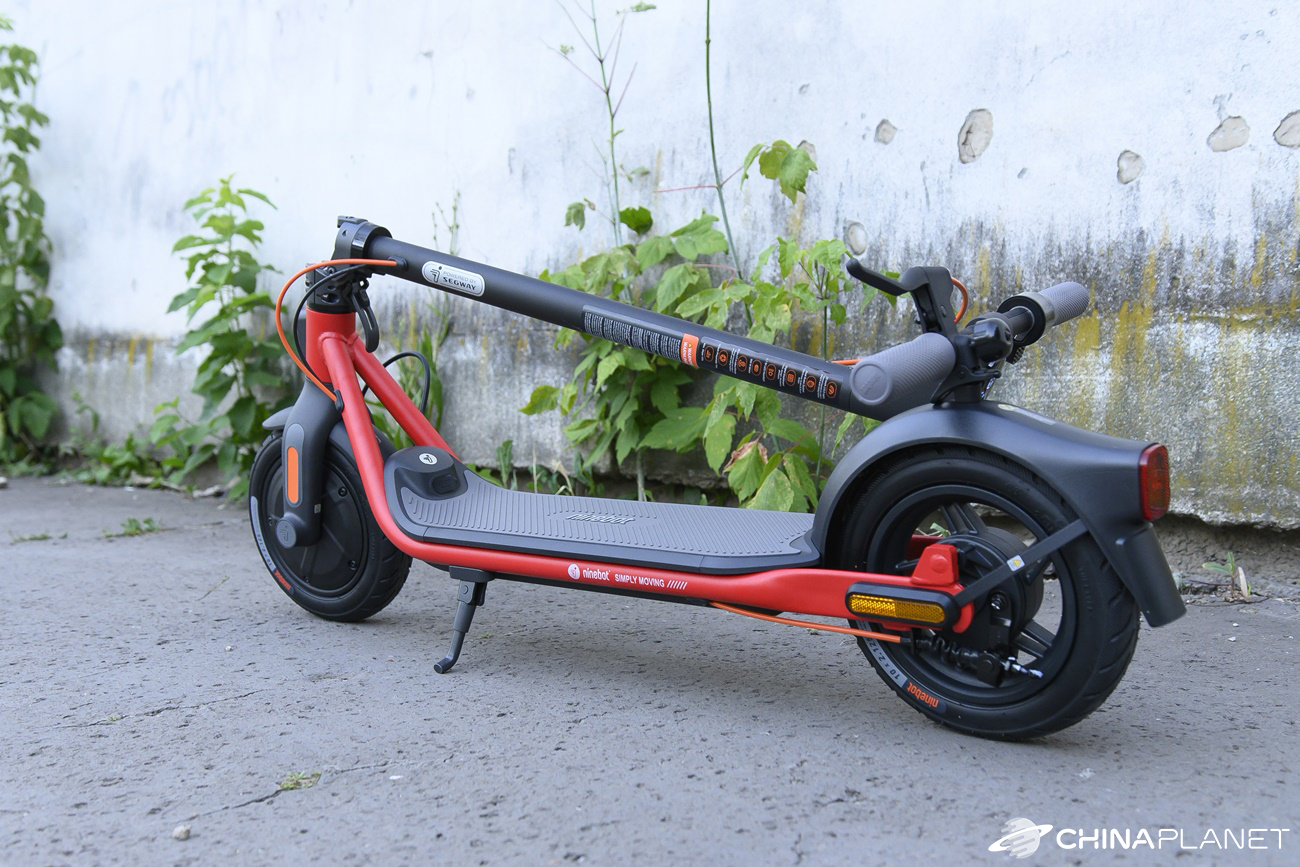 There is also a smartphone application - Segway-Ninebot, which will offer several settings and information about the total range. The relatively weak battery, which is only sufficient for approximately 16 km with an 80 kg rider in the strongest Sport mode, will not please you.

If the low range is a problem for you, an interesting choice could be the higher model D38E, which has a 367 Wh (10200 mAh) battery and a manufacturer-specified range of around 38 km. Overall, it is the same scooter and the battery is the only difference between them.

Engwe The X26 is a new electric bike with a dual battery, a huge fork and a beautiful frame shape

Tactical 50 liter rucksack also suitable for carrying things to the gym. It has up to 8 colors and an offer in the EU warehouse