The Lenovo Legion smartphone has appeared in AnTuT. Reveals Snapdragon 865+, along with 16 GB of RAM

Until recently, Chinese Lenovo confirmed the arrival of a smartphone from the gaming segment Legion, whose performance will take place in July. The proof that we will see him soon is his discovery on the platform AnTuTu. In the benchmark, this smartphone achieves more than 648 000 points.

AnTuTu Benchmark it also reveals the components used. The performance is in charge of an unimaginable, absolutely top processor Snapdragon 865 +. The same chipset will be included in the gaming smartphone ASUS ROG Phone 3, scheduled for launch on July 22. 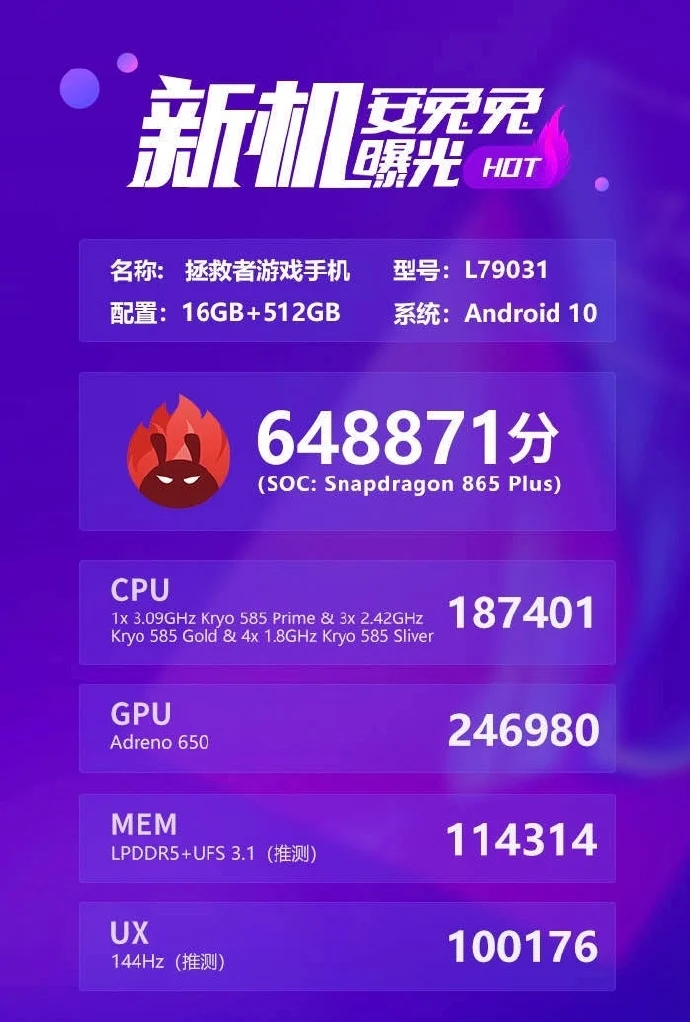 It is so known that the "plus" version Snapdragon 865 is actually a kind of pitted version of the basic version, which powers the vast majority of flagships from the first half of this year.

Variant with designation Lenovo L79031, which appeared in the benchmark, has 16 GB of RAM type LPDDR5 and 512 GB of internal storage UFS type 3.1. In the memory speed test, the phone received 114 314 points.

According to further information, at Lenovo Legion the operating system is running Android 10. It is said that there will also be a user superstructure, known as Legion UI.

We expect it to bring many gaming features, while leaving many similarities with pure Android, which will definitely please more potential applicants. As for the display, it should have a resolution 1080 x 2340 pixels and a refresh rate of up to 144 Hz.

In the UX test, the device gained 100 176 points. The total recorded score is 648 871 pointswhich is a bit higher than in the case of the competitor ASUS ROG Phone 3which has been rated 646 310 points.

Finally, we mention the use a pair of USB-C ports, at least one of which is used to charge a battery with a capacity of 4 000 mAh. It won't be missing either sliding mechanism for the front, 20 MPx "Selfie" camera, along with 64 MPx main sensor on the back.

This is what the company does too 16 MPx ultra wide angle camera. The security feature in the form of a fingerprint scanner is located directly below the display, which means that the screen is most likely of the type OLED.

Passionate gamers can also look forward to stereo speakers for an even better experience of playing and consuming media content. However, the absolute icing on the cake should be lightning-fast charging, achieving extreme performance 90 W. There is absolutely no need for an immediate immediate charge of the integrated battery.

Realme Watch will receive 20 new dial designs in the update. You can also name 6 of them