[REVIEW] Laotie The FX150 is a powerful and high-quality electric fatbike, but it does not use its full potential

Low position of the handlebars

Mark Laotie is not new to the field of electromobility, and their scooters and bicycles are well-known thanks to the merchant Banggood. We tested their model Laotie FX150, which is popular among fatbikes. It has several strengths, but there are also more negative ones, led by the weak 18 A controller. However, its construction is at a very high level and it also has a good-looking design.

We really liked the used high-quality Panaracer tires, the comfort when driving thanks to shock absorption even with the thick tires, so it won't be for Laotie FX150 problem absolutely no terrain. The folding mechanism is of course another plus, as well as the removable battery, which you can charge anywhere.

You can buy it directly in the EU warehouse

If you are interested in this electric fatbike, you can buy it from the dealer Banggood Directly in European stock, where it is now also available with a favorable coupon.

Composition and necessary adjustment at the beginning

Laotie The FX150 arrived safely packaged and without any defects or broken parts. Beginners will certainly be pleased with the comprehensive manual, which describes in detail and in the form of pictures how to assemble the entire body. It took us only a few minutes to assemble and everything was in place as it should be. In the package you will also find a lock, an axle for storing the wheel, a 3 A charger with an EU terminal and a set of keys for assembly.

After the first few rides, we immediately noticed the knocking. At first we thought it was the front fork or the handlebars and pulled all the screws we could but it turned out to be the battery in the frame. It has shorter dimensions than the space inside the frame and thus has clearance. We solved this problem with a piece of foil that we put on the front of the battery.

Therefore, we recommend that every new owner take this measure, backing the battery in the frame with foil, because it could be damaged in this way. On the other hand, it is very unfortunate that the manufacturer put the bike on sale in this way.

Anyone can find out the technical parameters on the seller's website, but what is important for the customer is clearly the feeling of driving. Laotie The FX150 has its big disadvantage, namely a too long stem (approx. 90 mm) and relatively short handlebars. The Chinese did not quite hit the dimensions for us Europeans. The position on the bike is quite unnatural, and due to the long stem, we were in a position too low, or in other words, far in front with our hands, which is really uncomfortable after a long ride and later you can feel the back. 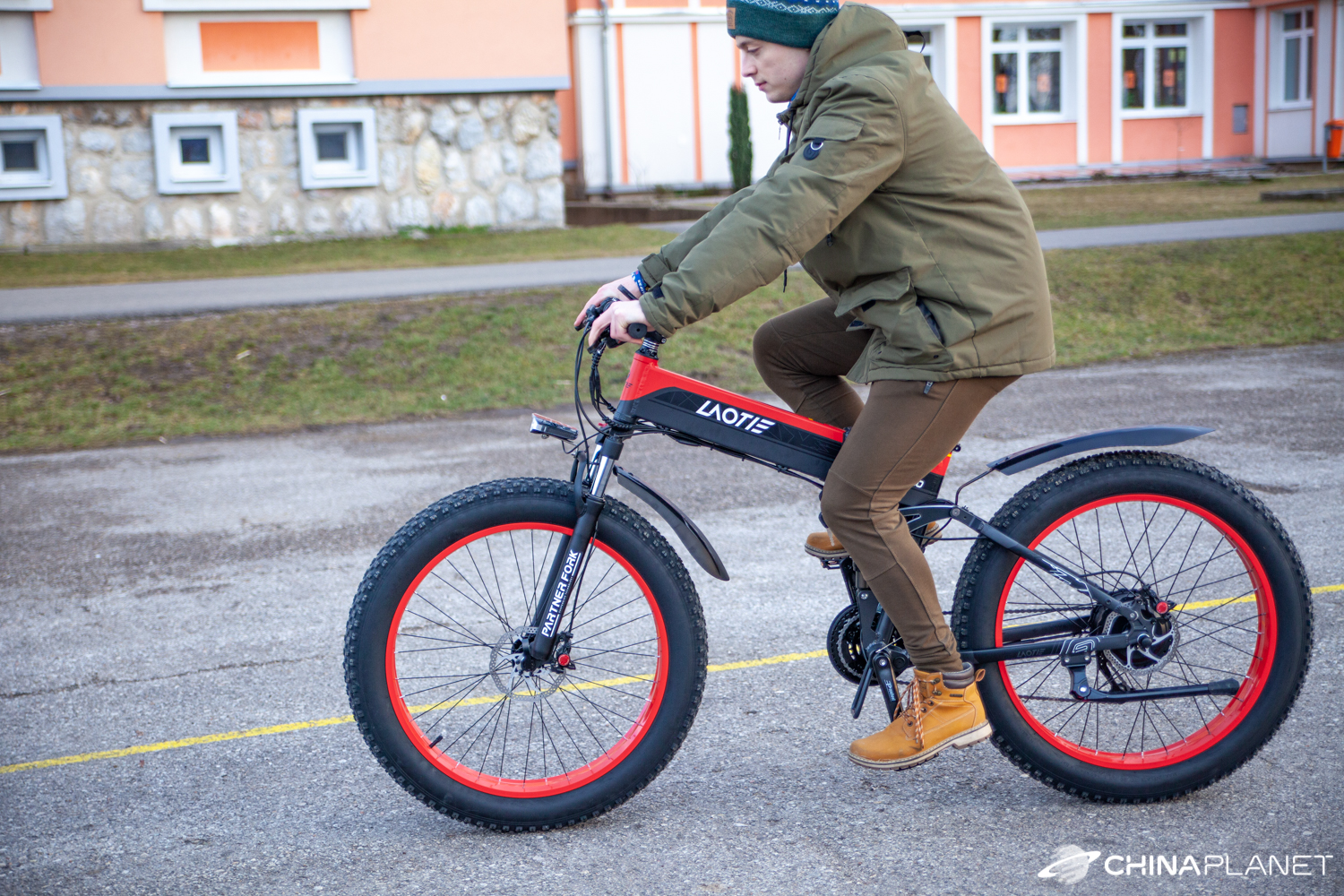 However, it can be solved with a shorter stem, which can be bought at any regular bicycle shop, which we definitely recommend. The handlebar grips are also not the best, and the one on the right side is a bit narrower because of the throttle, you'll have to get used to it. It would also be better to get wider handlebars with a higher lift. 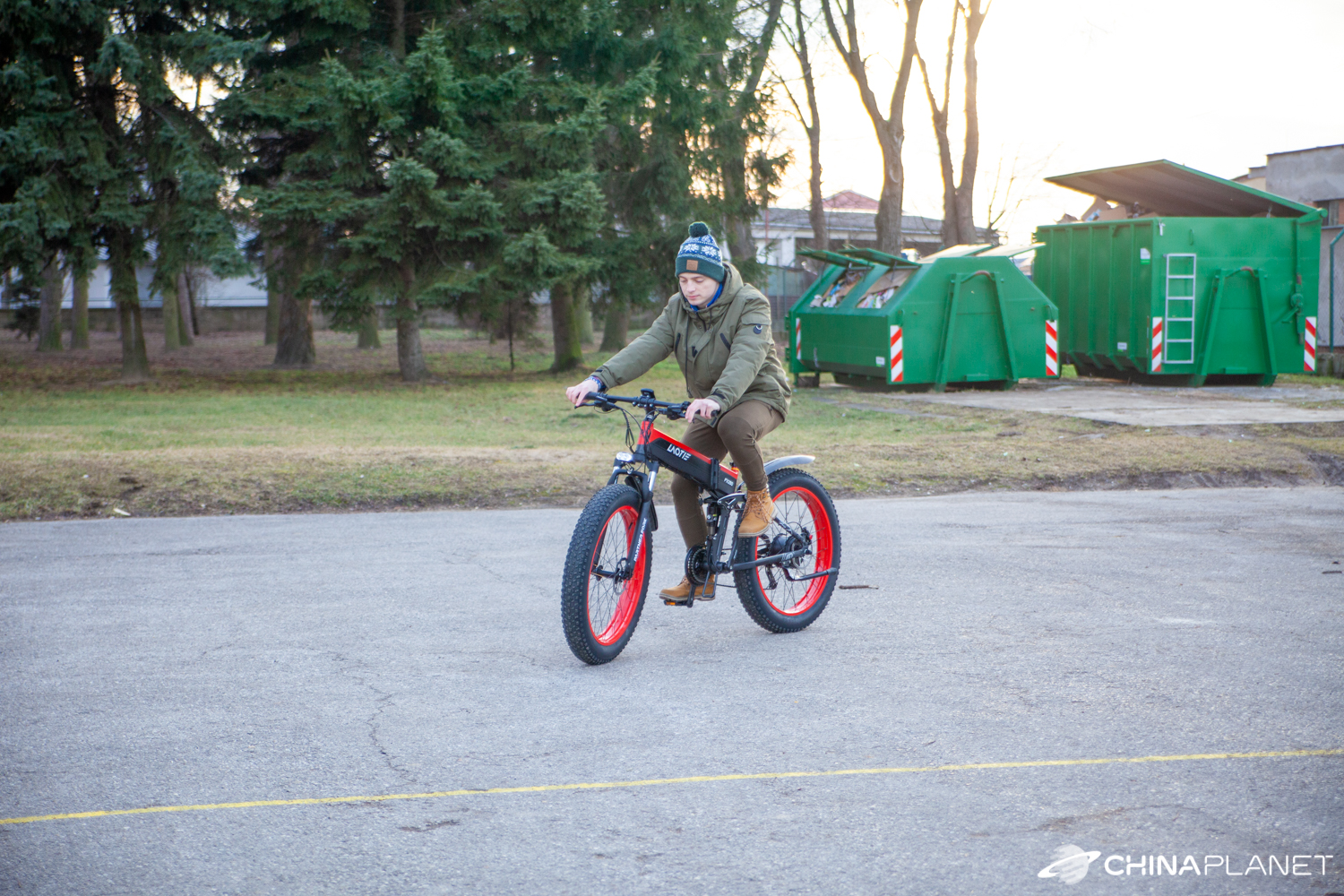 The tires hold the road very well, and thanks to their thickness, we were not afraid to tackle bumps more aggressively in more demanding terrain. The brakes work very well and we really have nothing to complain about. 27 speeds and a transmission from Shimano is enough for pedaling uphill but also for faster driving. 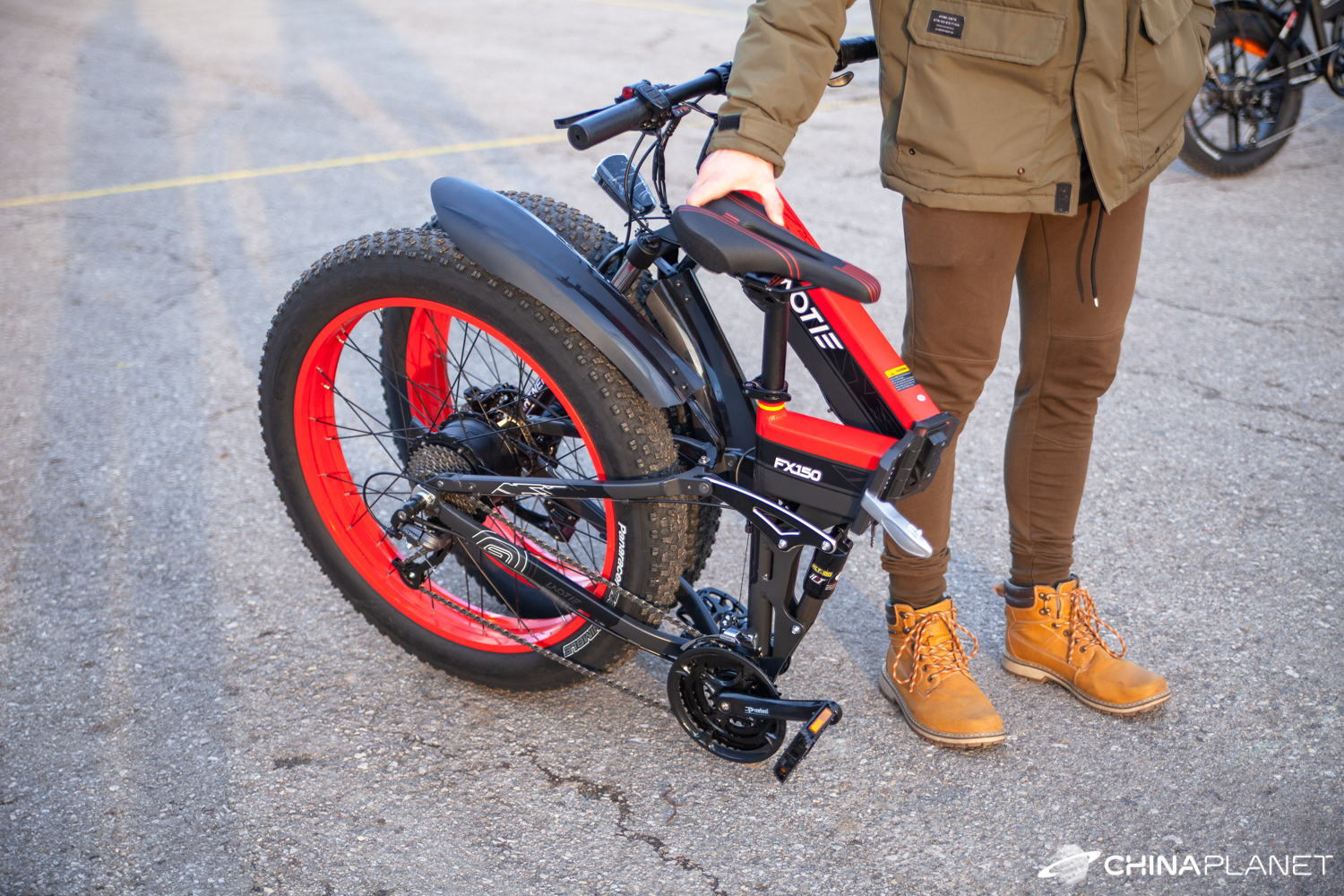 Three driving modes are available – assistance, electric and manual. The bike has no torque sensor, so the assistance from the electric motor is not completely smooth, but it's not terrible. The purely electric drive is activated by turning the throttle on the handlebars, which limits the width of the grip and does not hold the handle the best. 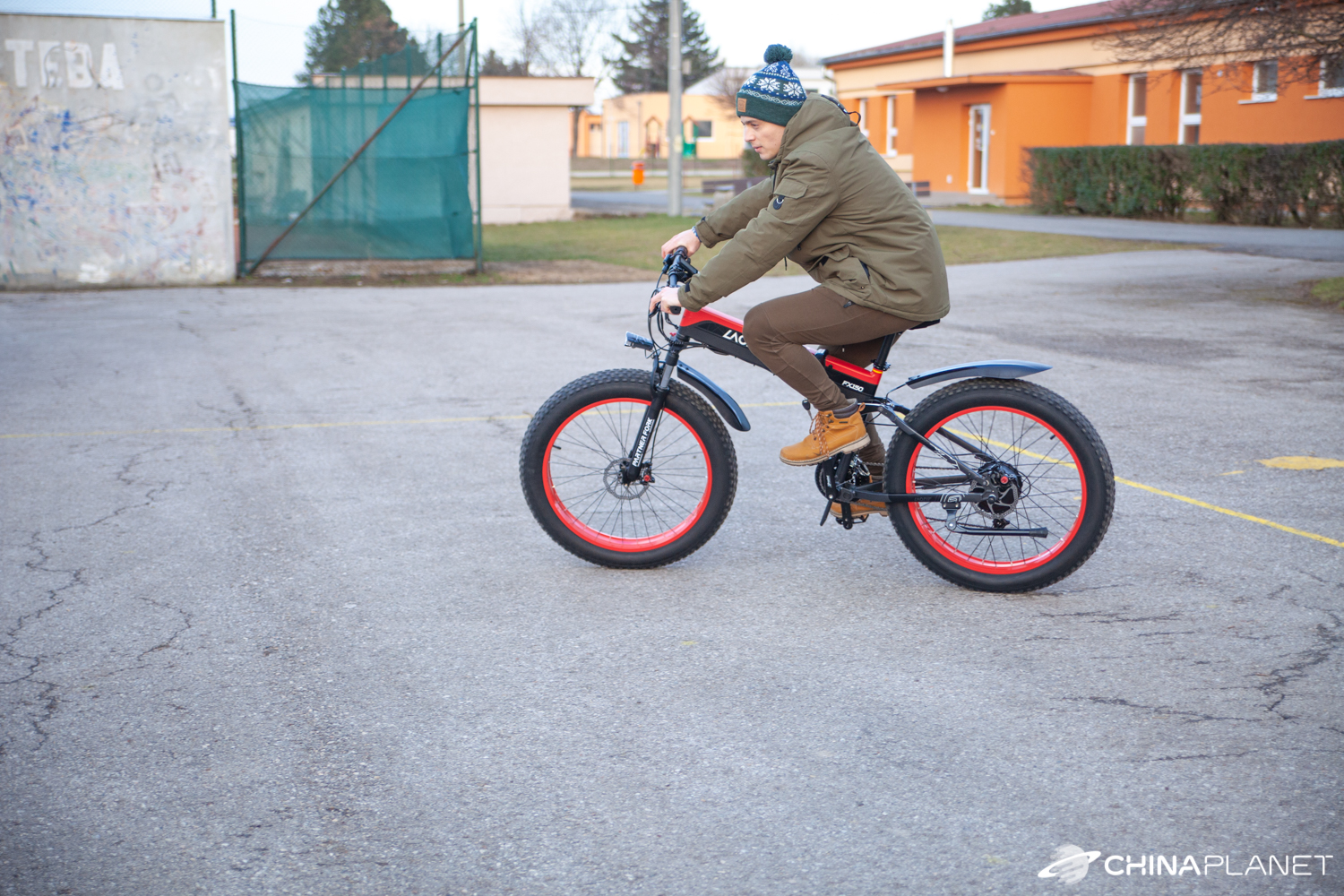 The seat is not the softest, it is more of a sportier piece, but this is more of a personal preference, as each rider prefers something different. We rate the front light as average, for frequent night cycling we would definitely replace it, and the minus is the missing rear light, a rear reflective light, which is not here, would also be sufficient.

The aforementioned three driving modes are available, which of course affect the range itself. With the assistance mode, we reached a range of around 50 kilometers. The battery has a voltage of 100 V at 54,6%. Testing the range on such an electric bicycle is very difficult and distorting, because it depends on the driving conditions, the difficulty of the terrain, the strength of the gusting wind, the rider's weight, etc. Your mileage numbers may therefore vary significantly. 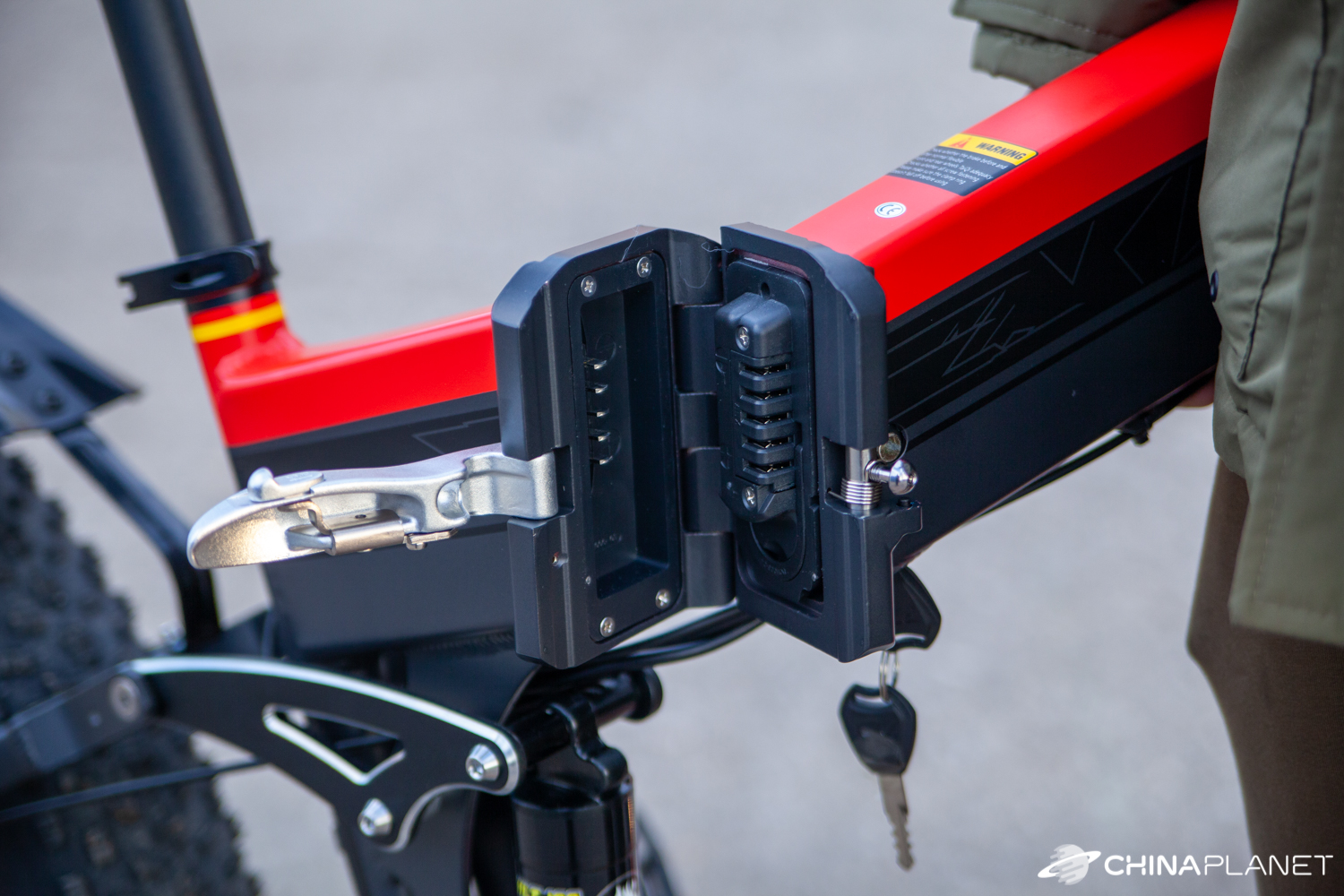 Appearance is certainly important to you when choosing a bike. He has for us Laotie FX150 really nice design and there is a yellow version to choose from in addition to the red version. The red / yellow color element is also on the wheel frame and in combination with the black body this design is really successful. It is also possible to notice the used quality components such as Zoom brakes, Shimano transmission or Japanese tires. 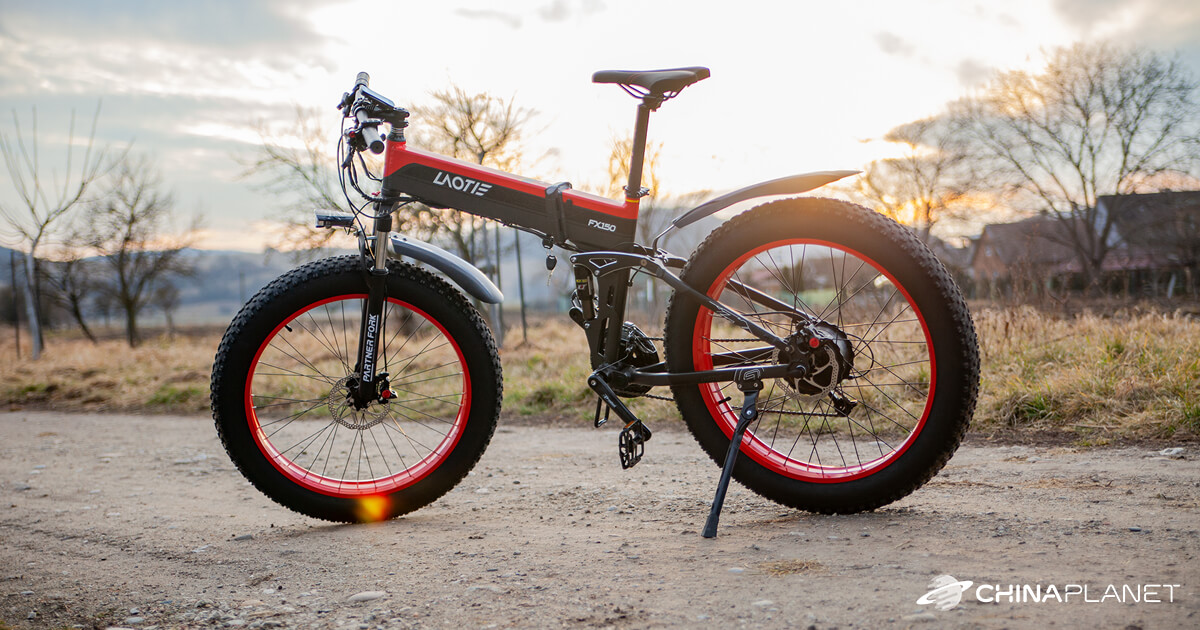 In the rear wheel there is a 1500 W motor from the Chinese brand Bafang, which is already well-known in the electric world. So we can count on quality and consistent performance, which was also confirmed in our quick test. When you look at this machine, you will definitely notice the massive stand, and with such a large bike, this is a must. The rear shock absorber cannot be adjusted in any way and the front fork is lockable. If you are heavier than 80-85 kg, it will probably be necessary to think about a stiffer rear shock absorber, because it is suitable for a maximum of 80 kg, which was enough for us. 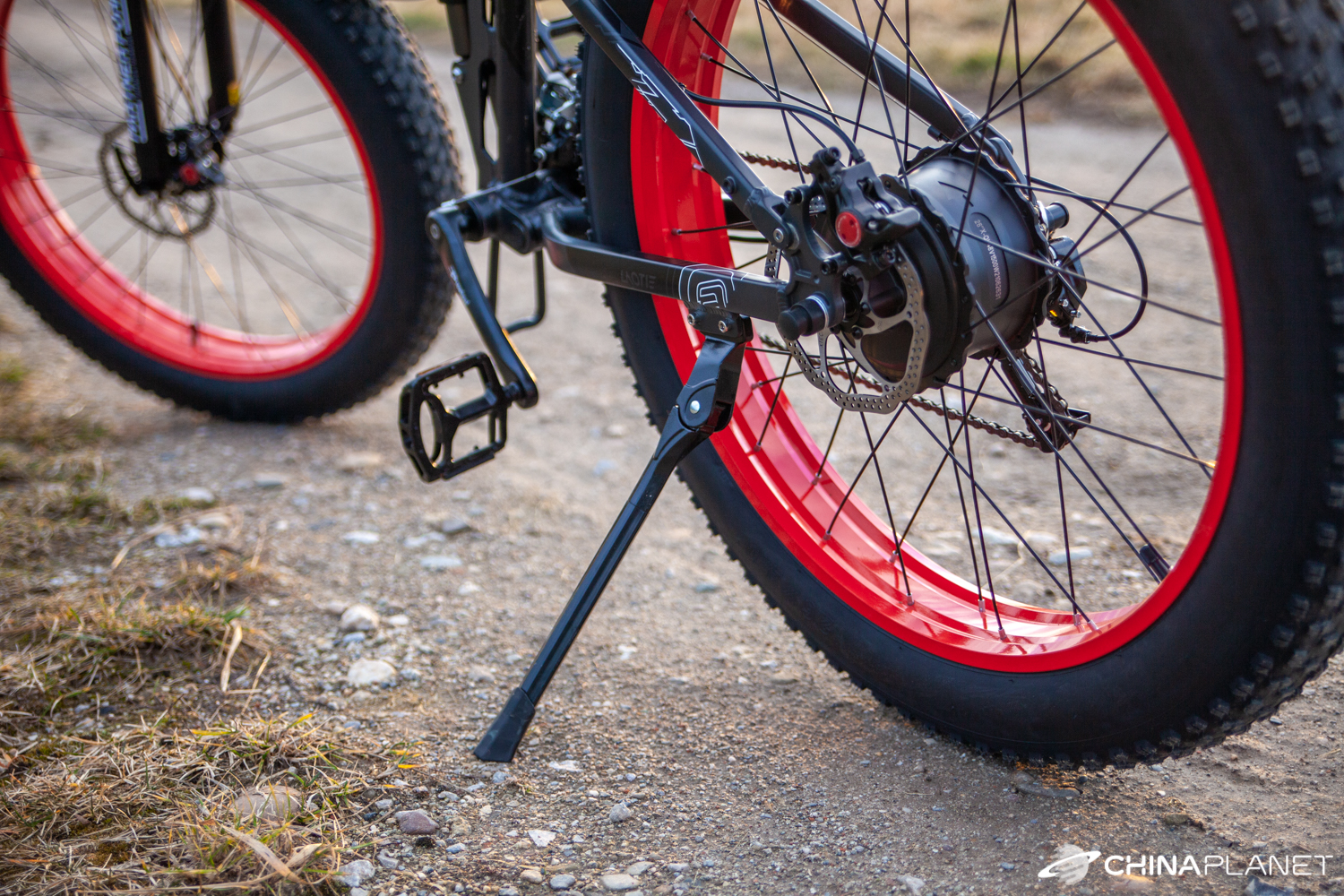 The minus that we have to mention is definitely the weak 18 A controller due to the unused potential of the electric motor. When fully charged, the battery has a voltage of 54,6 V, which with an 18 A controller gives us a total power of 982,8 W. That is the maximum that the bike can handle, so there is still more than 500 W in reserve. We still managed to top out at 45km/h unaided (rider was 80kg) so it's not a terrible thing, but we could have had a slightly bigger beast out of this bike. 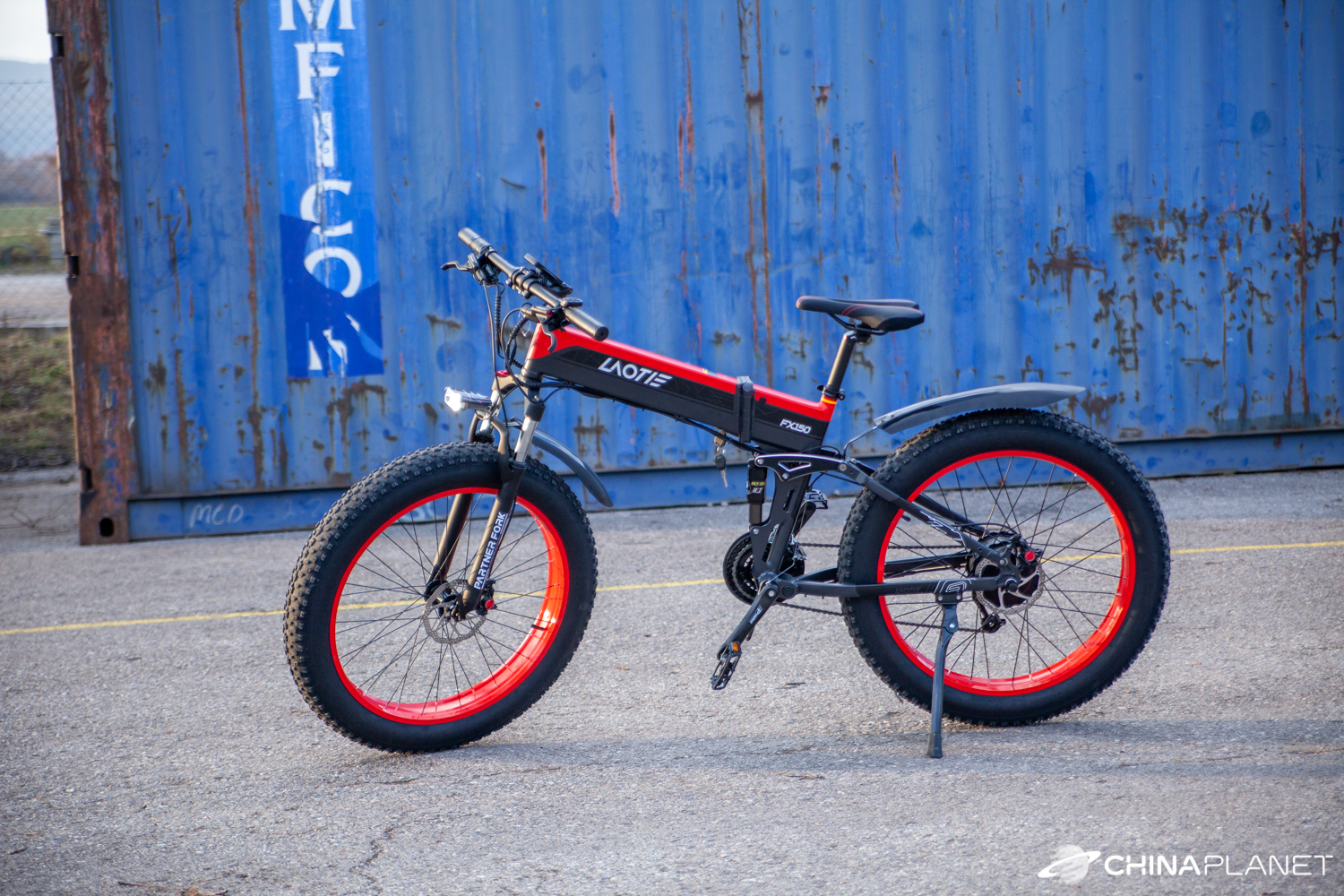 The folding system is very good and also has a traditional fixed mount which works well. The battery can be removed from the frame by opening the fuse with a key from the bottom of the frame. We were also pleased with the fact that the charging port is located directly in the frame in the part where the controller is, so it works independently without a battery. The frame contains a static stand, which can then be used to lean the entire structure on the ground when folded. 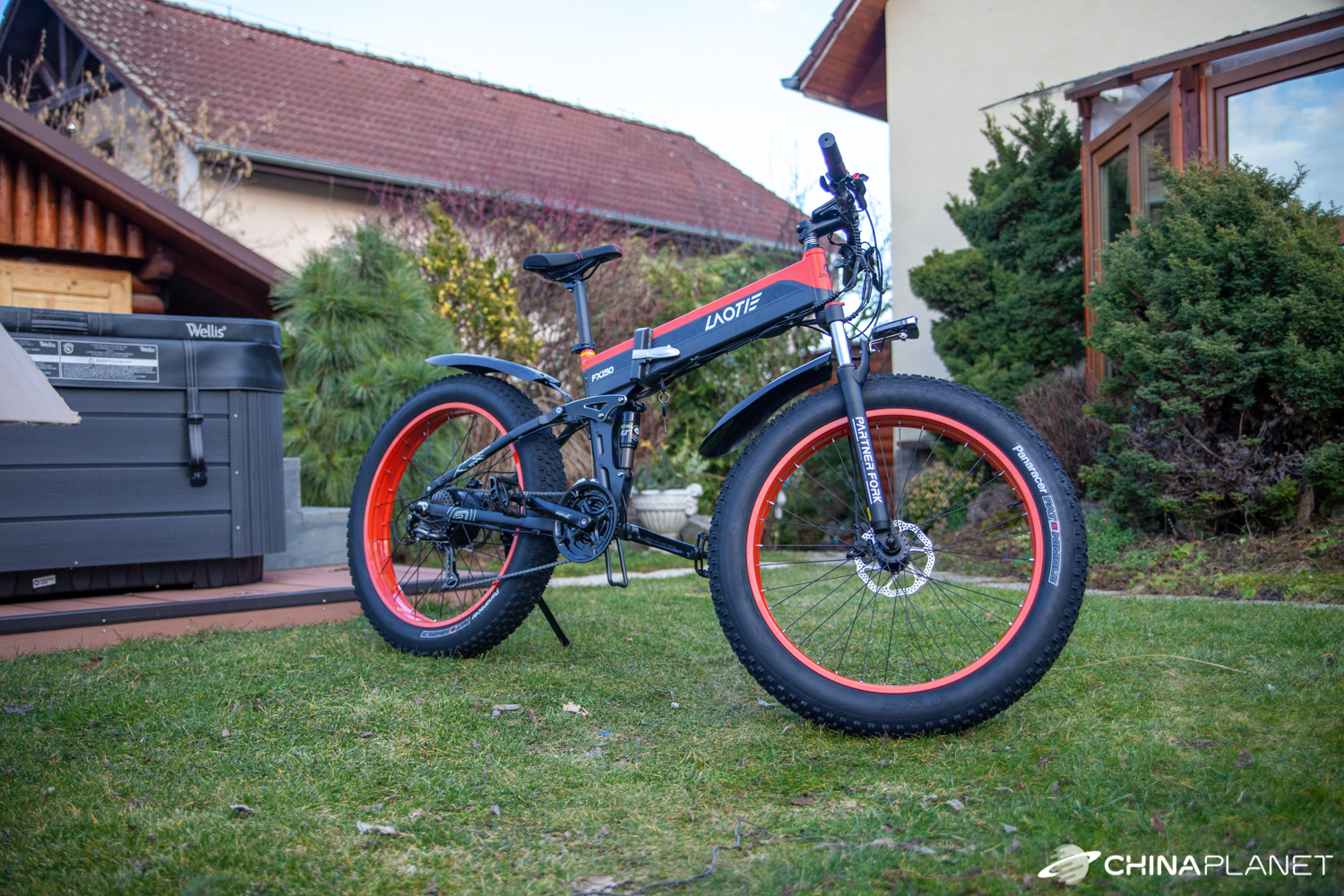 The backlit LCD display shows everything in sufficiently large font and also contains a secret menu for setting various parameters, according to which you will surely adapt the ride to your exact needs. 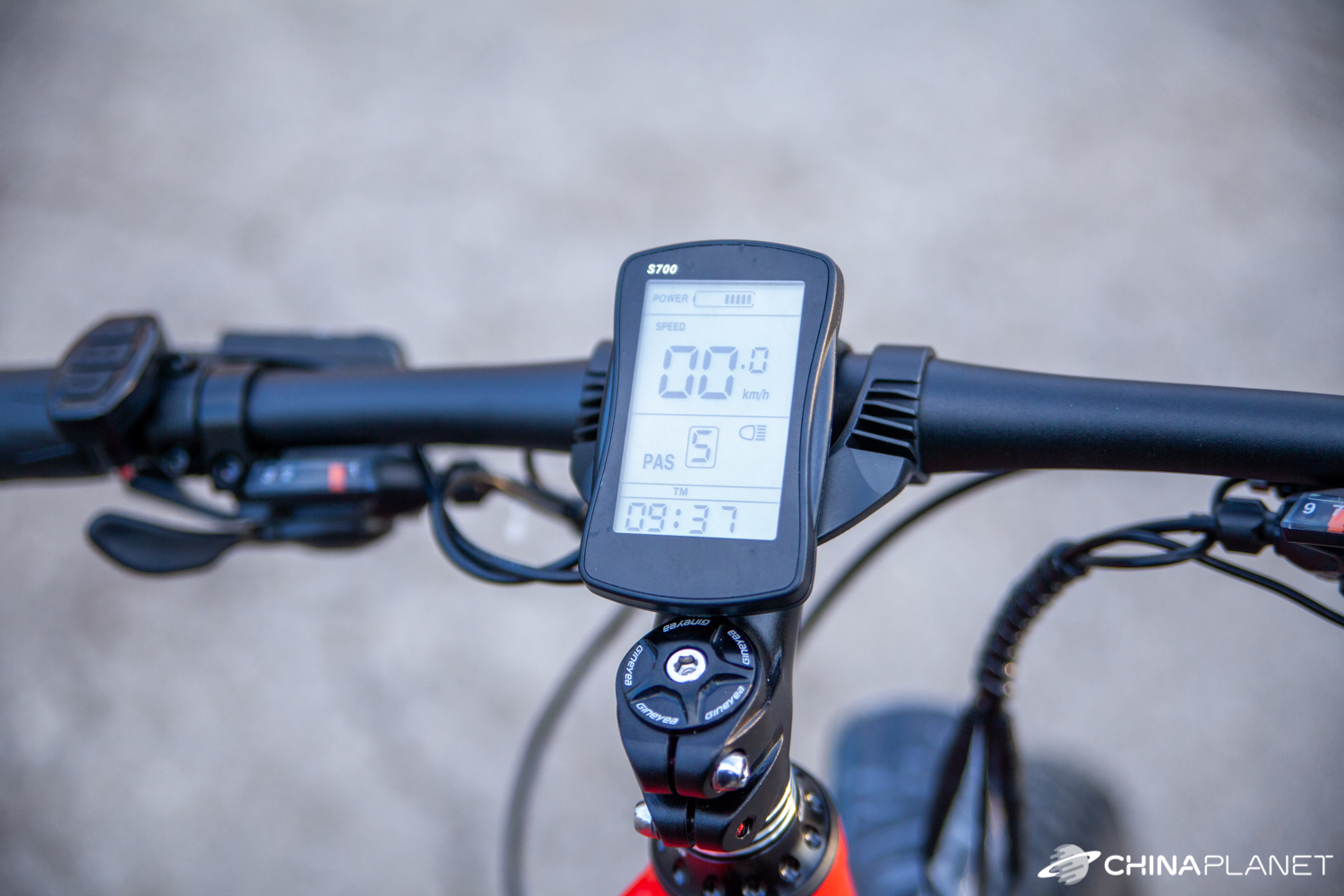 Electric bicycle from Laotie impresses compared to the competition, especially with extra quality tires straight from the factory. Thick 4-inch tires from the Japanese brand Panaracer are used, which even have kevlar reinforcement inside the frame, or heel. Thanks to this, they last much longer and none of the competitors offers such a standard.

The grabs are shaped for the best possible tilting properties and can hold perfectly even in turns. Of course, maneuvers with such thick tires are not the most comfortable, but high-quality Panaracer tires do what they can to improve it. Their quality is also indicated by the selling price, one coat is sold at local retailers for up to €80. 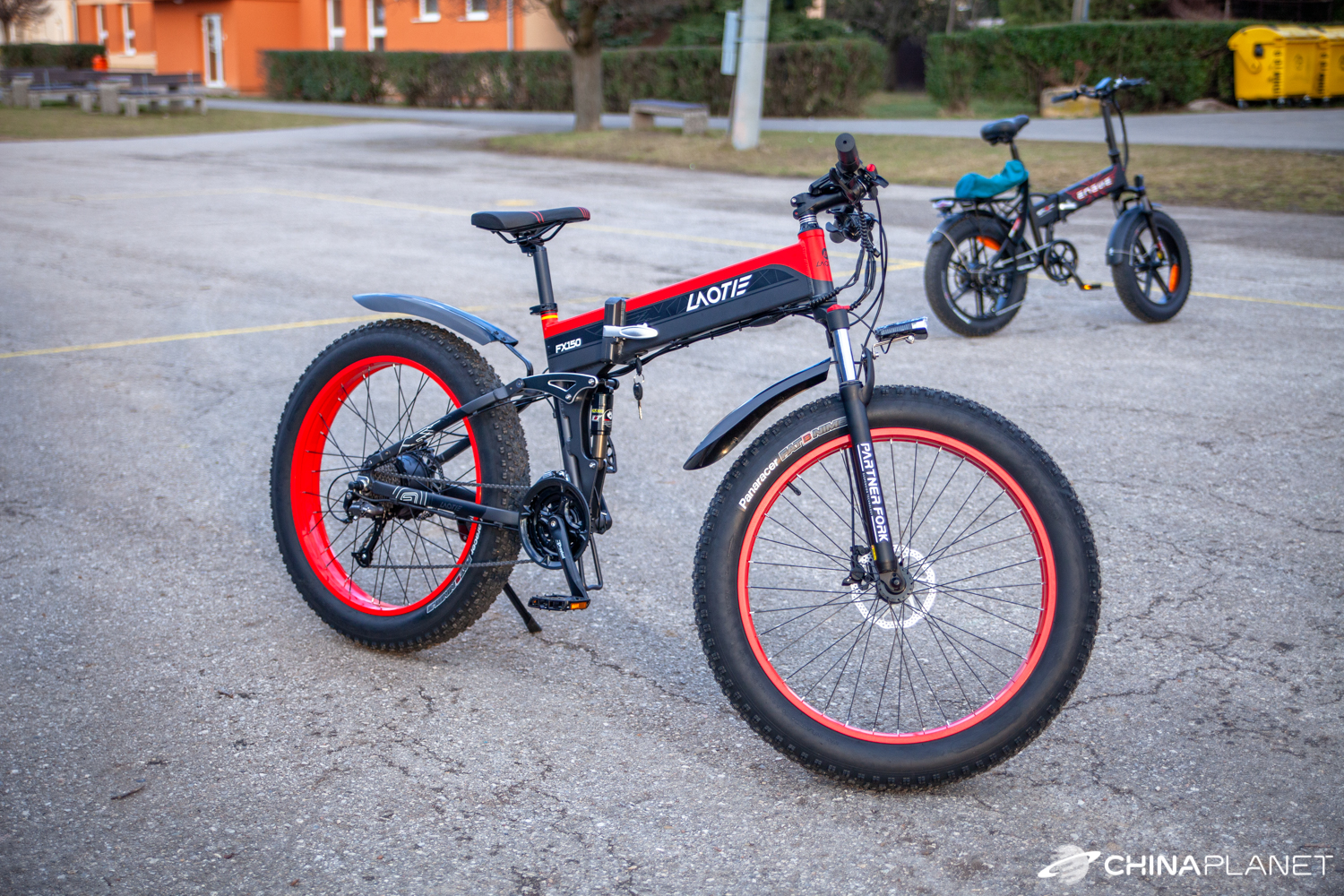 The presence of branded Zoom hydraulic brakes with 160 mm discs will also please you. For us, the brakes on this bike are at a very good level and held us in every situation.

Electric bicycle Laotie The FX150 surprised us with the used components from quality brands and also with its frame design. It is one of the higher quality pieces, but it also has its flaws, like a weak 18 A controller or a too long stem with low handlebars. We must highlight the high-quality Panaracer tires, the performance (even if not XNUMX% used) and the speed of the bike. Since it is a folding bike, it is definitely not suitable for rough downhill terrain and is more suitable for easy offroad, where the folding mechanism would not suffer from bumps or jumps. 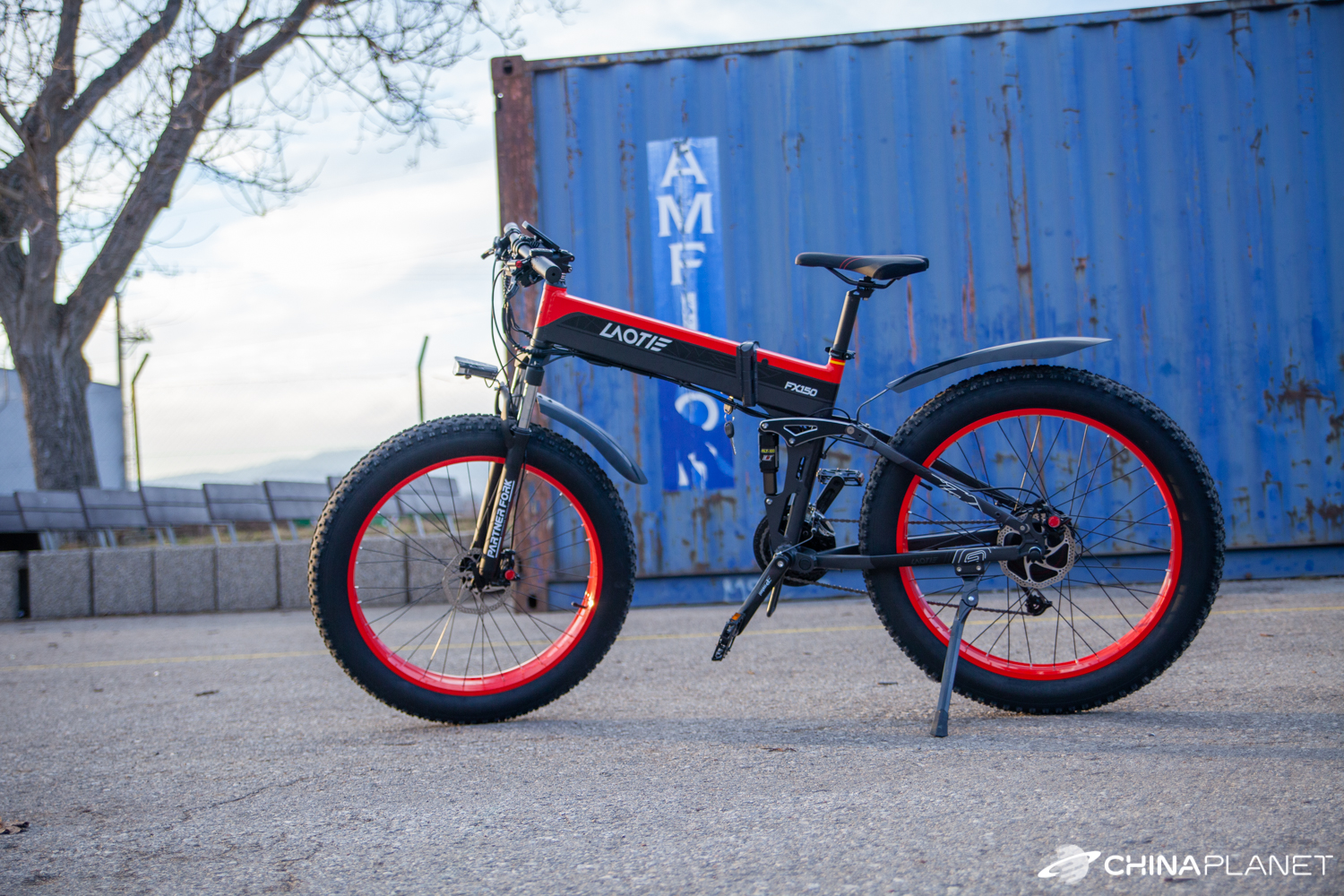 Compared to its competitors, this is probably the most successful electric fatbike and if you are thinking about one from China, definitely choose Laotie FX150.

Hcalory is a smaller 15-liter portable refrigerator for the car with 12 V support, an application and a price of up to €150