HIMO L2 Max for a great price of 289,99 € in the EU warehouse. It has a 350 W motor, EU certification and quality workmanship

comfortable ride thanks to wide tires

special model designation "Max", as the scooter is almost identical to the older L2 model

Not so long ago we brought you a review of the first electric scooter from the HIMO brand, model L2. This time the manufacturer released a revised version under the name HIMO L2 Max. Despite the adjective Max, however, it is not a bigger scooter.

In our short review, you will find out what the difference is between the older and the new version of the scooter, how we rode during the winter, what the range is on one charge and much more.

The electric scooter HIMO L2 Max is included in the offer of our international partner Geekbuying. Thanks to our cooperation with this store, we also bring you a discount coupon to get an even better price. Will be happy to deliver from European warehouse, so you won't have to wait long for the scooter and you can prepare for the season in time. 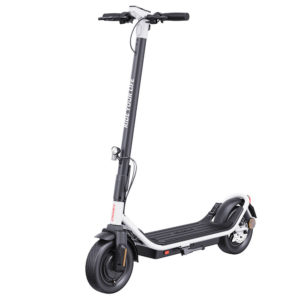 I want it
You are shopping for the first time at Geekbuying? See instructions!

If you compare these parameters with the specifications of the previous version of HIMO L2, you will not find any difference. So what makes the new Max model better? Has the manufacturer issued an identical scooter with a new designation?

At first glance, we were also surprised and we could not find any difference. But after unpacking and testing, we noticed a difference. Read on to find out what's changed.

The contents of the package have not changed

The packaging of the scooter is exactly the same as the HIMO L2 model. Not even the model designation on the box has changed. The only difference is the inscription HIMO L2 Max on the side, along with a sticker about European SGS certification. This certification is one of the two differences between the old and the new version.

The HIMO L2 Max scooter is thus officially certified for Europe, unlike the older model. However, nothing has changed in the packaging. The scooter is stored in a box folded with the handlebars and headlight disconnected. It is protected on each side by cardboard reinforcements and the entire scooter is still wrapped in nylon foil. 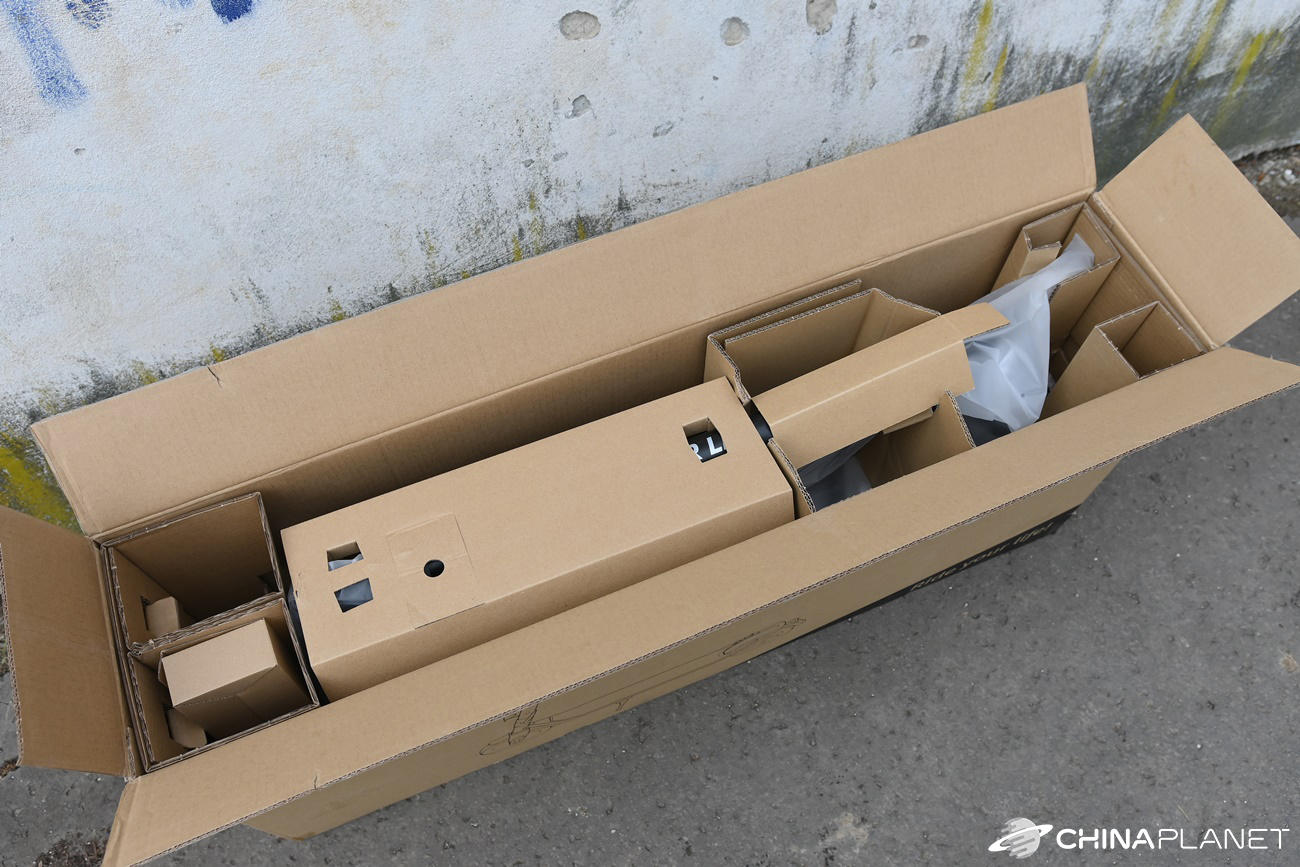 Prior to first use, the handlebars must be fastened with four screws. Both the Allen key and the screws are in a small bag with the operating instructions. A small bonus is a compact hand pump. We recommend using an electric compressor for faster wheel inflation, as the tires have been significantly underinflated. 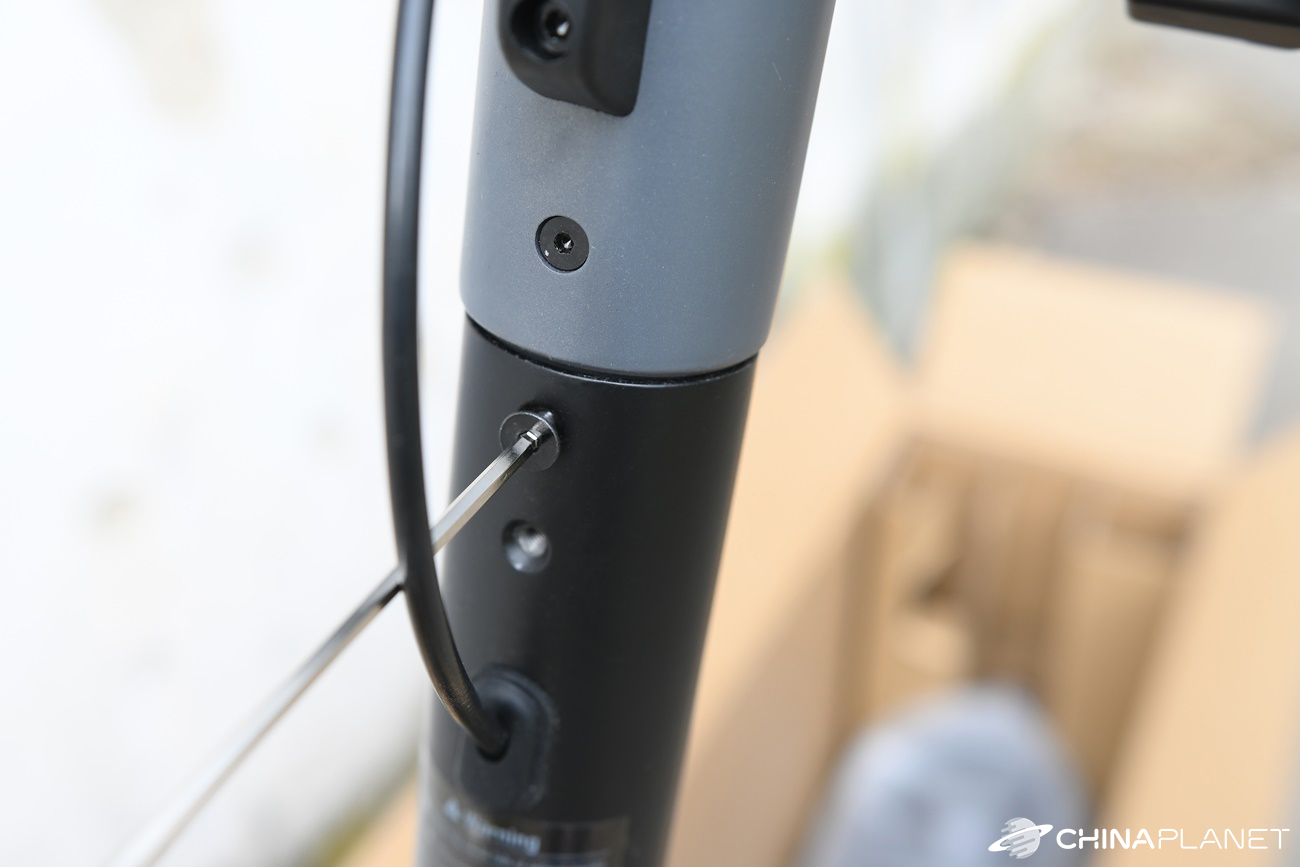 The second difference, which we noticed only during the assembly of the scooter, is the improved tilting mechanism. One fuse in the form of a metal pin was added to it. It is easily operated manually using a small ball in the front. When tilting or unfolding the scooter, it is necessary to pull this pin upwards, otherwise the joint of the control rod will be secured and you will not move it. 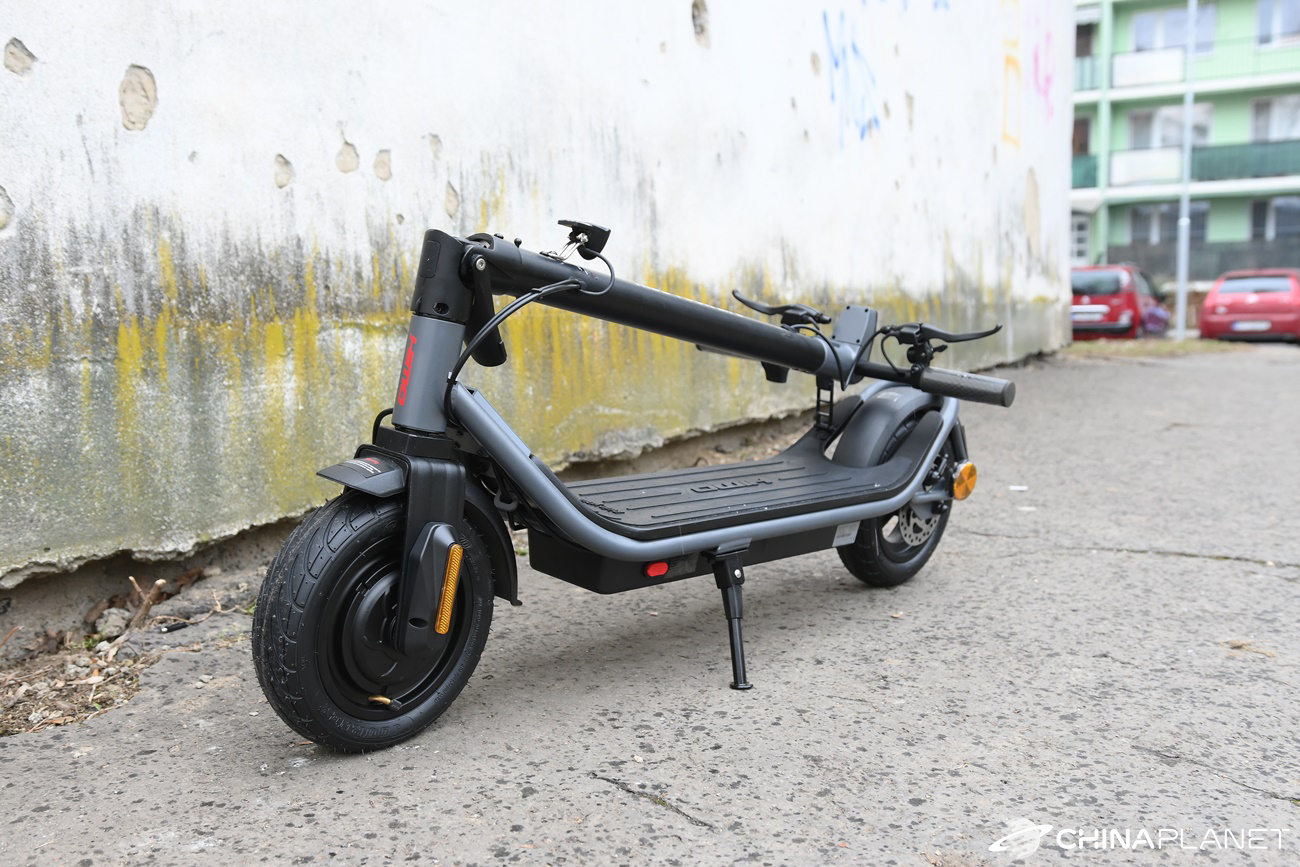 We commend this additional security feature. When testing an older version of the scooter, it happened to us that we did not secure the lever of the folding mechanism sufficiently and during the ride the handlebars in our joint came loose. It can't happen with this pin that fits in the middle of the joint. 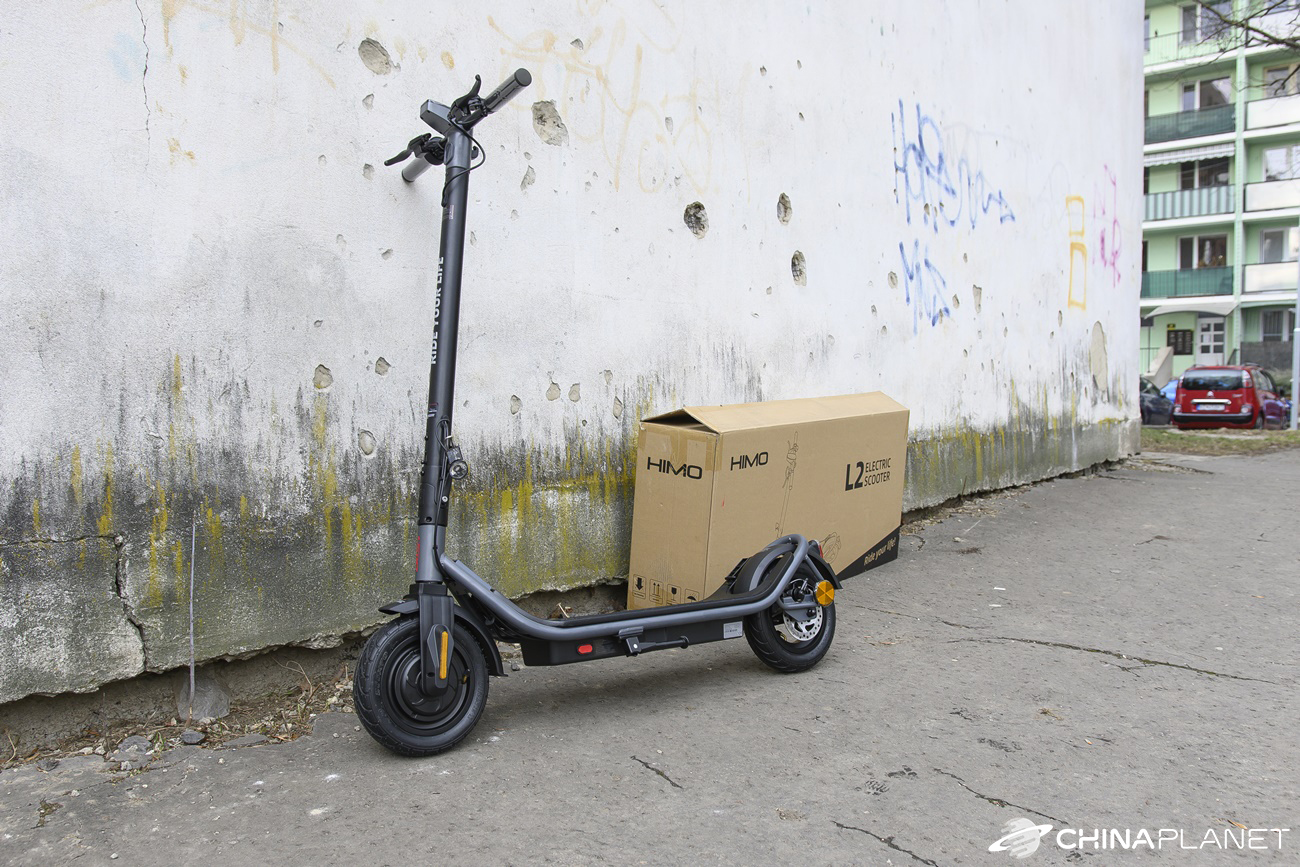 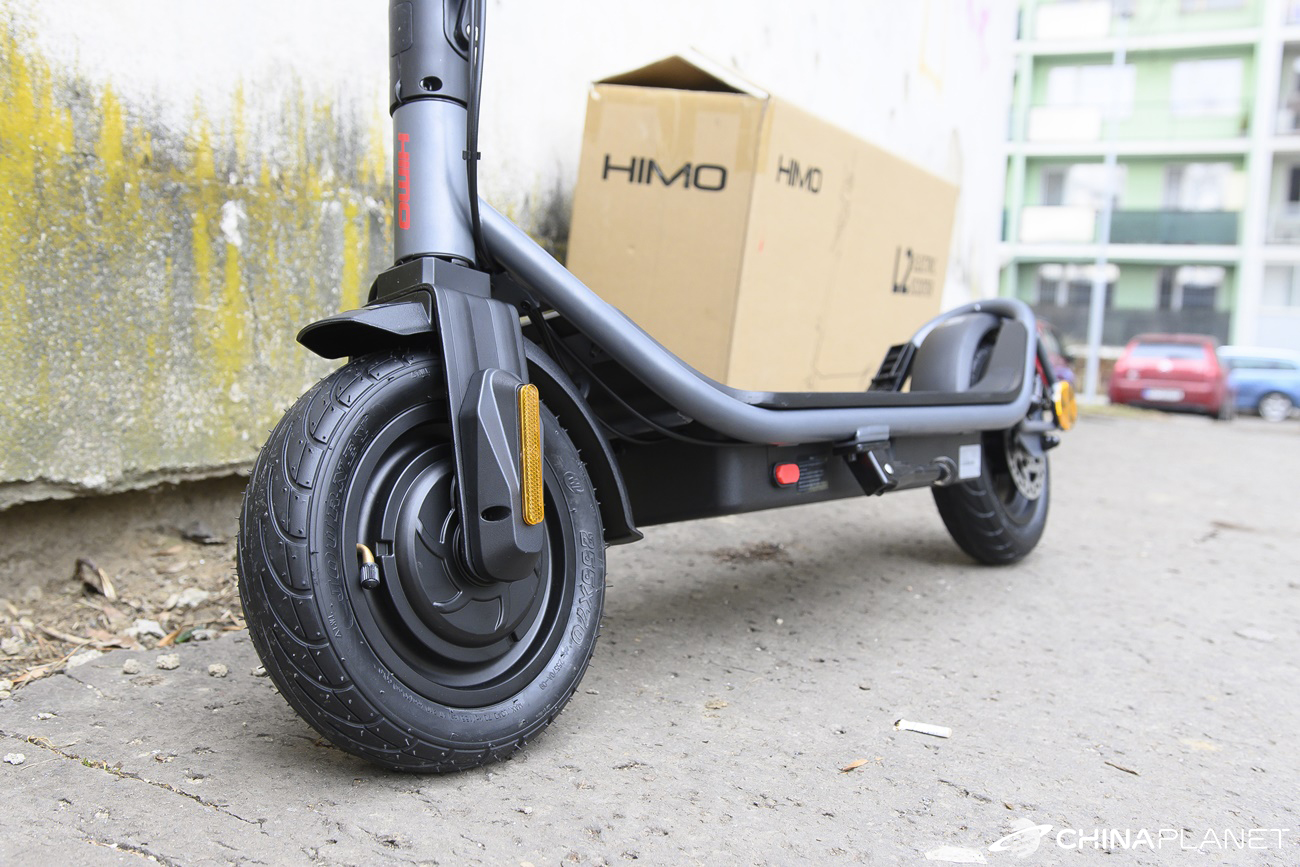 The scooter is not sprung, but thanks to the wide and large, 10 ″ tires, the ride is very comfortable. Their size is 255 x 70. Since we also own the popular electric scooter Xiaomi Mi Scooter Pro, which we use as our "daily driver", we must recognize that the HIMO L2 Max is much more comfortable and absorbs shocks and bumps much better.

Range on one charge

Many people are especially interested in a single charge. The HIMO L2 Max scooter received a 36 V 10.4 Ah battery, which consists of 40 18650 cells. The manufacturer states a range of 35 km on a single charge, but do not forget the footnote, which informs about the conditions under which the manufacturer measured the range. In this case, it was a measurement at a constant speed of 15 km / h in eco mode at a load of 75 kg and an outdoor temperature of 25 ° C. 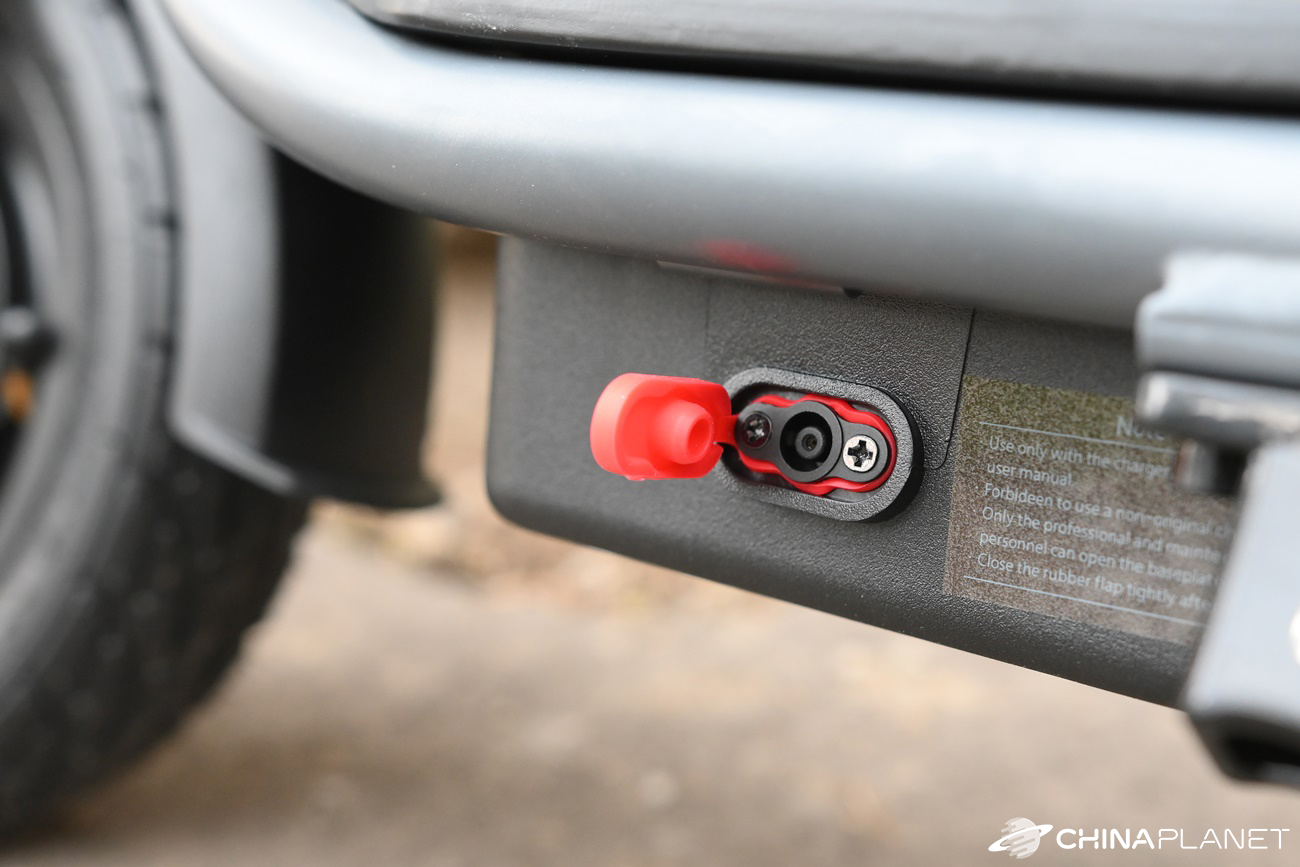 We tested the scooter weighing approximately 80 kg in the strongest mode at an outdoor temperature of 4 ° C. These are far from ideal conditions, especially with regard to the outside temperature. At low temperatures, the battery capacity decreases significantly faster. 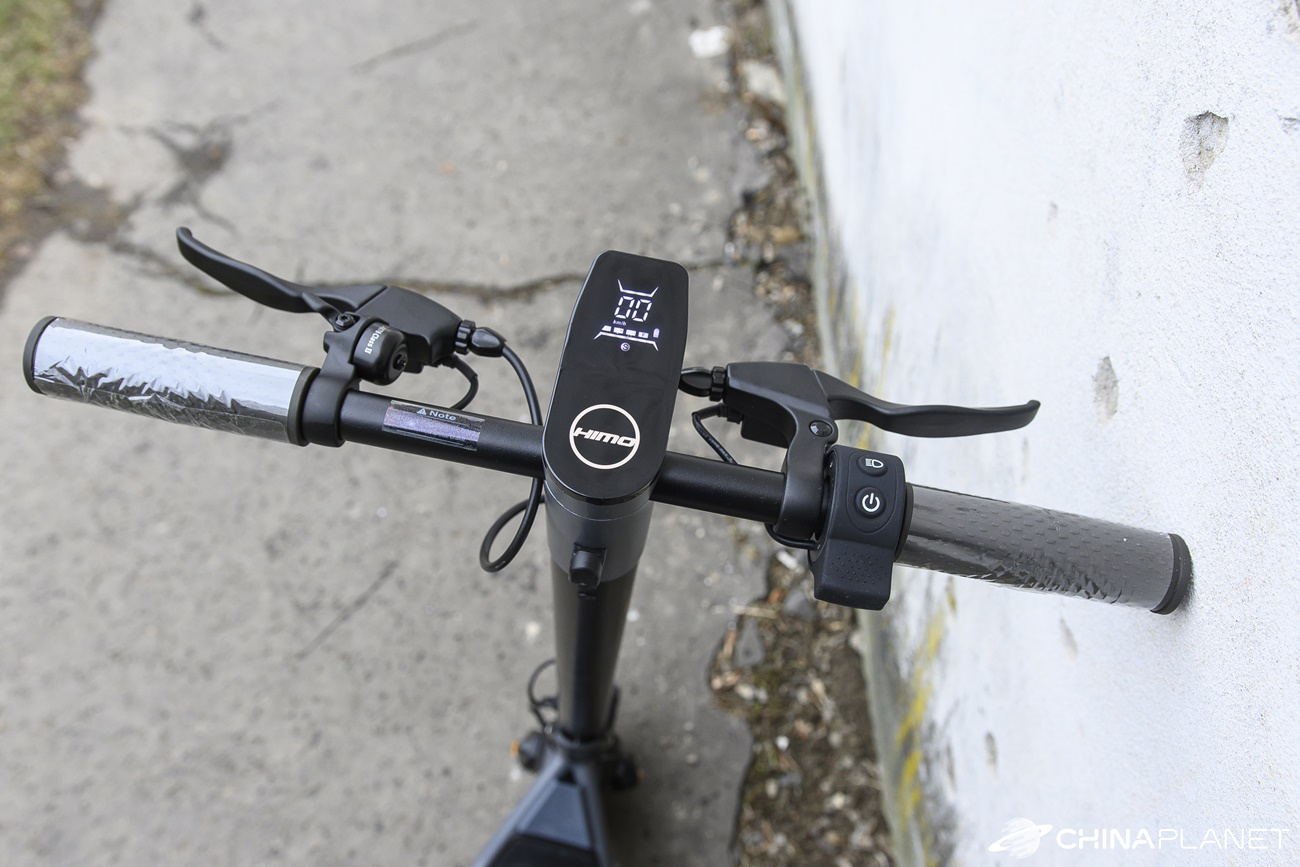 Already with the older model, we praised the size and strength of the scooter's construction itself. Fortunately, that has not changed, and even in this case it is a massive and solid scooter with a metal structure. It will please plenty of legroom, as well as a higher positioning of the handlebars, which makes the scooter ideal for taller figures. 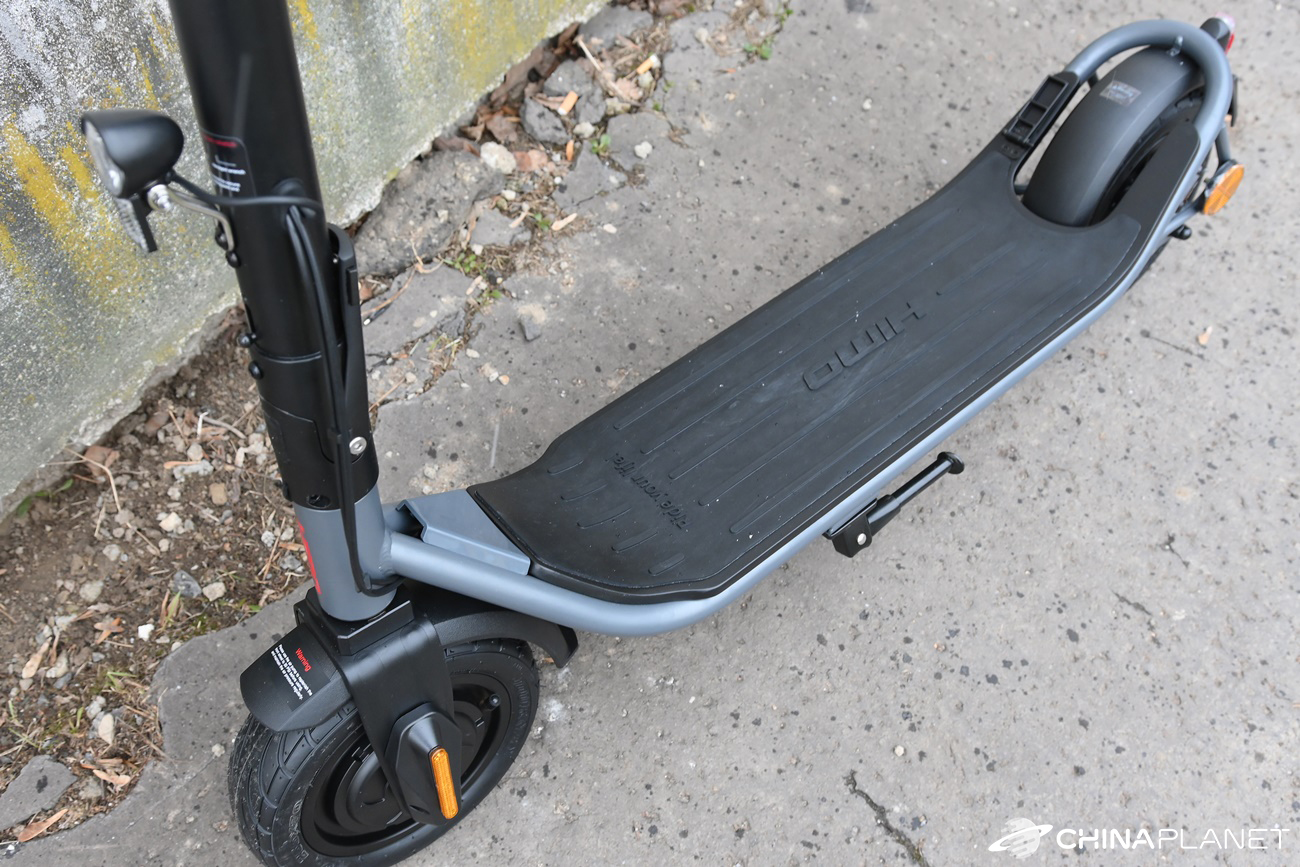 As far as safety is concerned, we have a pair of brakes here again. The left lever controls the rear disc brake, which is also assisted by electronic engine braking. If you only want to use the electric brake, the lever on the right side of the handlebars is used for this purpose. However, this brake is very weak, so we hardly used it. A mechanical disc brake could also be more effective, but it is enough.

The scooters also have side, orange reflectors and active front and rear lighting. The headlight is quite small, but since it's a scooter designed for the city, it's more about being visible to other road users. Light fulfills this purpose. However, if you want to drive in complete darkness without street lighting, we recommend purchasing an external light with higher power. 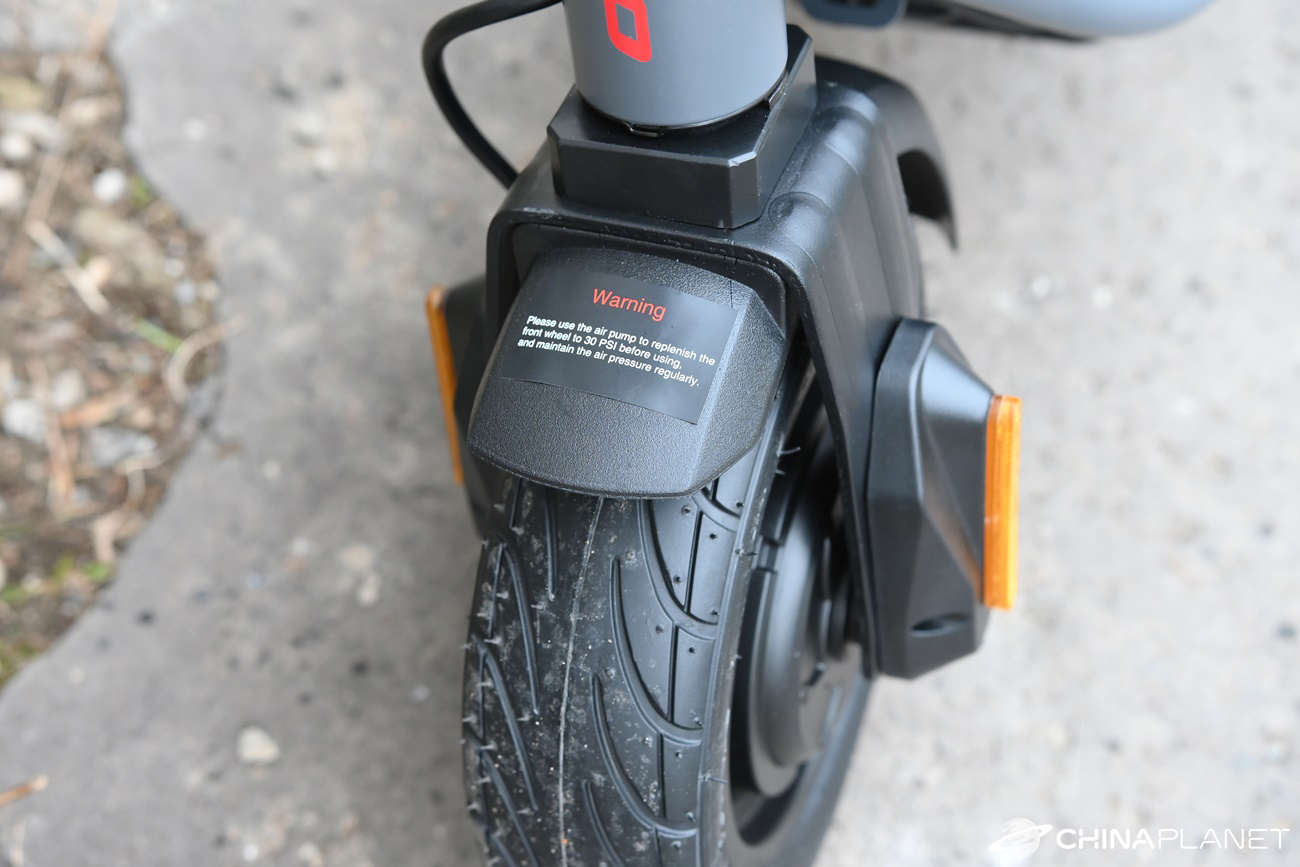 The display in the middle of the handlebars is relatively large and clear. However, it only shows the current speed, the battery status in the form of four divisions and the current mode. Too bad the manufacturer didn't improve the display in the form of more data that other scooters normally display. We would especially welcome the distance traveled and the battery level in percent.

Despite being a new model, the HIMO brand did not cover the cables that lead from the handlebar towards the flashlight on the outside at the bottom, just behind the front wheel. Although the cables do not protrude excessively into the space, we would still prefer to be covered or routed inside the structure. The small details can still be improved. 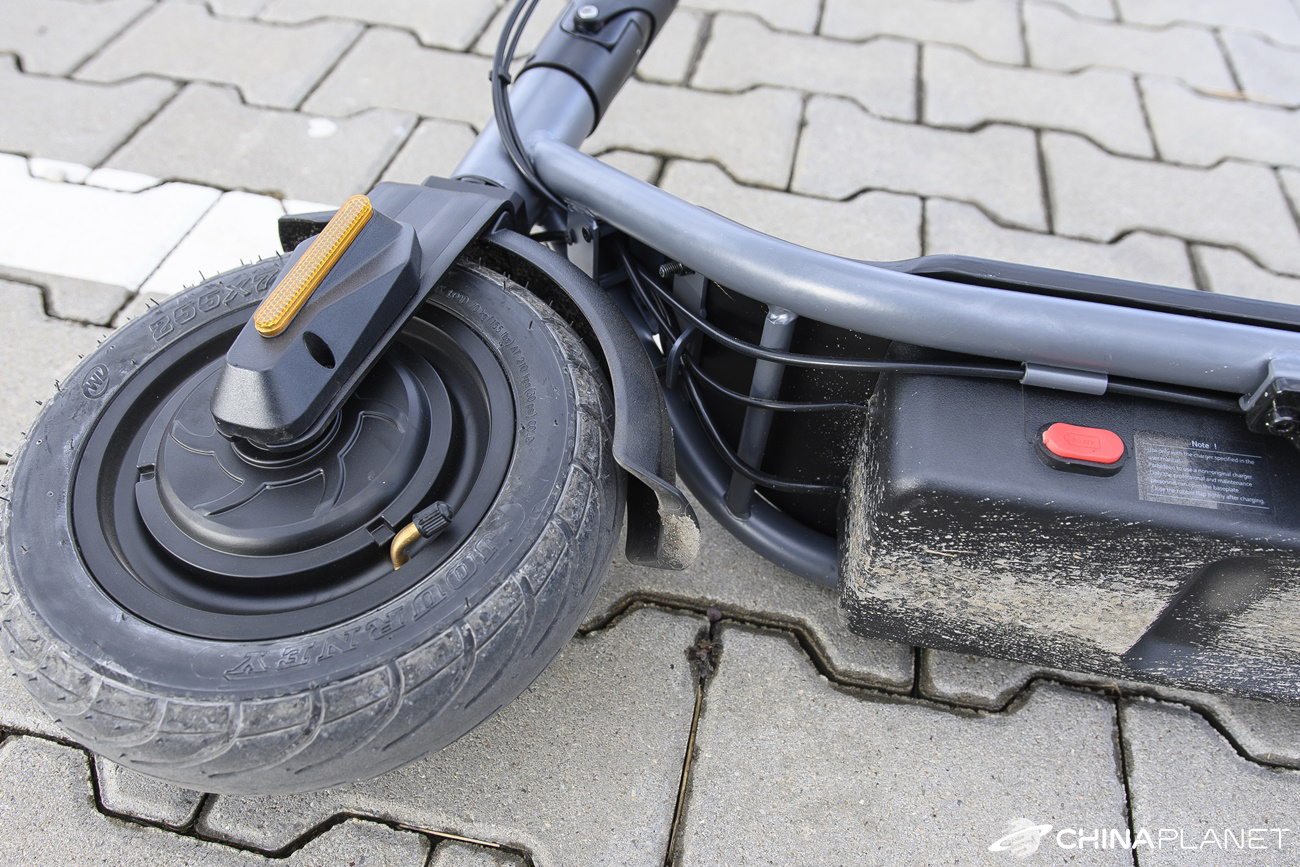 The new model of electric scooter from the HIMO brand, which bears the Max mark, does not bring many improvements. Specifically, there are only 2 differences - European certification and an improved joint of the tilting mechanism, in which a safety pin has been added, which increases the overall strength of this element. 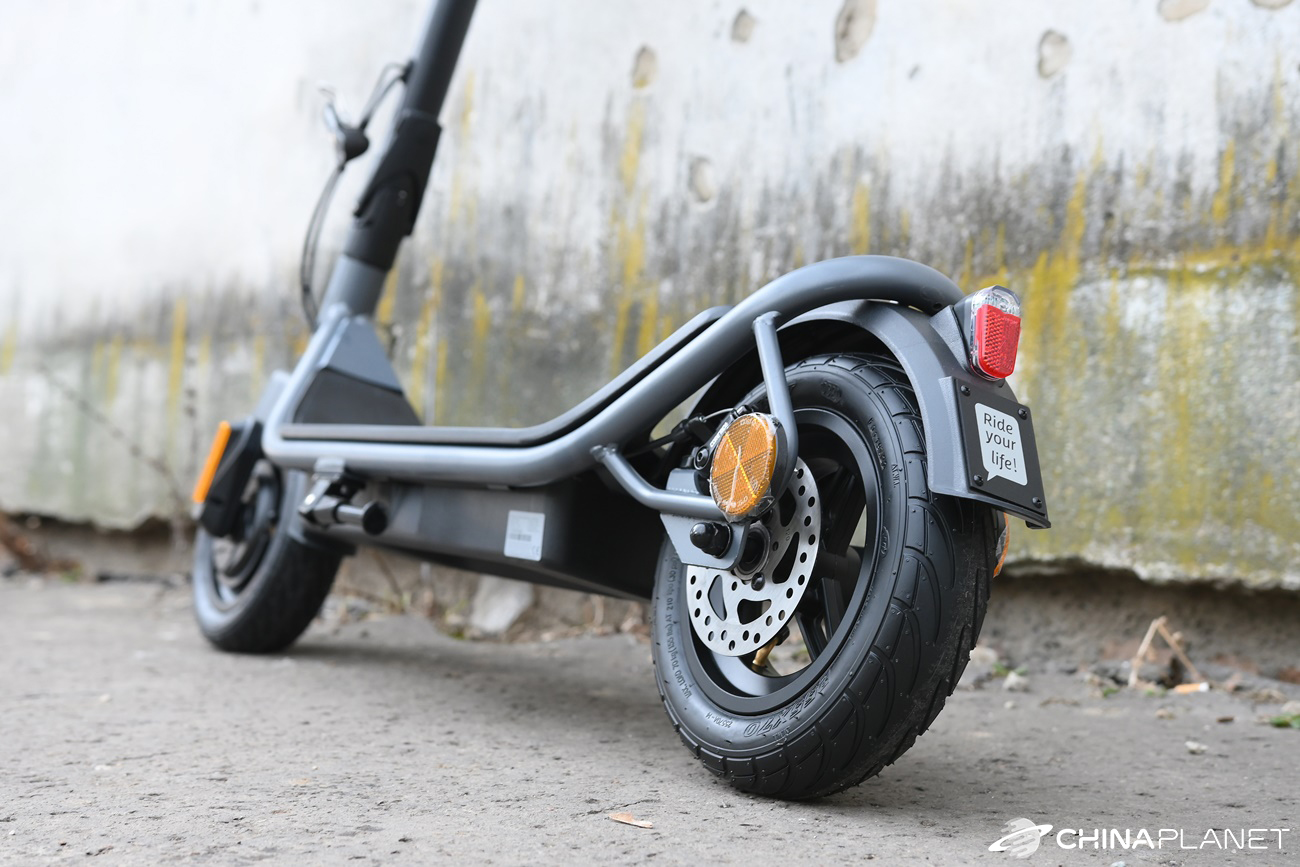 If you have an older model, there are woefully few reasons to switch to the new version, and we are honestly surprised that the manufacturer has released a new version that is almost the same as the old one. We expected something bigger from the Max attribute in the model name, whether it was a battery, a more powerful engine or bigger wheels. But we won't find any of that here. 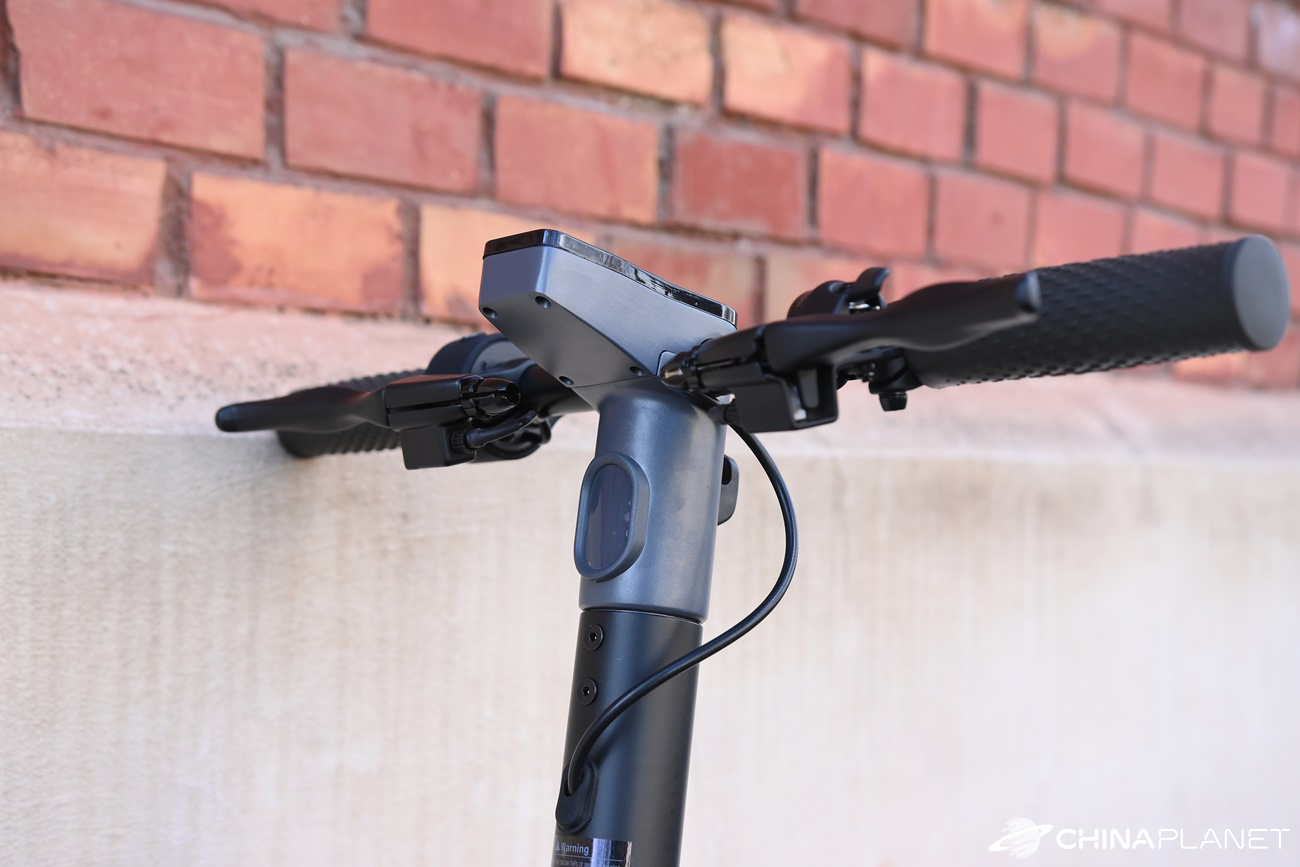 But if you are considering buying a city electric scooter, HIMO L2 Max can be a very interesting choice. 350 W of power is enough for the city and thanks to the 10 ″ wide wheels, you can walk comfortably even over broken roads and sidewalks. It will also please the high-quality metal construction, which is also suitable for taller figures and a good range on a single charge.

I want it
You are shopping for the first time at Geekbuying? See instructions!

For the first time in the EU warehouse! Kaabo Mantis King GT is the newest scooter of the brand. 70 km/h, 25 Ah Samsung battery and the best display

Proscenic M7 Pro is a great robot with a charging station, LDS navigation, 2700 Pa suction or a water container