Apple iPhone 12 vs. OnePlus 8T: Does the camera or ecosystem dominate?

Apple iPhone 12 vs. OnePlus 8T: Does the camera or ecosystem dominate?

In this comparison, we will look at a pair of new flagship smartphones Apple iPhone 12 a OnePlus 8T. Which pair will appeal to you more? It will be a wide range of cameras and a smooth Android system from the company OnePlus or, conversely, you will appreciate the ecosystem and high performance of the smartphone from the company's workshop Apple?

As they turn out in a direct comparison of the most important features, we will try to find the answer in the just starting comparative article.

* We drew information about camera comparisons and comparative photos from the portal xda-developers.com

The Apple iPhone 12 has undergone a drastic design change this year. Its aluminum side walls are matte and the hardened glass back wall is shiny after the previous generation. This time, however, the edges of the smartphone are sharper and more angular. In addition, the iPhone also offers increased resistance to water and dust with IP 68 certification. 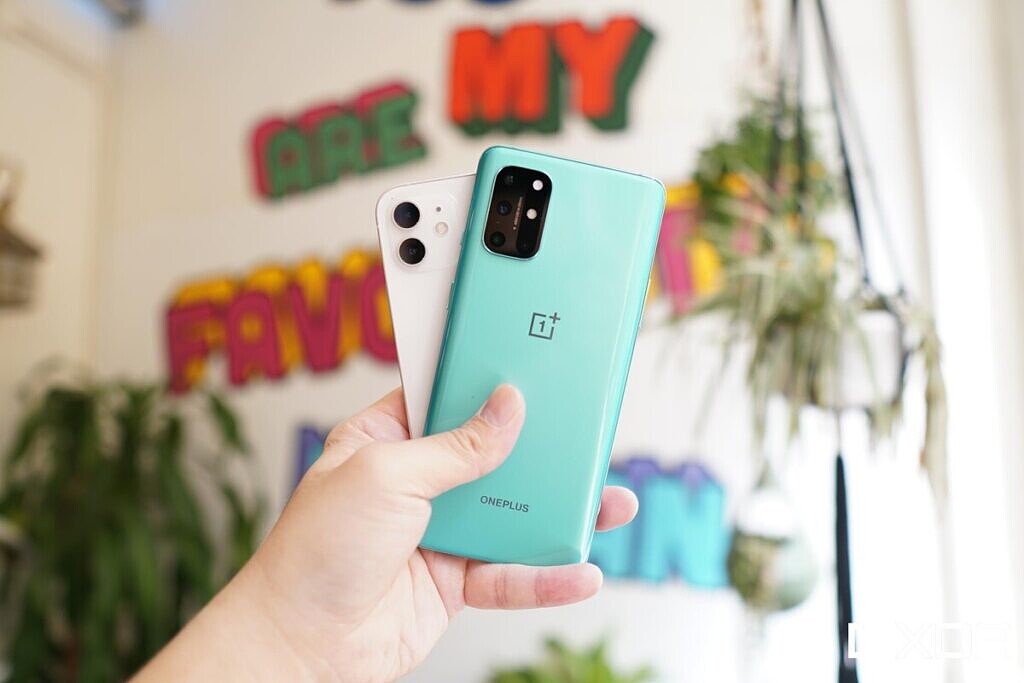 The same processing of glass and aluminum is also offered by OnePlus 8T. The back wall can be a magnet for fingerprints or other grease, if you decide to use a smartphone without a protective case.

The display panel has an iPhone with a diagonal of 6,1 ″. It is a Super Retina HDR OLED panel with a resolution of 1170 x 2532 pixels, an aspect ratio of 19,5: 9 and a final fineness of 460 ppi. In the upper part there is a wide cut-out with 3D sensors for FaceID technology and there is also ceramic glass that is more resistant to falls. 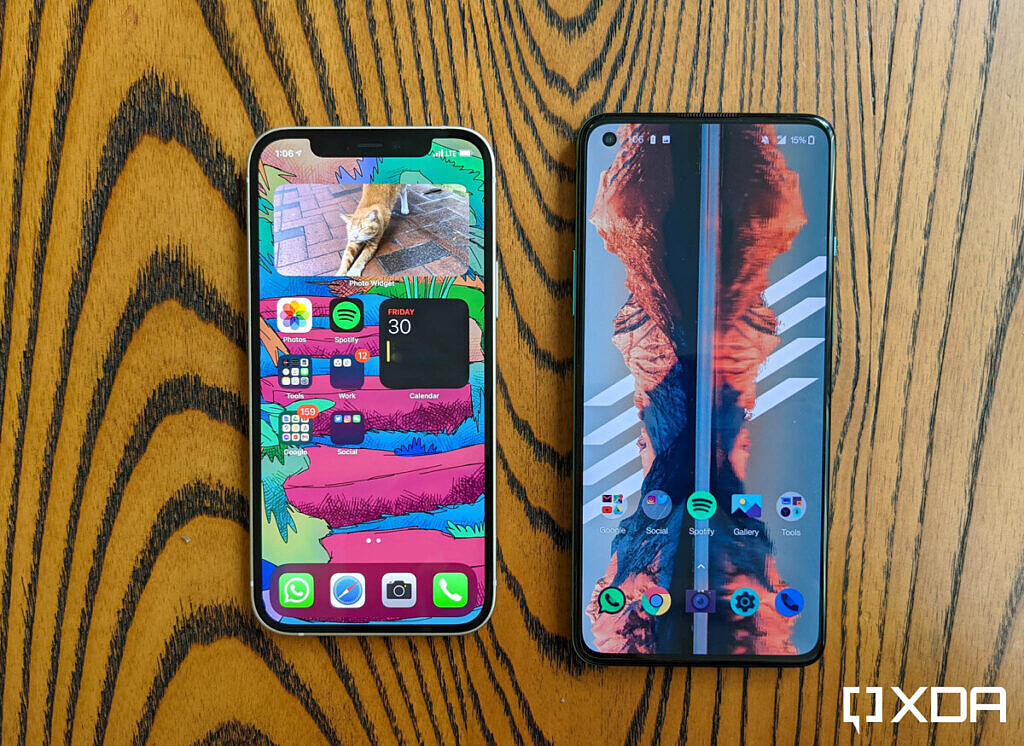 The OnePlus 8T features a 6,55 ″ Fluid AMOLED panel with a 1080 x 2400 resolution, a 20: 9 aspect ratio and a resulting fineness of 402 ppi. There is also a protective glass Gorilla Glass 5 and a shot for the front camera. Face unlocking is not as accurate as the iPhone in this case, but OnePlus offers a fingerprint reader integrated under the screen surface.

In terms of performance, we have a pair of flagship processors. Apple has officially introduced a new 12 nm six-core Apple A5 Bionic chip for its iPhone 14, which is also supplemented by a graphics chip. This smartphone can also handle demanding multitasking and graphically demanding game titles.

As for the OnePlus 8T smartphone, it contains the current flagship Qualcomm Snapdragon 865 processor made with 7 nm + technology. It is complemented by the Adreno 650 graphics chip. This smartphone is also very powerful and can handle multitasking, but in benchmark tests it lags significantly behind the iPhone 12 model.

Camera: Neither is ashamed

There can be a big difference in the equipment in terms of photographic properties. Apple offers a main 12 MPx sensor, which is complemented by a 12 MPx ultra-wide sensor. There is also a dual LED flash, support for 4K video (60 fps) or a 12 MPx front camera with 3D sensors for Face ID.

On the other hand, the OnePlus 8T offers up to four rear cameras. There is a main 48 MPx sensor, complete with a 16 MPx ultra-wide sensor, as well as a 5 MPx macro sensor and a 2 MPx depth sensor. There is a 4K video (60 fps) and a 16 MPx front camera.

Photos in good sunlight are good in both cases, but in automatic mode, OnePlus also takes photos up to a resolution of 12 MPx. The iPhone is dominated by natural and true colors, while the OnePlus has slightly sharper and more detailed photos.

On the left are again OnePlus 8T images, on the right is the iPhone 12.

The difference, however, is in poorer lighting, where the Apple smartphone, on the other hand, has a slight advantage. The wide-angle sensor will offer a sufficient angle of view in both cases, and OnePlus also uses a depth sensor. On the video side, however, the iPhone dominates again with a better dynamirange and image stabilization.

The main difference and practically the main choice in this pair of smartphones is software. While OnePlus includes the standard Android 11 system with a slight OxygenOS graphics superstructure, Apple has its own iOS operating system, which also needs less RAM at 4 GB for fast operation.

It is the closure of the iOS 14 operating system that is the main benefit or compromise for the potential user. The operating system currently also offers various widgets and application sorting or new graphics, the main advantage in this case is communication with other Apple devices and systems such as iPadOS and MacOS. This is where Apple really dominates,

However, if you choose OnePlus and an open Android system with a wide range of customization, we recommend using proven Google applications and services that can help you with a lot of synchronization and backup of your data. However, both smartphones are very fast with sufficient RAM capacity.

Just as there is a difference in RAM, a fundamental difference is noticeable in a battery. While the iPhone is equipped with a battery with a total capacity of 2815 mAh, OnePlus will offer almost double the capacity at 4500 mAh. 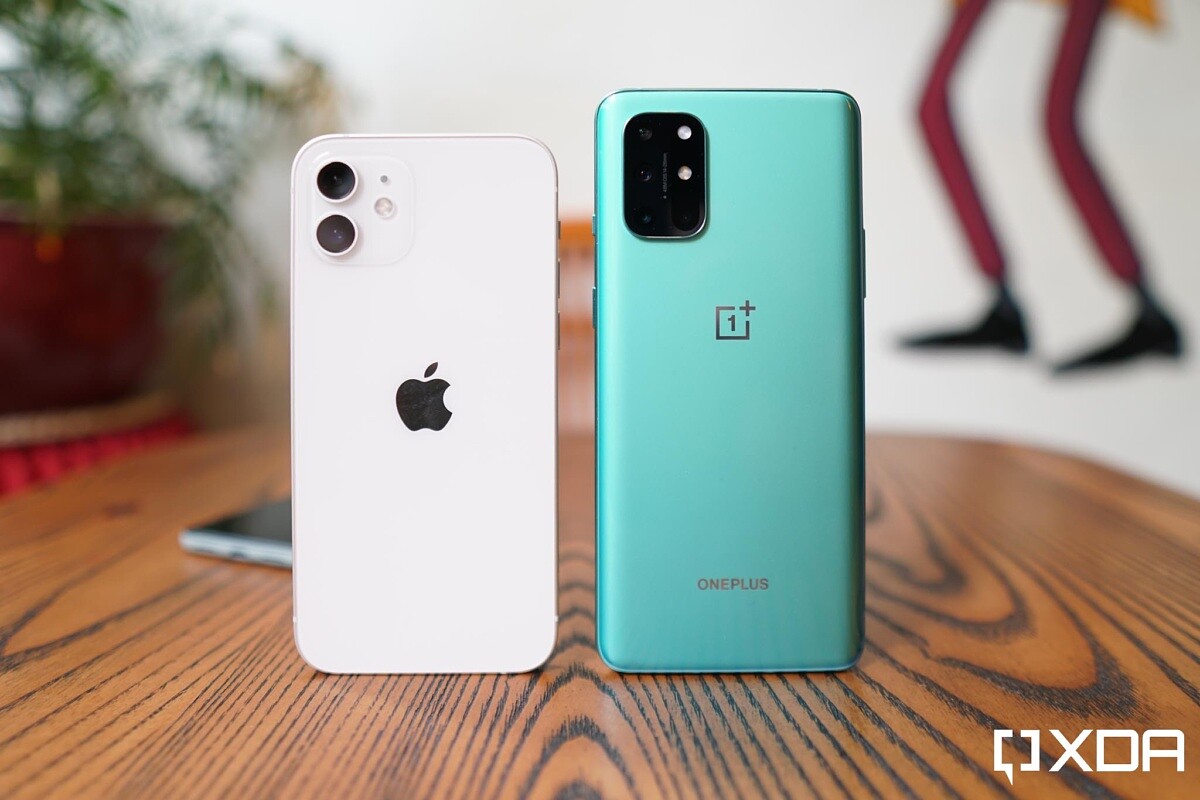 When it comes to the durability of devices using 5G connectivity, a smartphone with a higher capacity has the upper hand. The OnePlus 8T managed approximately 12 hours of use in testing, while the iPhone reported discharging after less than 10 hours of use. With the 5G network switched off and thus the use of a 4G / LTE connection, the endurance of both devices was at the level of 12 hours (with an additional 20% reserve).

Price and availability of smartphones

Regarding the price and availability of these devices on our market, local sellers offer these smartphones in official Slovak distribution. The price of the Apple iPhone 12 model starts at 899 € / $1067 and up. 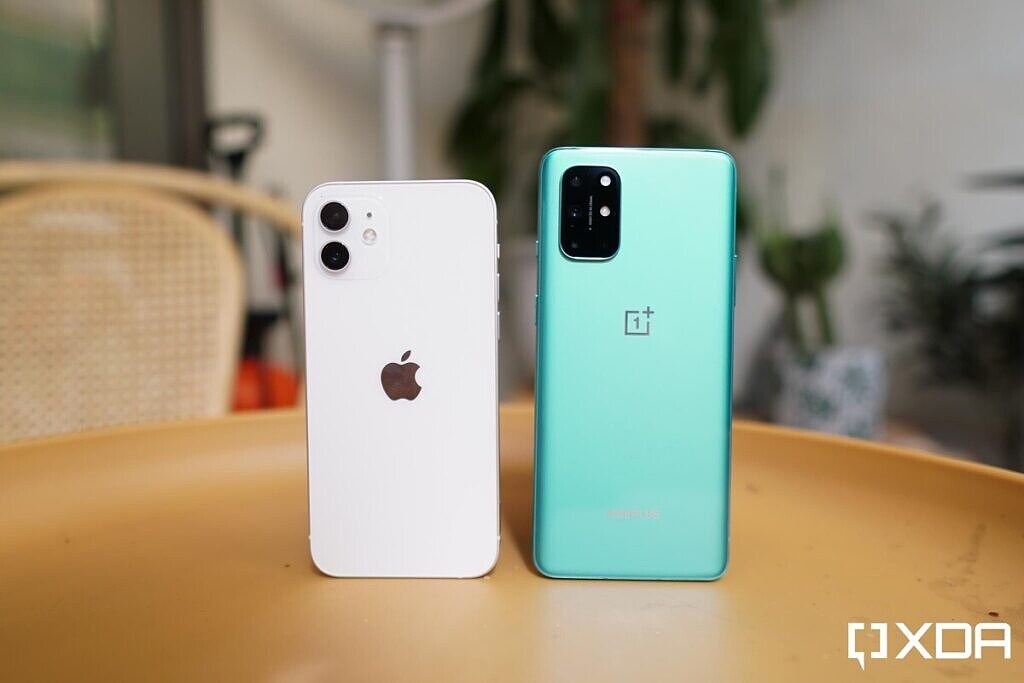 The price of the OnePlus 8T then starts at 629 € / 746 USD. However, if you want to save, the smartphone from OnePlus is also available at international retailers for as little as 500 € / USD 593. If you are interested in buying, you can find it here the most advantageous offer.

Both of the pair of these smartphones offer their future users several benefits, but also possible compromises. The basic choice in this case is the choice of operating system and subsequent data synchronization. 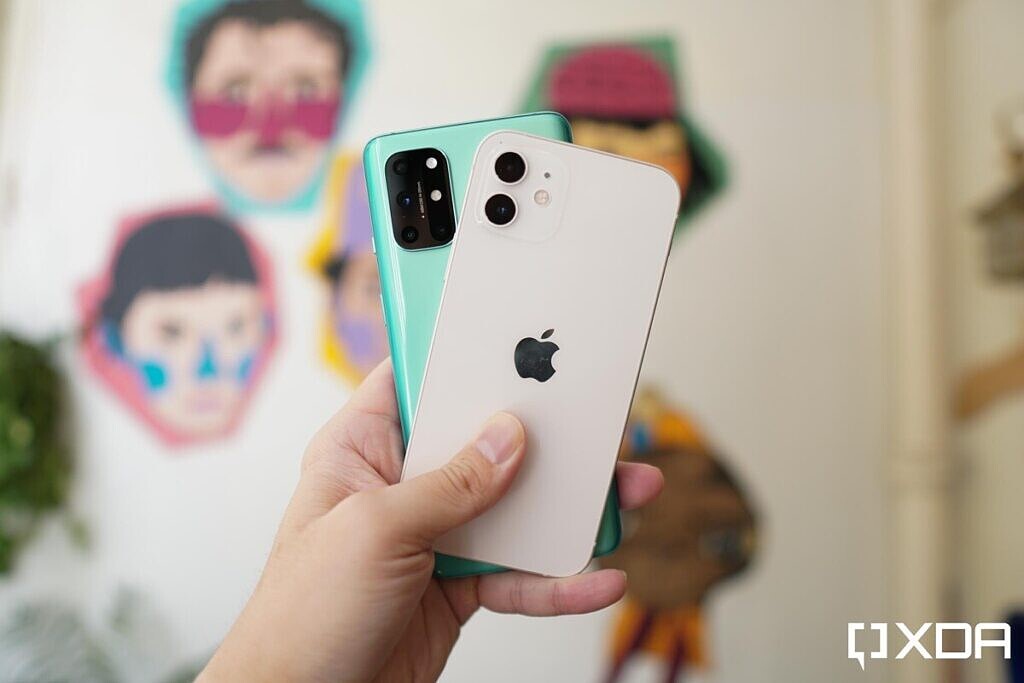 Apple dominates communication with multiple products in its own ecosystem. However, if you want to save money and bet on a cheaper Android smartphone, a very advantageous choice is the OnePlus 8T with a Fluid AMOLED display, flagship performance and four rear cameras.