These smartphones dominate the ranking in the AnTuTu Benchmark. What are the most powerful flagships and middle-class models?

AnTuTu Benchmark has regularly provided a numerical representation of the performance of our smartphones for a very long time. Every month we will see a list of the most powerful devices. In June 2020, the ranking was dominated by these flagships, respectively the next ten middle-class models.

As far as flagships are concerned, it secures the lead OPPO FIND X2 PRO, with an overall score 608 049 points. Behind him is a favorite Xiaomi Mi 10 Pro. He closes the best three OPPO Find X2, without the addition of "Pro". 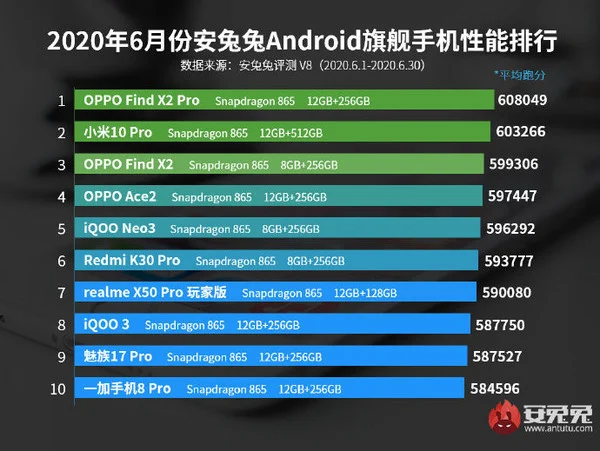 Obviously, it's a high-end processor Snapdragon 865 ensures these nice placements compared to performances. This is practically a necessary parameter when it comes to current flagship models.

The middle class can also be pleasantly surprised

Within middle-class facilities, it's a little different, but the benchmark score is often even higher than in one- to two-year-old flagships of individual companies. The smartphone secured the lead Redmi X10 Pro, thanks to the processor MediaTek Dimensity 820 5G.

Few would probably expect such a surprise. The number of points is slightly above the magic limit of 400. The second model again comes from the company's workshop OPPO. Specifically, it is about the model Reno3. He closes the best three Redmi 10X in the classic edition. 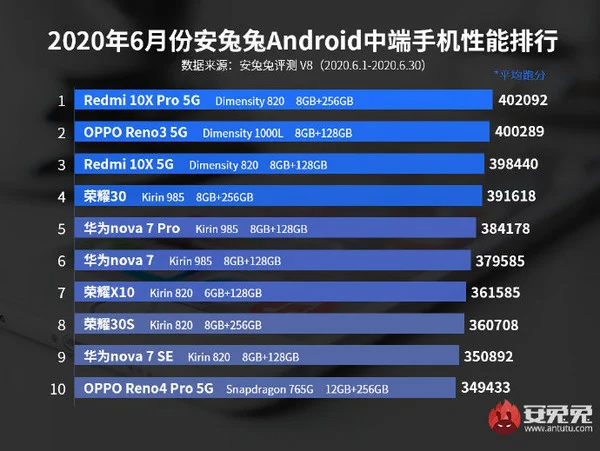 All the mentioned chips have very similar performance. The results in AnTuTu Banchmarkwhich make a difference of about 60 points.

Do you own any of the models mentioned in the document from AnTuTu Benchmark? Better said, how many points does your smartphone score in the benchmark? Boast below in the comments below the article.

A huge Honor X10 Max has been introduced. It offers a 7-inch display or Dimensity 800 processor

Huawei is adding the Bolt application to its AppGallery store. The competition for Uber is a bit bigger